I would sometime like to title a post “life lately according to my iphone pics,” but that would imply that I sometimes take photos on something other than my iphone. Which I think we all know by now I don’t. I guess there’s the rare occasion that I purchase a $5 disposable camera from Walgreens just for the hell of it, but that hasn’t happened in awhile.
Anyway, here’s a few pics from the weekend. It’s been a combination of fall and summer around Chicago with a lot of rain storms in between. 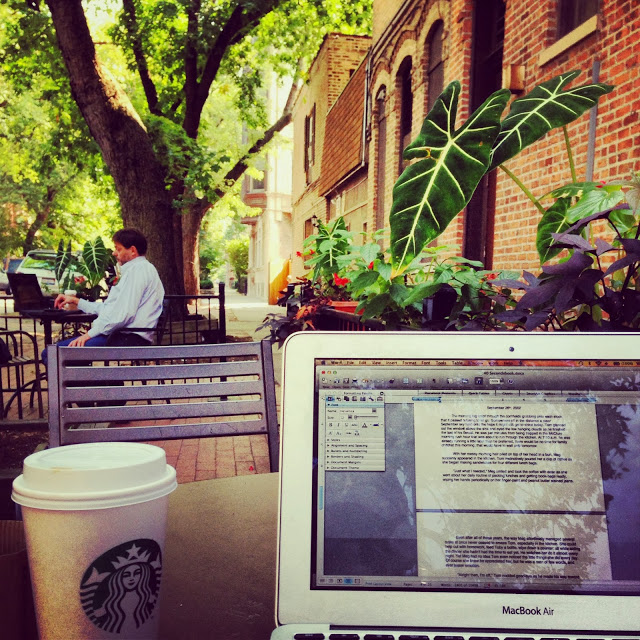 Have I mentioned before that Starbucks is my happy place? I wish I were hip enough to say I refuse to go to “commercial coffee shops” and only go to the mom and pop type places, but that would just be a lie. The fact of the matter is that I like Starbuck’s coffee, and I really like all of that dumb food they serve. Sorry, mom and pop places. 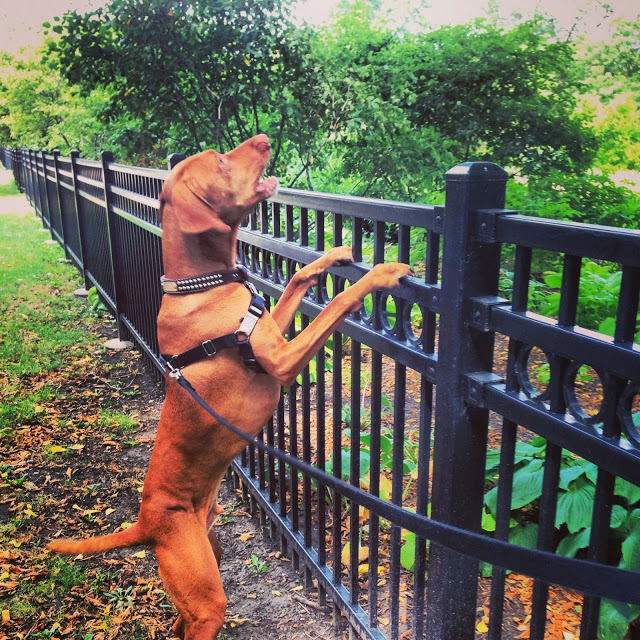 And then we’ve got Harlow chasing squirrels like he always does. 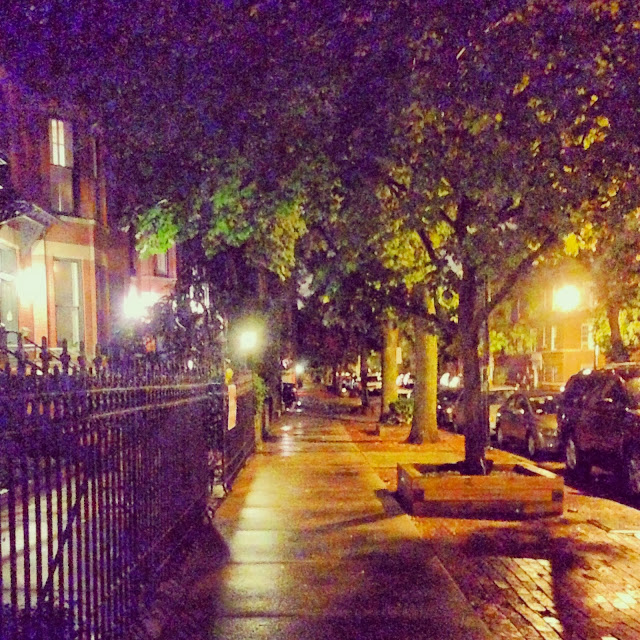 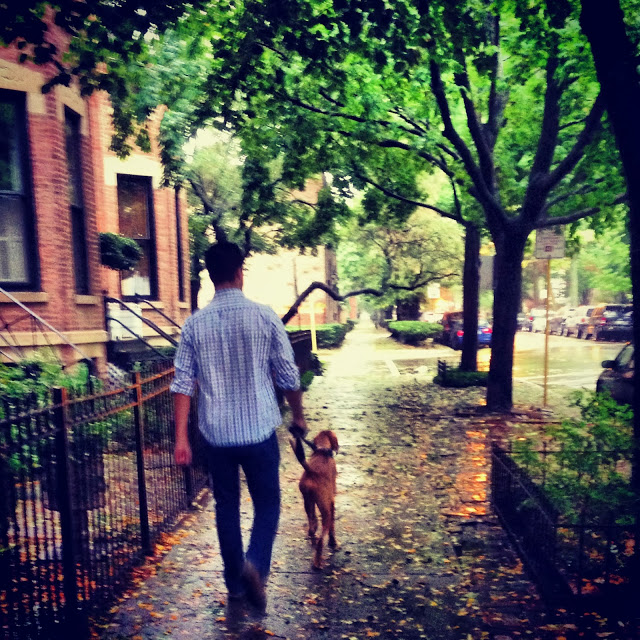 Followed by a rainy morning. 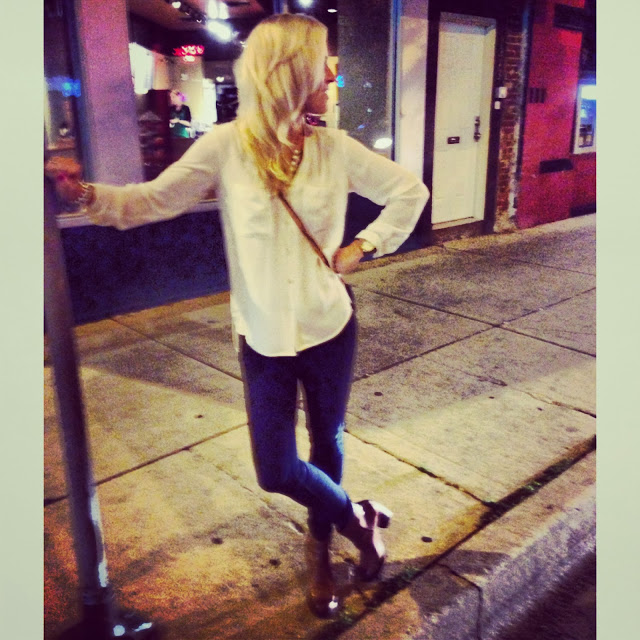 And then here I am working my corner right before we were about to head to a house party in Wrigleyville. Have you been to a house party lately where you don’t know anyone yet everyone else knows each other? It’s not as fun as one might think. The party basically consisted of all of Chris’s work friends, and don’t get me wrong they’re all really nice people and there were plenty of libations to go around as well as a very fun game of tippy cup, but I was clearly on “the outside.” And just for the record, I don’t exactly make a great attempt to make myself “on the inside” at these types of things. I wish I had the outgoing personality to jump right in and socialize with strangers like normal adults should, but instead I usually just stand in the background and daydream about being on my couch with a glass of wine and Harlow by my side. Is that bad? It probably is.
Saturday morning we ventured over to Wicker Park to discover a lesser known Husker bar called Division Ale House. 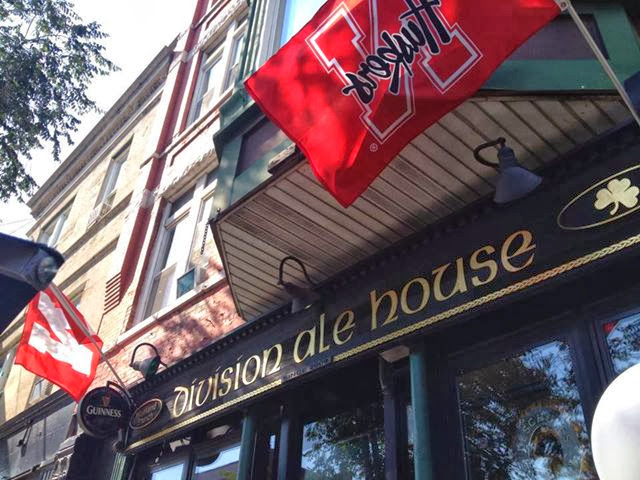 It did not disappoint. Then again, when does brunch with bottomless bloodys and mimosas for only $20 ever disappoint? Never. It was also a good change-up from going to the other Husker bar in the city, Kirkwood. Kirkwood is like college spring break for adult Husker fans every single Saturday- and sometimes it’s just a little much for me. 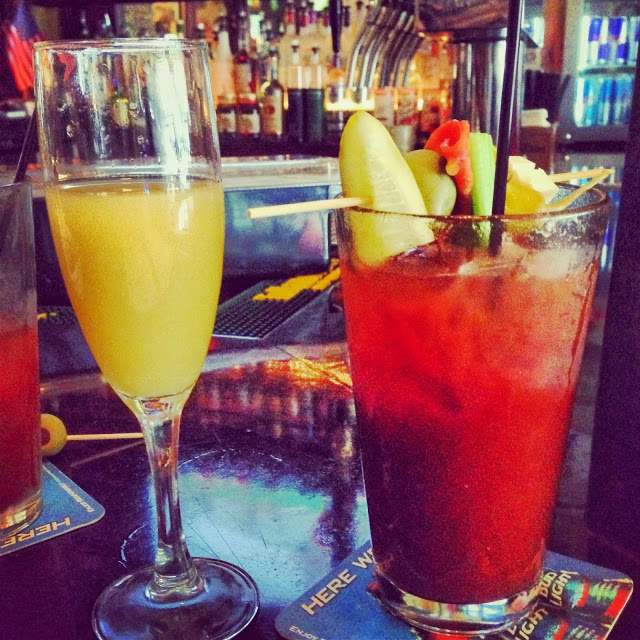 Because we’re not as young and crazy as we used to be, following the game we immediately went home to end the night with burgers and lobster fries from Edzos, eaten from the comfort of our own couch. It was just perfect. 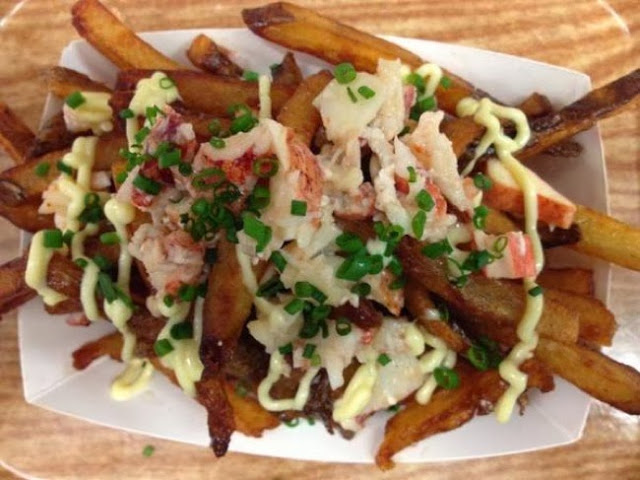 And like I say every Monday, I seriously need to eat better this week. I think I woke up with three chins on Sunday morning. It’s just so damn hard when you live in a city with so much good food.  Like pho (pronounced “fuh.”) Am I the only pho addict? I can’t get enough of this Vietnamese soup lately. It’s going to be my go-to all winter long, I can already tell. 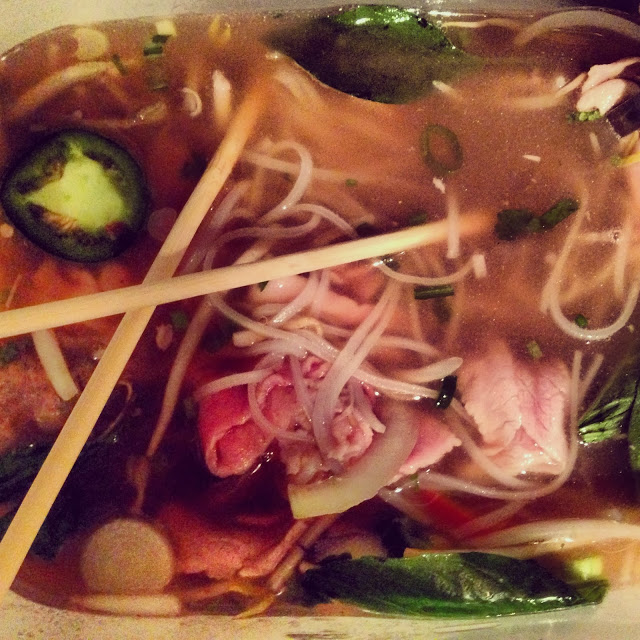 We picked some up for dinner last night at our favorite Vietnamese restaurant around the corner just in time to catch the Bears game. 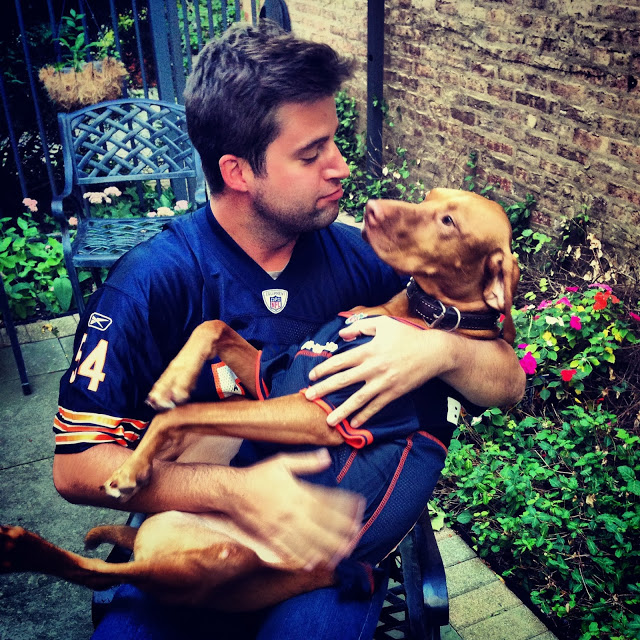 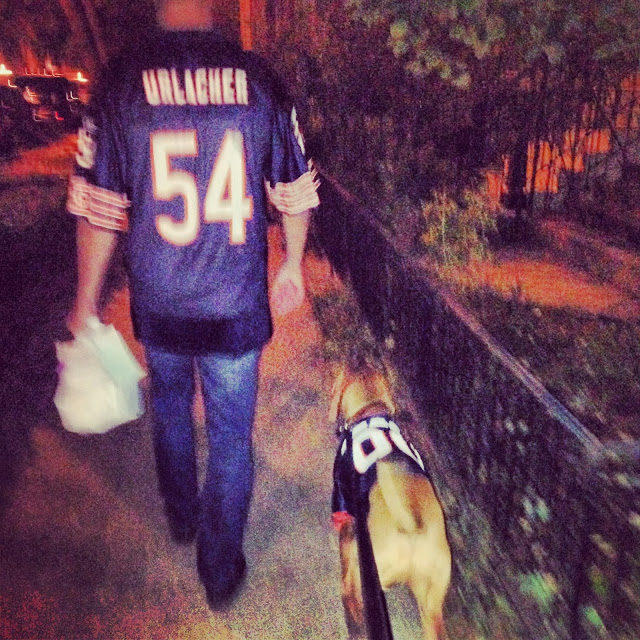 I really love this photo. Aren’t they just the cutest? 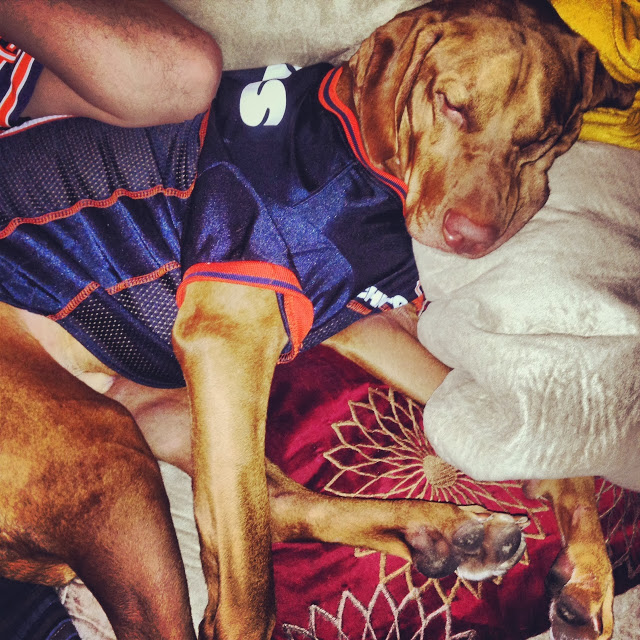 Harlow had a busy day chasing squirrels, so as you can see he barely made it to the third quarter.

I also had an audition Sunday evening that I’m still waiting to hear back on… It was okay, but you just never know with auditions. At least I didn’t start fake tap dancing like I did at an audition a few weeks ago (I didn’t get that part from a few weeks ago by the way.) I’m not sure if my fake tapping lost me the part, or if it was the moment when I panicked and suddenly tried to play a one armed, one legged, one eyed crazy lady… It’s still up for debate, because otherwise I’m sure I nailed it! 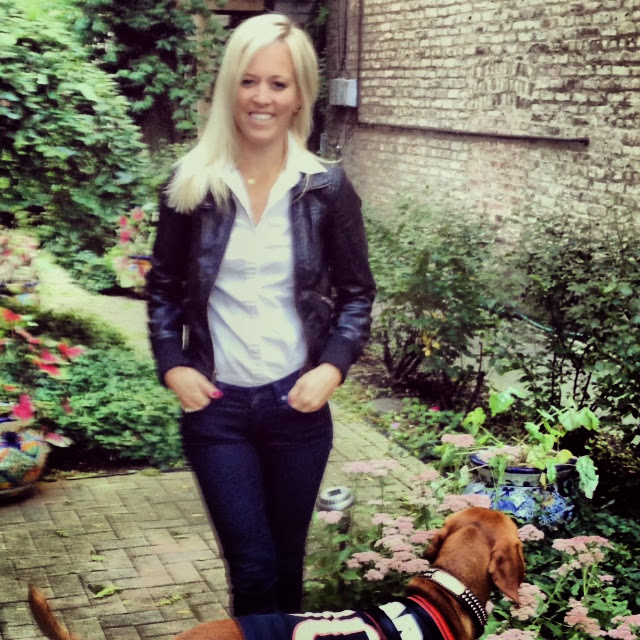 This is my “I’m trying to pretend I’m not nervous for this audition” look. Do you think I pulled it off? And yes, I’m aware this photo is a little blurry. But on a Sunday night after I’ve spent the past few days eating pounds of lobster fries and burgers, I prefer a little blurry, it’s more flattering than clear.
And that was my weekend.
Now because I’m feeling generous I’ve teamed up with a group of fellow bloggers to offer one lucky reader a pretty nice bundle of prizes. This fantastic prize package includes $290 for flights (can be used towards any flight within the US), a $250 Visa Gift Card (for some extra spending money!) and $100 KiKi La’Rue Store Credit (everyone needs a fab new outfit to wear on vacation!)

For your chance to win, simply enter using the Rafflecopter below! Tell me… where would you go?