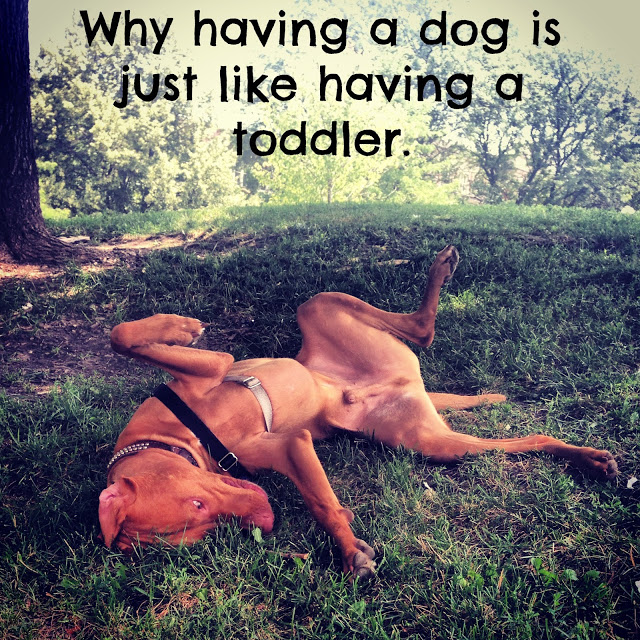 Today’s post is brought to you by Harlow, because while I love this dog very very much, sometimes he drives me absolutely crazy. I’ll admit, there are perks to having a dog in a city, like the fact he goes almost everywhere with me because most stores are incredibly dog friendly, some bars as well. But having a dog in the city is also a lot of work. Because we have no yard, or grass in sight. And so I take him on roughly nineteen walks a day. At least. Three of which must be off leash. One of which must be at the beach. God, he’s a diva. I feel pathetic just admitting that, and also a little relieved. My name is Taylor, and my dog runs my life. There I said it. 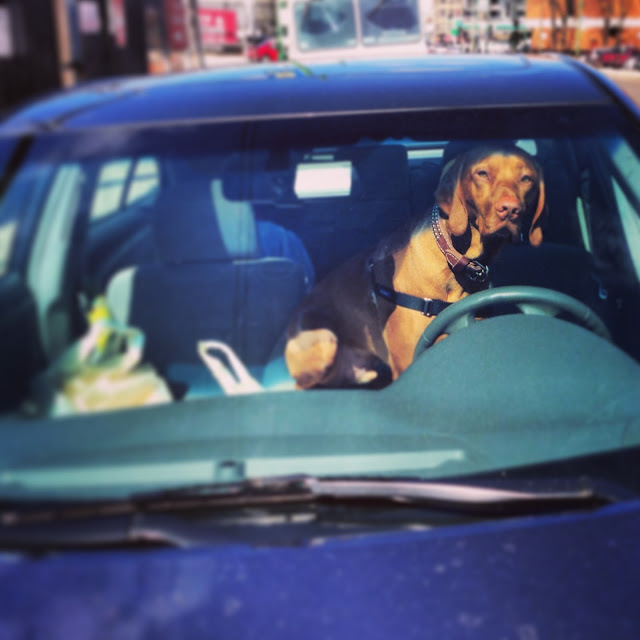 He’s glaring at me because I wouldn’t take him into Target. He was livid. You would have thought I was leaving him in Alcatraz.
I only have time to write this out at the moment because he’s napping, so this is my window to get stuff done. Thus I bring to you, why having a dog is just like having a toddler. But what I really mean is why having a Harlow is just like having a toddler. Because I realize not all dogs are as needy or demanding as mine. I just got lucky. 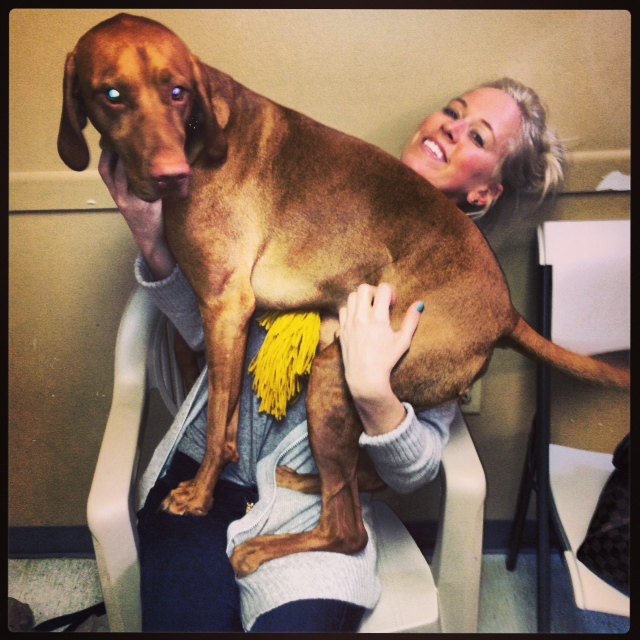 1. When he naps I run around the house trying to get as much done as possible. I blog, I write, I send work emails, I make work phone calls, I get so much done in this window of time it’s amazing. It’s as if I’m in microwave mode- you know the mode when you have thirty-forty five seconds to get as much done in the kitchen as possible until your food is ready. If I approached everyday in microwave mode I think I could take over the world. 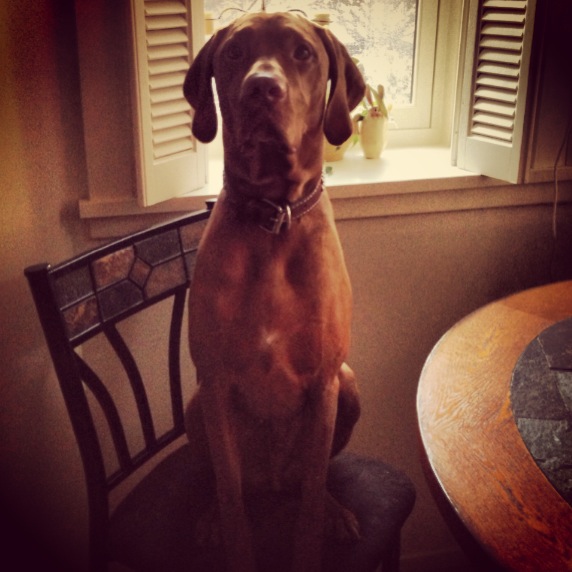 At this point I’m actually working on the floor because he kicked me out of my chair.
2. When he’s awake, I’ll do almost anything to appease him. And by this I mean more times than not you can find me working on my computer, sitting on a stool at a hightop table, with Harlow on my lap. Harlow weighs about sixty five pounds. 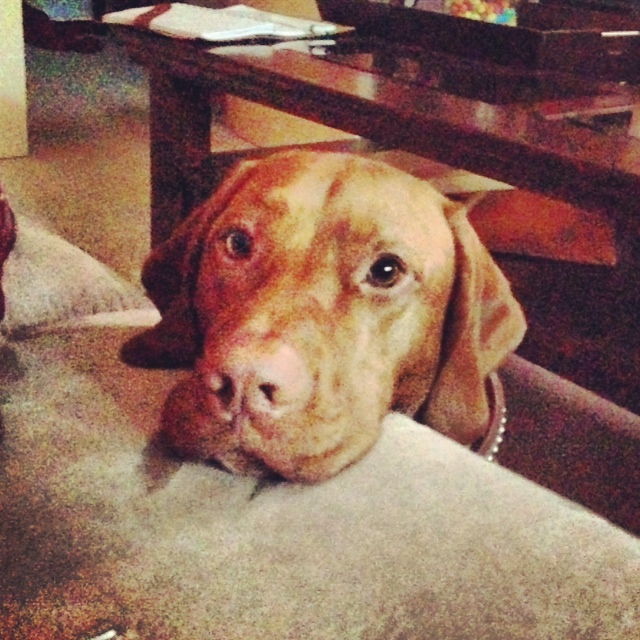 This is his whine face.
3. Because he whines. all. the. time. But only in front of me. Never in front of guests or friends, he only pulls this crap on me. And I don’t get it. He’s like a demanding little two year old, but only with the person he should be the best behaved in front of, me obviously. One minute he’s jumping and begging to play with his rope and no less than two minutes later he is sound asleep. His mood swings are so impressive to me I sometimes wonder if he’s bipolar. 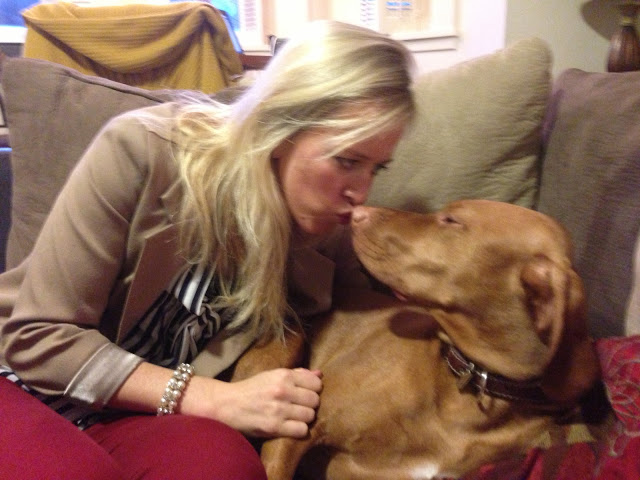 If you’re reading this and shaking your head thinking I’m a complete pushover you’re wrong, I’ll hold my ground with anyone. Anyone except Harlow. It’s just so damn hard to get work done with a dog constantly whining at your side to go play. 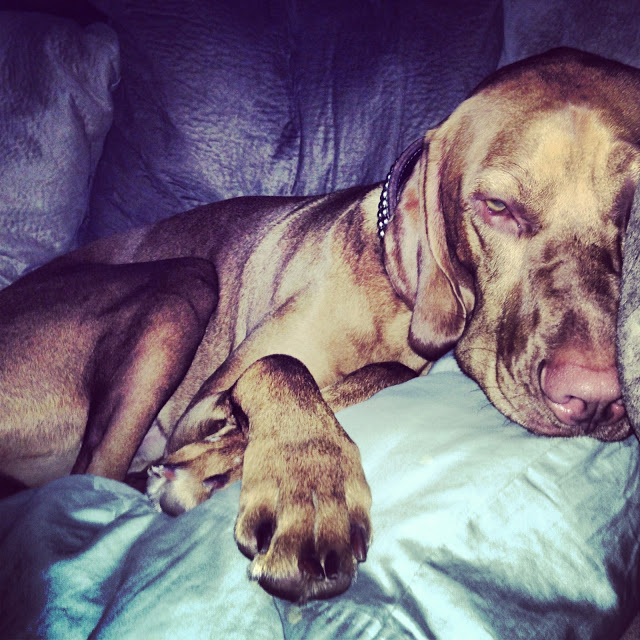 4. But he’s always on his best behavior when “dad” comes home. Chris will walk in the door and Harlow will greet him with a smile on his face and wagging tail and then proceed to just relax on the couch the rest of the night. Then Chris will usually remark something like, “you know Harlow’s gotten a lot more chill lately.” And I want to scream. He’s chill because I’ve been wearing him out for the past seven hours. 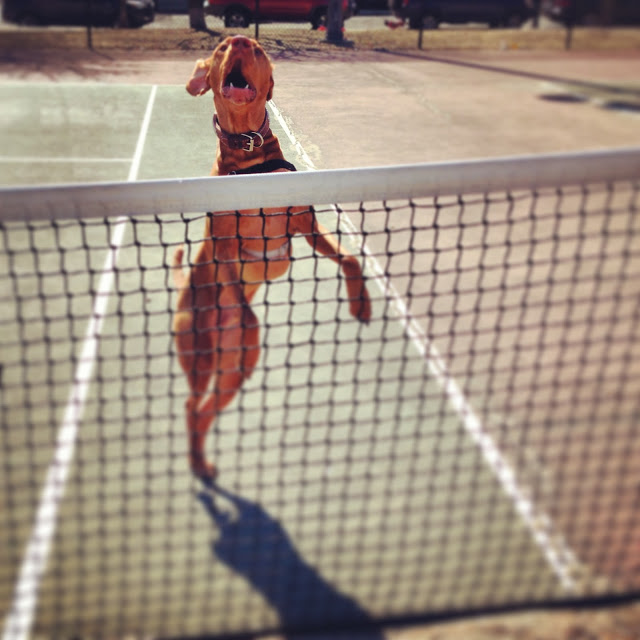 Don’t ever beat him in tennis. He freaks out.
5. He does things to embarrass me in public. He loves to steal other dogs’ toys at the dog park and then run from me as the other owners look on at the poor girl chasing her out-of-control-dog. It’s seriously his favorite game. I feel like people give me the “crying child on an airplane look.” His other favorite thing is to go #2 in the worst possible places, like crosswalks at a busy intersection, or on a huge rock where children often play. Or on a bike. He does it anywhere.
And it’s always good to wrap up a post on #2 talk.
But seriously, Har’s my bestie. I don’t know what I’d do without that bossy guy in my life. Probably a lot more work I assume. 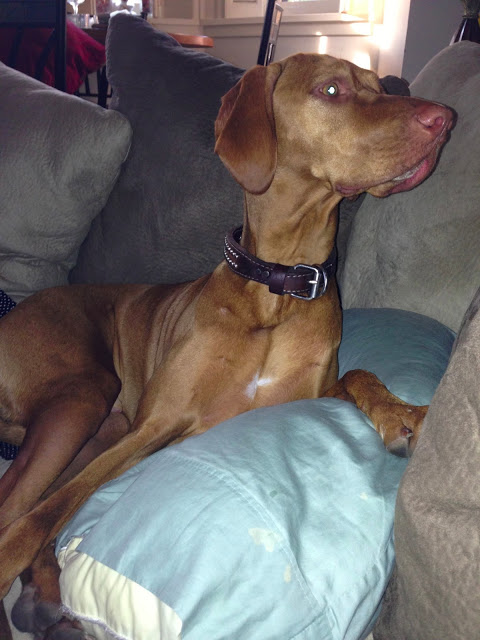 I like this photo because I think Harlow looks like an Avatar. Or maybe just Chris Bosh. You decide.