As of two minutes ago I just made a donation to the ASPCA for $345 because of all of you! That just makes me so very happy. So thank you all so much who were able to give, sending nearly $350 to help animals felt pretty good this morning. And if any other donations continue to come through they will immediately be sent to ASPCA, as well. I know the money will probably be spent on important things like medical treatments or making sure the facility is fully equipped, but this morning as I gave Harlow his breakfast of Greek yogurt and blueberries I imagined that it would be nice if there was a gourmet food fund where all of the abused dogs would get to try steaks for the first time in their life. And that’s why I’m not in charge of allocating the donation money… But someday when I start the Harlow Foundation for abandoned and rescued dogs, there will be a gourmet food fund. There certainly will.

On another note, is anyone else feeling this August heat wave rolling through? It’s as if August suddenly felt guilty for being so random in the beginning that it finally decided to throw all the scorching temps and high humidity into the last four days as intensely as it possibly could. Chicago has been in the high 90s all week long. To be quite honest, I don’t mind the hot temps (unless I have to take public transportation for the day.) Harlow, on the other hand, isn’t too fond of them. 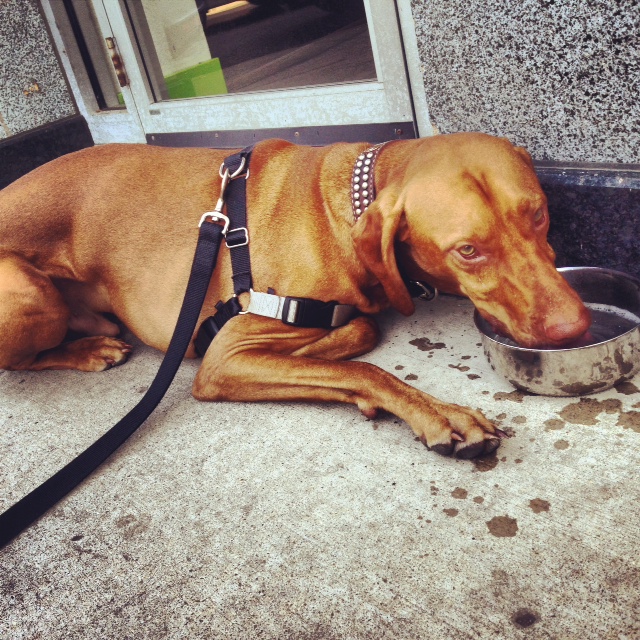 When he spotted a public water bowl yesterday on our walk he plopped down with his head in the bowl and refused to move. At one point he was actually lying there with his snout under the water just blowing bubbles. And that’s why I refuse to drink from public water bowls…

I finally got him up and we walked just a little further to the pond lookout. He stood like this for about five minutes looking at God knows what. 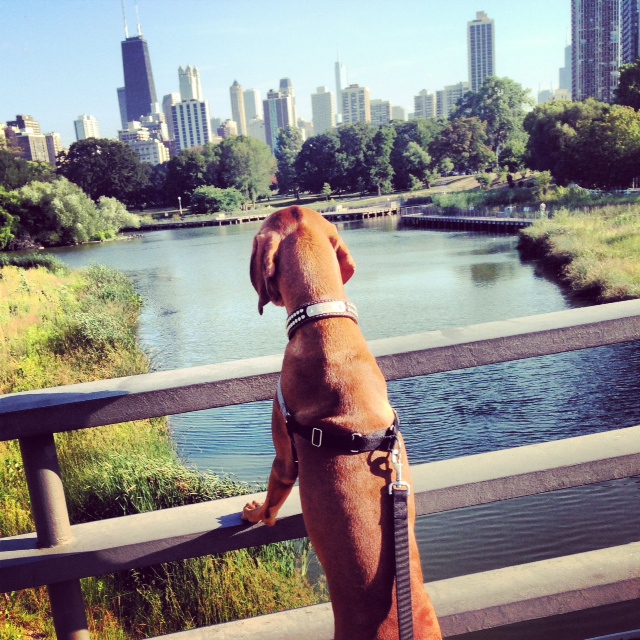 I don’t know if he saw ducks or fish or squirrels, regardless, people passing by got quite the kick out of Harlow posed like this. Then again, perhaps he was just admiring the skyline? Har loves Chicago as much as I do.

Today is one of those days where I’m feeling a bit scatter brained because I have a lot to do, but no idea where to start. So instead I’ve chosen to take far too long writing this one, pretty short, pretty uneventful post. I think I’m distracted on account of Saturday. You know, the first Nebraska football game of the year. It’s always a special time for me. But I’ll save this talk for tomorrow.