I’d intended to write a nice little ditty today about what a wonderful weekend it was spent at my good friend, Steph Metzler’s (formerly known as Pohlman) wedding. And that will still come, don’t get me wrong. It’s just that at the moment I am fighting a battle I just can’t win. It seems the Mothman Prophecies have come true, and I’m in the thick of it. Chris and I returned from a grueling eight hour (and slightly hungover) drive yesterday evening to find that our apartment has been overtaken by moths. Lots and lots of them. Luckily they’re not entirely big, they’re actually quite small. The size of sunflower seeds really, but what they lack in size, they make up for in depth. I am fighting an army here you guys, their bench must be one hundred deep. Every time I kill thirty (and I’m not exaggerating with that number) forty more show up. It’s seriously the most disgusting thing ever.
And so I have spent the morning cleaning and bagging up all of our clothes, because those little dusty devils have good taste. I didn’t find a single one on any of my cheap sweaters, but of course they found the one Tory Burch sweater I own and they jumped all over it. Thankfully I think I saved Tory before any real damage could be done. But still.
Google suggested I purchase some mothballs. But from what I’ve gathered mothballs don’t exactly smell too nice, and I know this only because the mean kids in elementary used to occasionally taunt a girl in my class and tell her she smelled like mothballs. Kids can be so cruel. But I figured they couldn’t be that bad so I marched to Walgreens today in hopes of finding a solution. I found two boxes of mothballs, one was called “old fashioned” mothballs, and the other was “modern cedar scented.” Naturally, I picked up the old fashioned box first and took a big old whiff anxious to see if the scent was really as bad as everyone said. And holy hell was it bad. And it was also somewhat reminiscent… Would you believe it’s taken me twenty six years to correctly identify what it is my sweet great grandmother Grace’s house used to smell like? Mothballs. She’s one hundred now and no longer lives in that house, but I had a bit of an epiphany today when I smelled that box. I went, ohmygosh this smells like grandma. I also went, ohmygosh I was probably mothball girl in elementary. This entire time I thought it was Nicole Foltz, but in reality I was the stinky kid who had just come from breakfast at grandma’s.
To make my morning even better today, when Chris left for work I was in the midst of chasing the moths down with a vacuum hose so I didn’t hear our alarm go off. I heard it once it went into 9-11 mode which is the loudest most terrifying sound ever, but once I shut it off I went right back to vacuuming the walls like the crazy old lady I am and therefore did not hear when the alarm company immediately called to make sure I wasn’t being murdered. Within three minutes three Chicago police vehicles were outside of my house and six police officers. Talk about service! And did I mention I was vacuuming in my bathrobe?
I apologized profusely for the false alarm (I think this is only the 9th time it’s happened to me…) and tried to explain to them I was all out of sorts on account of the moths. And as I stood in my doorway with my hair still wet while only dressed in my bathrobe, Converse sneakers on my feet (they were the first shoes I could find by the door) and my vacuum hose in hand, I could see they felt very bad for me and “the moths” that I explained were attacking me…
So as you can see I clearly have no time to write about the wedding today and do it justice so that will have to wait until later today, or possibly tomorrow. There’s just too many good photos to post and an explanation will need to be given as to why I woke up with jello-shot residue on my forehead and a purse that was missing my wallet, keys, and most importantly the photo strip from the photo booth.
Here’s a clue: the photo strip was eventually found. But perhaps it shouldn’t have been. 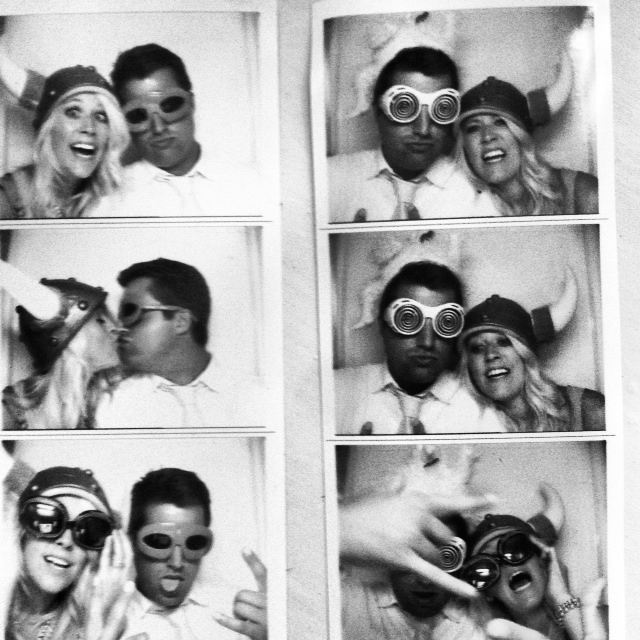 What can I say? Chris and I just really love weddings.