So let me tell you a little bit about my Christmas Tree. 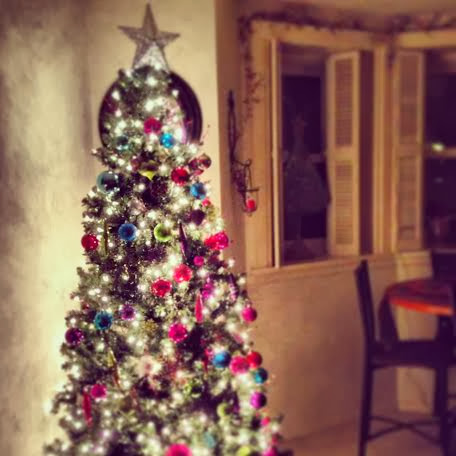 She’s not fancy, she wasn’t expensive, and each year more and more of her artificial pine needles continue to fall off. But we’ve been through a lot together her and I, and that’s really all that matters.

She came into my life somewhat un-expectantly actually (as most of the best things in my life often do) about four years ago on a cold night in Topeka, Kansas. Remember how I said she wasn’t fancy? Well there’s your proof. Believe it of not she’s a Wal-Mart born tree, and from Topeker no less. But I don’t judge her for it.

Why we were in Wal-Mart in the first place I can’t really remember, but it must have been a good reason because I avoided that store like the Peker plague. But we were headed out the door when what to our wondering eye should appear? But a fang toothed woman from Westboro Baptist Church wearing a sign that read “Satan Claus” and “Xmas is for Fags” standing just outside the entrance. And that was enough to make me buy the first Christmas tree we saw on the spot just so I could carry it out proudly in front of the she-devil from Westboro. Had I been able to wrap the tree in a rainbow flag I would have done so as well.

Chris worked pretty long days back then and the Topekans didn’t exactly welcome me with open arms, so many nights were spent alone on the couch, just Tree and me basking in her glow. Of course there was a little puppy by the name of Harlow who was there as well, although he spent most of his time just trying to tear off every ornament he could reach while pulling roughly on her branches, but Tree didn’t care.

Within just a years time, so much had already changed when I brought her out again. The puppy was a now a dog, and the city was now Chicago. And with that change came a bit of a smaller space. We were no longer living like rich folk in a three bedroom house in Kansas, but now had to stick Tree in the corner of a small apartment in Chicago, but she didn’t seem to mind. Her purpose remained the same. 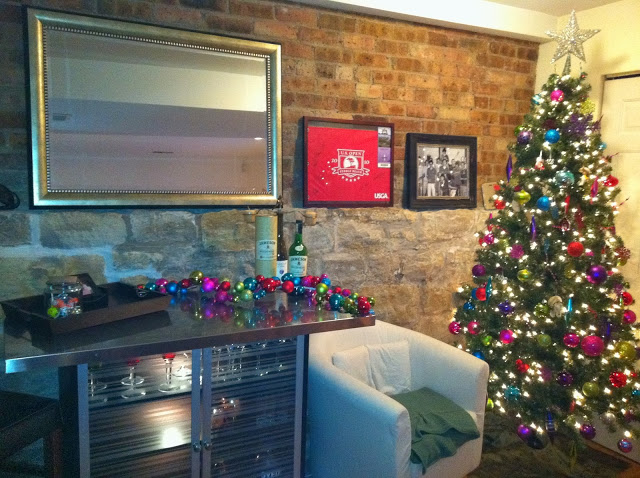 Fast forward another year and just one day after I took Tree out for her third season yet another life change would occur. It came in the form of a phone call from my former boss telling me the company was “restructuring,” but unfortunately I wasn’t a part of said restructure. That was a pretty hard blow for me because I actually liked that job and I knew that was rare to come by, especially at my age. After that call, before I wrapped myself in a blanket and spent the day on the couch feeling pretty damn sorry for myself, I texted my parents, “just got let go. please don’t call me for a few hours.” I was at that point where I knew if I so much as opened my mouth big ugly cries would could snorting out.  I might have laid there in my own self pity all night had it not been for Tree. As if on cue, she suddenly lit up telling me to get my butt off the couch and make the best of my situation and stop acting like such a little pansy. *it actually was on cue, because I use timers on my lights. But I took it as a sign never the less. And speaking of Christmas light timers, are those things created by magicians or what? Or am I the only idiot who can never seem to figure them out… And ps that company I worked for has since gone under for good. And I know I shouldn’t be happy about such a thing, but I am.

Anyway, here we are today. Yet another holiday season is upon us and it is finally time for Tree to come out of hiding and see once again what has changed over the past year. Chris has a mustache now, so that’s new. And Harlow has a few white hairs on his chin that sprouted up out of nowhere, but I like them because I think they make him look distinguished. And as for me, well from last year at this time until now I think the most noticeable difference is that I simply feel more fulfilled. Of course Tree will notice I still feel absolutely lost on a daily basis, but yet somehow I have a sense of ease knowing I’m at least going in the right direction… I hope so, anway.

As I took Tree out of her box last night I saw her bottom limb hung lower than usual. And I’m sad to say she lost quite a few more faux pine needles over the past year. But she’s hanging in there. She always seems to come alive when I hang certain ornaments on her, like the photo of baby Harlow with the stocking cap on and the caption “Puppy’s First Christmas 2010.” And then there’s the furry little Nutcracker from my mom that she purchased when she, my sister, and I saw it live in Kansas City before going out to a drag show after. And I can’t forget the glitzy pearl snowflake ornament that my dad gave me two Christmas’s ago and my mom yelled at him for because she thought they were too expensive. Those are some of Tree’s favorites. Mine too.

And that’s a little bit about my Christmas Tree. She’s certainly not as tall or as fancy as the others I’ve seen, but for right now in my life, she’s just about right.