For the past week or so Chicago has been getting pounded with rain. And I love a good afternoon thunderstorm, at least that’s what I was thinking to myself the other day when one had passed and I was heading out the door and taking a short cut through the alley when I happened to pass a giant dead rat floating in one of the puddles… I shrugged it off and continued on my way.

Rats disgust me, don’t get me wrong, but there such a common occurrence here I hardly even notice them anymore. And that might disgust me even more.

Chicago is second only to New York when it comes to rat population in the U.S. ( I know because I looked it up.) At night they are are lurking behind every dumpster and scattering down every alley. And I suppose it doesn’t help that we live right next to numerous bars and restaurants… The worst is when I come home late from a comedy show and have to brave the alley alone. I am far more scared of rats than I am of murders.

I’d always heard that cities have rats, but I didn’t realize the extent of it until I moved to Chicago. Which brings me to today’s post: 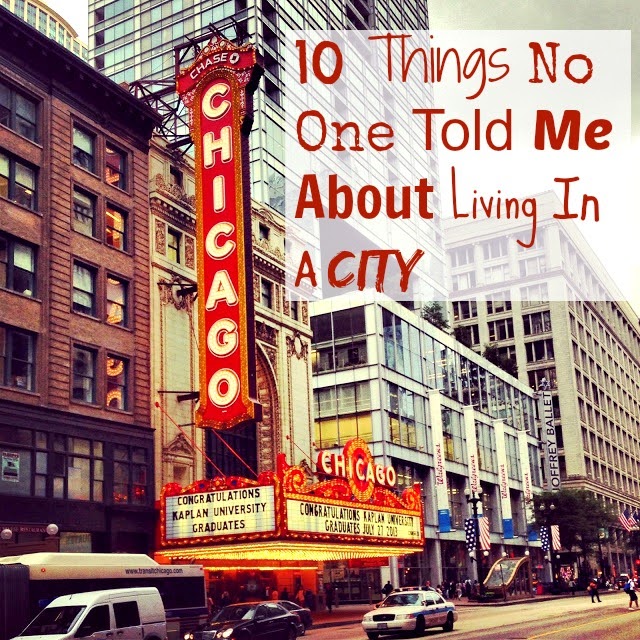 1. Rats are more common than squirrels.
Never walk down a dark alley alone at night, not because it’s dangerous, because it’s disgusting. I once took out our trash after dark and opened our trash bin and… you guessed it, a rat jumped out. I will never make that mistake again.

2. Pools don’t exist.
This one was especially hard for me my first summer. I grew up in Nebraska, public and private pools were everywhere. Now I’ve just accepted the fact I get to be in a pool twice a year and that’s it.

3. Everyone flocks to the parks.
Because of the lack of backyards (and pools I imagine) the parks are always full in the summer. At first when I saw gals just lying their bikinis on the public grass areas on a Tuesday afternoon I was a little skeptical. Nobody does that in Nebraska. But soon enough I followed course (in jean shorts and a tank top, never a bikini. I just can’t.)

4. In-unit washer and dryers don’t exist.
Well they do, I just can’t afford the places that have them. Right now we have a communal unit in our basement that we share with six other people and I kind of hate it. Not only is the basement the type of place you would take kidnapped children, but the people we share it with think it’s fun to leave their wet clothes in the washer for five days.

5. Getting groceries is very very difficult.
Whether I bike to get them, or walk, or even get in my car, it’s always far more difficult than it should be. Because if I’m getting a big load so I opt to take my car, the chances of finding a parking spot close to my house when I return is slim to none. That almost always results in grocery arm- which is the feeling of intense pain in one’s arm after trying to carry 14 grocery bags for three blocks. The pain is real and it usually lasts at least five days after.

6. Speaking of parking, losing your car is a real thing.
Sometimes I have to park my car five streets away. And then often times I’ll leave my car in that spot for weeks at a time without driving it. So it’s always a guessing game where my little car might be hiding…

7. People hate the suburbs, mostly the people living in them.
I understand that living in the city is considered more fun than the burbs, but I also completely understand why people move to the burbs. Space! Yet whenever you meet someone who lives out there, they’re the first to tell you and they always say it with a certain eye roll and chip on their shoulder. Get over the stigma people, I grew up in Nebraska.

8. It doesn’t matter what time of day, or which day it is, people are always drinking.
You’ll never find an empty bar. I’m a fan of this one, a big fan in fact. The bar atmosphere in Chicago is just wonderful.

9. Summers are… smelly.
For the most part, I think Chicago is a very clean city (besides the rats.) Yet there’s a certain funk smell to summers in the city. I can’t quite pinpoint what the smell is, but it’s there. And on a hut and humid day, it’s really there. I’ve become OCD about washing my hands all day every day since moving here. I was bored the other day and even took a quiz about how high my hygiene is just to be sure I’m not letting that funk smell attach to me. You can find that quiz below if you’re interested.

10. Brunch is EVERYTHING.
Again, another favorite of mine. Give me brunch over any other meal.

Speaking of, I’m ready for a Bloody Mary.