Just for the record guys, I actually said yes. Chris said, will you marry me?  I jokingly posted this on Facebook last week after it happened and am embarrassed to say I had more than a few texts from friends (and family) inquiring as to who asked who (or is it whom? whatever)… Not that there’s anything wrong with a gal asking a guy, it’s just not how it went down with Chris and I. However I’m oddly flattered so many of you think we have such a modern relationship.

This is how it really happened. I feel like I should I preface this post by noting that I’ve always been a bit private when it comes to this kind of thing- I know this sounds weird given that I blog about my life for all to see on a daily basis, but when it comes to the really personal stuff, I keep that to myself.

So when Chris and I would have the conversation about getting engaged I always told him one thing; it needed to happen in private. I know some girls want the big public display of affection with fireworks and crowds and photographers “hiding” at every corner, but that’s pretty much my nightmare. Like my pal Amy Poehler would say, good for you not for me. I’m such a shy weirdo about this kinda stuff, anything like that would have embarrassed the hell out of me. So my only request for Chris was that it would just be the two of us when it happened. (And Harlow of course.) No photographers. No strangers. No anybody else. Just us.

Last Thursday on December 23rd it was just that.

Chris and I were doing some last minute shopping in Fremont when he suddenly stopped by his house to grab Harlow. Some of you might think this seems a little random, but Harlow runs almost every errand with me anyway (because I have separation anxiety), so it actually wasn’t anything out of the norm. However when Chris turned away from downtown and instead headed toward his family’s land a little bit outside of town I knew something was up.

After we got to his land he parked the car and asked if I wanted to go for a walk. I should also add that it was raining and about 35 degrees, so “a walk” wasn’t exactly the normal thing to do at the moment. But I played along- kinda. I was mostly smiling and asking “what’s going on? what’s happening?” But I knew. And he knew I knew. But it doesn’t mean it wasn’t fun for us anyway. For those first ten minutes we were both giggly and shy like we were on our first date more than seven years ago at El Potrero in Lincoln, Nebraska.

As he led me through the trees the only thing I can remember saying is, “I feel like I’m on the Bachelor.” I meant it in a good way, but I recall him giving me a look like I’m going to pretend you didn’t just say that. Then all of the sudden Harlow seemed to have gotten a whiff of something and he just took off. Chris told me to follow him and when I found him he was devouring treats near a tree that had a wreath hung on it. When I looked to see what Harlow was eating I noticed that set beside the mound of treats was a ring box.

I opened the box and it was empty.

It was about at this point when I started to get really overwhelmed and things started to blur together.  But when I turned around, there was Chris on one knee… I only know this thanks to the photos. I actually said to him later “why didn’t you get on one knee?” I had no idea he actually did… I’m not sure if it’s because I was so excited or so in shock, but I can’t remember so much of what happened. (And no, I hadn’t been drinking before.)

It wasn’t until Chris had put the ring on my finger when he told me to look toward the tripod where the camera was set up. I was completely unaware that it had been there the entire time. Even though I had told Chris I didn’t want any photographs of the proposal, he knew I’d think otherwise after it was all said and done. And he was right, these are probably my favorite photos ever. Is he a good blogger-fiance or what? 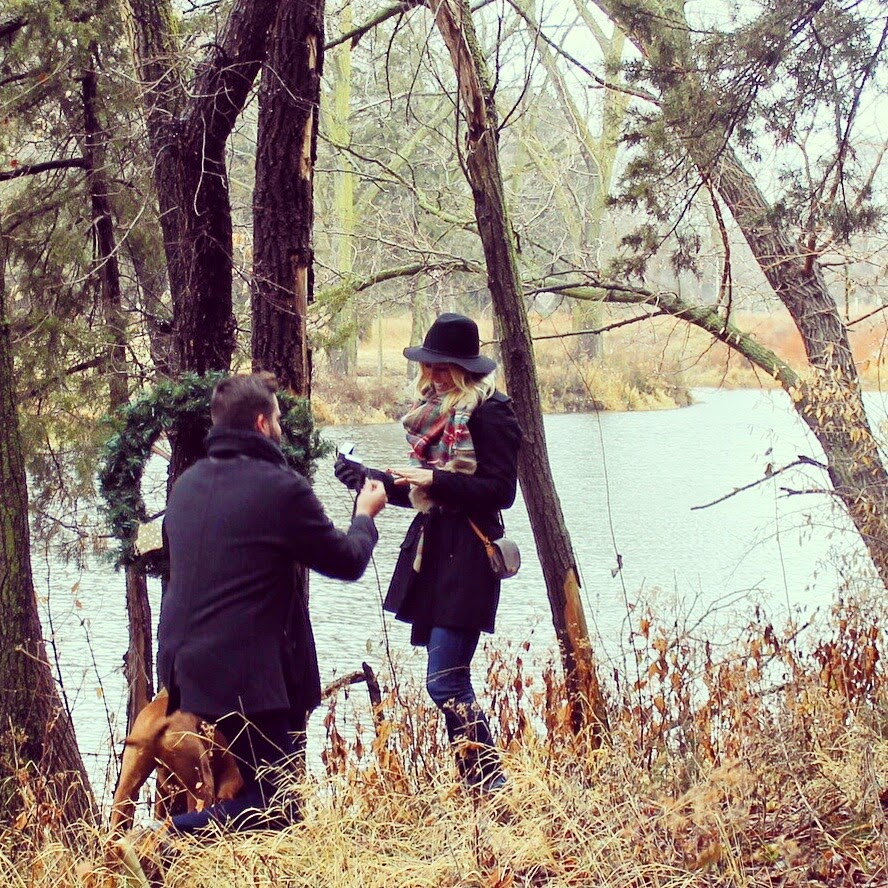 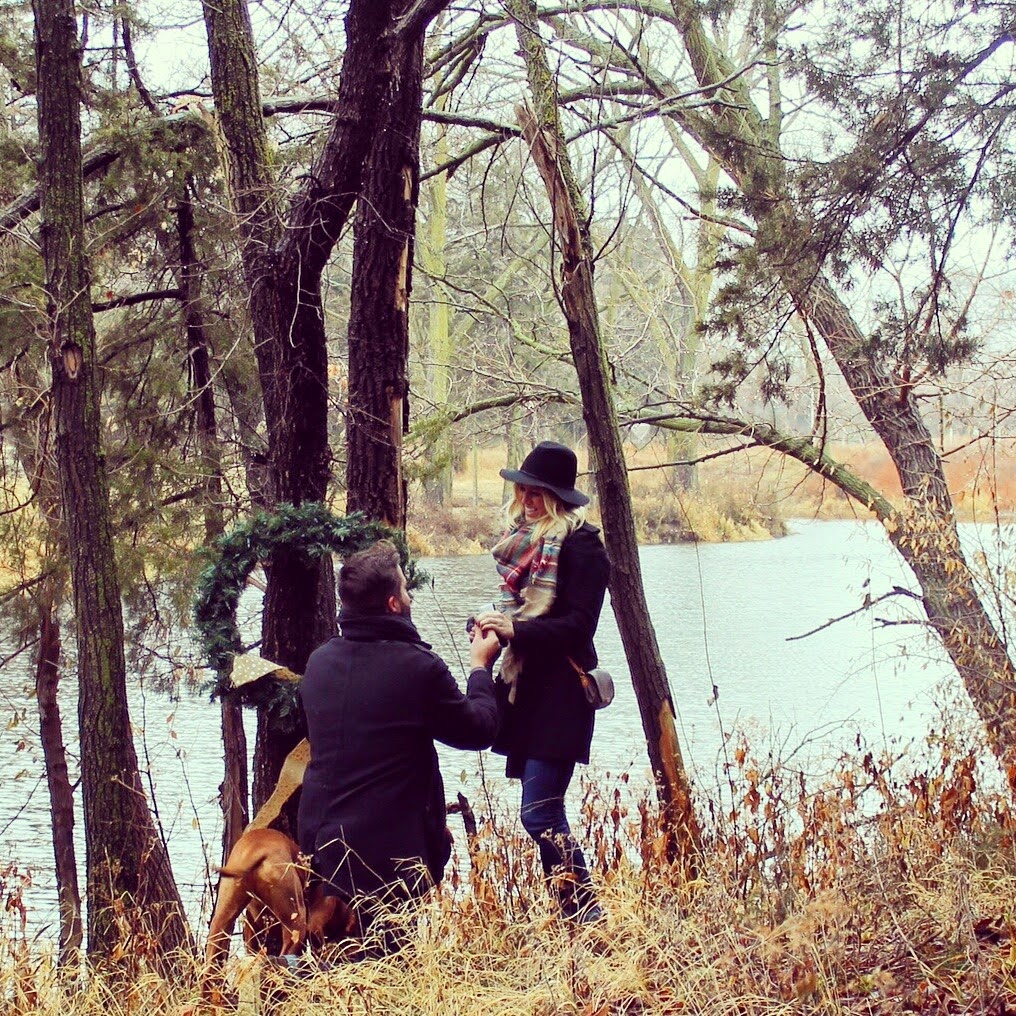 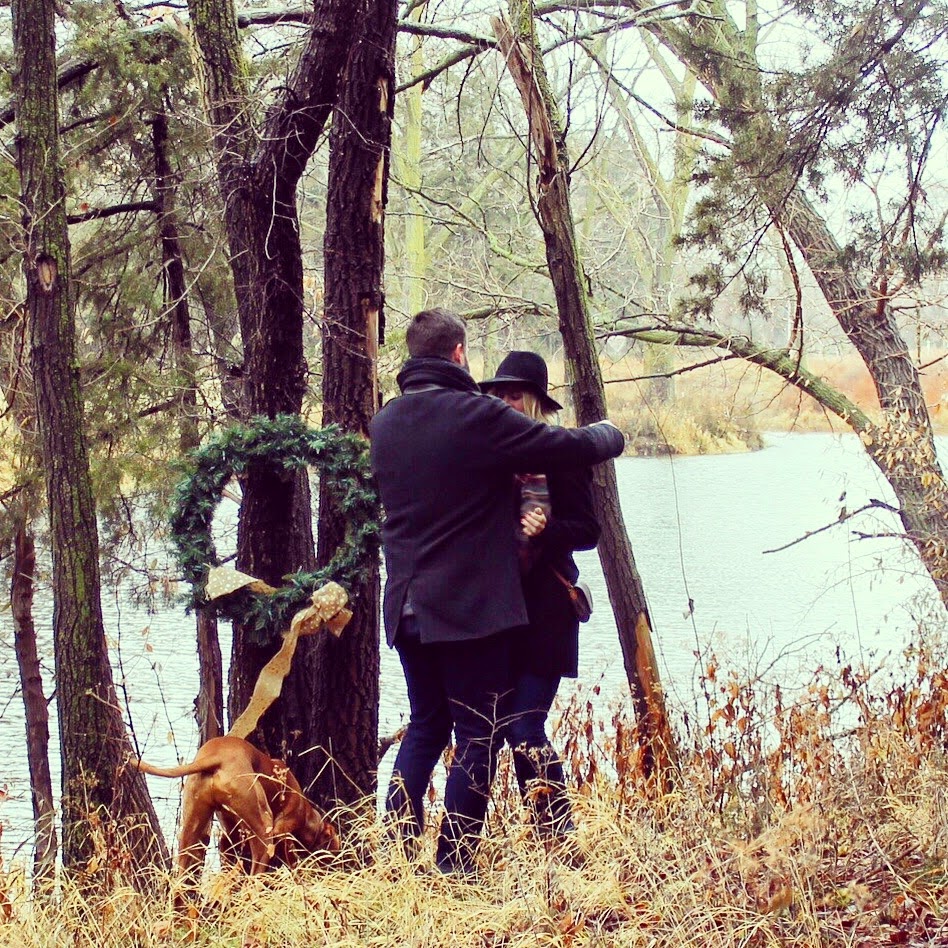 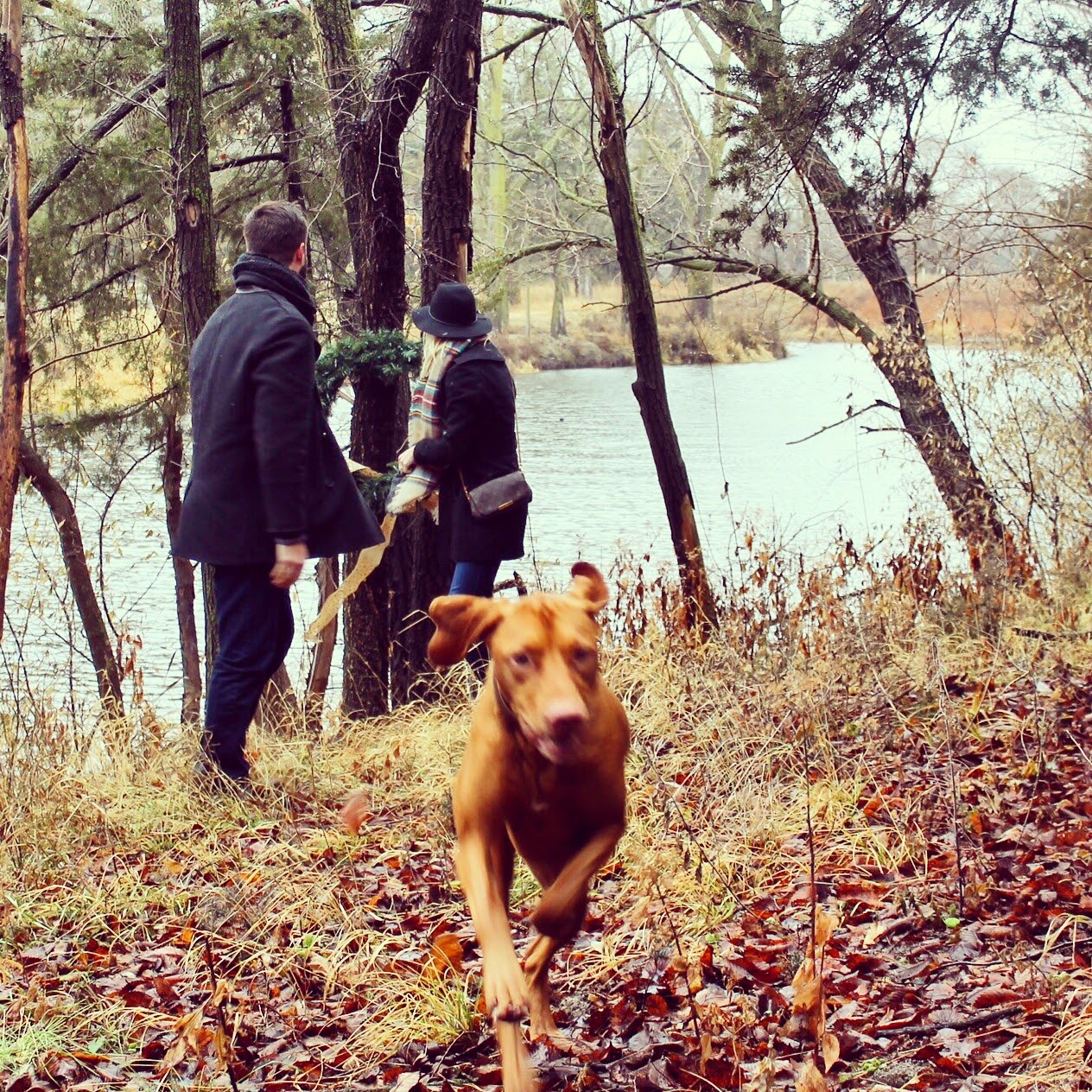 As we drove back to his house I just kept smiling and couldn’t believe it was all real. The entire thing was just so wonderfully private and low key, it was exactly how I hoped it would be. It’s as if Chris managed to capture the essence of us in his proposal. I know that sounds trite or cliche, but I don’t care. It’s true. He did good.

When we got back we celebrated with champagne and friends and family that were waiting for us at his house.

Here we are holding our first engagement gift from academy award winning filmmaker (and my good friend and idol) Alexander Payne. The bottle reads “Congrats Chris and Taylor, you guys are the best! I can’t wait to make a movie with Taylor some day, she’s so great. Much love- Alex.” 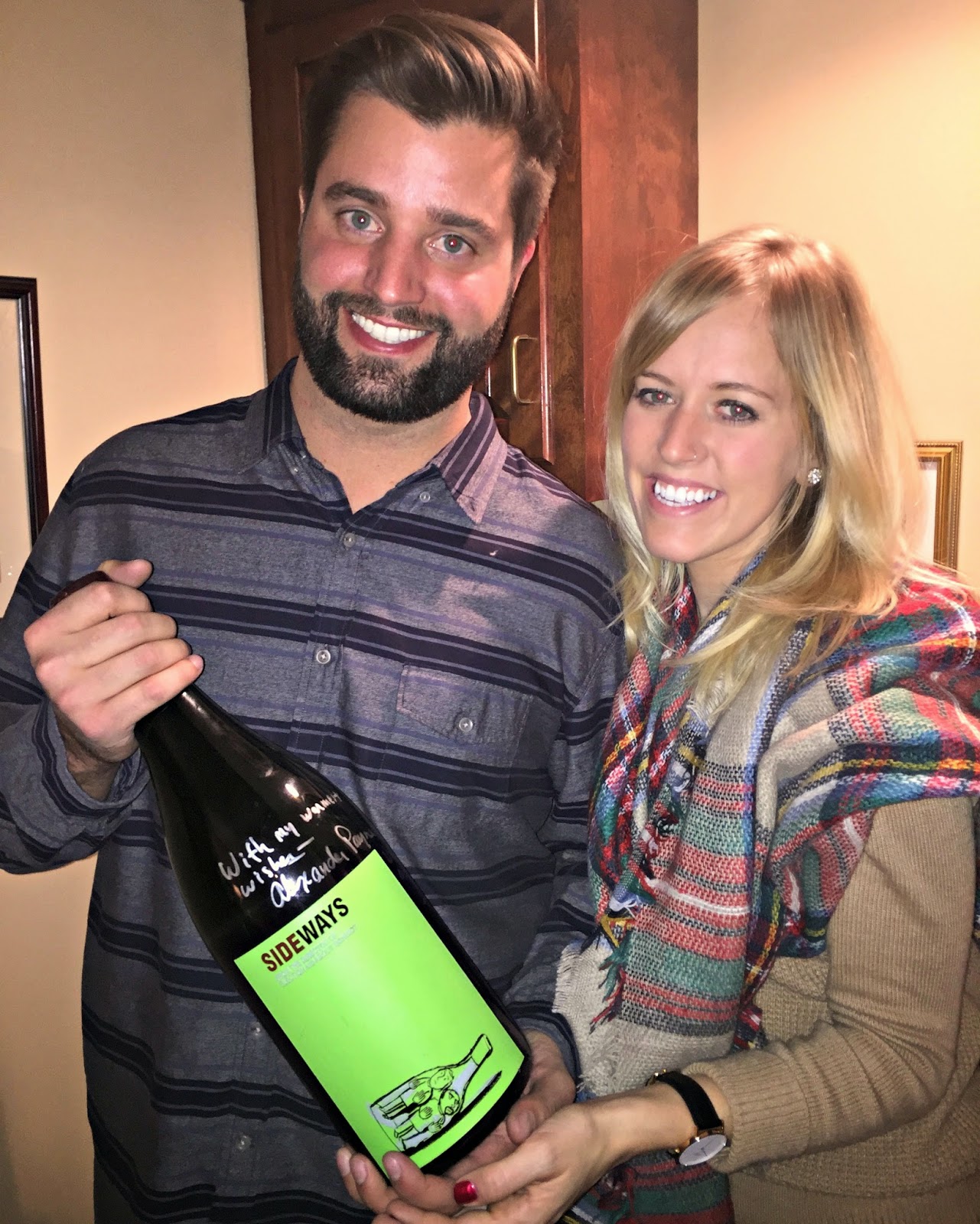 Disclaimer:The wine bottle was actually won at an auction after he filmed “Nebraska” in Norfolk. But that’s neither here nor there. I have met Alexander Payne and I’m certain we will work together in the future. 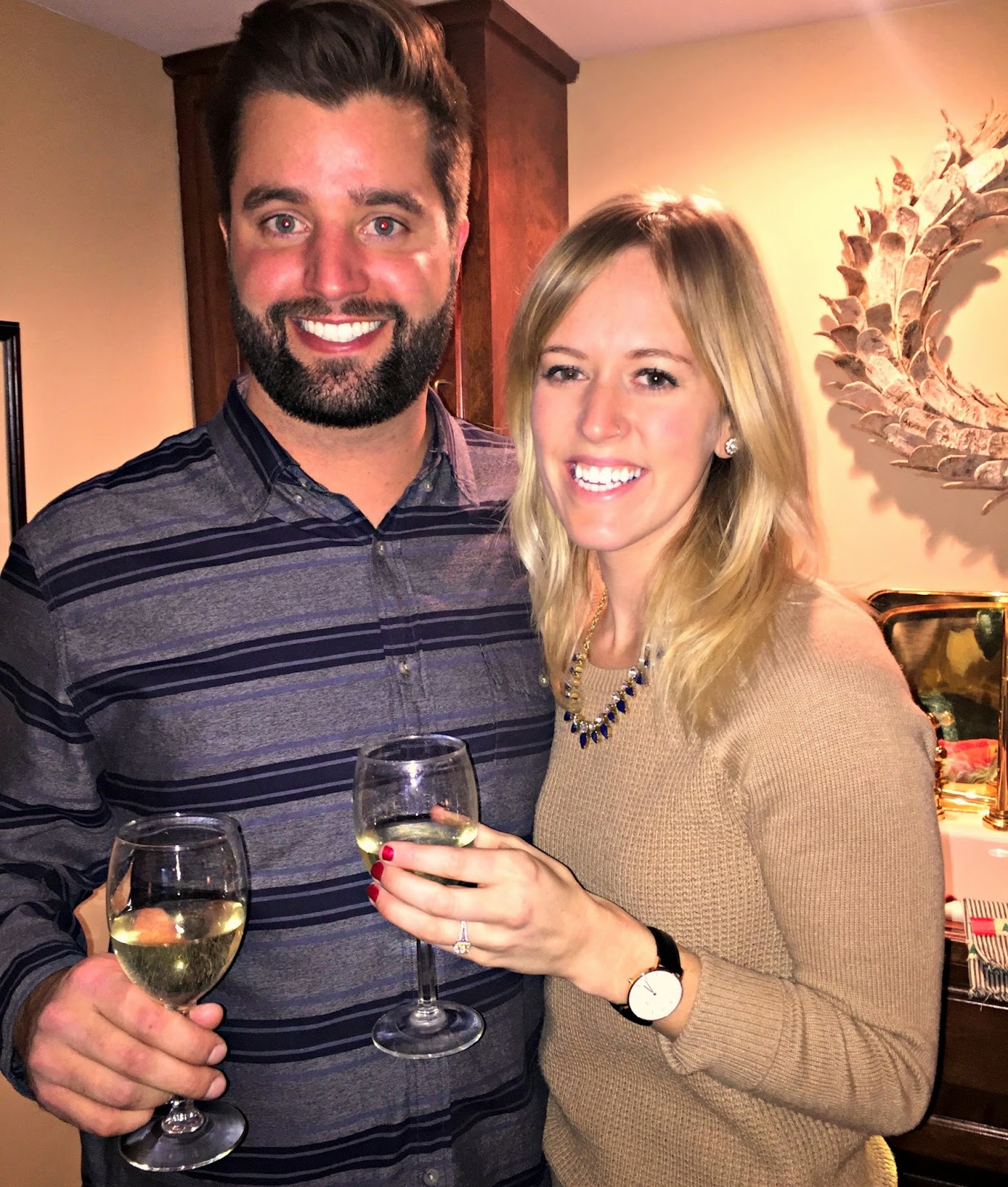 And that’s the story of the day Chris asked me to marry him. I can’t quit smiling when I think about it.

I never thought I’d be that annoying girl who can’t stop looking at her ring but I am. I so am. I might even get crazy and create a wedding board on Pinterest tonight. Look at me go… 2015 is looking good. 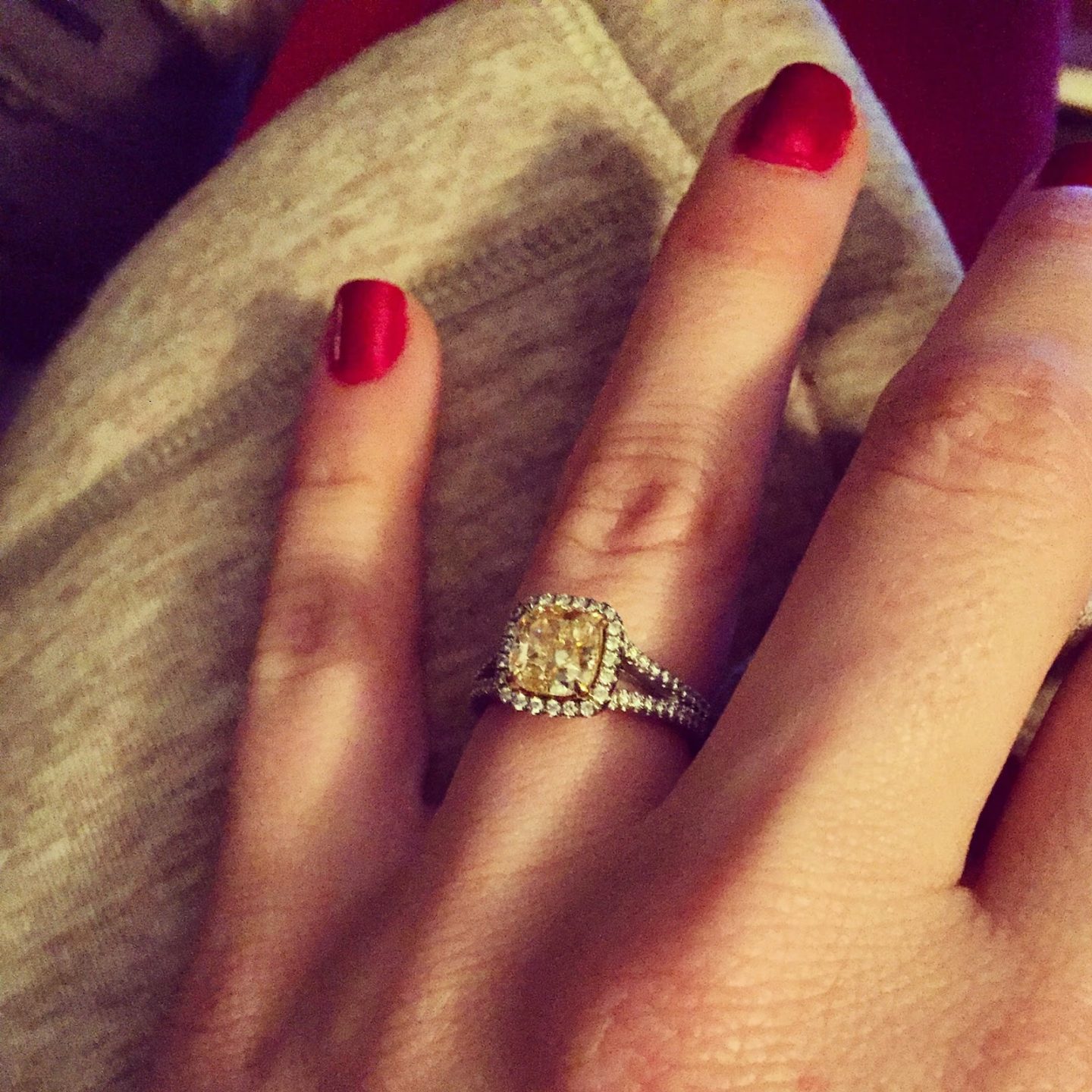 Thank you again for all of the congrats and well wishes. I was so overjoyed reading all of the nice messages I actually broke my iphone (that I’ve had for two weeks) in the process and I didn’t even care.

Happy last few days of 2014, everyone. We’re going out on a high note.