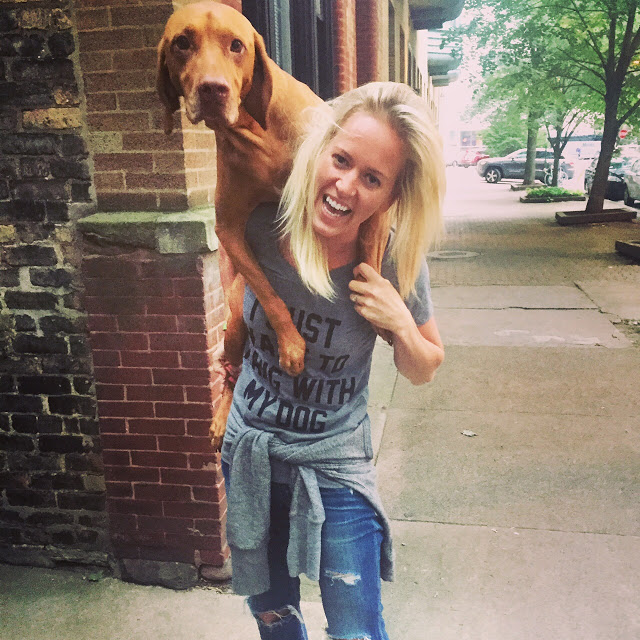 Five years ago at this time a little Hungarian Vizsla puppy was born on a farm in Gridley, Kansas. He had a pudgy body, oddly skinny legs, and a big old head. He was “the outsider” of the group the breeder told me, not quite as “regal” as his brothers and sisters.

I wanted him immediately. Look at him. How could you not? 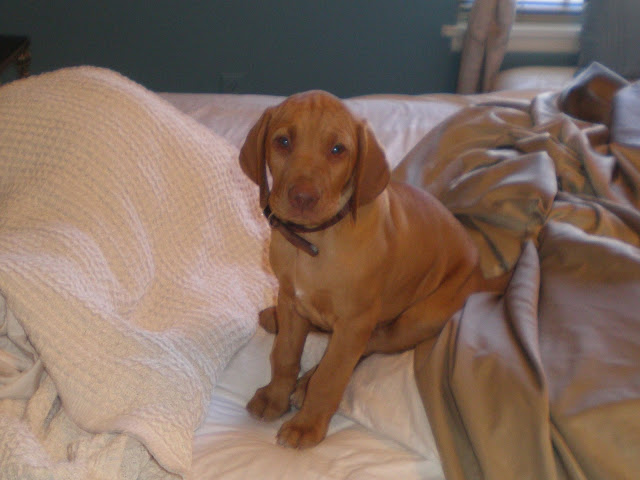 Truthfully, I knew nothing about the breed. Chris mentioned once or twice he thought Vizslas were cool so one day while he was at work (and I was lonely) I googled Vizslas and found a breeder close by. Of course I would learn the ways of Vizslas quite quickly and basically found a new job so I could work from home to ensure Harlow gets the 5-10 runs he demands per day (3 of which must be off leash.)

Once I found the photo of baby Vizslas for sale close to where we were living there was no going back.

In hindsight, I know Harlow came from a good family/breeder because he was reluctant to let me take him. I don’t blame him. I was fresh out of college, living in an apartment, and this was my first dog on my own.

But I managed to convince him I’d give this puppy a good life so he let me take the little chubby awkward one of the bunch home with me. But before leaving the breeder told me that when training a Vizsla, “You can’t punish them. They’re sensitive dogs and you’ll break their spirit.”

And I never forgot that he said that, however the breeder failed to mention one very important thing: how you do train a Vizsla.

After living with Harlow for a few years I realized why he never said anything, it’s because you don’t train them. Vizslas train you.

Let’s look at a few Harlow’isms, shall we? Are these Vizsla traits I wonder, or just Harlow traits?

The Leaner
He can’t just stand next to you, he must actually lean against you. All. The. Time.

The Paw Slap.
Harlow doesn’t bite, but he sure gives a good slap. I’ve had one too many scratches on my face when I’m not paying him enough attention and he suddenly whacks me across the face.

The Bathroom Rug.
Aka Harlow’s spot when I shower… God forbid he be more than two feet away at any time.

The Hello.
Whether I’ve been gone for 30 seconds, or three hours, the moment I walk in the door Harlow has to find his favorite toy to put in his mouth to greet me. If he can’t find something immediately, he starts to panic and will grab a pillow or blanket to present to me.

Open Door Policy.
Harlow hates closed doors. He’s known to go around the house nudging every door open with his nose… Which is fine, until guests come over and use the bathroom. Let’s just say he catches some people off guard.

The Moans and the Groans.
Harlow is a vocal dog. He’s got something to say about everything.

He Plays Hard To Get.
After he gives me the “it’s time for a walk” glare/shout for a minutes I’ll get his leash out, but then when I try to put it on him he playfully puts his butt in the air, and then runs from me so I have to chase him down. It drives me insane.

The climber.
He’ll climb anything; a tree, the couch, a ladder, me (photo above.) In another life he was a circus cat.


The Thief.
Anything left on a counter or table is fair game. There is no such thing as “out of reach” for Harlow.

The Big Vizsla.
Harlow is known as the “Big Vizsla” in Chicago. So far he’s the biggest V we’ve seen in the city. Perhaps it has to do with his stealing habit as mentioned above? He once took down an entire bag of hamburger buns + 12 muffins in an hour…

Snuggles McGee.
Harlow doesn’t just sit on you/lay with you. He snuggles. He has to cozy in as close to you as possible. And no matter the time of year (like even in the dead of summer) he wants to be nestled under a blanket.

Like I always say,  where there’s a lap there’s a Vizsla.

Happy Birthday, Harlow. You’ve turned me into the over-the-top crazy dog person I always knew I could be. 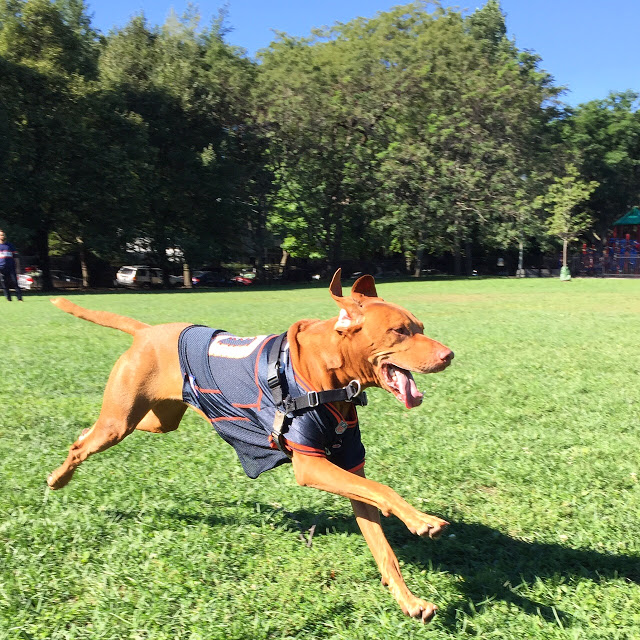