I feel like a grandma saying this, but I don’t get Miley Cyrus. She makes me want to take a nap.

Like what’s happening there? Is this what the kids are into? Are they all eating glitter and stuff now? If so, that’s fine. I just want someone to explain it to me. I used to eat glitter Play Doh, so I guess I kind of get it. 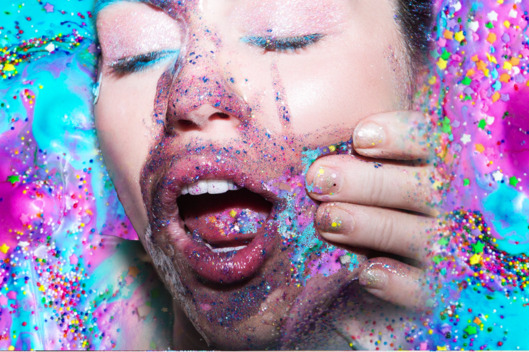 And what’s going on with her latest album release? I don’t like to knock artists but… I don’t like it. So maybe that means it’s good? I’m one of those lambs who has to hear a song like 100 times (unless it’s folk, I LOVE all folk) before I think it’s good.

You wanna talk about good music? Now her Breakout CD was great. I’ve bought probably eight CDs in my life and that was one of them. I cruised around so hard in college singing,

“I can almost see it.
That dream I’m dreaming, but
There’s a voice inside my head saying
You’ll never reach it.”

Here’s the thing, her weird outfits don’t bother me. I went through a weird outfit phase too. I once had a belt adorned with bottle caps that buckled like a seat belt! I wore leopard capri pants on the first day of 8th grade WITH crimped hair. And I used to wear blue penguin pajama pants to school. So Miley, I get it. And if she makes just one outsider feel okay about not being like the rest of the them, well then that’s great.

And as for the fact she likes to be naked all of the time? Good for her. Whether she’s doing it all for show or not, let’s embrace it. Women have been forced to be covered up for centuries, so what if we’ve got a wild child on our hands who wants to “free the nipple” and empower the women movement. It’s just a nipple, we’ve all got them.

Now does freeing the nipple empower me? Absolutely not. It gives me anxiety and nightmares. But we’re all different.

But here’s the kicker. Here’s the one thing I really don’t understand about Miley and wish someone could explain to me, why is she always talking about smoking pot? Why why why.

You smoke, Miley. We get it. No one cares. Anyone else feel like she’s a little late to this party but doesn’t realize it? Ya Miley, I remember my first beer too…


I mean it’s basically legal everywhere now. I’ve seen Chicago police walk by people smoking joints on the street and not do a thing. Because it’s pot. Your grandparents probably still smoke it on occasion. Move along.

But then I have to remember she’s what like 19? Or 25? I have no idea. I just know that she grew up in a Disney world so she probably missed out on the whole high school/ college thing when everyone thought they were the first to discover pot and it was so cool and wanted to shout to the world about it while wearing their Bob Marley shirts and hemp necklaces.

I have no way to end this. I just watched her host SNL this past weekend and I really hoped it wasn’t someone on their writing team who wrote the “joke” in her opening monologue about “someone who smokes as much as me is always on a seven second delay...” I literally groaned out loud.

What do you think, blog world? Am I just too old for Miley these days? Or is it all just a very calculated show and underneath all of the costume and glitter she’s really just Demi Lovato?