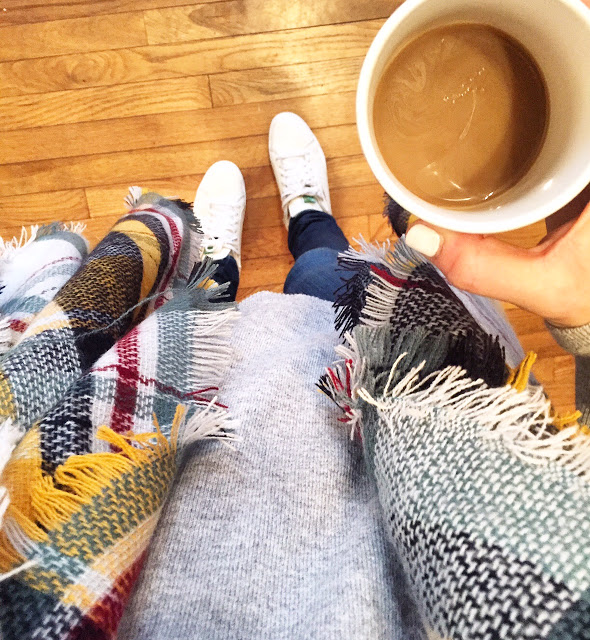 The fun thing about this week of purgatory between Christmas and New Years Eve is that I feel like I have a little more free reign to ramble on this blog. As opposed to those other days when I have so much direction…

So here’s what’s on my mind today.

*Isn’t it funny we live in a world where a stupid photo like the one you see above is a thing? I just can’t get into it. Yes, I occasionally post them on Insta. But 9 times out of 10 I’ll delete them after ten minutes because I can’t handle the shame I place on myself for doing so. I like YOUR view from above photos, not mine.

*The winter has arrived in Chicago. I snapped Harlow’s first day rolling in snow like a maniac a few hours ago. You can find him @thedailytay.

*I binge watched Making A Murder yesterday. I’m too angry to even put into words my feelings about that doc. Please tell me if you’ve seen it so we can bitch together! The corruption and cover up is INSANE! They didn’t just ruin Steven’s life, but they had to take down his entire family as well. I won’t say anymore because I don’t want to spoil it. But do yourself a favor and watch it because I’m going to write a full post on it next week.

Last thing I’ll say about it, Kratz is filthy human being. His rat voice makes my skin crawl. And no, I’m not being too harsh.

Everyone got a puppy for Christmas and I have intense puppy fever. But… I’m not sure I’ll ever get a puppy again. Anyone else struggle with this? For ME (this has nothing to do with you and your choices) for me personally, given what I know now, I just think I would feel too guilty not adopting a rescue pup. It just doesn’t sit right with me.

Harlow was not a rescue. And it’s hard to say I regret that choice because it’s Harlow. I can’t regret him. But … so there’s so many sweet rescues. My brother and his wife (first time I’ve said he has a wife, weird!!!) have two awesome rescues. One is a gigantic scary looking pit bull named Sammie who has a severe burn all the way down his back from his previous owners doing God knows what to him. And yet Sammie is more docile and well behaved than Harlow will ever be.

So I don’t even know why I’m rambling about this because we can’t get another dog for a few years anyway. But that’s not to say I don’t think about it every day anyway.

Lastly, cat lovers get excited! Next week I’ll be revealing my first cat shirt and I’m a huge fan of it and hope you will be too. Just like with the dog shirts 20% of profits go back to helping animals in shelters.

In 2016 my goal is to give $10,000 to shelters. It’s lofty, I know (I’ve always been a dreamer, you should know that by now.) But I really think it can be done. I’ve got some other ideas on how to reach this amount. Reader poll: if I make another (different) dog shirt, would you be likely to buy it even if you’ve already purchased the original?

And today’s post has been brought to you by all of the coffee!

There’s only three more days left of 2015. Make them count!