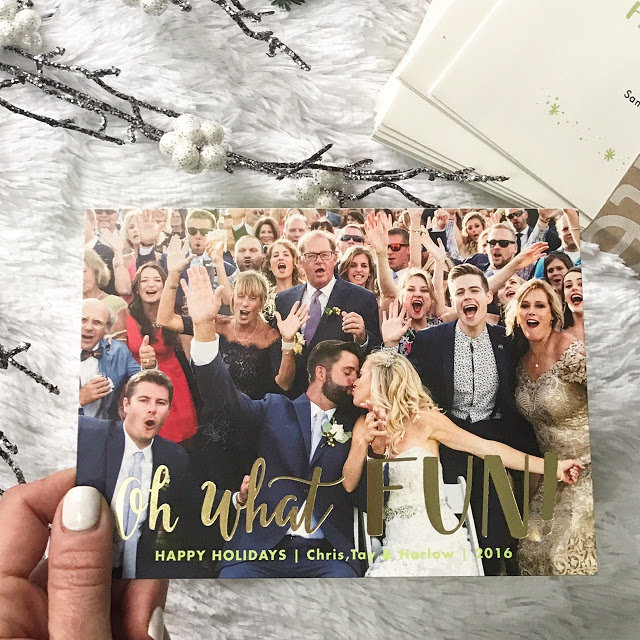 The theme of this year’s card was OH WHAT FUN!

Have I mentioned before how much I loved our wedding day? I think this photo totally captures the essence of it all. I also love the idea that we were able to include so many of our favorite people in our card this year. When I think about the fun that was our wedding, I think about these people.

And now to follow up my holiday card with my annual Wolfe-Hillis Christmas letter. A letter written by a random “narrator” as Christmas letters usually are, full of nothing but humble brags in hopes my family comes across better than the family we’re taped up next to on the fridge.

To our dearest friends and family,

What a year it has been! From weddings, to honeymoons, and officially becoming homeowners in Chicago. 2016 is definitely a year for the books.

A few highlights include:

Harlow was recognized at the Cubs parade. (twice.)
Chris wore his lime green Chubbie swim trunks every day of the honeymoon.
Taylor learned how to take a mirror selfie.

Everyone has had so many blessings and many things to be thankful for, let’s start with the head of the household; Harlow.

Harlow is maturing into a very fine young man. He’s gotten a few more silver hairs around his chin which make him look quite distinguished. He was a bit hesitant about them when they first came in and Taylor caught him ordering hair dye off amazon, but she quickly nip that in the bud and simply deleted his Tinder profile.

He excelled in bone chewing, stick chewing, toy chewing, and his most favorite past time of all, eating garbage at the park. Harlow is loving the new neighborhood! He spends his days staring out the window at the other dogs across the street, also staring out their windows.

He’s made some new friends, but mostly new enemies. For the first time in his life he’s encountered “big devil squirrels,” or better known as “cats” to you and I. The new neighborhood is full of them and Harlow is terrified. And also very angry.

On the professional side, Harlow’s blogging career is still going well as he receives 5-6 packages a week and is currently working on his first memoir, “Through These Brown Eyes.” It should be out in early 2018.

Chris has settled into his manager role at work just wonderfully. He constantly talks about his love for “his reps” and is always reading books about how to improve himself as a leader and role model. He watches Dangerous Minds on repeat and memorizes Michelle Pfeiffer’s most inspiring monologues.

Although if we’re being honest I think the highlight of 2016 for Chris was probably the best weekend of his life, also known as his bachelor party in Las Vegas. And by weekend I mean the five day trip he and 86 other boys from Fremont attended. No photos were taken over the weekend, but if I know those Fremonster boys, I’m sure it was all innocent fun.

And finally we have Taylor.

2016 started off strong for Taylor with an audition at a real life talent agency. This is my year, she thought to herself as she sat in the waiting room surrounded by head shots of actors she didn’t recognize. The audition went great and the agent said she’d get back to Taylor! It has been ten months now, but Taylor is still confident that email is coming.

She had many comedy accomplishments including… And was cast on the improv team… And was asked to do standup at…. And finished several webseries about…

Her t-shirts are doing quite well! She is truly living the dream of a T-Shirt Lady! Every morning she gets up and thinks, could I put that on a t-shirt? She’s made great strides in her anger management and no longer harasses every other store using ideas that she has created.

The book(s) she’s been working on for over ten years now have once again been put on the back burner in order to concentrate on more important things such as, leg photos and coffee cup photos on Instagram. She’s just certain attaining 50,000 followers will fill that void inside her for all of the unfinished creative work she’s too fearful to tackle.

And her instavids and snaps bring her so much temporary joy she can tell she’s on the right path and just about ready to break through. Just one more self help book and she’ll be there!

So many blessings, dear friends.

I hope your year was just as beautiful as ours, same with your holiday card. (But ours was foil stamped, so like good luck.) 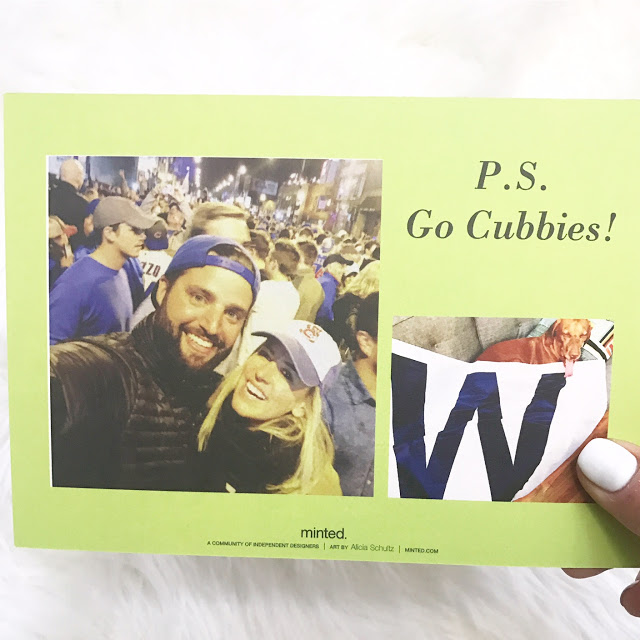 Our cards are from Minted and their quality and customer service is nothing short of exceptional. They are my go-to site for cards, photos, wall art, ext. And PS today they have 20% off!