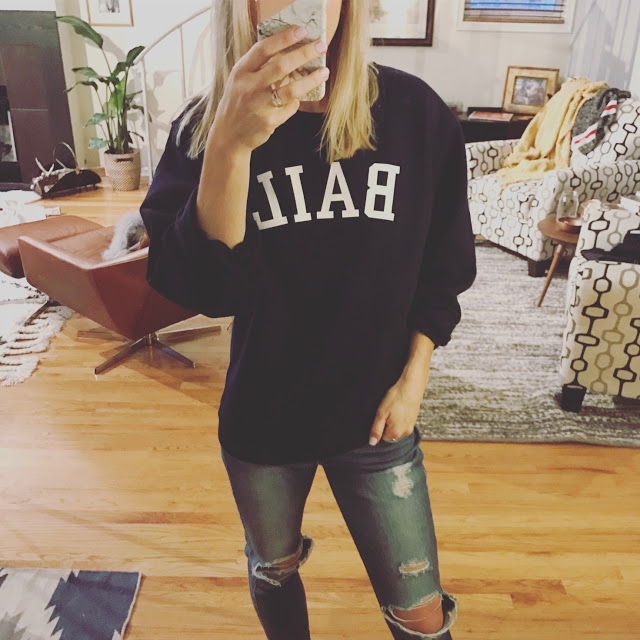 Let me start by saying that I don’t dislike our neighbors. Truthfully, I don’t know them that well, but from what I can tell they are kind people.

However, if I’m headed out the door and I happen to hear them in hallway I freeze. I will actually wait by my door and listen until I don’t hear them anymore. Once it’s safe to leave I make my exit.

Last week I was in a hurry and not on my guard when I walked out my backdoor only to see our neighbors walking up the stairs right toward me. For a second I actually thought about darting back into our house, but they had clearly seen me. They had also seen me do a weird stutter step when I thought for a moment about walking backward, like a dog caught between a couch and coffee table, back into the safety of our home.

Instead, I decided to do what any normal human would do- I began to look at my doorframe like I was measuring it. With my hands. As if I had never seen a doorframe before, and most likely in my neighbors opinion, never seen other humans, either.

Until they said, “hello.”

And I responded, “errrr ughhhh huuuuu heyyyyy.” Let’s not forget speaking to other humans when you’ve been locked in a hole for 18 years isn’t as easy as a task as you’d think.

Did I mention this was the first time I met these specific neighbors? Made a great first impression, I’m sure.

As I told Chris this story later that night he simply responded, “Tay, that’s not normal.”

Okay. Fine. Perhaps some of you might be thinking the same.

What next? I suppose you’re going to tell me it’s also “not normal” to panic when you’re about to say someone’s first name in case you get it wrong even though you’re 99% sure you’re right because you’ve known them about about 2 years now, but there’s still that one chance…

Or that you daydream about the time you spent as a kid hiding under tables that were covered with long tablecloths that draped over the side so they became your own private hidden fort of solitude and comfort?

Remember the parachute game? What a treat that was. The only problem was that all of my other classmates had to be there. Me and parachute could have gotten on quite well just the two of us.

To this day, when I walk into a busy classroom and see an open desk in the corner it’s like the heavens just opened up. A corner seat might as well be a spot under a table!

Same goes when I find a person at a party who I actually know and enjoy and they suddenly become my lifeline. DO NOT WALK AWAY if you are said person. Or do, because the longer you stay the harder it will be for me to let you go.

Lastly, when I have plans with a friend (a friend I actually want to see) but they have to cancel, I rarely (if ever) get mad about it. Because deep down I’m kind of happy. Cancelled plans = pure joy.

So what do you think? “Not normal?” Okay. Fine.

Is this considered “minor” social anxiety or simply traits of being an introvert? I’m not sure.

I know that I’m not by any means scared to see people outside of my house, I’m simply scared of the small talk that usually ensues because of it. Scared isn’t the right word, perhaps I should say dread. I dread the small talk. And so, I bail.

I’ve created a sweatshirt that sums up my hermit-ness because that’s what I do.

BAIL- as in the University of canceling plans. (The tag for my sweatshirt above.) I’m really proud of this one because it speaks to my heart and describes how I usually feel.

The lighting is off, but it’s navy blue and oversized and oh so comfy. Found here.

So now I ask, what’s it like to be on the other side? To be the person who is good at socializing and looks forward to seeing neighbors in the hallway. To be the “the Chris,” if you will. I feel like it must be nice. Exhausting, but nice.