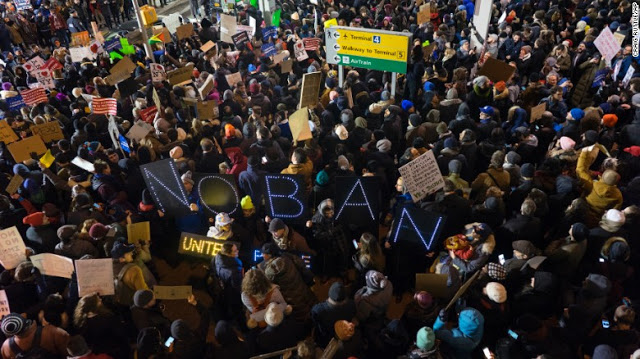 We purchased our Visas for Cuba yesterday and ordered guidebooks from Amazon last night. We leave a week from Thursday and my intention was to write about how excited we are for this trip.

But talking about our plans to jet around and frivolously see new places feels extremely privileged and weird right now.

I keep wondering what entitles me to do this while others have been locked up in airports? Some just 12 miles away from me. What have they done that I haven’t? And the only thing that I can come up with is that I was born into the “right country” and they weren’t.

I told myself 100 times to keep things light around here this week. I’ve stared at my computer screen for 24 hours now trying to write about Harlow, or Valentines Day crap, spring fashion, ANYTHING but another political post. But it’s heavy on my mind and heart so here we are, writing about anything else feels so fake and fluffy to me at this moment I just can’t do it. It’s weighing on me and once again I have some questions…

In the last couple of posts I’ve written this month several of you have proved to answer my questions, and most very politely I’d like to add, which I really appreciate. I read each and every comment and think about it and research it and genuinely enjoy when those of you take the time to explain a view I don’t understand, or necessarily agree with all of the time. Caring about politics like I do now is new to me, so I’m well aware that I have a lot to learn.

I’m also aware that because I live in Chicago so much of what I read and see is favored heavily to the left. Luckily for me, Chris leans to the right. So our nightly discussions are somewhere in the middle and we’re both level headed people and are able to talk about this stuff and try to make sense of what the hell is going on in our world right now.

Again, if you could hear the sighs that happen as I settle into these posts you would understand that I don’t walk into them lightly, or without heavy consideration. I wish I could go back to the days where I didn’t care and could easily talk about any other topic and not think twice, but unfortunately that’s not where I am anymore.

So here we go… let’s pretend we’re friends having coffee at a cool hipster joint where it just wouldn’t be cool to raise our voices at each other, and also because we’re friends.

That being said, I find it absolutely heartbreaking to see what our country is doing right now. I can hardly read the stories or watch the videos of people being torn away from their loved ones, or not being allowed back into a country they’ve called home for so many years.

Or to read about the families not being allowed in when they’ve waited so many years for their chance to finally start their lives outside of a refugee camp. We can’t even begin to comprehend what that letdown must feel like.

To the Republicans reading, Trump is simply doing exactly what he said he would so I get that for several of you this is what you wanted, and what you support. I don’t agree, but I can see your perspective.

Anytime I see someone oppose this ban the immediate response from the right (on my Facebook anyway) is, “Don’t you want to protect our Country?”

I most definitely do. But I don’t understand how this is helping? So when I don’t understand something I often look to the Republicans I admire in hopes they’ll have a better answer for me. Which usually happens to be McCain (because yes, I like and voted for McCain) and he said this,

“We fear this executive order will become a self-inflicted wound in the fight against terrorism,” McCain and Graham said in a joint statement, adding that Trump’s executive order “may do more to help terrorist recruitment than improve our security.”

Have there been refugee terrorist attacks in our country that I have missed? I’m seriously asking, any news source I turn to says no, but if you have different facts please tell me.

As Chris often points out to me the terrorist attacks that are happening more frequently in European countries are often traced back to refugees. But from what I understand, those refugees aren’t entering the European countries under the same vetting system the United States has; a system that can take up to two years before finally allowing someone in.

The other people I turn to are those who are serving, or who have served for our country. I have the utmost respect for the military and tend to regard their opinions on a different level than others. Once again, the views I’ve been reading are split. And so I’m back to square one.

And yes, I’m aware that Trump ties this ban back to Obama. But from what I’ve gathered, Obama’s ban was for one specific country (Iran) and had more to do with the vetting procedure as a whole. Further, it was in response to a specific terror threat and the review was sent through several committees, including Homeland Security and the Justice Department, before it actually took effect. (Whereas Trump’s obviously wasn’t.) If you know otherwise, please tell me. (For real, I don’t like to spout facts that aren’t true.) The info above was found at foreignpolicy.com

In all honestly though, when I see my Republican friends post things in favor of the ban I can scroll on by and understand we both get to have an opinion on this.

Unless it’s those friends of mine who like to remind me every Sunday they’re at church by posting their bible quotes and praising how much they love Jesus and want to help others and do right by God.

And then on Monday they’re posting the “keep them out of our Country” updates.

Those are the ones I struggle to understand. I’m a Christian, but I rarely go to church so maybe things have changed, but from what I recall turning your back on those who need help and comfort and safety wasn’t exactly Jesus’s way. In fact, it seems to be the exact opposite. Perhaps we should all throw it back to middle school and start wearing our WWJD bracelets again? Would that be a better reminder?

And I know I could be wrong here since I honestly stray further from religion all the time. NOT GOD, mom. I just said religion.

(But then again… as soon as I say that I’m reminded how much I love our current Pope and the work he is doing.)

And I also know there are several Christians and churches who have opened their doors to immigrants and refugees. My friend Laura shared this blog post (from another friend) that I thought was worth a read.

“Refugees are not a Republican issue, and not a Democratic issue, but a human issue.”


She mentions that Jesus himself was a refugee. Is that really true? I’m not sure as there are mixed reports, so believe what you want (as we all do anyway.)

I know I sound pretty pissy right now in regards to my thoughts on Christians on this matter and I’ve tried to word it otherwise, but I think I have to be honest with myself and admit there isn’t another way because I am pissy. So much of what I’m witnessing right now seems to go against everything I was taught about Jesus and how he welcomed “all His children.”  So it makes no sense to me.

And now I’m two hours past the time I’ve allowed myself to write this and so I will wrap it up. If you’ve stayed this long, God bless. Can you tell I’m confused and have a lot on my mind?

As usual, I’m very aware that I am an idealist and I don’t always have the most realistic views on how I think “things should be.”

I will never understand why people abuse dogs. Or children. Or each other.

I will also never understand what life is like as a refugee. What it must feel like to leave behind your home and possessions and basically everything you’ve ever known. To see your loved ones killed and tortured. To think your best option for survival is to cram onto a tiny rubber boat with hoards of other people, and set out into the ocean with your babies under your arms.

To have your one saving grace be the opportunity to get allowed into a country where you know so many people don’t want you there. Where everyone is a stranger who speaks a different language, and most of the time you know absolutely nothing about the city you’re being relocated to.

And yet you’ll go anyway, because it’s still far better than where you are now.

I don’t know how to make sense of what is going on, if you do, I would appreciate your feedback.

*As usual, please be respectful with your comments as I know there are a lot of emotions going on here.