I hate Vegas– is what I used to say. 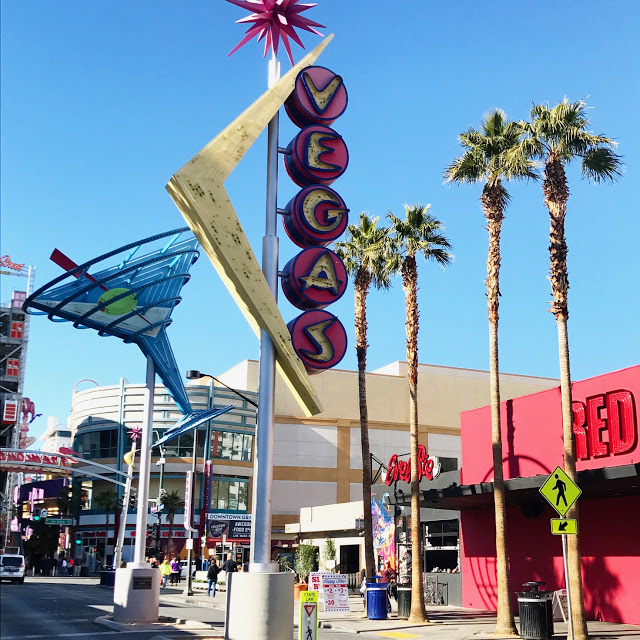 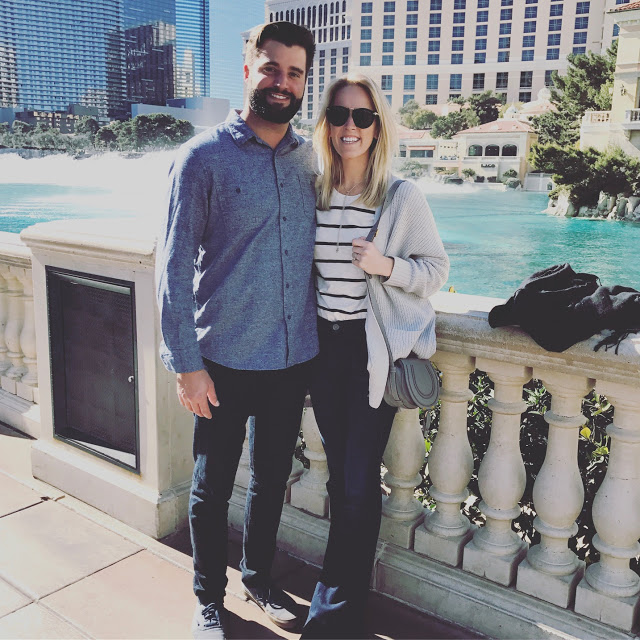 But then I realized A. that’s very insulting to the people who live there. And God knows I get pissed when I hear people talk shit about Chicago.

And B. that’s just silly. How can you hate an entire city unless you’re just a fun-hater in general?

What I should have said is that I don’t really enjoy clubs (because loud music UGH) or the Strip. However I expanded my horizons this past weekend and learned Vegas is so much more than both of those things. Although for the record I still hate clubs. And I think the Strip gets more like Time’s Square every day which I also happen to strongly dislike so…. So everyone is different.

Our flight left Chicago at 8 p.m. and our intent was to “have a bunch of drinks on the flight and get the party started!“

What actually happened was that we each had one drink and immediately slept the rest of the way. It was a long work week.

We got to our hotel around 11 p.m, quickly changed, at which point I realized I brought all of the wrong clothes (as usual) but said the hell with it and threw on a random outfit anyway because it’s Vegas and what does it matter? It doesn’t. Literally anything goes.

Chris had the Vegas look in his eye the minute we stepped into the casino and it suddenly made sense to me why he loves Vegas so much. The lights, the energy, the party mode- where I tend to turn away from all of these things, he runs right into them.

We hadn’t eaten yet, so I made him sit down with me at a restaurant in the casino for a few apps and drinks before he completely fell down the Vegas hole. Luckily, my plan of ordering too much food worked and by the time we finished dinner at midnight he was full and ready for bed. But now I was amped and insisted we walk around a bit, maybe play a few hands of Black Jack, and perhaps some slots because I had a crisp $5 bill in my purse just begging to have some fun.

Honestly, I don’t love gambling because I’m cheap and also because I hate having zero control of my money. Where is the fun in that? A deck of cards is going to decide whether or not I get to keep my $5? No, thank you.

*Also, Chris has told me I’m kind of an asshole Jack Black player because I like to hit on things you shouldn’t, like for example 17 or 18. It’s my money so why shouldn’t it be my choice? “Because Black Jack is a team sport,” he says. No, no it’s not.

You get the idea, we probably gambled a total of one hour the entire weekend. But, we did manage to make it out until 2:30 a.m. (4:30 Chicago time) which is absolutely unheard of for me. After the clubs let out it was like watching zombies troll around looking for food and bathrooms and it made me silently curse my college years.

We got up around 7:30 and drove straight to the Hoover Dam. It was a sight to see! But only for a few minutes.

We then drove into Arizona to see the West Grand Canyon. We envisioned driving right up to it and exploring at our leisure. Turns out, it does not actually work this way. I should mention that Chris and I never make plans or do any sort of research before vacations, but instead like to pull up to the spot we’re seeking, argue for 10 minutes about “WHY DIDN’T YOU LOOK THIS UP?” We then quickly look stuff up on our phone, and take it from there.

Vacation arguing is even more fun when you’re married!

We paid to take the tour bus to the lookout spots and even did the skywalk with the glass bottom and it all turned out okay! 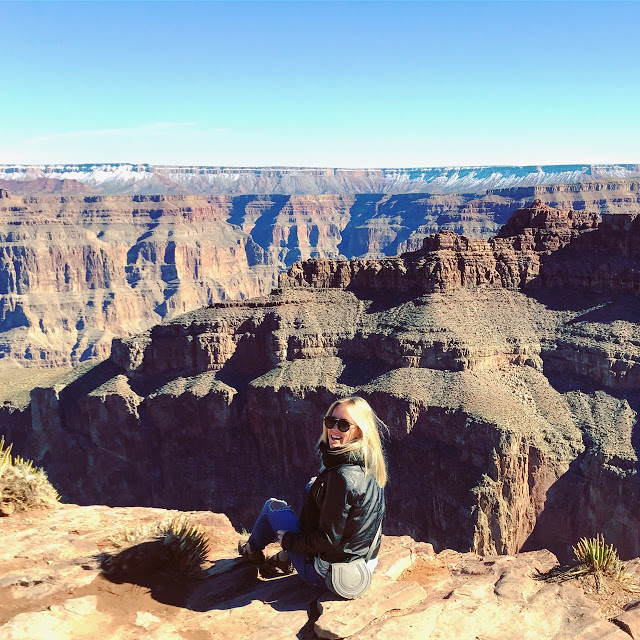 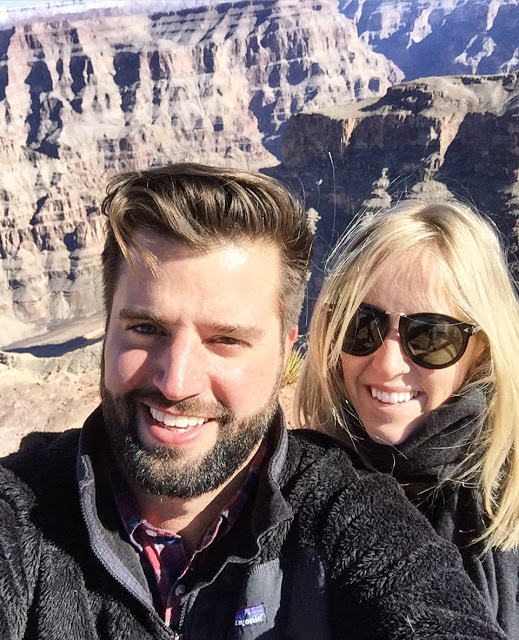 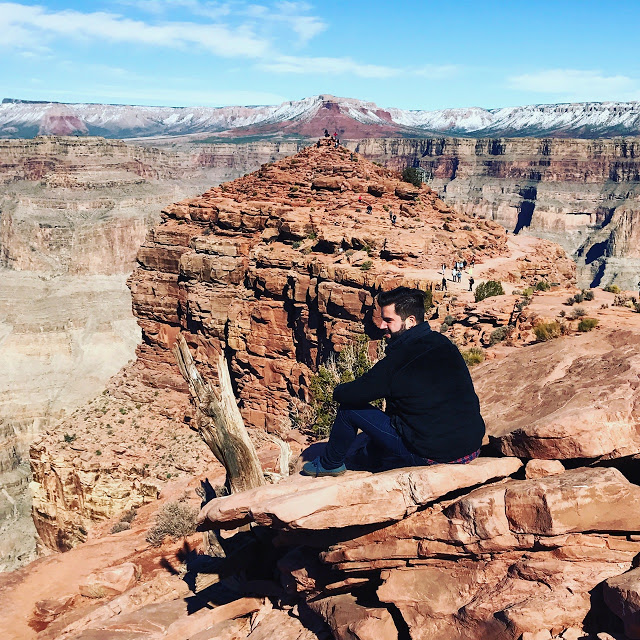 On the way back to Vegas we stopped at a hole-in-the-wall bar in Meadville and had an awesome Bloody while we chatted with the bartender about Chicago politics.

Back in the city we took a quick stroll down the Strip, at which point I was reminded why I do not enjoy the Strip. So we quickly went back to our hotel room to shower and get ready for the night. 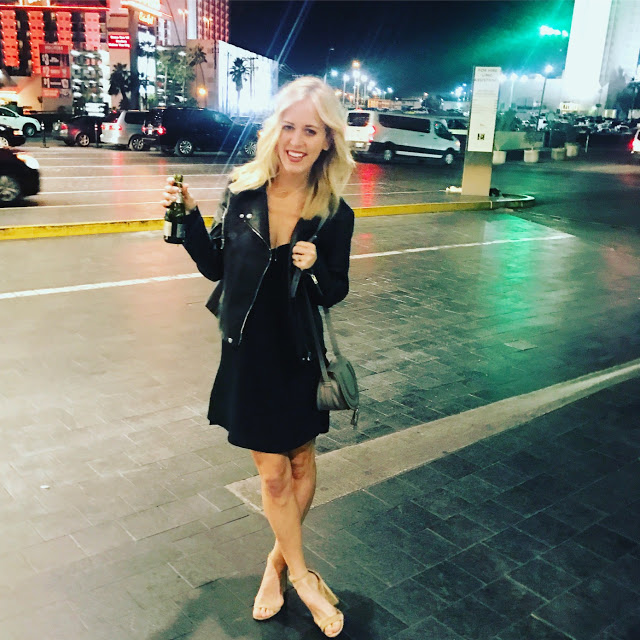 All of the shows we wanted to see were sold out so instead we made reservations to eat at the Aria and try our luck at Black Jack there. Our luck was good. So good in fact we never should have left our table to go eat dinner because it went down hill fast after that.

We ate too much, lost some chips, found the chips, then immediately lost the chips again when we went “all in” on red, and then called it a night around 11 p.m. due to poor spirits.

Vegas, what can you do?!

We brunched and drove to old Las Vegas which I think I like a lot more than new Vegas. We rented a convertible so I insisted we drive down the strip with the top down while blasting Elvis and Frank Sinatra to ensure everyone knew we were tourists. We achieved our goal!

Before going to the airport we had a very gross, yet delicious, plate of nachos from the iconic Peppermill to tide us over the for 3.5 hour flight.

All in all, we were probably in Vegas for a total of 42 hours. Which was perfect, if not just an hour or two too long… The only thing better than going to Vegas is leaving Vegas, right?! However, we’re already planning a trip back to check out more of the cool scenic parks outside of the city.

And that was our weekend in a nutshell.

Cuba is next on the list and we’re actually trying to plan for this trip, so if you have suggestions let us know!