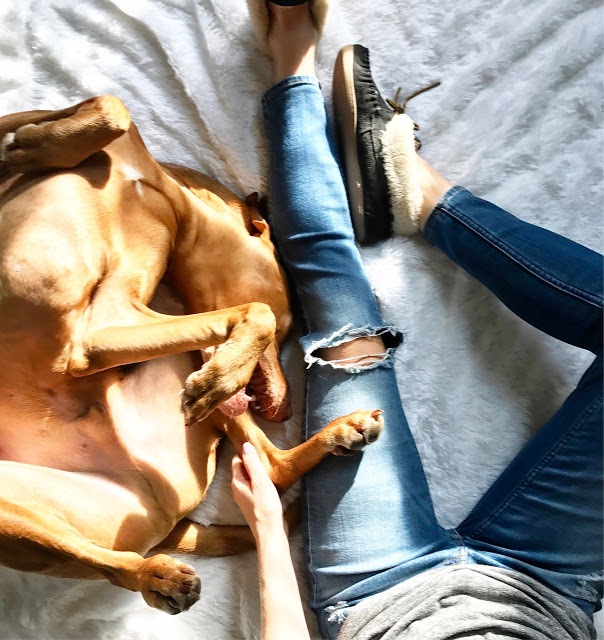 Let me just state that Harlow and I love our new place. Can I still call it “new” by the way? We’ve only been here three months so I think yes.

He loves being on the top floor so that he can look out the window (from the top of the staircase) and talk shit to the mailman several floors down, on the sidewalk. It’s really an unfair advantage, but that doesn’t stop Harlow.

Our new neighborhood also has several more stray cats than our previous one did so that’s been “fun” for Harlow, as well… You can tell they’re tough cats when a dog passes by and they don’t even flinch or move but instead give a glare that says, “what’chu gonna do about it?”

It’s also nice to finally live in a home that gets sunlight and doesn’t feel like a damp, dark dungeon. Natural light is hard to come by in city apartments.

As I said, it’s been a good move from our previous apartments. That is until we have a night like last night… All of our other places have been on the first floor and have had a yard (albeit a small one) but it was still useful.

Harlow doesn’t get up in the middle of the night, so I know when he jumped out of bed at 4:00 a.m. I knew something must be up. I let him out on the rooftop to use his puppy pad- something we use as a last resort in the winter since the hose is turned off, but the second he got out there he looked at me like, “I don’t think you want to do what I’m about to do on this fake grass..”

So we both sprinted downstairs to grab his leash, I grabbed whatever coat I could find, and then hauled ass outside in my slippers before it was too late.

I’ll spare you the details, but between the hours of 4:00- 6:00 a.m. the poor guy had to go outside 8 different times. It was dark and cold and just starting to snow a bit as I walked him up and down the block over and over. All that I could think about for those two hours was how having a yard would be pretty damn nice in a moment like this.

So I hope that all of you dog owners with backyards know how good you have it! Don’t ever take it for granted. I’m not complaining (well I am a little because I’m tired) but sometimes having a dog in the city is just a little more work than I knew it would be.

On the bright side (for Harlow) since he’s never had a big yard he simply doesn’t know life without 3-5 walks a day and at least 2 stops at the park. Even when we go to Nebraska and my parents have a nice big yard for him to play in he still uses it for bathroom breaks only and then will come inside and be like, “time for the park now, yes?”


Anyway, I always feel so bad when dogs are sick because they have to practice so much self control waiting on their owner to get their ass moving so they can get outside. It makes me sad to think of dogs who are left alone for long periods of time and have no choice but to go inside and then will probably get punished because of it. I don’t know why mind goes to those what-if situations but it does.

Back to happy thoughts of nice dogs with good owners.

The good news is that today is February. We made it through January! How many more days until spring?