Don’t worry, Crazy Pants over here will fill you in. But first we have to go back six years ago to May 20th, 2011.

Chris and I are living in Topeka, Kansas. We have a crazy puppy named Harlow who runs zoomies around the house and never settles down because his energy level is at an eleven all. day. long. 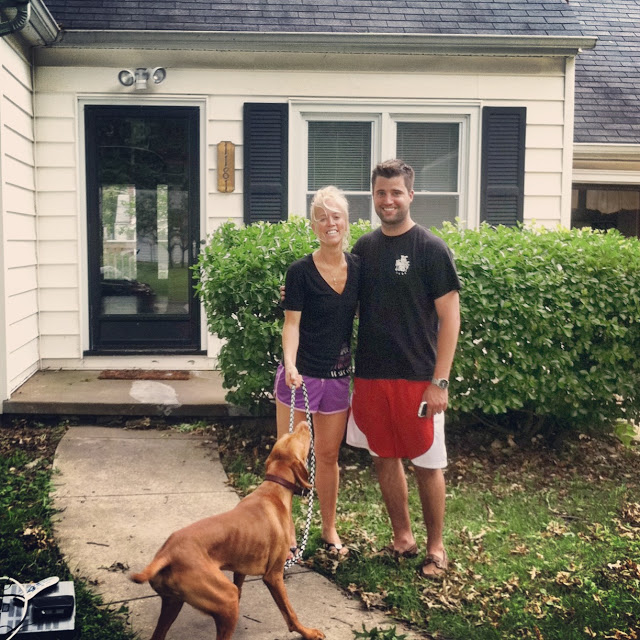 We live in small white house two blocks away from Westboro Baptist Church. We had a nice three bedroom apartment just a month previous, but were randomly evicted and had to leave immediately due to a crazy puppy named Harlow… And yes, I fed Harlow when he was a puppy. But when you run a total of 100 miles every day all over the house, your ribs will show. He ate like a horse.

We don’t love Topeka, so in less than a week we’re moving to Chicago. I am so excited but so nervous. I’ve always wanted to live in Chicago so the fact it’s actually happening makes me think it’s too good to be true. Like the night before my family went to Disney World and my mom and brother disappeared for two hours and I was sure they’d gotten in a car accident and our trip would be ruined. (I had priorities.)

Turns out they were just having too much fun at Wal Mart. Per the usual.

But my fear in 2011 was real. So real in fact, I researched it every night. Knew every detail. Read every article. Watched every news clip.

Evangelist Harold Camping predicted that on May 21st, 2011 the “rapture” would take place, followed by the end of the world on October 21, 2011.

And I, Taylor Wolfe, believed there was a small chance he may actually be right.

Chris knew my fear, but he laughed it off thinking it was just another crazy “comedy bit” of mine. So I pretended I was “jokingly scared,” as well. But in reality, I was scared.

I’m a pretty logical-ish person, so I’m not sure where this belief came from. Watching too many episodes of Doomsday Preppers on TV? Sure. Perhaps too many History Channel episodes focusing on the apocalypse. Maybe. Or was it being raised in the Catholic church? A place where I was frequently told it was not a matter of IF the rapture would happen, but WHEN. Da da dahhhhh.


As a kid I remember seeing a bumper sticker on a car that read “WARNING: If rapture happens driver will be disappear.”


That shit stuck with me.

Now I wasn’t just afraid of the rapture. I was afraid of car accidents, too. (see above paragraph about Disney.)

I said my own prayers every night as a kid, and I had a LONG list of worries I needed God to take care of, and I quickly added “please don’t let the rapture happen to me or my cats. or any car accidents,” to my list.

I figured my family was saying their own prayers about the rapture so they were good. But my cats? I couldn’t be certain.

So I guess it does make a little sense why I was so terrified of this rapture as an adult.

On the night of May 20th, just a few days before I was set to start my “cool big city life” in Chicago, I wasn’t sure what the next day would bring. I couldn’t close my eyes I was so scared. But at some point I grew tired and eventually fell asleep (probably while saying Our Fathers and Hail Marys because you can leave the catholic church, but it won’t leave you.)

And I’ll never forget the joy of waking up on May 21st, 2011 to a world that was still intact.

I was alive! And with a whole new lease on life. The world was my oyster! It was as good as the day I got released from my six day MDS medical study I did in college. I felt free!

So every year on May 21st I remember Harold Camping day.

And I also remember I shouldn’t believe when an evangelist christian radio broadcaster predicts the apocalypse will happen.

When was the last time you thought the world would end? Let me guess, Y2K?