We went camping in Wisconsin about seven days ago and I’ve been trying to write this post ever since. Unfortunately, I seemed to encounter a few  “hiccups” last week that kept demanding my attention and thus here we are seven days later. As I’m sure you expected, all hiccups were t-shirt related. Imagine that. They were a little bigger than usual and much more annoying. And I hate to be that vague blogger who mentions something but doesn’t go into detail, and yet that’s what I have to do (for the time being.) Until I get the words I want to say just right, I have to stay mum for a bit.

Because I’m sure you’re all just dying to know the T-Shirt drama, right? My life is sooooo interesting.

So we got to Wisconsin last week on Friday evening, pulled into our campsite, and the first thing I did was grab a brochure. And on that brochure was the photo of a black bear.

At which point I shoved the brochure in his face, “BEARS. You said nothing about bears being here.“

“This brochure begs to differ,” I flipped through it and noticed not one, but three, THREE I tell you, photos of black bears.

“They’re way north of us, don’t worry about it.”

And for the rest of the weekend, I did the exact opposite.

I get that people camp in bear country all the time. However, that doesn’t mean I understand it, nor was I prepared to do it. Would we have to throw our garbage in a tree? Or burn it? Or shout “HEY BEAR!” if we heard something rustling in the woods at night (we watch ALONE every week so I know what to shout.)

When we got to our actual tent spot, a beautiful place just twenty feet from a river, I noticed another tourist board informing campers of other wildlife in the area. Creatures such as wolves. Elk. And Fisher Cats (google them, they’re terrifying.) I knew at that moment I was going to have to drink a lot of wine if I stood any chance of falling asleep that night.

We set up our tent (it’s one of those where you just throw it in the air and it happens on its own) made a campfire, and bickered at each other like couples do on a camping vacation,

And then we were happy again.

Until I woke up at 2:30 a.m. and couldn’t fall back asleep as I thought of all of the things just outside our thin green tent that were most likely about to kill me. Harlow felt my nervous energy because he couldn’t sleep either. Instead he’d move from bottom of our sleeping bag, back to the top, to the bottom, to the middle, to the top, over and over again.

When the sun finally hit the sky I was happy to be alive and Harlow was happy it was play time again. 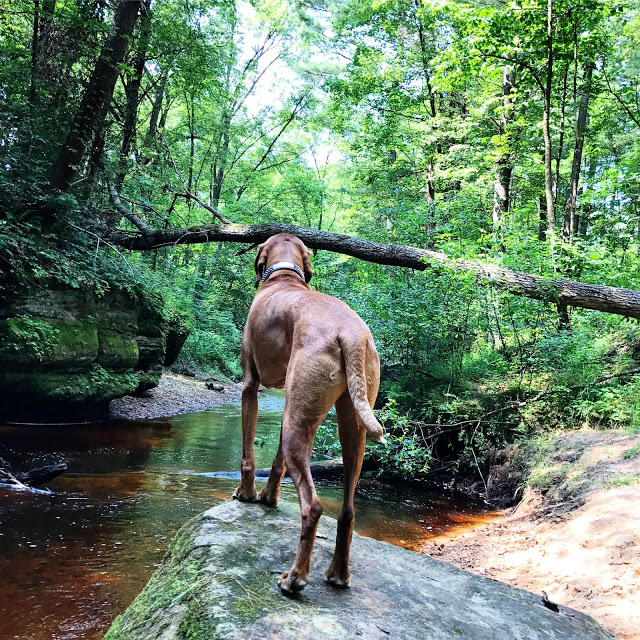 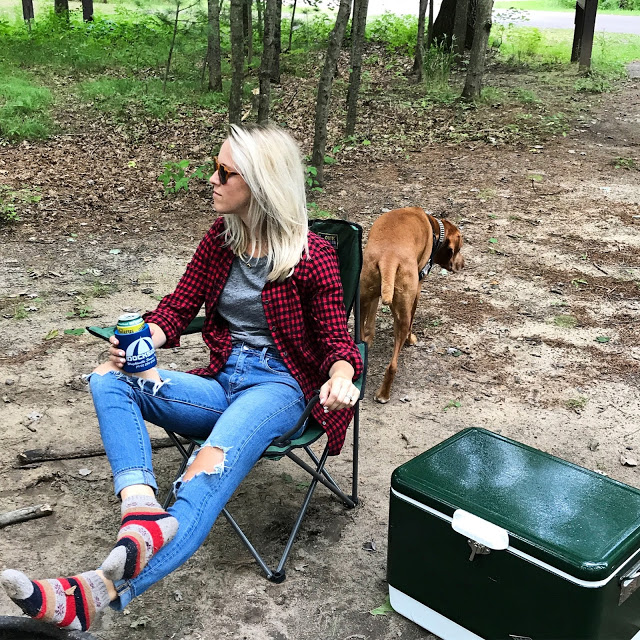 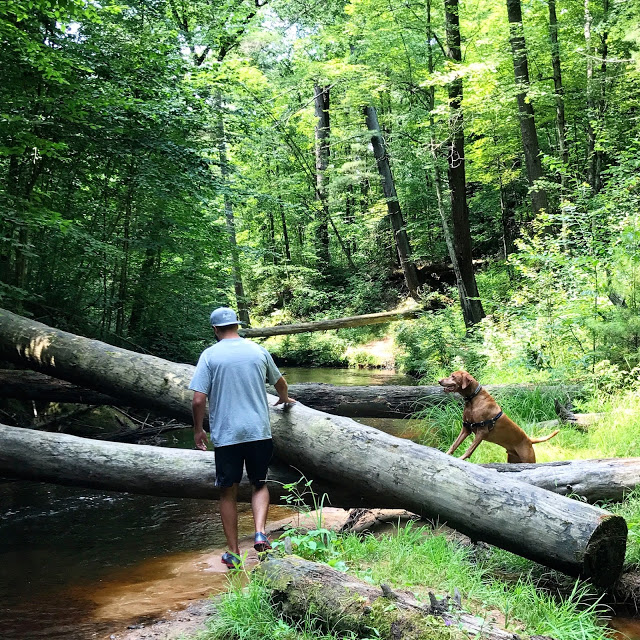 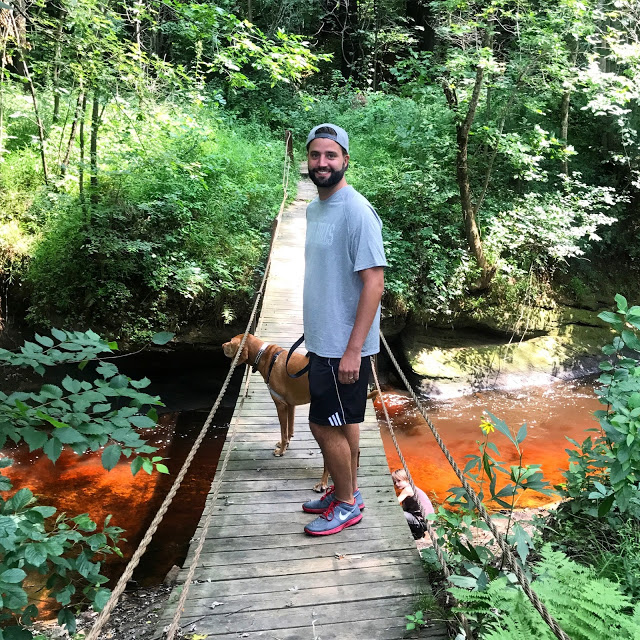 These two had a blast. Here they are crossing the lava bridge. If you look closely you’ll see there’s even a small troll hiding underneath. Luckily, we solved his riddles and were allowed to cross.

And if you’re wondering why I’m in a flannel and thermal socks in August, it’s because the temps were in the low 70s/high 60s (low 50s at night.) 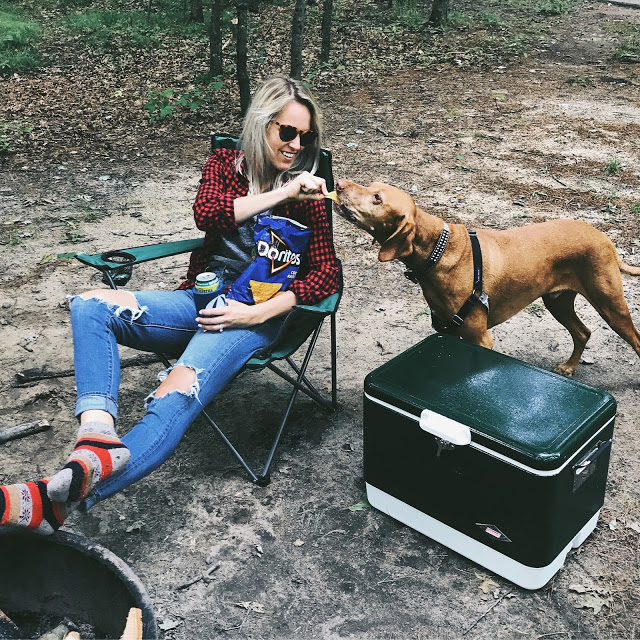 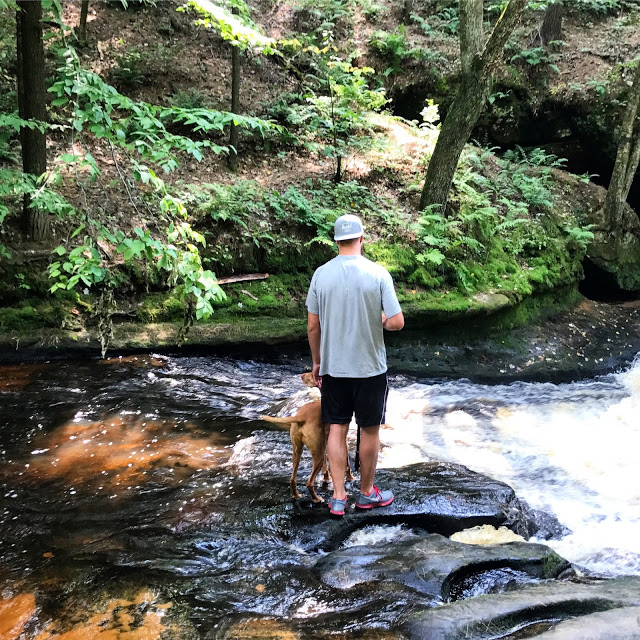 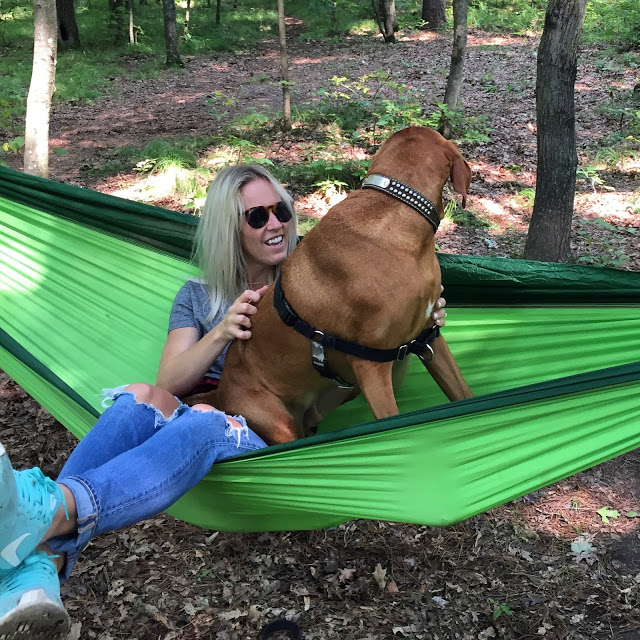 We camped in Black River Forest, and other than the bear thing, I would really recommend it if camping is your thing. And just for the record, no one seemed to be scared of bears except me, so perhaps they were pretty far North of us, after all. But you never know! 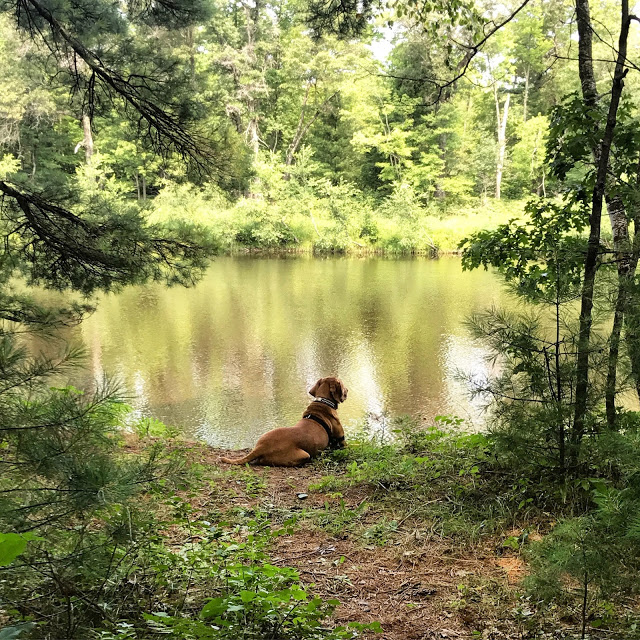 And yes, Harlow had the time of his life. He acted like he was Bear Grylls during the day; catching fish in the river, eating leaves off the ground, making a canoe out of bark.

Yet when dusk moved in… he would hightail it for the tent and look at us like, “you guys, let’s get inside! what are we a bunch of animals?!” 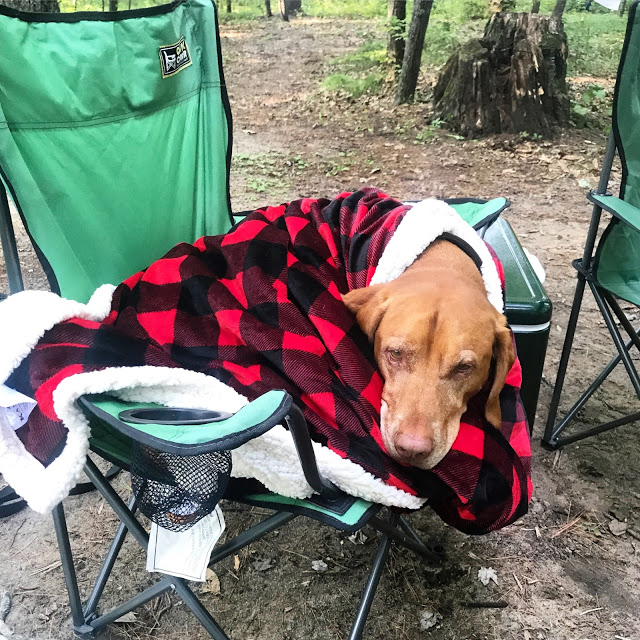 You can’t see it, but under this fleece blanket he’s also wearing fleece footie pajamas. He can’t help it if his body temps always run cold!

I’m going to call it a day here because I think you get the picture. We camped, it was fun, I ate a lot of chips and beer. Chris is trying to book another trip for next weekend and I’m trying to convince him booking a cabin would be just as (if NOT) more fun…

Big week on the docket, guys. Friday I’m doing my first comedy show in my hometown (OH BOY.) And tomorrow I’m writing a post called, “oh shit I’m getting older, what kind of skin products should I use?” Like I said, BIG. WEEK.