My tenth birthday was supposed to be the highlight of my life.

Not only was I finally hitting double digits, but my second front tooth had come in after being absent for nearly two years, my chin no longer drooped after my parents “caved” and gave me the cyst removal surgery I’d been begging for since Christmas, and to top it all off; I had officially kicked my candy cigarette habit and was ready to start a new life as a healthy young ten year old!

So like I said, things were looking up for this old broad.

To celebrate, my family was taking a trip to Disney World, and we were staying at the very swanky Wilderness Lodge. A resort with not just one waterslide, but TWO. And my special guest of honor, Olivia Alexis, my very first American Girl Doll made to look just like me, would also be making the trip. I was so excited for this vacation, I watched the VHS tape about Disney resorts (something a sales rep sent to our home after I called some random 800 number I saw on TV) almost every single night leading up to our departure.

Celebrating a tenth birthday in Disney World? How could things possibly go wrong?

Just you wait. Behind this smiling face and collared sweater tank top lies a mountain of sadness. (And also two very poorly executed “french braids.”) The left one is a clearly a good inch longer than the right. Nice effort, mom. 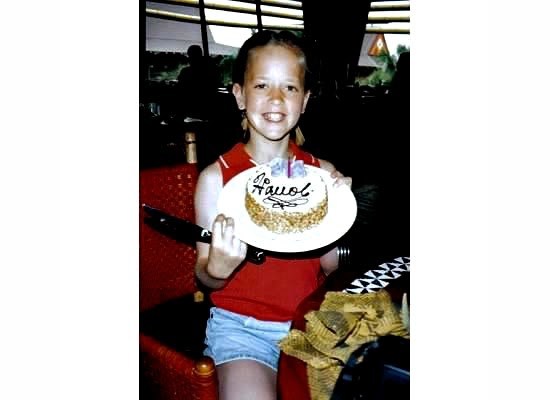 I won’t even touch on the fact I’ve never liked coconut cake yet that’s what the waitress brought me. What ten year old likes coconut? None of them.

And it’s taken me twenty years to figure out that the cake says, “Hau’oli,” which means, “happiness.” What. A. Joke.

Merely seconds after this photo was snapped, I was about to burst into tears for just the first time of many that day. Because here’s the thing, I wasn’t supposed to be eating gross coconut cake in the hotel restaurant on my birthday in the first place. What I was supposed to be doing was having breakfast with all of the Disney princesses at Cinderella’s Castle, but my parents’ alarm didn’t go off and so we all slept through it. Or so they said…

Takeaway number one: if you miss a birthday breakfast with a room full of princesses, the rest of the day is only destined to go downhill.

Naturally I was devastated to learn that I wouldn’t get the breakfast with the celebrities I was promised, but I slapped on a good face anyway. “Put your best tooth forward Tay, you got this,” I told myself.

My mom insisted I bring my autograph book to breakfast, something I had bought special for this trip, which at this point only had signatures from her, my dad, and a page ripped out where my brother wrote various forms of the word FART all over it, which had already caused some major drama.

“Don’t worry,” she insisted, “we’ll get you some good autographs.”

Determined to follow up on her word, my mom insisted I join the children’s parade in the hotel restaurant so I could get a chance to dance with the “famous” Disney characters that were promised to join the breakfast buffet room at any moment.

Do you know who “dances” with Disney characters in a restaurant? Babies and toddlers. I was neither. I was TEN. Yet there I was, the only large child marching around a restaurant with a line full of wobbly toddlers on their unsteady legs, bobbing their huge dumb heads to the music as the “famous characters” burst through the door.

I was MORTIFIED. It was almost as bad at the Cruise Limbo contest which would happen in approximately four more years.

Also, ten different versions of Goofy is not what I consider famous. And thus the reason for the first set of tears. I was beyond humiliated (and it’s all on video tape because my mom recorded the entire thing) right up until the moment I came sulking over to the table and planted my hand in front of the camera shouting “Turn it off! Turn this thing off!”

I went back to our room and cleaned myself up a bit before heading to the parks. “I’m trying to remain rational, Olivia, I am. But it’s hard. I just had higher expectations for this morning, certainly you understand,” I said to Olivia Alexis while I brushed her hair and she brushed mine.

Little did I know, the next set of tears were just a few hours away.

We had just gotten off the Disney trolley and were heading into the park when my mom discovered that her sunglasses had accidentally been left on the trolley. And whom did she blame? The birthday girl. Who else?! Technically I had asked to wear them on the ride over, but how was I supposed to know that she didn’t see my set them beside her leg?

Did everyone forget it was MY birthday? I did not deserve this treatment.

Once inside the park things only got worse. My sister and brother were being snotty as usual and chose to only ride with each other, forcing me to ride alone. When I would politely remind them that this was MY BIRTHDAY trip they would roll their eyes and say, “No. No, it’s not. It’s a collective trip since all of our birthdays are in May.”

More disappointments came at lunch when I didn’t get to eat at Johnny Rockets because the line was “too long,” (according to my parents.) All I wanted was a $16 soda in a tall plastic cup with a swirly straw. Was that so much to ask? WAS IT?

And no one even cared that my feet were in immense pain because my new Dr. Marten sandals were giving me blisters.

No one wants blisters on their birthday. This was insanity.

After the terrible day at the Disney park (where literally no one acknowledged it was my birthday, and I didn’t see Michelle Tanner once, or a magic lamp,) all I wanted to do was get back to the resort. I wanted nothing more than to kick back on my hotel bunk bed and look out the window over the pond, so I could watch the little sea otters swim. It was really all I had left at this point. But of course my demanding family wouldn’t even allow for this.

“I just want to watch the otters swim for a minute, is that okay?” I asked.

“Why don’t you just go live with the sea otters if you like them so much? Nobody wants you here anyway,” my brother chided. And then my sister joined in, “yeah, go live at the pond, why don’t cha?” And eventually I think my parents started in on me too. They all insisted I pack my bags and go spend the rest of my birthday vacation with the otters at the pond.

I would be happy to, I thought to myself as I rummaged through my suitcase hoping to find the one security candy cig I had packed as a “just in case.”

“Don’t you look at me like that, Olivia Alexis Macintosh the 3rd! I’ve had a shit day,” my hands were shaking by this point, “and it’s not like I’m even going to use it, I just want to feel it on my lips.” Olivia continued to stare at me with her beady little judgmental filled eyes.

“You wouldn’t understand. You’re not even ten!” I fell asleep like that shortly after; a candy cig on my lips, muttering rude insults toward my last standing friend on the trip.

I wish I could say this story has a happy ending but it doesn’t. It just ends a few hours later with my dad yelling at my mom in the rental car for not being a good navigator while he was trying to find our dinner spot. “Just use maps on your phone!” He yelled. Jk jk, we didn’t have phones. It was more like, “Just use the enormous map found in the glove compartment!”

We never found the restaurant where we were supposed to have dinner. Instead, we got lost and drove around for over two hours until we eventually just pulled over at a Carlos O’Kellys attached to a hotel right off the Orlando interstate. I don’t think anyone really spoke through out the entire meal. When the servers came over to sing, “happy happy birthday, from all of us to you … ” they were met with nothing but hostility. It was the most uncomfortable birthday song ever.

I don’t remember much more about the trip after my birthday. Once I turned ten, I got a little jaded about things, I guess.

But I can’t help but wonder how the day would have turned out if we had just made that damn princess breakfast. What kind of butterfly effect might that have caused? Maybe I’d be running Disney by now! Or at the very least not writing blog posts about an incident that happened over twenty years ago.

But to anyone heading to Disney this year, HAVE A BLAST! So excited for you and all of the joyful memories you’re going to make at the happiest place on earth!