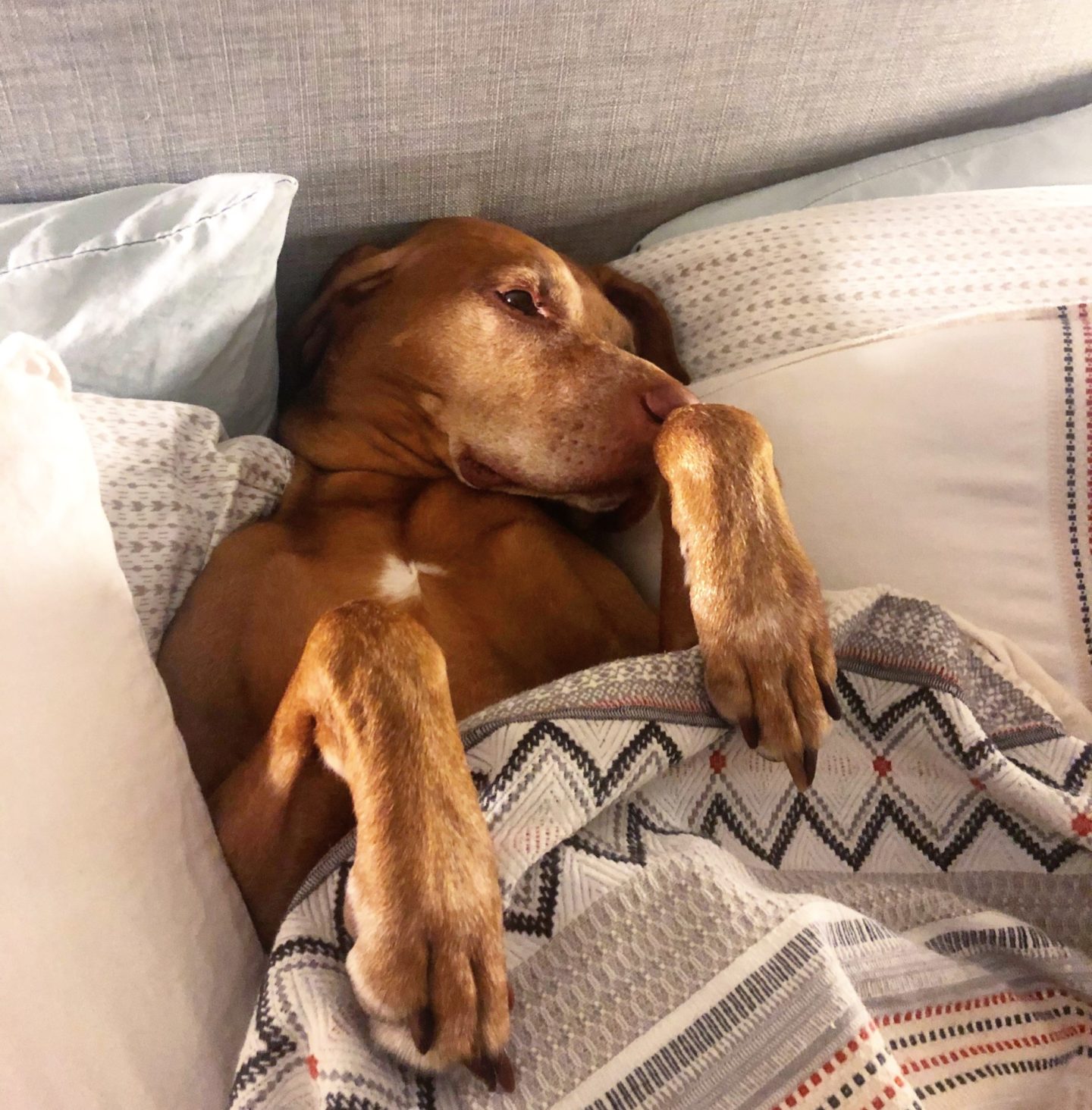 She whispered to herself from bed when she woke up and realized the sky window above was covered with a new icy layer of white snow. Again. This would be 10789th time for the season. She grabbed her phone to confirm the date was indeed the 16th of April. (It was.)

This should not be happening right now, and yet it was.

And so I reluctantly get out of bed and walk down the stairs to begin Groundhog Day 2018 all over again. I grab my fleece leggings from the guest room, the ones that I purchased in 1977 from Tj Maxx and vow to get rid of at the conclusion of every winter, but never actually follow through with because although they are hideously ugly, they are so damn warm. So what if the hole near the knee is starting to spread? It gives them character.

After the leggings, it’s time for the wool socks. Should I wear the green ones today? Or the red ones? I wonder while Harlow stands at my side thinking, who gives a shit? Just put them on so we can go.

I go with the green ones because I’m feeling nostalgic. Because back in the olden days, a time before the Winter of 2018, (BW18 as the people call it now,) April was a month when green would sprout from the ground.

He shakes his head no and tells me to stop daydreaming.

He’s right. So I put on my hat and gloves and parka.

“I’ve put my parka ‘away for the season’ three times now!” I say to no one.  “It’s a fun little game I like to play with myself. Unfortunately, my record is 0-3 at the moment.” And then I cackle alone like the old winter witch I’ve turned into.

After I’ve told my jokes, Harlow and I begin our descent outside; into the world of snow flurries, icy windshields, and an overall feeling of never ending greyness lurking all around. Everyone I see has the same look as me: defeat mixed with frustration mixed with sadness. But we don’t acknowledge each other, we just keep our heads to the ground, focused on our salt stained boots and sneakers, shuffling one step in front of the other on the slushy pavement.

Harlow and I get to the park and the snow has started to fall even harder, as have our spirits. I let him off his leash to run but he just looks at me.

He lowers his head and his ears fall, “I can’t do this snow shit, anymore. It’s just too much.”

“I agree, but what are our other options?” We both look around the park and not another soul is in sight. Only snow and frozen mounds of brown… dirt?

Whatever the case, we’ve been stuck in a time warp. A time warp that involves me checking my Ten Day Weather Forecast religiously just hoping for that one small sliver of hope that reads, “sunshine and 70s.” And I say things like, “are you kidding me?” when I don’t get the results I want, well aware, that no one is ever kidding.

Because no one has been kidding about the weather in all of 2018. In fact, this shall be known as the year we all stopped kidding for good.

But what was I saying at the start of this post? Oh yes, Winter 2018 has not broken me… You have my word that that will be my last post about it. I promise.

Coming tomorrow: How To Wear a Spring Hat!

What? How?! Come back tomorrow to find out!