I seem to have a good old fashioned case of writers/bloggers block going on at the moment. I have a lot of post ideas (and they’re like really good, life-changing ideas, trust me) but when I sit down to hash them out, the words seem stuck. I’ll start and stop a new paragraph at least ten times before I say screw it and take Harlow on a walk to “decompress.”

So in an attempt to unblock myself, I’m going to dabble in a little “summer essay series.” If you know anything about my series, you know this could mean I’ll write one essay, or five. (But most likely it will be two.)

This first one is called, The Summer of Sims.

And this is photo is a good visual for me during this time in my life.

Braces: killing it. Curled under hair: Nailed it. Partly shaved eyebrows: loves it. 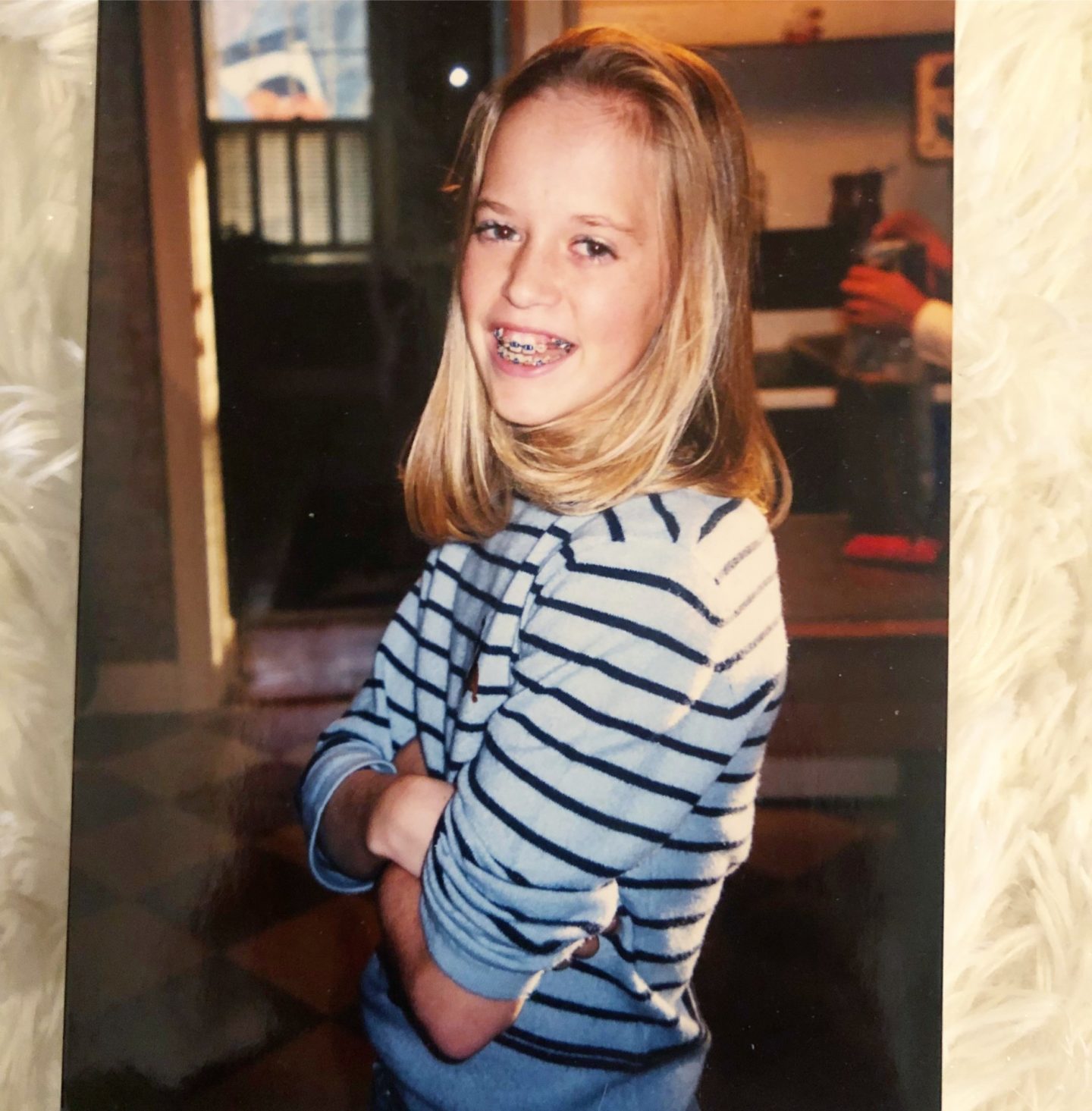 I’ve never been a gamer.

Well, unless you count the Christmas when my parents got my brother and I a Nintendo 64 and we both got really into Mario Go Karts and Aladdin. We spent our entire winter break glued to the white television set in my room playing game after game, fighting over who got to be Yoshi, or stealing bread and flying magic carpets as Aladdin.

But that was just a small blip in my life because eventually the Nintendo was moved into my brother’s room and naturally I wasn’t allowed in there. And so my gaming days were cut short.

Until about seven years later, during the summer of 2001, when I inherited an old computer from my mom’s office that was about the size of our current guest room, and I started a playing a new game called The Sims.

And by “playing” I mean I zoning in on my computer from roughly 9 p.m.-3 a.m. every single night until my eyes were sore and my head was throbbing. By the time I’d force myself to sign off, I’d dream in Sims language. Even just writing this makes the words come back to me, Zabaducci! Comesnatta?

From the second I found this fictional world, I jumped into it hard. I didn’t play Rollercoaster Sims, or City Building Sims, or any of that fancy stuff. I stuck to good old fashioned people storylines I created in my head. I knew my characters inside and out. I knew their likes, dislikes, and I made sure they all had very heavy plot lines. Like, they’d been through some shit, you know what I’m saying?

It was kind of like digital Barbies for me. (Because yes, my Barbie storylines were also incredibly dramatic.)

Time for a little side note: I used to sneak playing Barbies in my closet until I was … probably a little too old to play Barbies in a closet. I could play for hours and hours making up so much fun drama and new plot points. However, it eventually became far too hard and stressful to hide my secret habit of Barbie playing so I knew it was time to switch to a more “socially norm” fictional world for my age- enter The Sims.

I’m quite judgy about violent video games today and am not a fan, however it would be hypocritical of me not to admit I had my sadistic little ways of “ending storylines” back in Simland. And if that’s too much to admit just let me know and I’ll edit this out later. (I was an angsty little teen.)

There was also the romantic scenes in the Sims hot tub. Keep in mind this was back in the PG days of Sims, just some light groping and maybe a few heart bubbles, while romantic music played overhead. I’ve heard things have gotten a little more R rated in Simland these days, which is just pretty weird to me, but to each their own story line, I suppose.

But the thing I found most exhausting about playing Sims was maintaining friendships. If you didn’t call or see the people your Sim liked at least once a day they’d get points taken away and eventually become depressed. This is pretty amusing to me now given my current state of hermitness. The writing was always on the wall.

I hope in today’s Sim World there’s characters who actually get stimulated and happy from ample time of being on their own. Maybe they have a dog they talk to all day, or… or… just enjoy their quiet time, okay?!

I’m not sure what ended the Summer of Sims. Perhaps I met a real life friend? I think if I looked back at my friend circle during this time (the middle school era) which meant I had a new best friend (or frenemy) every other day.

Anyone else remember the exhausting friend cycle of being a middle schooler? My “clique” changed from one minute to the next.

You like my gel pens? Cool. You’re my new best friend.

You don’t like my butterfly clip? Hate you. Never call my home phone again.

Now it takes me roughly 4-5 years to work up the courage to have a new friend, (or leave an old one.)

Growing up is weird. So is this post. It was very self indulgent, but it got my fingers moving and for that I’m thankful. If there’s any other Simmers out there, which game was your favorite? Also, ROSEBUD. (Inside Sims joke, don’t worry about it.)