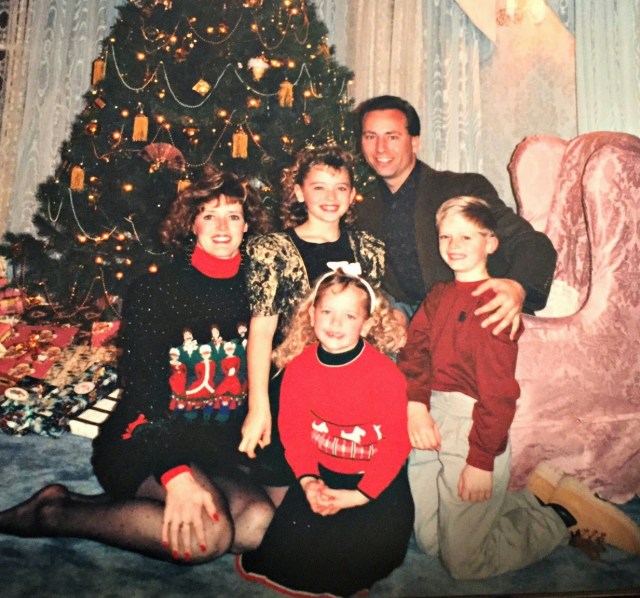 “I heard jingle bells,” my brother said. “He’s definitely back.”

Once again, all three of us crawled on our hands and knees toward the front window in attempt to get a better look at the maniac in the red suit who wouldn’t leave us alone.

“Maybe he came back to get the tree?” Jade peeked over the ledge of the shutter at the same time the strange man on the porch shouted, “Ho, ho, ho!”

“Get down!” We shrieked, but the damage had been done.

“Oh no,” Jade slid back down the wall, “I think he saw me,” her eyes were wide with fear.

“It’s just Santa, kiddos! I’m not here to sell anything, I swear!”

We all looked to each other in confusion, “THEN WHY IS HE HERE?” One of us said, or maybe all three of us said it, I’m not sure. All I know is that we agreed in that moment that this was getting worse by the second.

We army crawled away from the window and tried to plan what to do next. It was clear the crazy man knew we were in the house, so that left us with only two options. 1. Call cops. 2. Stab Santa.

In a quick daring move, my brother suddenly bolted up to his bedroom and Jade and I both knew what he was doing; getting more knives. For a young child, Jordan had an extensive pocket knife collection, one that may raise a few eyebrows today. But that’s neither here nor there, because like I said, it was the 90s.

Armed with his best Swiss Army knife, as well as a weird old antique knife he’d gotten as a birthday gift from our grandpa, Jordan inched closer to the front door than any of us had been brave enough to do.

“Don’t be a hero!” I shouted, but it was too late. He was opening the door just a crack, deadbolt chain still attached, obviously.

“Take your tree and leave!” My brother insisted.

“No, no, no. It’s not mine. It’s yours! It’s your tree!” Santa laughed nervously, “It’s a Christmas surprise!” He glanced behind his back toward my parents car, which unbeknownst to us, had began inching its way toward the house.

“This is ridiculous,” my mom said, “what is taking so long? Has this guy ever delivered a tree before?”

“I have no idea, let’s just go take the damn thing in ourselves,” my dad griped as he pulled around the corner and Santa came into view.

“Wait, is he signaling toward us?”

“I think he’s saying ‘hold up.’ Maybe he’s finally getting in.”

And so my parents proceeded to sit in the car and wait as the man dressed in the Santa suit desperately tried to get their attention and beg them to come forward, so their small child with the knife collection would not attack him.

Back at home, my brother quickly slammed the door in Santa’s face and crawled back to my sister and I to report what he had learned.

“I can’t be sure, but I think he’s working with more people.”

“What? Why?” My sister pleaded, her fingers already dancing over the number nine.

“He was signaling to someone. He didn’t want me to see, but I did. And that’s when I slammed the door shut.”

“The three of us could take down one Santa,” Jordan contemplated. “But I’ll be real honest, I don’t know about a pack of them.” He was right and we all knew it.

When backed into a corner, we finally decided that calling the police seemed too dramatic, stabbing several Santas felt a little aggressive, and so our last resort was to slip out the back door, creep around the side bushes, and wait it out from the neighbor’s yard.

“I’ve had enough of this guy,” my mom said. “I need to get inside and set up Christmas. I still have to do the space above the kitchen cabinets!”

At the same moment my parents were tired of waiting, my dad spotted the three of us creeping around the side of the house.

“Look!” He pointed our direction, “those damn kids were sneaking off to the gas station again!”

“They’re back!” We cheered.

And then we ran to their car like our lives depended on it.

Confused and slightly irritated, my dad opted to roll down his window instead. “Get out of the street,” he barked. “What are you guys doing out here?”

“Jordan, do you have knives in your hand?” My mom asked, also more irritated than worried.

“There is a creepy guy knocking on our door and he won’t go away and we didn’t know what to do,” Jade explained, probably on the brink of tears, upset she might be in trouble now. Whereas my brother and myself were getting pissed my parents were being so inconsiderate considering the situation.

“Calm down, we hired him,” my mom responded with a heavy eye roll.

“To kill us?!” Jordan shrieked.

“I knew this was a bad idea,” my dad muttered. “We leave them home alone for one hour and they’re running in the streets with knives.”

In the end, my parents apologized to Santa, sent him on his way, and brought the tree in themselves.

Like I said, it was the 90s. So what really happened is that my parents still insisted Santa bring the tree inside. And my brother, sister, and myself were going to enjoy the Christmas surprise, because they paid for this service damn it, so we better feel nothing but pure holiday joy in the process.

So we stood with plastered smiles on our faces as the man we just thought was going to kill us, paraded through our home with a FRASER Fir on his back, shouting ho ho ho, while constantly looking behind his own shoulder, nervous the demonic child with knives was going to jump on his back like a spider monkey and attack at any second.

It truly was a Christmas surprise we’d never forget.

But I heard him exclaim, ere he drove out of sight—
“Happy Christmas to all, and I’m quitting this delivery job and going to work at the mall! Because this is some bullshit. Why does a small child have a knife collection? WHY?”