I might be in a funk. I also said that word too much and now it looks/sounds really odd to me so I won’t say it again.

You ever find yourself lost in a sea of bad news and it’s just one thing after the other and even though you remind yourself that you should feel grateful because most of these events haven’t directly affected you, you end just feeling even crappier because who are you to feel bad when you still have a dry house or loved ones alive and YEAH I’M IN A FUNK.

I said it again.

It’s Monday, I’m kinda sick (and whiny) and the images of the shootings in New Zealand and also the flooding in Nebraska are filling my newsfeed and it’s heavy. I should step away, but instead I usually dig deeper. I look for the personal stories and I don’t stop until I know all of the sad details.

Have you met Craig and Ollie? They live near Columbus, Nebraska and last Thursday they had only a few hours to choose what to take with them in a couple of bags, and then evacuate their home on a rescue boat. 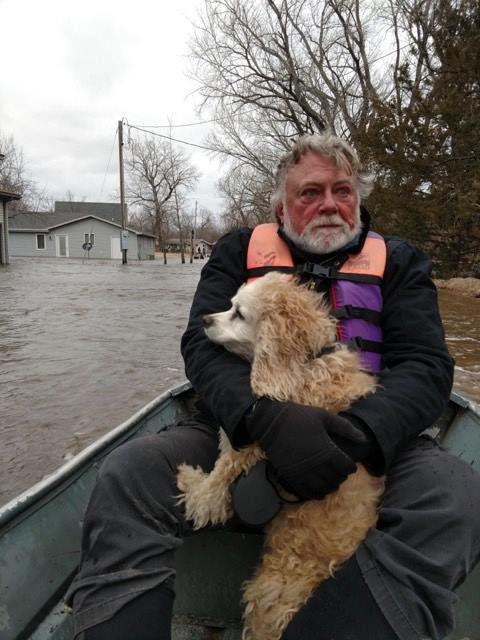 Craig said all he was thinking about at the moment Julie took the picture was to hold on tightly to their 16-year-old dear dog, who is blind and deaf. –Lincoln Journal Star.

What do you take with you if a police officer knocks on your door and says you have thirty minutes to evacuate and there’s a chance anything left behind might be destroyed forever? What makes the cut? What doesn’t?

Or even worse, what if that knock never happens because you’re at work when it’s time to evacuate, so instead you’re told you don’t even get the option to choose. You don’t get to go home because the streets can’t be driven on anymore. I’ve read this happened to several people in Nebraska, so many pets were forced to be left behind (hopefully in two-story homes) and not tied up outside.

I’ve seen barns full of animals standing in freezing water, some for several days now, that can’t get to safety until the currents go down. 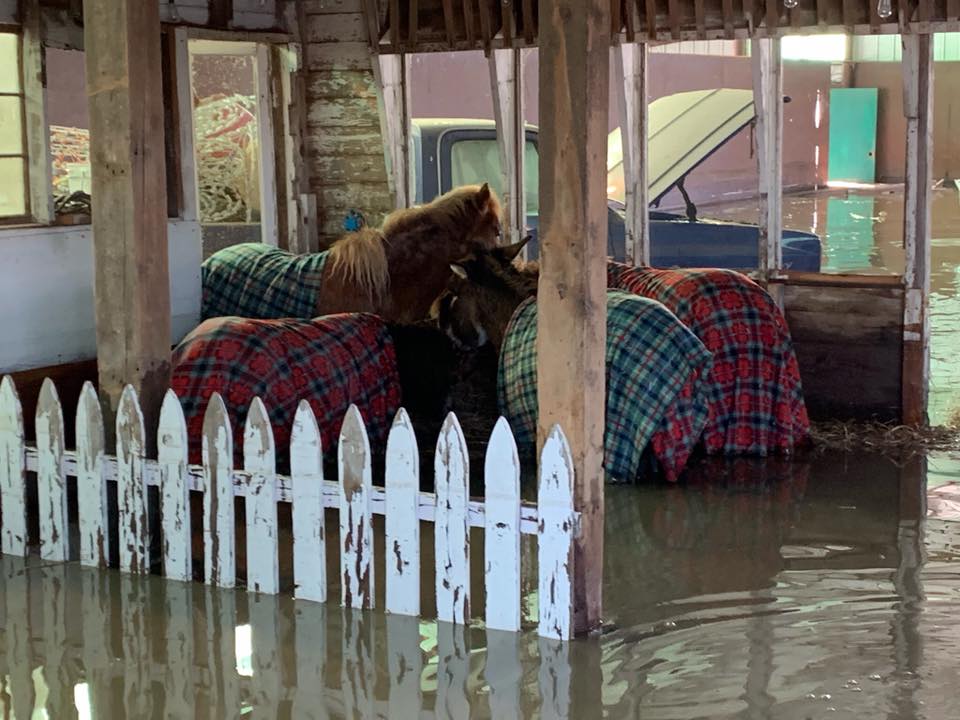 I’ve also seen countless videos of people doing whatever they can to save these huge animals. Hay is being dropped to cattle, donkeys and ponies are being carted away on airboats, people are wading through icy waters at whatever costs to check on the animals they couldn’t get to before their land turned into a raging river.

There’s posts all over Facebook right of people offering up their trailers, their air boats, their dry barns and land, anything they have that can help someone who might need it right now. Because these people know that dwelling about a problem doesn’t help much.

(Hi, I’ve done a lot of dwellling this weekend.)

However, in the four hours it’s taken me to write this short post (moping is very time consuming) I’m ready to get up and do something useful. They always say to “use your resources.” I’m not sure who “they” is exactly, but I’m going to take “their” word on it.

My resources include this blog, a few social channels and …. T-SHIRTS! You guessed it. The screen printing company I use is actually in Norfolk, Nebraska. Norfolk, the town where I grew up, was one that had to be partially evacuated last Thursday when things got bad. My screen printers have offered to partner with me and give a discounted price on shirts so I can send more relief money. Click here to purchase a shirt where $10 from every tee will be sent back to those who need it most at this time.

And I’m happy to report that Craig and Ollie are safe with relatives and their home wasn’t a “total loss,” as they feared.

“He’s the best damn dog I ever had,” Craig said. “He’s sitting here on the seat next to me and just snoozing away. He’s been through a lot.”

To donate to Lusco Farms, click here. I used their image above of the animals huddled together in a barn. From what I’ve read, they saved all of them 🙂