I was sitting in my car outside of Best Buy today waiting to pick up my new iphone after I cracked lucky number 13 and I realized it was May 21st.

It felt like it had some significance in my life but I couldn’t remember why. Until I did. It was the day I (secretly) thought the world (might) end. May 21st, 2011: doomsday for all, according to crazy preacher Harold Camping.

Eight years ago back in Topeker, Kansas I woke up on this day and had never been happier to be ALIVE. I was breathing! The sun was shining and our dream of moving to Chicago was actually coming true. I hadn’t felt this free and alive since I was released from my medical study back in college.

I didn’t go so far as to prepare for the doomsday (give me more credit than that) but to be honest that could also be because I don’t really organize or prepare for much anyway, not even what I thought could be doomsday. Instead, I “jokingly” brought it up to Chris and family members in a manner that was like, “lol isn’t that guy nuts predicting the end of the world? Like seriously, you think he is nuts, right?”

And everyone told me he was nuts.

But still. I wondered. What if he was right… Looking back as I attempt to play therapist to myself, as I often like I do, it’s actually not that unusual I chose this time in my life to believe in a radical cult leader.

For starters, we were about to make a huge life change so I was already feeling a little unhinged. We were leaving Topeker (where we’d been for about six months) to move to Chicago. More importantly, we were leaving the safety and comfort of a quick drive back to our friends and family (“quick” in Nebraska is anything between 2- 5 hours, give or take.)

We were leaving our home. Which for us meant summers spent at the lake, lazy days at my parents pool, fall Saturdays watching college football in Lincoln bars where we knew everyone, long holiday breaks surrounded by friends and family we’d been around our entire life. We were leaving our comfort zone.

Or were we? What if the world ended, instead?

The second part of this is that we lived literally three blocks from an actual cult. So while I despised the monsters of the WBC, (I won’t link them, google them if you want- but then burn your computer) cult talk was very much a part of our Kansas life. I walked the sidewalk surrounding their compound daily and stared into their covered windows wondering what kind of crazy shit they were doing in there. I shall be the one to stop them! I dreamt while walking baby Harlow, whilst also shrieking in fear if so much as a squirrel moved across their yard.

I went to bed on May 20th in our little white rental house in Topeka and wondered what May 21st would bring. (And yes we fed Harlow, he was just a very skinny and very crazy pup as you can see…) 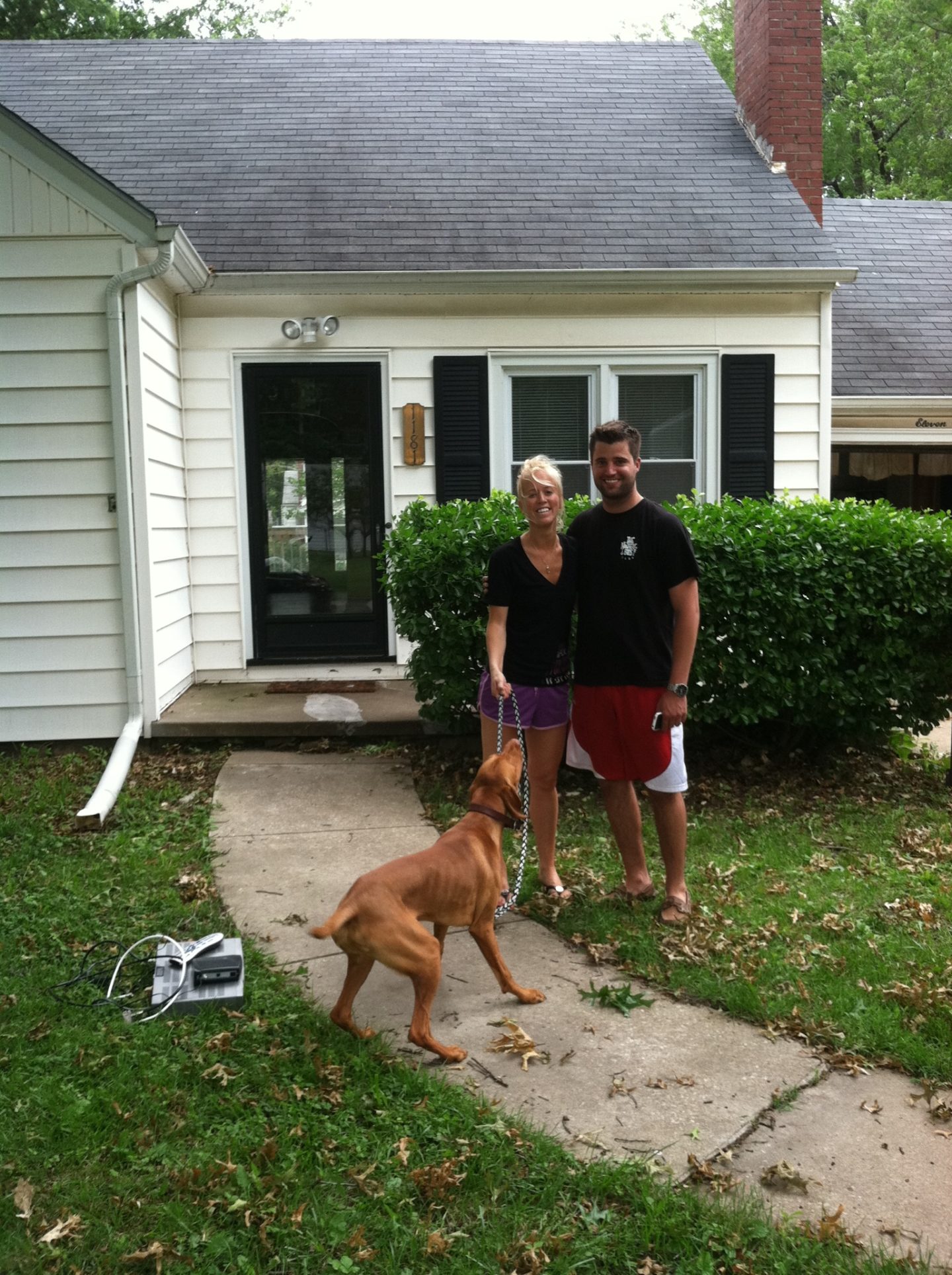 It brought another day. The sun, the sky, Harlow’s millions of toys all over the house, everything was still there. And so our move to Chicago would go as planned. Which was AMAZING! And also scary. So so scary.

I’d been running my mouth all spring about how I wanted to live in a big city and “do big city things” and blah blah blah now I actually had to do it. But I was secretly very nervous we’d call it quits and be back within a year.

Chris and Har driving the UHaul. 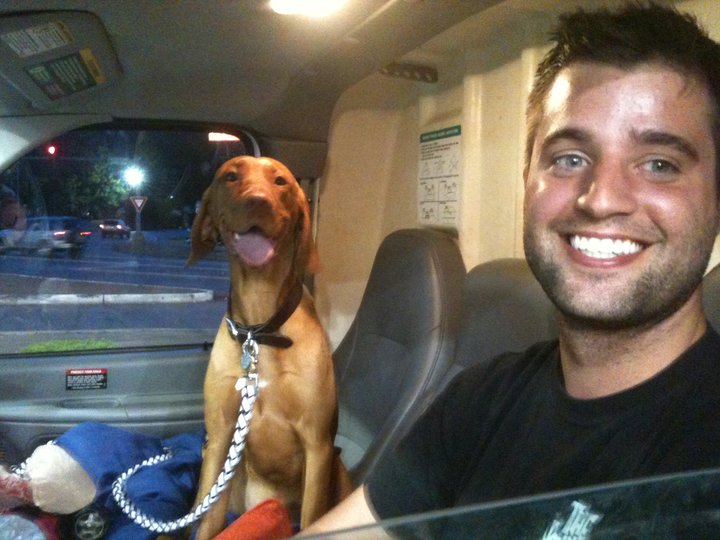 In those first months of moving from rural to city life I wanted to move back several times. Chicago was exciting, but also so damn hard for me. Street parking was the absolute worst. So was traffic. And the people! They were everywhere… We shared a backyard the size of a two car garage with ten other tenants! Ugh. And communal laundry. And our neighbor hula hooped in a bikini on her stoop every night. Why did she do this? And why did the other neighbor rollerblade and sing at the top of his lungs? And why did I … care. 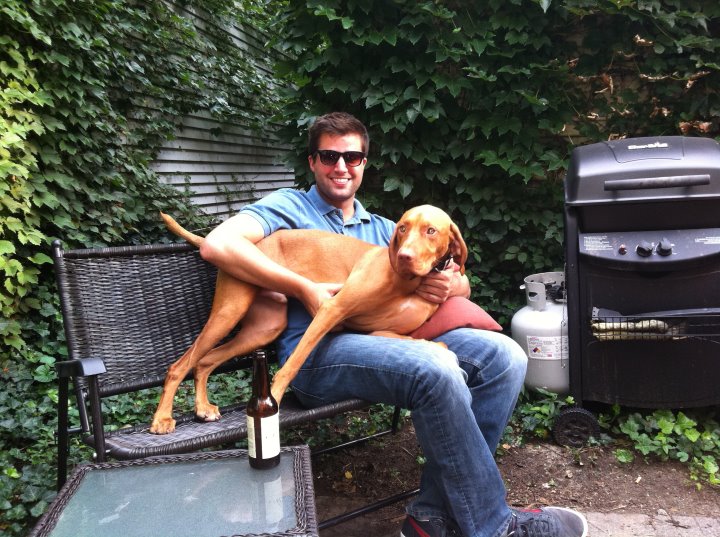 For the first time in my life, I was surrounded by large amounts of people, who were largely different from me. And it bothered me. It would take me years to understand the problem wasn’t them, it was me. One doesn’t just step outside their bubble overnight, at least not when you’re in it as deep as I was.

I came to this city full of fear and assumptions and judged anyone I came across who didn’t meet my approval. Chicago was the first time I came across homelessness and poverty out in public and I had the attitude of “why can’t they just get a job?” And I’d never been served a clap back so fast from a friend I was with that was along the lines of, “perhaps they didn’t grow up with the privilege you did.” (Thankful for these friends who teach us things.)

Perhaps the people I was judging didn’t have a good home life. Or a home at all. Or a family who cared and supported them. Or anyone at all who supported them. The list goes on, or maybe it ends there. The point is we don’t often know the circumstances that lead people to make the choices they do.

Eight years later, I’m still stepping out. I’m still unlearning a lot. Every once in awhile I catch wind of an old thought and have to remind myself I know better.

Now I’m at the point where I’m going to start reiterating ideas you’ve already heard me say, so I’ll wrap this up.  I honestly sat down to write a post about Harold Camping and look where it has led us. I have to think that maybe he wasn’t completely wrong, that a part of the world I knew did end that day in some sorts. I say this because I’m a millennial and it feels right to assume that one man’s crazy prediction was centered around my own self growth journey, after all.

It was all a part of the plan. Thanks, Crazy Pants.