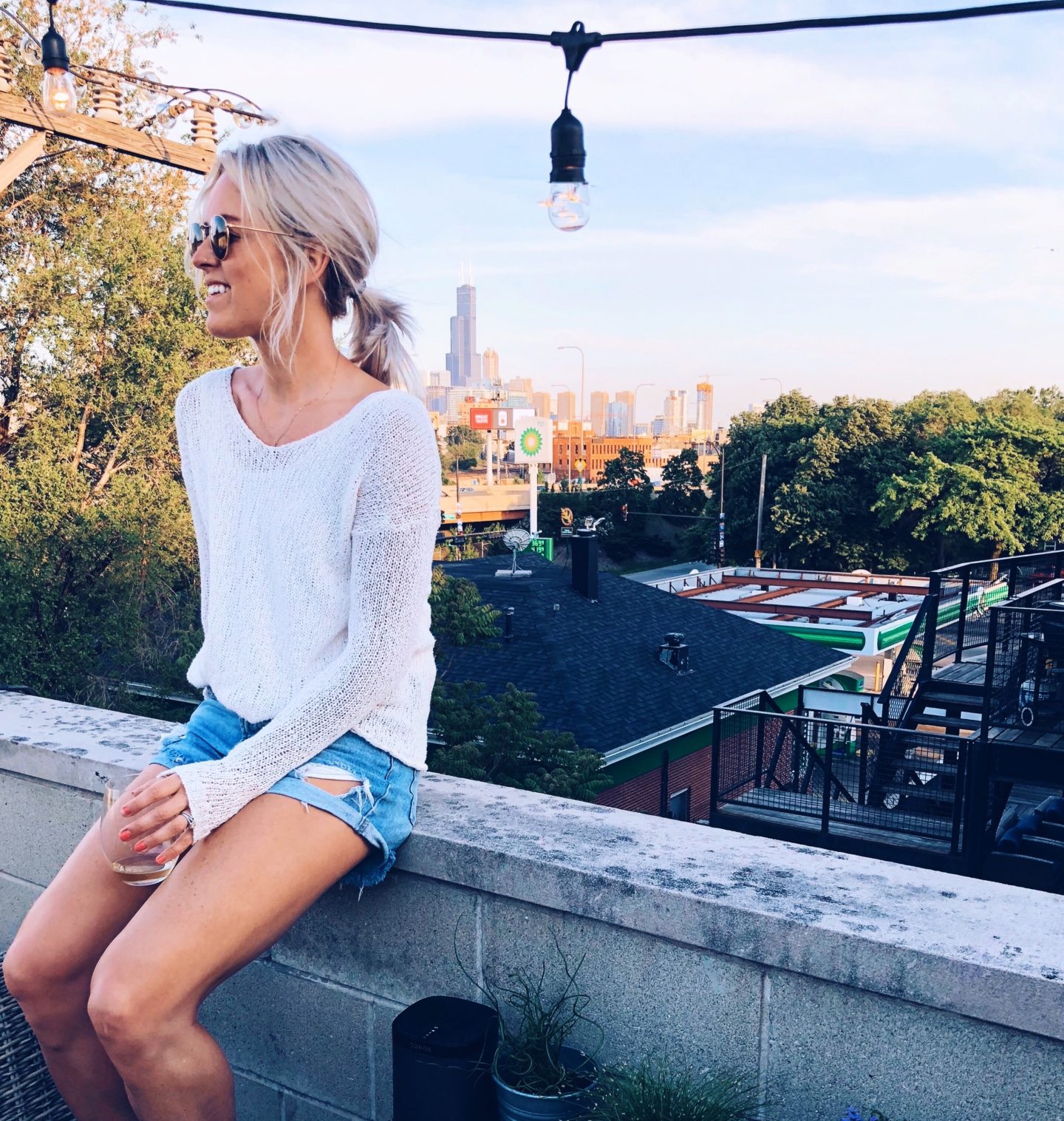 Drink more water! What someone thinks of you is none of your damn business. Stop comparing lives! Live in the moment. Eat more cake.

When looking back, the thing that sticks out to me the most about this past year is learning to accept the idea of divine timing; the belief that everything that happens in your life occurs at precisely the right moment. Notice I said “accept” and not necessarily “enjoy.” Because to be completely honest, for a person like me who is usually always in a hurry, or tends to run a little envious when I see others getting to where I want to be (and seemingly faster) it’s a hard pill to swallow.

For as long as I can remember, I’ve felt behind. Why are they already there and I’m not? How did that person get so ahead of me? How are they on the faster route? What am I doing wrong?

Such a tragic story, right? I can type it and laugh, seeing how annoying and whiny I look, but those are thoughts that have been in my head since I was a kid. They come from a place of lack. From negativity. From ego. (You know as soon as I say “lack” and “ego” you’re in a for a self-help post, right? Okay cool. Just wanted to make sure we’re all clear on that.)

I feel this way most often when I saw others in the same line of work as me excelling faster, or what I view as faster. Whether it be a similar small retail business, blogging, Instagram, whatever.

But then sometime in the last year a voice popped in my head that started whispering, “just hold on, we’ve got something better in store for you.”

Was that voice me? Or Harlow? Or simply a side affect of finally going crazy after the grueling winter that was Chicago 2019?

I still don’t know, but I started to hear it more and more frequently. Just be patient, we’ve got other plans for you. And you’ll like them more, trust us. Who is US? And do they not know patience is a thing I’ve literally never had? Yes, I was definitely going crazy.

But then I decided to do something even crazier. I listened. And I trusted it. And it got louder.

It became obvious to me that so many of those paths I felt behind on, aren’t actually paths I want to be on, anyway. I love blogging as a job. But I love it more as a hobby. I love selling t-shirts because it’s a fun creative outlet and I get to be with Har, but I’d love it more as a side gig. And as weird as “influencing” is, it’s a pretty sweet job and I’d be a fool not to admit that. But none of these things are my end goal. They are simply steps which I’m hoping will lead me to my end goal.

I’ve known this all along, but I forget it from time to time. It’s so easy to get distracted by feelings of, “I see other people wanting this, so I guess I do too.” I also fall for shiny objects and follower counts, as well.

But in this past year (more than ever before) I’ve found my happy place where I feel truly in flow and like I’m doing what I should be doing. And it looks like this. 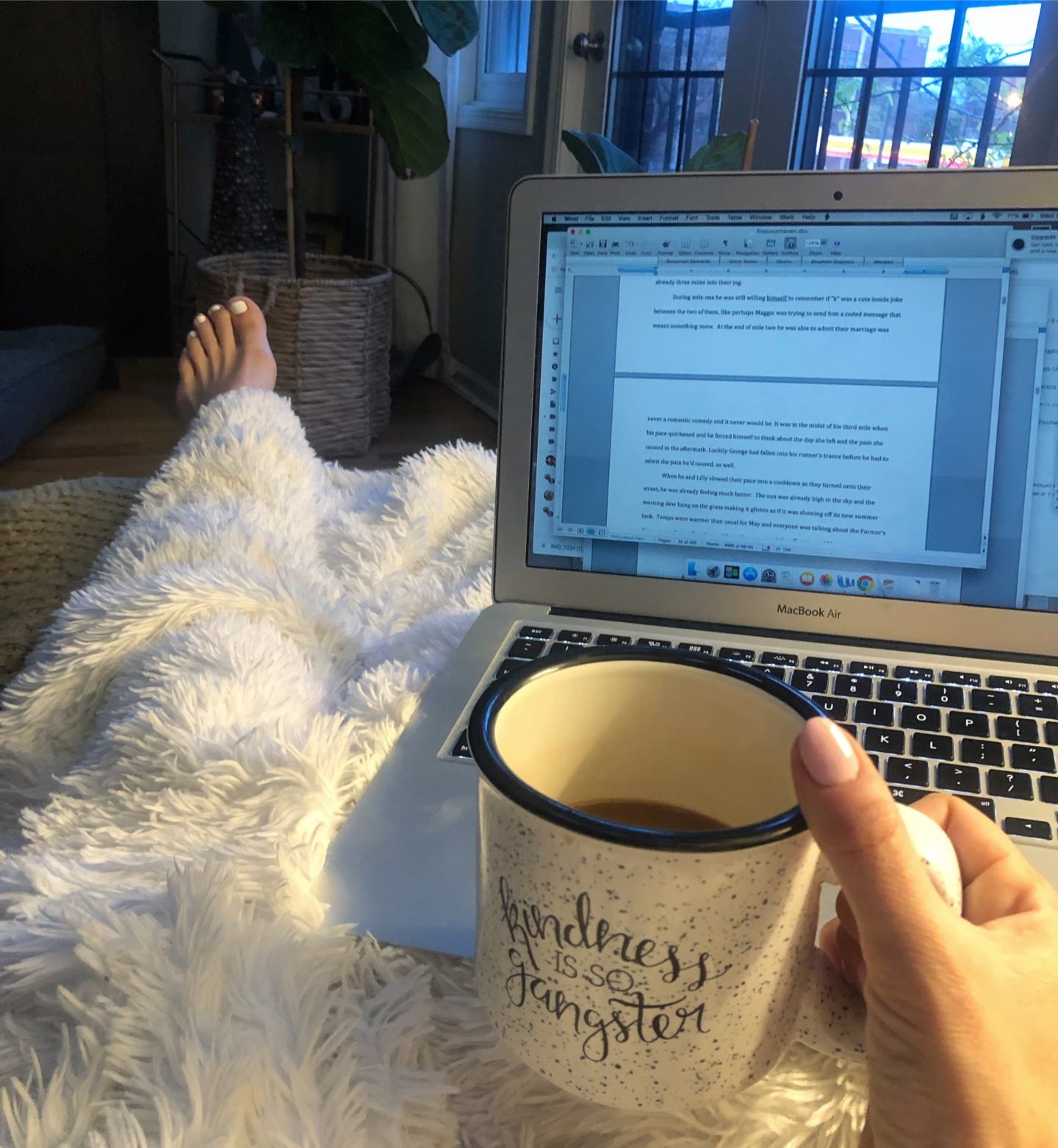 My early mornings with coffee, writing, and Har. (He’s under the blanket.)

Since I was about 21, every single year my birthday became a deadline for a book I would never finish. And each year when May 16th rolled around and I forced myself to archive another piece of writing I didn’t put much effort into, a heavy sense of guilt and regret crept over me. The kind of regret that tightens around your throat and makes you take a deep breath while you wonder what the hell you’re doing with your life. And that’s a suffocating place to live. You can choke it down for a bit and learn how to take smaller breaths to get by, but the feeling will creep its way back up again. It always does.

TOOK LONG ENOUGH! I want to shout at myself when I realize what an ordeal I made out of simply doing the thing that I love. Why did I stall it? Why did I have so much anxiety to just sit down at my computer and write? Why do I have to make everything more difficult than it needs to be?

Trust us, whispers the crazy voice, there’s a reason for it.

Was the reason just to learn about DIVINE TIMING? I have no idea. Or perhaps I’m just being an old millennial and coddling myself… very possible. But when I think about every situation that has led me to where I am, it’s kind of crazy how perfectly they all seem to line up now. So even though I’m not exactly where I want to be, maybe I’m exactly where I should be.

I don’t know what my 32nd year will hold, just like I don’t know what tomorrow will hold. But ideally, I’ll be sending query letters to agents this summer and by next year at this time you’ll be reading my book. Whether it’s just here on this blog or some place else, I’m not sure. Time will tell. It always does.

I usually feel the need to slap a disclaimer on posts like this. And when I say “I” I mean “my insecurities” do. I get nervous to talk about the book I’m writing because I worry people will judge me and think, Holy shit it’s just a book. Get over yourself. Hundreds are written every day. And no one gets their first published anyway so go home. (I like to imagine all sorts of other stuff people might think, however I’ll stop there.) But remember what I said above? What someone chooses to think of me is none of my damn business. 🙂 I knew that 32 Things List I didn’t write would come in handy.

It’s interesting to me how much easier it is to talk about the stuff we’re not good at, or the traits we don’t like about ourselves, rather than the things that truly make us feel happy and alive… I almost just said “the things that set our souls on fire,” and that’s when I realized I should wrap this up. And also cool it on the self help podcasts for awhile.

Last week I came home from the bars and watched the Brene Brown special and cried tears of triumph while shouting, Hell yes Brene! Hell yes! If that’s not 32, I don’t what it is.

Go set your souls on fire, friends. As always, thanks for reading.