As soon as the clock on the microwave hits 10:00 a.m. it’s time to get to work. I grab my notebook full of phone numbers, take the cordless phone to the dining room table and start my daily round of phone calls.

I’ll start with Clarkson flower shop first because it’s Tuesday and I know that’s the day they get more inventory. I call and get the busy signal. This is a good/bad sign. It means I’m not the first one to get through, but it also means they might have the goods.

While I wait, I call the two Hallmark stores in town. One is located in the mall and the other downtown. Both are always picked over and the employees at either store aren’t particularly kind to my daily calls. I have a theory they’re collectors themselves.

“Hi, did you get any beanie babies in today?” I ask.

“Nope, we told you yesterday they won’t come until Thursday, IF they come at all.”

“Okay, thanks.” For nothing, I mumble under my breath after I hang up. I have a feeling they’re holding out on me. 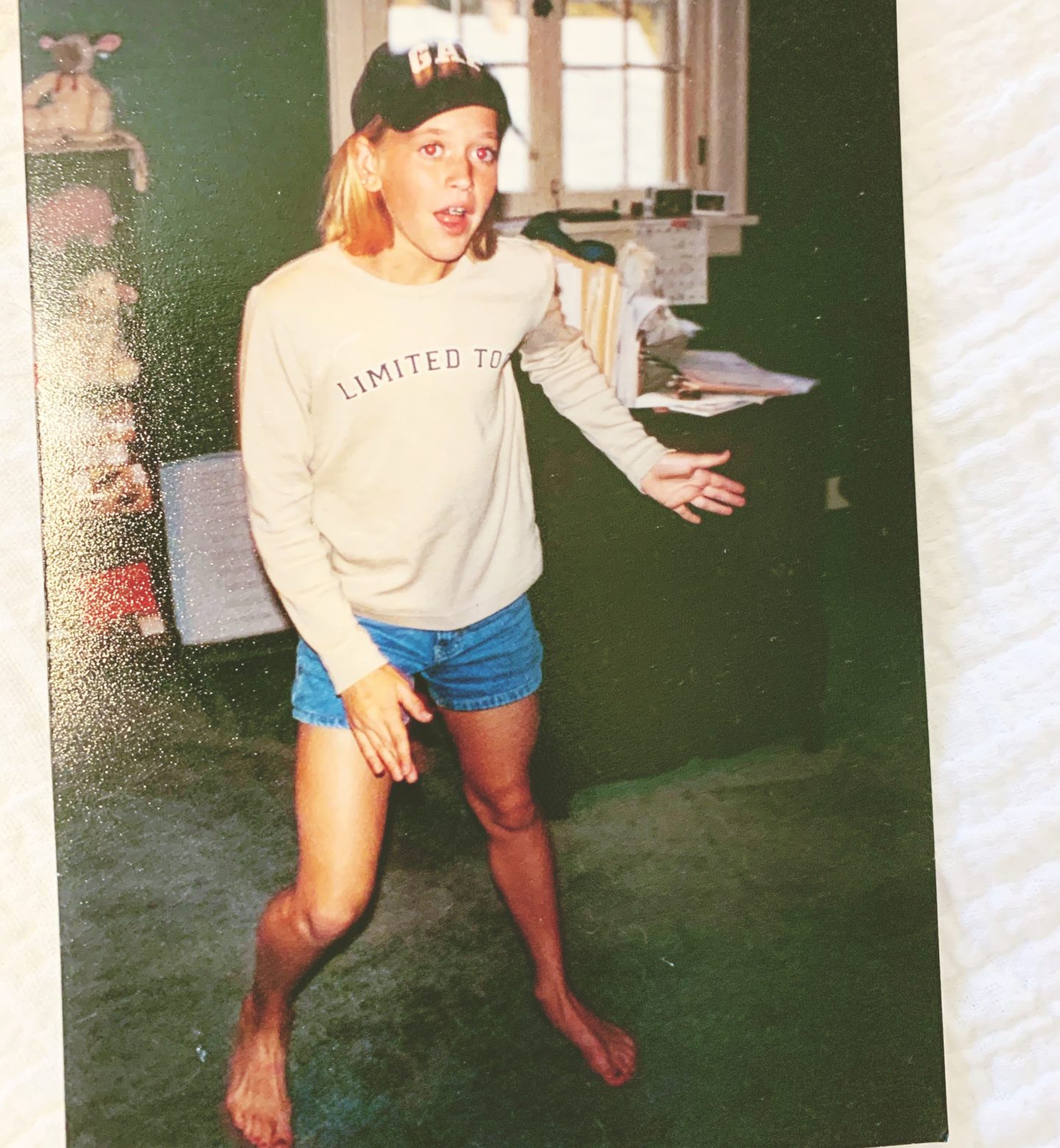 My face after a busy morning of work calls.

I try Clarkson again because time is of the essence right now. Much to my delight, it rings!

“Clarkson flower shop, how can I help?” The old lady says on the other end of the line, sounding just like all of the other old ladies I’m going to call today.

“Hi, did you get any new Beanie Babies in today?” I ask in my nine-year-old authoritative voice.

“Um, let me check. I’m not sure, we got a few boxes, but uh, haven’t really opened them yet, so uh,” she stammers and I can tell she’s distracted.

“Yes, can you check?” C’mon lady, did you get the Beanies or not, I want to shout. I don’t have time to dick around here.

My mom walks in and raises her eyebrows toward me and I shake my head. It’s not looking good. Clarkson is usually our honey pot but other collectors have gotten wind of it lately.

“Yup, we did get an order today it looks like,” the lady is back on the phone and I give my mom a thumbs up.

“Any of the bears?” I ask, holding my breath.

“You know what? I think we did. Looks like we got the purple one–”

Holy crap. Holy crap. “Green. Did you get the green one?” If she has an Erin bear my head will explode. I’m already looking at my mom and twirling my index finger, whispering, “start the car, we gotta go!”

“I can’t really see, there’s a lot here,” she says in a muffled tone and I know she’s digging in a box. By the sound of the muffle I can tell it must be a big box. My eyes get big at the thought of it.

“Never mind, we’ll be in. Can you hold any?” I already know the response, but every once in awhile I’ll get a new employee who doesn’t know the rules.

I hang up before she finishes. Clarkson is a 60 minute drive, 65 if there’s traffic. By traffic I mean tractors taking up two lanes. Who knows who might already be on their way there? Creepy man with the weird glasses and two greasy hairs is always one step ahead of my mom and I. And we can’t forget about the lady who has that palish look about her like she never escaped home schooling. And then there’s the adult twins that dress alike un-ironically. The thought of this group sends a chill down my spine. We have to get going.

My mom and I jump into her white mini van and we’re both excited. This could be big. I grab my notebook just in case we pass any other small towns we feel like hitting up on the way back. I wish there was a way I could call my stores while we’re driving, but sadly my mom won’t get her “car phone in a black leather box” for two more years.

“Can you imagine if they have the Erin Bear?” I daydream.

“That’s the Irish one, right?” My mom asks, but she knows.

“Yes, it’s harder to find than Princess Di or even… maybe even Glory Bear.”

I nod and go over my dream team of beanies in my head.

Princess Diana Bear (I own three.)

Glory Bear (I have one. I need more)

Peace Bear (again, only one. I don’t love Peace which I’m ashamed to admit, the tie dye is just a little loud for me.)

Hippity, Hoppity, and Floppity. (Must have the set or they’re worthless. I have the set. Two of them.)

Valentino Bear. (two, but I have a feeling this one is being mass produced.)

And then we’ve got the first generationers-

Patti, Jake, Bubbles, and Snort. I own Snort, but he’s in poor condition.

And Spot, Squealer, and Legs. I own several of these, but none from the first generation so it’s a moot point.

The one I’m missing, which I know I should have, is Erin Bear. Why don’t I have Erin? I am obsessed with finding Erin. Today is my day.

On the drive to Clarkson we pass fields of corn waving out to us, their smaller cousins, soy beans do the same a few miles down. And beyond that there’s cows huddled together near water holes, trying to stay cool on this hot Nebraska summer morning. But all I see are Beanie Babies. I don’t have Daisy the cow yet, but I want her. I want all of the Beanie Babies, but I’m not sure why. I just know that I do.

The obsession began a few months earlier when I visited my older cousin in Colorado. Whitney had shelves full of beautiful Beanie Babies that sat perched near her bed, all with protective shiny cases covering their pretty red and white TY tag. Whitney lived in a big city (Denver!) so everything she did, I wanted to do. If she thought Beanie Babies were cool, they must be cool.

It started as all hobbies do. Slow and careful, like I was just testing the waters. Then ever so surely, once I found out I liked the way the water felt, I allowed it to pull me right in.

My mom turns onto the cobbled street where the flower shop is located in the heart of the small town. The population is less than 700, so perhaps it’s even classified as a “village.” Nebraska has a lot of villages.

We stroll inside and I go straight to the beanie section. My eyes scan the shelves quickly, looking for any I don’t own, or any I want to own more of. My collection is up to around 100, but I have a mental catalog in my head and know exactly where I stand.

“Do you have any bears?” I ask the woman behind the desk.

“We did, but we just sold the last two about a minute ago.”

I look at my mom and shake my head. We came so close! I feel so very defeated.

But my mom saw something I didn’t see. In her hand she holds two bears. A purple Princess Di bear and a green Erin bear. She’s got the power duo in HER HANDS. I can’t believe my eyes. I think it’s a trick or that someone is going to take them from us.

“They were piled under the others. I just saw the green foot sticking out and there they both were.”

“Would you look at that? We do have two bears left.” The lady says as if they’re just two regular bears! Like two regular stuffed animals she might use to tie a bouquet of balloons to and I’m almost insulted at her ignorance.

She rings them up for a total of around $14 for both. Clarkson is one of the cheaper stores selling Beanie Babies for regular asking price of about $6.50 each. In Norfolk, they retail for around $8. And in about four months from this time, I’ll sell my bears for around $250 each and the “regulars” for around $37-$65/ each.

We drive away with my precious goods tucked safely into a brown paper bag and I can’t stop smiling.

My mom and I chat about what a good run this is and also what I’ll have to do once we get home to pay for them. My mom supported my hobby, but it wasn’t a free ride. I exchange Beanie runs for chores and various tasks around the house.

You’re probably wondering why mom drove me around to towns 60 miles away to do this. It certainly wasn’t her idea to do it, I simply begged for rides and she indulged me. But looking back, it was a really fun side hustle that we did together. (I’ll have to call her later and see how fun it was for her…)  I know that I get my entrepreneurial spirit from her. She is always a supporter of taking risks and chasing new ideas, no matter how wacky they seem.

I was nine years old when I sold my collection.

No one forced me to sell. But I saw the writing on the wall and wanted to get out while I could. So one fall day I packed up my entire collection and flew to Denver on a tiny plane from the Norfolk, Nebraska airport. It was my first time flying alone and also my first business trip. I ordered an apple juice on the rocks and sucked on a candy cigarette (it was the 90s and this was still allowed) as the plane soared higher into the sky and questioned for only a second if I was doing the right thing. But then I felt the wad of one dollar bills in my pocket and knew that answer was yes.

As the plane landed, I tossed the flight attendant a few extra dollars and told her to buy herself a nice dinner on me. She was sweet and I knew I was about to make bank.

Once in Denver, a fresh new Limited Too power suit on, my cousin and I set up two folding tables directly outside of a street fair that wouldn’t let us get a stand actually in the fair because “we were just kids.” We laid out our Beanie Babies, then waited for the people to come to us.

And they did. They came in hoards. All adult collectors, I might add. I don’t recall seeing a single child. We had lines of people waiting to pay top dollar for our Beanies.

I remember the fair organizers were livid. They even told us to leave but we held our ground. I was a bold little kid, but my cousin was even bolder. The fair people didn’t let us in, so we did what we had to do. Besides, there was another booth of kids just like us across the street selling their own goods, as well. It wasn’t our fault they chose to sell lemonade for 50 cents a cup whereas we chose to sell something that would make a bit more of a profit…

In the end, I sold every last Beanie Baby I took to Denver. I made a nice little chunk of cash for a nine year old, most of which I had saved right up until high school. (Saved in a fossil watch tin, I might add.) The other half went to my mom to pay off old debts.

But buried deep in my closet, two bears remain. Princess and Erin. I couldn’t let them go. They might be worth something someday…