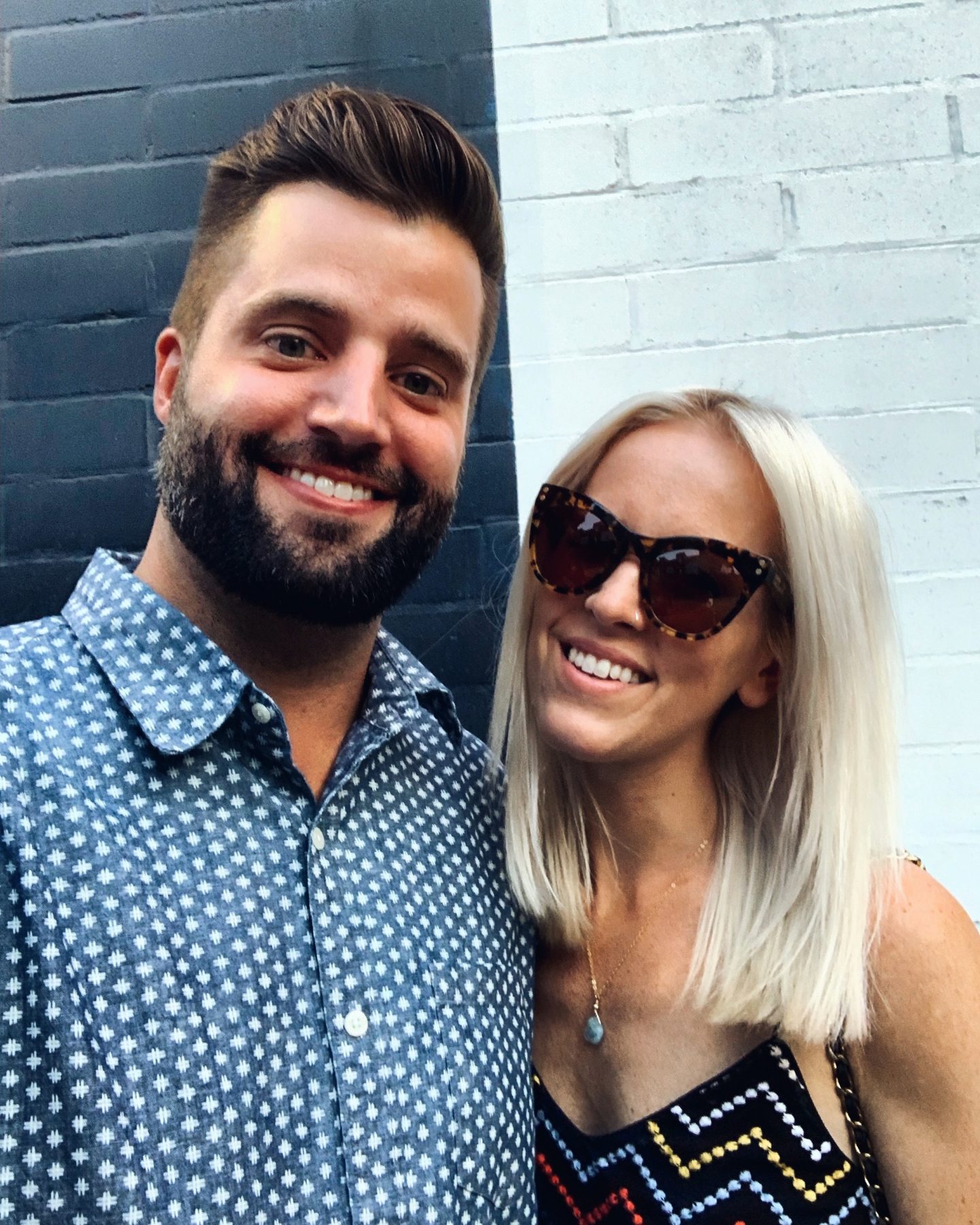 Our original plan was to celebrate our anniversary at our favorite Italian restaurant. For the past 5-6 weeks I’d had the weirdest food aversions so when I found something I liked, I went all in. For me that was pasta.

I hadn’t left the house past dusk in ages so I told Chris it was going to be my “big night out.”

In reality I think I ate saltines that night and that was it. Maybe I had some grapes, too. I don’t really remember because that entire day is a blur. After the surgery I could barely keep my eyes open long enough to be wheeled out to our car. The nurses were reluctant to let me go, but I convinced them I was awake just so I could get home. I wanted to be in my own bed. I wanted my Har next to me. And I was right, he was just what I needed. I slept the entire day away but anytime I’d wake up Harlow was always there, head next to mine. He wasn’t even sleeping, he was just there.

So Chris and I decided to reschedule our anniversary date for Friday. We’d be in better spirits by then.

But then Friday rolled around and when Chris came home from work I was on the couch in pjs.

Little backstory here- so we all know by now that “morning sickness” is a bullshit phrase because it actually strikes whenever the hell it damn well pleases. My worst hours were usually in the afternoon, or from 5-9 p.m. Actually, 5-9 was always a bad window for me, at least from about 6-11 weeks. I just didn’t leave the house. I laid on the couch, wrapped in blankets, and waited for bedtime.

“We can do whatever you want,” Chris said that Friday evening and I knew he meant it. I won’t annoy you with the mushy details regarding how great he’s been during such a shitty time, but I couldn’t have asked for someone to better to walk through this with, and I’ll just leave it at that.

So there we were, a couple of sad sacks on a Friday night who hadn’t left the house in weeks, debating if we should make an effort and go to dinner and celebrate an anniversary we were both pretty blue about, or just say screw it and stay in.

Chris opened a beer and I poured the first glass of wine I’d had since May. It’s weird how in the beginning I missed drinking so much and then when I had the chance to do it again it didn’t matter. I couldn’t have cared less.

So we both put on a good face and pretended to be excited about the night ahead.

We decided on our favorite sushi spot in the West Loop. Why not? I could eat it now. As we walked down Randolph, the street was crowded with bachelorette parties, drunk twenty somethings waiting in lines for bars, and tourists trying to take photos in front of their hotels. Summer had been going on in Chicago the entire time I was stuck on the couch. Who knew?

The first roll we ate was good. The second, even better.  Maybe we could enjoy ourselves a little, after all.

Between each dish we talked about things that made us sad, stuff that caught us off guard. Like the pregnancy apps I downloaded and insisted Chris do, as well. Those were the obvious ones. But then there were other things, small triggers like walking by the spot where I first told him I was pregnant. Or the books still arriving in the mail that we were ready to dive into for second trimester. A glance into the disorganized guest room with the lone onesie lying on the bed.

This sounds a bit depressing, I realize that, but talking about it and getting it all out there wasn’t. (Okay, it was a little.) But it also felt really cathartic.

On our way out, we passed a young couple holding their sweet new baby. Chris and I gave each other the look. It was a look that only a week ago meant something entirely different. Since learning I was pregnant, we seemed to see new parents and pregnant women everywhere. The look was our secret acknowledgement that we’d soon join them. Until it wasn’t.

We passed them in silence and both put our heads down, then Chris leaned in and whispered, “Want me to punch that baby for you?”

I can’t even type it now without chuckling. I get that it’s immature and inappropriate, and 100 other things you should never say, but in that moment it was exactly what I needed to hear.

We had another drink on a patio before finally heading to a cozy little Parisian restaurant. We were seated in a dark corner booth in the very back and ordered our favorite bottle of wine. For the next two hours we talked about everything under the moon and then some. By the end I told Chris that somehow the most depressing anniversary to date also seemed to be one of the best.

“How is that even possible?” I asked. But I knew.

It’s because joy and grief can coexist. I’ve been reminded of it time and time again this week. We’ve had blue moments, followed by happy moments. We’ll share a sad story, then a me-on-anesthesia story… (A full post on that is coming, by the way.) I just have to wait for my embarrassment to subside.

The appointment last Monday feels like a year ago and also a day ago. I know the small triggers will continue to find us when we least expect it, but I also know you can’t move on from something by hiding from them. You have to walk face first into them and eventually they’ll stop being so scary.

And I can assure you we don’t actually want to punch any babies. I’m sure that baby we passed last Friday is a very fine person. I won’t deny it’s a little hard to see the social media posts from pregnant women I was secretly tracking, knowing they were about as far along as I was, but I also know feeling bitter or resentment toward them makes no sense, either. I have no idea what they’ve gone through to be pregnant, or what the new parents we pass on a street have done to get their baby. Maybe nothing at all, maybe they got lucky. Or maybe they’ve been to hell and back but a stranger looking in would never know. The only story we ever really know is our own.

July hasn’t been our best chapter, but I have a really good feeling about the one we’re going to write in August.