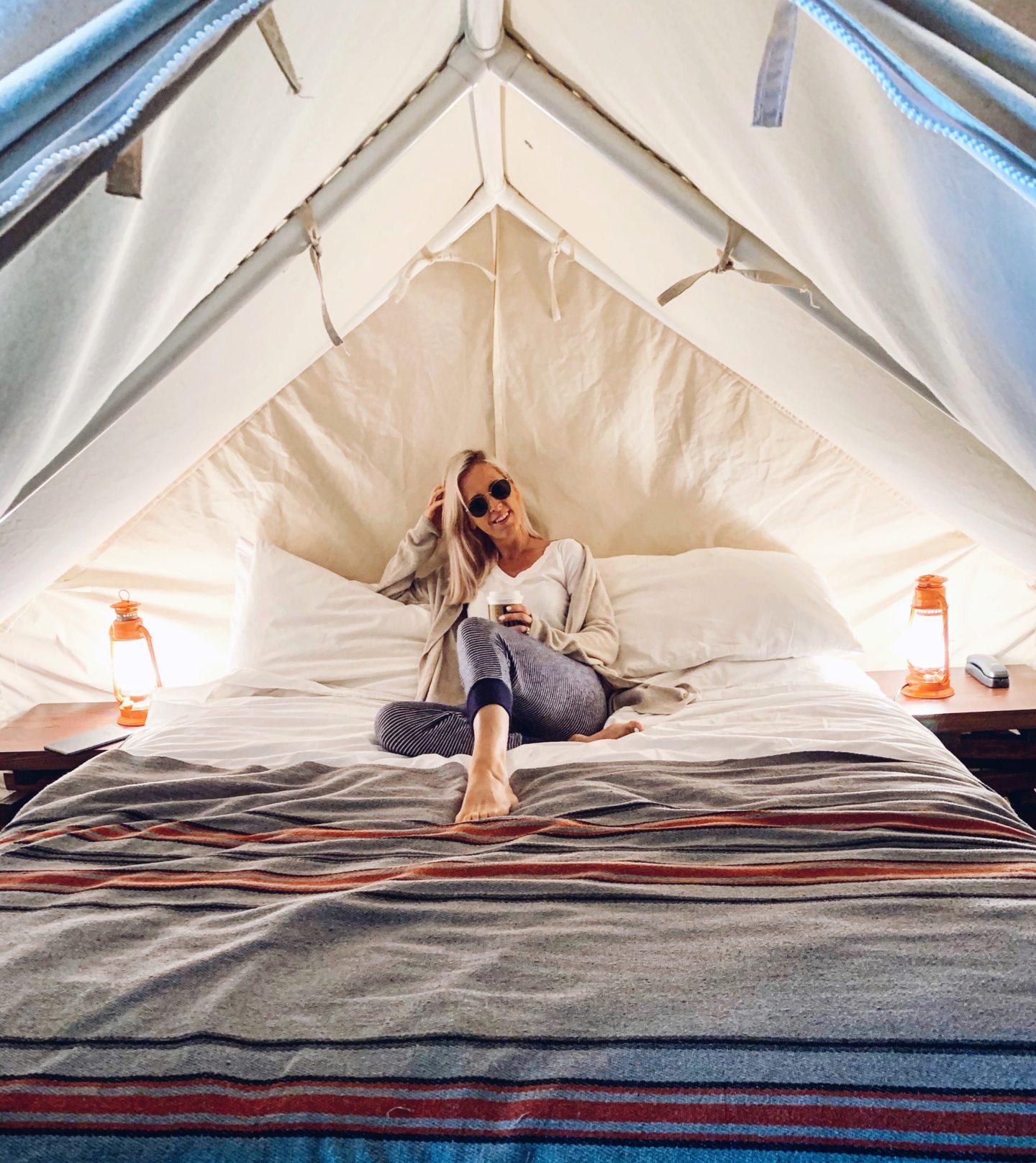 The room with the tent inside seemed like a good idea when I booked it. A perfect idea even, when I really thought about it. Chris and I kept talking about a camping trip but hadn’t found the time, (or perhaps the desire- but neither of us would admit that), so here was our opportunity!

A hotel room (or motel room whatever) with a tent inside. How fun! How cheeky. I could just imagine the excitement on Chris’s face when we arrived.

It’s like we’re camping, because we kept talking about a camping trip! He’d say.

Exactly! I knew you’d love it!

What’s not to love about a bed inside a tent? This is great!

I’m such a good wife, I’d think to myself that first night on our fake camping trip as we fell asleep under the stick-on stars that grazed the speckled ceiling. Such a good wife.

We arrived in Reno around 10:30 p.m., (12:30 a.m. Chicago time in case you’re not familiar with how time zones work.) We were a little tired, a little grumpy, and still had more than an hour drive in front of us. I’d forgotten to take all of this into account when playing out my daydream of revealing the tent room to Chris. Perhaps we weren’t going to be in the jolly spirits I was hoping for.

The person who had the rental car before us seemed to fill the tires to max capacity so the ride was extra loud and bumpy.

“We should have gotten the truck,” Chris said about five miles too late.

“This isn’t that bad,” I responded because I chose not-the-truck, and the SUV we got instead was that bad but there was no way I could admit that now. I must pretend SUV was the best vehicle from now until the end of time.

For the next thirty minutes or so we spent the majority of our time acting as if we’d never been in a car that was not our own before. Where was the air? How do we plug in our phones? Did this car have sound? What about lights? Is this how a steering wheel works? When we grew tired of pressing buttons we moved onto our sore throats, headaches, and congestion- all things felt because of the altitude. Or was it the stale airplane air? We weren’t sure, but we were willing to discuss it for 50+ miles, anyway.

As the roads got tighter and curvier, wrapping around the mountain like a piece of wet spaghetti thrown on the wall from a woman hoping to marry someone who’s name started with an “S,” I was even more anxious to arrive in our tent room. I don’t enjoy mountain driving, but had offered to take the wheel since this was technically, “Chris’s birthday trip” and I’m a very kind wife. Of course I assumed he’d say no since he’s the one who always drives on vacay (it’s a hobby of his) but much to my disappointment, he didn’t object this time.

So there I was, tooting Chris around like I was his chauffeur or something when he had the audacity to tell me that I was, “really riding the car in front.”

“No, I’m not,” I replied without hesitation. “This is a normal space between two cars.” Never mind that I have no idea what a “normal space” is anymore because Chicago driving is a beast of its own, a beast I appreciate and thrive while in the midst of, I might add.

“Do you want to drive?” I mumbled, knowing I shouldn’t say it. I begged myself not to, but those words were always on the tip of my tongue, ready to passive aggressively roll out of my mouth at any second like the chubby little trolls that they were.

Tell me something I haven’t heard, I scoffed in my head until realizing that comeback wouldn’t do me any favors. Just wait until he sees that tent room, then he’ll be sorry for telling me how to drive.

Twenty minutes later we pulled into South Lake Tahoe and found our roadside motel. If you’ve ever been to Tahoe, you know the area is full of retro motels that are totally midcentury and awesome. Well ours was right across the street from a huge casino called Harvey’s. I don’t recall seeing the casino in the reviews, but I’m sure it was there. It was hard to miss.

We climbed the three flights of stairs to our room, unlocked the door at the end, and there it was. A tent inside of a room.

“So what do you think?” I asked in the way someone does when they don’t actually care what you think, but you better damn well know what they think/want to hear.

“Because we kept saying we wanted to go camping,” I finished for him, knowing that’s what he must be thinking. “So now we are. We’re camping!”

Chris looked for a place to set his bag, “So are all the rooms like this?” He settled on the picnic table next to the light up campfire.

“Cool.” The room was warm, the tent even warmer. Chris tried to turn the air conditioning on, which was located on the wallpapered wall that looked like a forest, but it didn’t work. “So you chose this?”

Perhaps fake camping wasn’t as fun as I thought it might be I realized as we tried to sleep in the bed, inside of a tent, inside of a stuffy room. We opened the sliding door to the balcony to let in some cool mountain air, but the lock was broken and it made me nervous sleeping with an unlocked door all night.

“You know actual tent doors don’t lock either, right?” He pushed the last of the blankets toward my side.

“Well we’re not in an actual tent, Chris!” I pushed them back.

“We’re in a tent, in a motel room, and we’re going to enjoy it whether we like it or not!” I looked up toward the ceiling but couldn’t even see the stick-on-stars through the liner of the fake tent.

We woke up the next day hot and sweaty and with a few new mysterious bug bites on our legs, I can only assume from fake bugs. As we drove to find our first morning hike, our car even louder than it was yesterday, I said to Chris, “I think we probably should have gotten the truck.”