Chris and I do this fun thing when we go on vacation where we plan literally nothing, then once we get to the destination, we bicker with each other about planning literally nothing. We’ve been doing this for over ten years now, so you’d think we might catch on by now, but nope! It’s all a part of the fun of being “non-planners.”

The one thing we can plan on however, is constantly asking each other, “so what do you want to do today?”

What I really mean: “As long as I get brunch first and whatever you choose doesn’t involve me getting cold, hungry or thirsty, I don’t care that much.”

Chris: “I’m kinda game for whatever.”

What he really means: “I want to go explore and feel like I’m Johnny Outdoorsy, so let’s go hike 100 miles right now and get off the beaten path and see where the land takes us and if that takes us somewhere where we get lost I 100% won’t ask for directions at any given time so let’s go!”

So we take a lot of car rides on vacation. Chris gets to explore and I get to control the air conditioning.

On day two of our Tahoe trip, after being in the car for about five hours because 1. we got lost and 2. Tahoe traffic is awful, we were both itching to get out. We passed a river and saw people rafting down it, so I said, “hey, let’s do that.” And less than ten minutes later we became the rafters.

Once we paid for everything, got our life jackets and were directed to “not get in the water without them,” we stepped on board and things started off oh so lovely. So so lovely! The clouds were breaking up, the sun was coming out to say hello, and the birds were chirping. What a fun spur of the moment decision we had made! 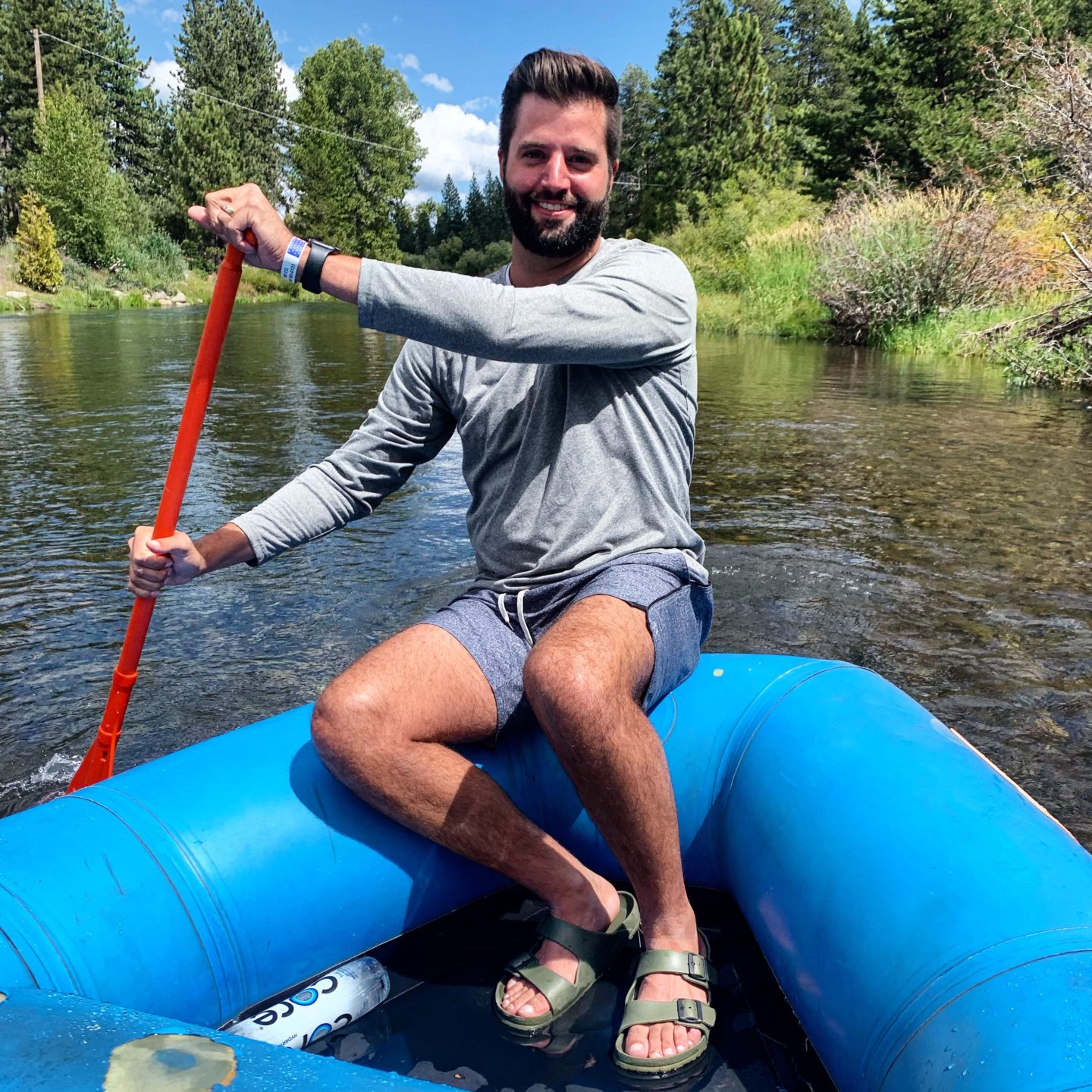 You may or may not notice there’s water at Chris’s feet. This detail will become important later.

It was about ten minutes into this little “rafting excursion” when I realized we should have better communicated our expectations for the next two hours. As if on cue, the clouds moved back in and things turned dark. The sun, sensing turmoil on the river I assume, disappeared completely and the temps dropped at least twenty degrees.

See, I thought we were there to leisurely float down the river. Would we run into a few rocks? Probably. Get stuck in some trees? Maybe. Bump into another boat or two? Yes. But who cares? Bumper Boats at the Norfolk, Nebraska “Fun Center” was my favorite ride as a kid, which looking back now seems like an oddly dangerous “ride” for young children to participate in. What could wrong with letting a bunch of five-year-olds drive motorized boats in a deep pool of murky water where the sole purpose was to slam into one another as hard as they can? What I ask you?

As I was saying, Chris cared. I can’t be certain, but I think he thought this was his trial run for the Summer Olympics Rafting Team. Chris is a, “do things right or what’s the point,” kinda guy. Where I’m a, “do things however it’s easiest and it’ll be fine,” kinda gal. Sometimes this combo works great, we balance each other out. But other times, like for example when we’re moving furniture, or cleaning the car, or trying to paddle down a river in a raft, things get a little… rocky.

The more he griped at me to, “Paddle forward! Not back! Forward! No left. Go right. Zig zag!” The more I seethed with, “don’t you tell me what to do,” anger.

Although the happy image above doesn’t show it, the river was packed with rafters. So we couldn’t use our normal at-home-angry voices. We had to use our we’re-out-in-public angry voices. These are quieter, higher pitched tones, where the anger is all delivered from the eyes.

Rafts full of drunk women would bump into us and I’d smile and give Chris a look that said, “See?! They’re having fun running into stuff. It’s fine!” Then he’d respond with a look that said, “We are not them, I’m just asking you to paddle forward and listen for once!” We had a full hour of conversation with only our infuriated eyes and snarky head shakes.

Eventually, I noticed Chris’s phone sitting in a pool of water near my feet.

What a sucker, I thought as I swiftly saved it from disaster like the hero I am.

“Your phone was in water, but I got it. You better put it in your pocket or something,” I said as I handed it back to him and waited for my gold thank-you balloons.

“Did you kick it off the life jacket? Because I specifically set it there so it wouldn’t get wet.”

This is where the real fun begins. Chris became pissy because I ALLEGEDLY kicked his phone off of a life jacket- a life jacket that was on the FLOOR. Of a RAFT, I might add. It quickly became one of those arguments that had no end and if we didn’t call a truce soon, it would escalate. It would escalate into Chris saying things like, “you don’t take direction well!” And me saying things like, “why are you so uptight?” Then we might bring up a fight from 2013 with examples where both of these accusations we just hurled at each other were proved to be completely true!

Maybe instead what would happen is right in the midst of our childish argument about a wet phone (that was still very much working) we’d glide right into a large rock. And somewhere in between the name calling and finger pointing, Chris would lose his balance and start to fall back. I’d watch it happen in slow motion, or maybe it was real-time motion, we were moving so slow it was hard to tell, and I reached to grab him before he tumbled backward, but I’d be lying if I didn’t admit I hesitated.

For one teeny tiny half a second I thought, look who’s not taking not taking direction now… By the time I reached for him it was too late. He had fallen backward into the treacherous two feet deep water. Big man fall hard.

It was one of those moments where in lighter times we would have laughed. We would have laughed hard. It was downright hilarious watching Chris tumble backward, completely submerge himself somehow in the shallow river, and then come back to the surface looking totally shell shocked, as if he was a large bearded baby who’s mother had just dunked him to introduce water for the first time.

But see, we weren’t in lighter times. And we all know the rules about funny moments that occur during arguments, the first one to laugh loses. It must be a mutual agreement between both parties that said argument is over and a new happy moment has begun before one is allowed the acknowledge the hilarity of the situation.  So I stifled my giggles and offered him my Patagonia. It was cold and about to get colder. 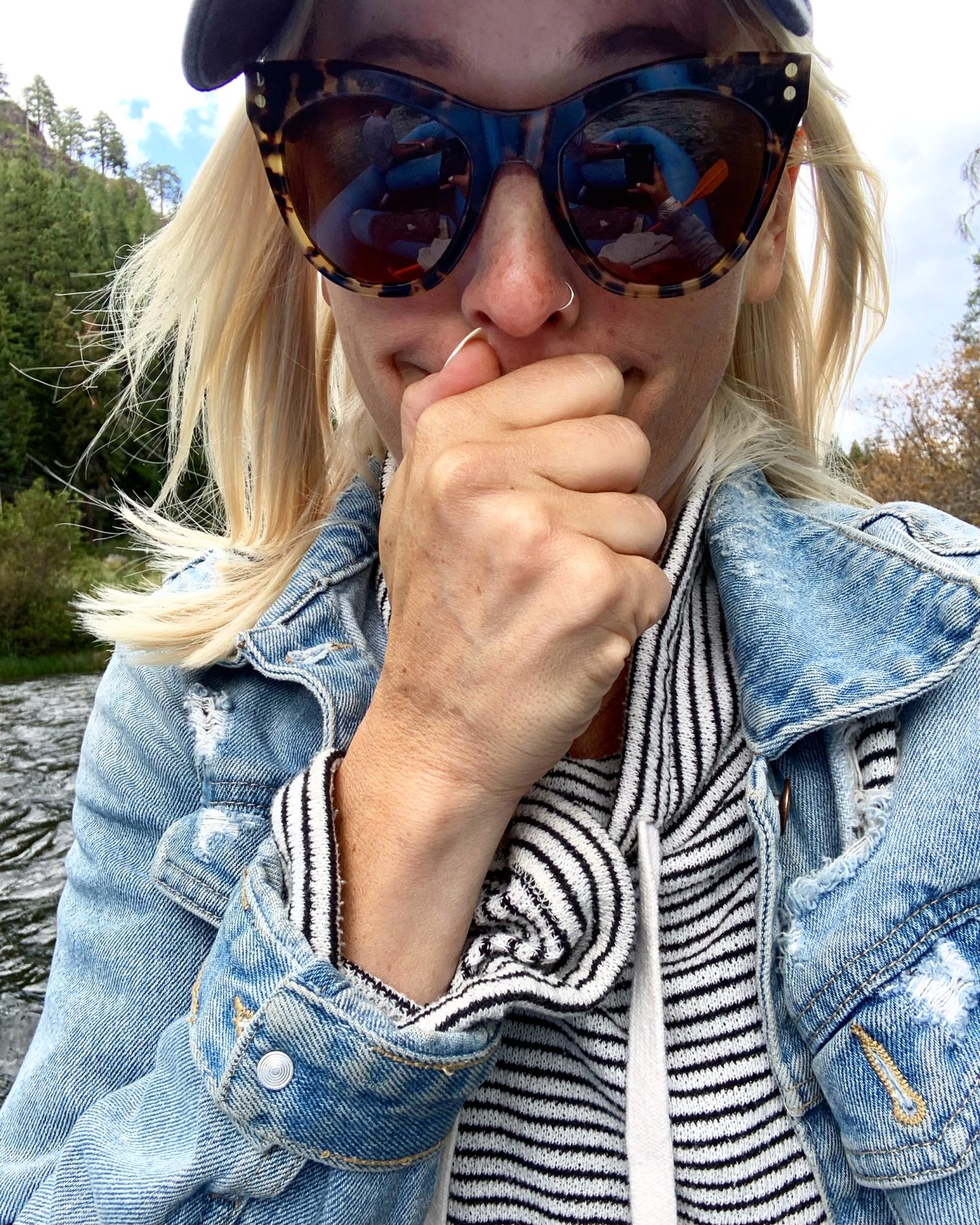 He declined my offer. And then I remembered his phone. It was in his pocket. Sonofabitch.

“Hey uh, is your phone okay?” I asked meekly.

“My phone?” He felt for his soaking pocket and it wasn’t there. Then he looked at the life jacket near his feet. “My phone is fine because it’s on this life jacket. Where I left it.”

We rafted the remainder of the trip in silence. Cold, soaking wet, silence. 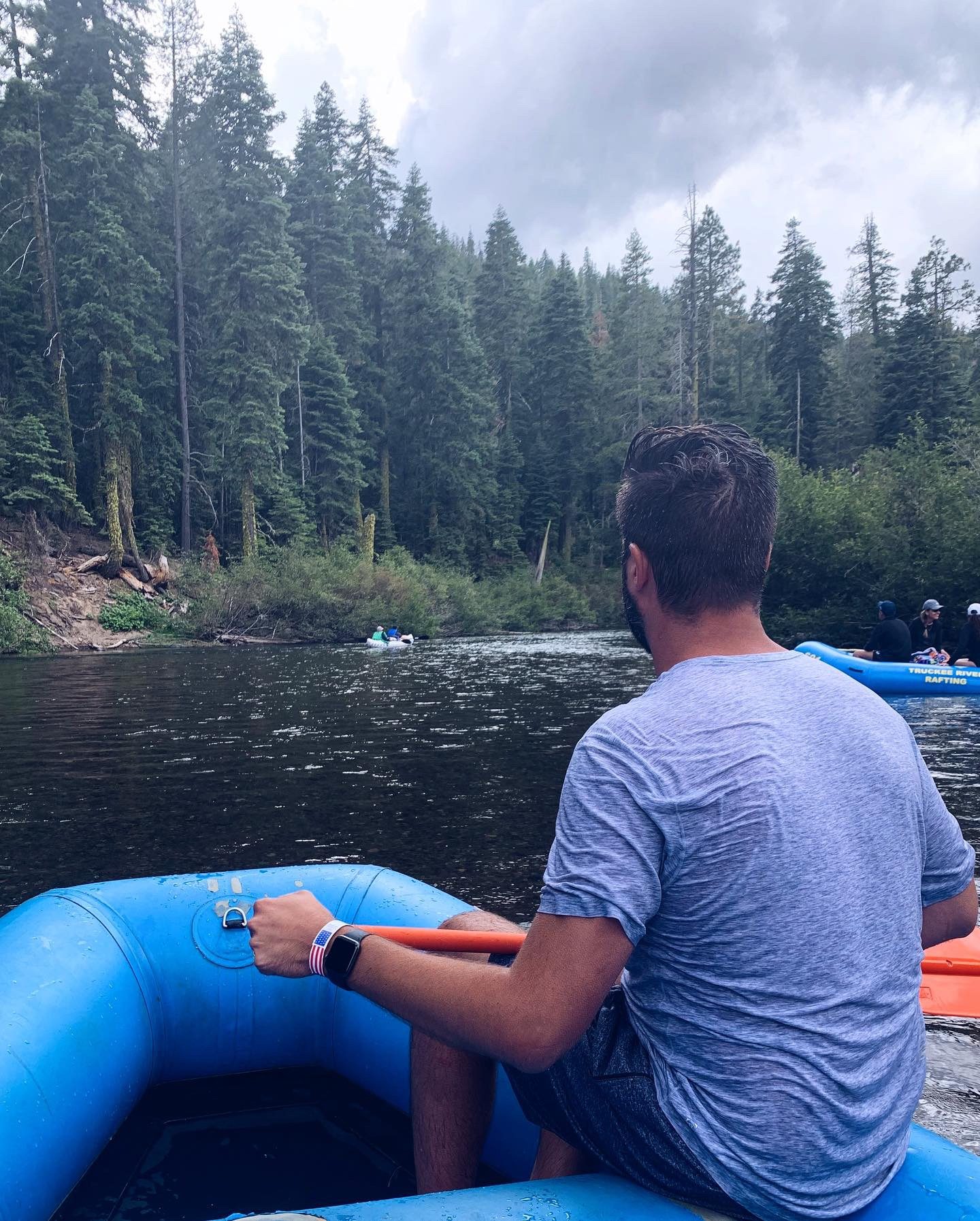 As we rounded the curve toward the end, a rafting guide was standing near the edge to remind us that we were about to hit the biggest rapids of the trip and we should be prepared. No sir, I thought, we hit those about thirty minutes ago.

When Chris told me to paddle a certain way, I listened. I took direction! And when I warned Chris of rocks sneaking up behind him, he held on. By the time we finished and were enjoying a drink over looking the river, I said, “So can we laugh about all of this yet? Because you falling in was pretty damn funny.”

Chris shook his damp shirt, which was almost dry by now, “Yeah, we can laugh.” A truce had been called! 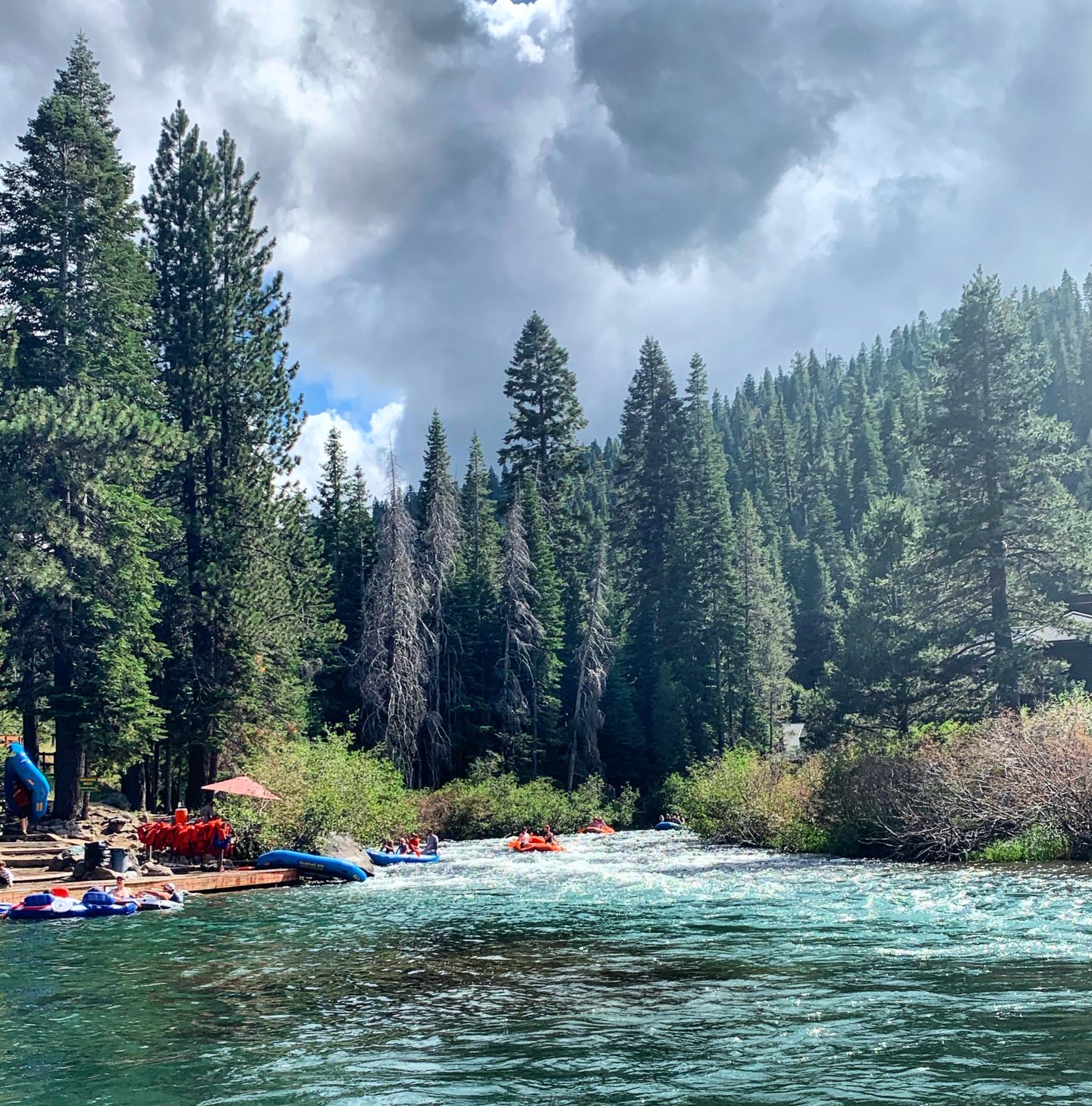 As we walked toward the bus that was going to take us back to our car, both in much better spirits, Chris leaned in and asked, “So what do you want to do after this?”

I shrugged, “I really don’t care, what do you want to do?”