A few Sundays ago I decided it was time, it was time to make my first batch of chili for the season. So I went to the grocery store around noon to pick up the necessary ingredients. Have you been to the grocery store on a Sunday around noon before? It’s like Satan’s playground full of unhappy families all arguing over whether they should buy another frozen pizza or not. Obviously I’m not talking about my beloved Trader Joe’s.  I had to go to a good old fashioned grocery store because I needed a parking lot because I couldn’t ride my bike on account of all the cans of beans and tomatoes I was having to buy. 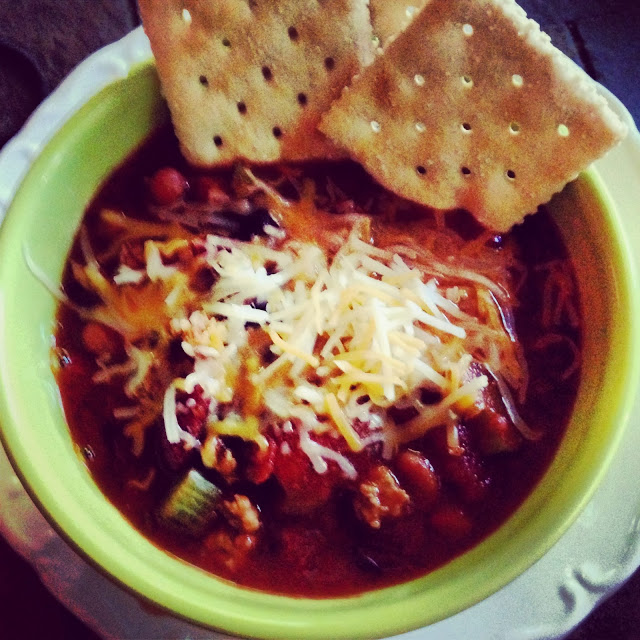 I made it out of the store after barely finding everything I needed- this had something to do with the fact the other customers all seemed to be purchasing food as if the apocalypse was about to happen. I couldn’t find the right sized ground turkey I needed, so I just bought the smaller one and figured it would be okay. I just had to get the hell out of this store. After returning home, parking three blocks away, and then attempting to make it inside with all eight of my bags before one of my arms broke off, I made it to my front door. Having a case of GSA (Grocery Store Arm) in the city is the absolute worst. Chris helped me unload the bags and the first thing he said was, “Do you think this will be enough meat?”

And I damn near lost it. He might as well have said, “I think we should sell our first child for meat.” Because I just freaked out and screamed back, “Why in God’s name would you even say such a thing?” Followed by a few more unnecessary, very dramatic lines.

Things That Boys Do That Make Girls Crazy. (Or at least me, anyway.)

1. When we’re texting and then I call you and you don’t answer.
I clearly know you have your phone. So just pick it up already so I can find out something that is probably pretty pointless, like if you want goulash or quinoa surprise for dinner.

2. When you sit in my car and refuse to wear your seatbelt.
I wish I could say this is because of safety, but it actually has more to do with that damn beeper that will go off for 68 minutes until you do decide to buckle up. The seatbelt beeper saves lives, but it ruins relationships.

3. Messy cooker.
I know I should just be happy Chris is a wonderful chef and really loves to cook, but the fact of the matter is that when he’s done cooking it looks like a tornado just ran through the kitchen leaving behind debris of grease and italian seasoning everywhere. Then again, I’m kinda an OCD cook and I prefer to clean as I’m cooking. Chris likes to blindfold himself and toss things behind his back into the skillet and hope for the best.

4. When you casually mention you’re going out with friends and say I can “come along if I want.”
Well do you want me to tag along or not? This one kills me. Especially when he then responds, “I don’t care,” regarding when I asked him if I should come or not. Note to boys: just say yes, yes I want you along.

5. When you say I shed my long hair in the bathroom drain, but in reality it’s you who sheds like a Yeti.
No further description necessary.

6. A toilet paper roll with only three squares left  is just as useful as an empty toilet paper roll.
Three squares isn’t going to solve anything. I know boys don’t quite understand the physics of this, and probably never will, but three squares is useful for one thing and one thing only, and that’s dabbing bronzer off our face when we’ve accidentally made our chin three shades darker than our neck. 50 shades of bronzer… now that’s a book I need to write.

7. The bathroom mirror.
I just don’t understand how a mirror can get so dirty in less than a day. Serious question, when boys shave do they use a Crazy Daisy to rinse their face off? Or do they just put a bunch of water in their cheeks and then smack them together like Kevin McCallister and watch it fly all over?

8. When I put stuff away and am accused of “hiding stuff.”
Shoes, keys, socks, wrinkle spray, wallet, jeans, phone charger, headphones, razor, jacket, Dear God the list goes on and on of things I have “hidden.”

9. When you leave one chip in the bag and put it back.
Especially when they’re Cool Ranchies. Just save me the pain and destroy all of the evidence, would ya?

10. When we watch a movie or TV show I’m excited about and you’re on your phone the. entire. time.
At least pretend to hide your phone behind a pillow or something like I do when we’re watching football.