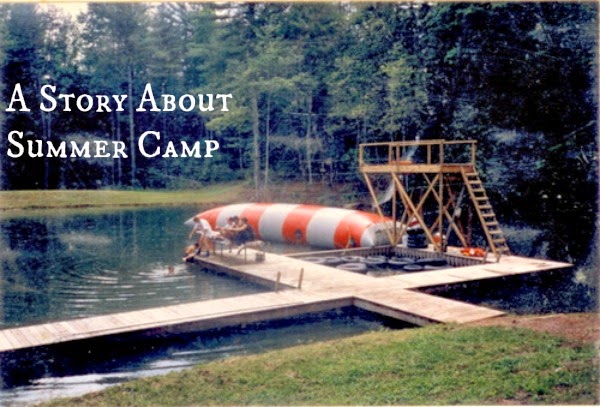 Fifteen years ago on July 24th 1999,  I left for my first week long stay away from home at summer camp. After watching and obsessing over the Parent Trap I begged my parents to send me to camp to find my long lost English twin. After checking into Camp Walden For Girls in Maine (the camp from the movie) and learning that it was around $5,000 to stay for the week, my parents chose to send me to a camp in Iowa instead.
A little place of outdoor heaven called Camp Foster in Okoboji.

I was sent a pack-list in the mail about two months before camp started. I can still picture the small booklet in my head because I studied it almost every night leading up to the big day. There were some nights I even fell asleep reading it in bed. If I had my camp scrapbook in front of me I would take a photo of the booklet to show (because yeah, I made a camp scrapbook obviously) but sadly all 482 of my scrapbooks are in Nebraska.

What I’m saying is that I was excited. I started packing about two weeks early to ensure I wouldn’t forget any of my best Umbro shorts, my favorite Nike one-piece swimsuits, my coolest Rider sandals (so silver or pink obviously), or any of my classiest athletic t-shirts- i.e. any shirt that read “Eat, Sleep (fill in the last word with any sport and I owned the shirt.)

When I finally got to camp it was full of every camp cliche I had ever hoped for. Bunk-beds in cabins and a mess hall and canoes by a lake and a huge a flag pole in the middle of it all (which I would come to hate once I learned “flag call” was every morning at 7:00 a.m.)  The only thing missing was the dirty mirror outside the rec room that said “this mirror is clean, are you?” Please someone get the 90s Nickelodeon reference.

Anyway, if you’ve ever been to camp you know that there is always a “cute girl” cabin. Because I watched Bug Juice before leaving for Foster, I had high hopes of being in that cute girl cabin, and perhaps even finding myself a camp boyfriend. I mean why not? It was summer camp after all, crazy things were about to happen! And what I failed to mention above is that beyond all of my athletic attire I packed, I also packed a few sunflower outfits from Limited Too, you know for special occasions.

But sadly reality was about to hit me right in the face.

I think I first realized I was in the weirdo cabin one morning in the mess hall when suddenly almost all of the other tables started the “we want back rubs” chant. The girl cabins would demand back rubs from their favorite boy cabins and vice versa. It looked like fun so God bless our hearts, Hakowie #137 (that was my cabin) decided to join in as well.

Then I realized we were definitely the weirdo cabin. There was no way around it.

And it made sense. We had two girls who only dressed as wizards (this was pre Harry Potter hype) one girl who wore her backpack at all times, but she refused to wear it anywhere but her front, so it was more like a stomach pack. Another girl in our cabin liked to wear pant-suits with her sneakers like she was always late to a business meeting, I still don’t know what that was about. And then we also had the camp smelly kid, the girl who pissed her bed every night yet never seemed to show up for shower time. I know a lot of kids suffer from bed wetting, they just don’t usually go to camp and take a top bunk. And then refuse to shower. Ah Shawnie. Wonder where she is today. And I wonder if she’s still wearing the same red shirt that hangs to her knees that says, “Beef. It’s What For Dinner.”

Besides the rest of the crew I just described,  there was my friend I came with, Sarah, and myself. We were the same age, but she looked at least five years older- a quality that would serve her very well in middle school. Luckily I had a very inflated self esteem at that age and failed to realize both my teeth and ears were about two sizes too big for my small body. I was 12 but looked 9, perhaps even 8. My feet however were bigger than most adults. And I almost always had chip crumbs in the corner of my mouth/chip mouth sores because I was always eating chips at camp. I packed like ten bags of Doritos just to be safe, they were like my security blanket.

So for our seven days at camp, Cabin Hakowie never once got back rubs. Well that’s not technically true I guess, on the third day we asked and no boys came over the mess hall staff felt bad for us so they came out from the kitchen (and even removed their plastic gloves) to cheer up the weird cabin. That’s kind of when you know things are bad. When the lunch ladies in hair nets and orthopedic shoes feel sorry for you.

And so I slowly gave up hopes of finding a camp boyfriend, who if I had to choose would have been a boy named Clayton who had spiky bleached white hair and wore a white puka shell necklace… Not that I remember him or anything. One time I got to talk to Clayton because our two cabins had a scheduled lake activity.  I thought he was going to touch my face, but he was actually just pointing to seaweed that was stuck to my forehead. It must have gotten there when I had fallen out of my canoe.

Even though I quickly started to hate camp after just a day or two because of all the bullshit we had to do- get up early to go to the flagpole, participate in stupid activities all damn day, eat crappy food, sleep in bunks that always seemed wet (thanks Shawnie) take cold showers, spend long nights singing the worst songs around the campfire, just to name a few things… Looking back I couldn’t be happier about the experience. It was as “cliche campy” as it gets.

I think every kid needs a camp experience. Or at least the realization that the cute girl cabin probably isn’t that fun anyway, and maybe it’s not so bad to belong with the weirdos after all.