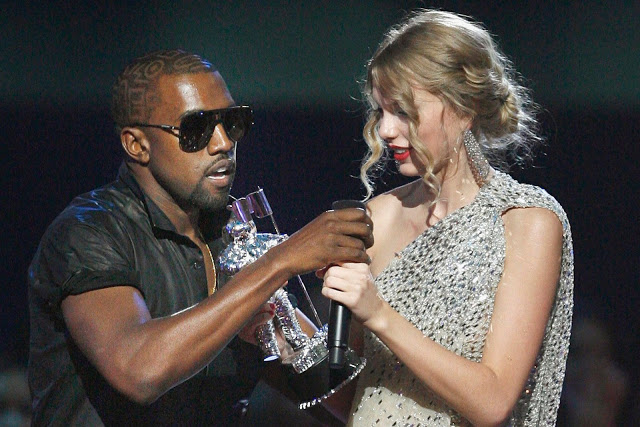 Kanye’s new lyrics about Taylor Swift that go a little something like this:


Okay, but no. I don’t even know where to start on this misogynistic bullshit about a man trying to take credit for the career of an insanely successful woman. It’s laughable. And perhaps he is joking, but he put the lyrics out there to his millions of fans and that’s damaging in itself.

And I was actually starting to like Kanye. I was really trying. I’d never been a fan of his arrogance or the way he treats women, but I think it was Caitlyn Jenner who made me think I should maybe reconsider and not loathe Kanye as much as I did. Jenner said something along the lines of him being very accepting of her transition which made me think perhaps Kanye isn’t all terrible after all… I don’t remember exactly, the fact I know anything about this family is embarrassing to me.

The point is I was starting to begrudge Kanye less. And then he releases this song “Famous,” openly mocking and belittling a woman whom he has already publicly shamed once,  and then he hides behind the the armor of “being an artist” by saying,

“First thing is I’m an artist and as an artist I will express how I feel with no censorship,” he wrote.

Followed by, and this is the line that really gets me,

“2nd thing I asked my wife for her blessings and she was cool with it.”

Really, Kanye? Your wife was cool with it? Kim was cool with you writing a song with questionable lyrics that would inevitably create controversy and draw more media attention toward you? No way.

And speaking of Kanye’s family, let’s say someday baby North West grows up to have an awesome career. How would he feel then if a man “jokingly” rapped about having sex with her, undermining her success as a woman and what she’s worked hard for by adding, “I made that bitch famous.”

I’m just tired of it.

And this is what happens to me on Mondays when I’ve had too much coffee and am stalling other tasks. I get involved in things that rile me up.

Okay, I’m going to go pack t-shirts now. What do you think of all this? I understand Kanye’s a good artist, but this was just too much for me.