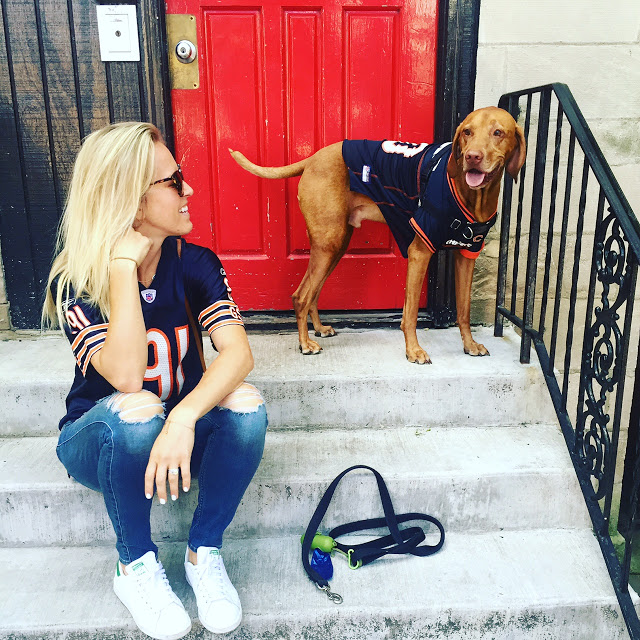 It all started with an Instagram video of me giving Harlow a little piece of avocado at his birthday dinner last night, which was obviously followed with an entire hotdog from Weiner Circle right after.

I started getting messages via Insta from people concerned I was giving Har avocados. Be careful, those are poisonous to dogs, several warned. I got one message after the other, after the other. About 30 in total. The messages were not rude by any means, just fellow dog enthusiasts looking out for Harlow’s well being.

I panicked, as I do every time I’m worried Harlow is sick or is just about to get sick. Like the time he sneakily ate 16 chicken wing bones in about four minutes. SIXTEEN. BONES. And then we went on a nine hour car ride immediately after. Much to my surprise, he didn’t get sick once.

Anyway, first I texted a friend who’s dad is a vet, then I turned to google. Both confirmed this, “Avocado contains a toxin called persin, but despite the rumors, avocado is not poisonous to dogs. But can be to cattle.”

I’ve given Harlow avocados since he was a baby. Not a lot by any means, just a bite here or there. But I think that may have been his last bite yesterday- at least that I’ll show to the insta world anyway. I really had no idea it could be harmful. But I guess we’ll add it to the list with popcorn, grapes, chocolate, poppy seeds, ext.

However it’s worth noting Harlow eats mysterious garbage food at the park regularly so….

So last night’s dinner was great except for the avocados, and the scary man who walked by the restaurant patio we were sitting on to “say hello” to Harlow.

Harlow will pick up certain scents from people he doesn’t like and he will go absolutely nuts. It happens far more frequently when it’s just me, rather than when Chris is along.

However as this man staggered toward our table, clearly very intoxicated, I could just tell Harlow wasn’t going to like him. And I was right. He barked and growled and did his best to keep this man away, but the guy persisted.  Chris and I were cordial and apologizing for Harlow’s behavior, but eventually the guy got down on his knees, face to face with Harlow and just glared at him.

And this is when I got mad because Harlow wasn’t barking anymore, but cowering under the table with his tail tucked high between his legs. See Harlow talks a big game, but he has zero back up. He regularly runs from moths, centipedes and the occasional large fly.

The man drunkenly told us he was a dog trainer. He said he has seven pit bulls at home and he could “make our dog scary” if we wanted.

And now if you’re like me your heart just broke a little and you added seven more pit bulls to your dog prayer list. Because yes, I pray for animals every single night. My list is very long. It’s fine, we all have our things.

The guy begrudgingly left our table only after the manager and two hosts asked him several times to leave. I was so tempted to follow him home in hopes of finding where he was keeping those poor seven pits because I can’t stand to think about what their lives must be like.

Maybe at the very best he was lying and doesn’t own any dogs. I will never know. But I will most definitely waste a lot of time worrying about it.

Moral of the story: don’t give avocados to cattle.

Is it Friday yet? Man, it’s been a long week.