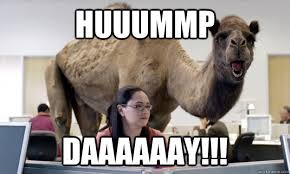 Well guys,  I have to admit I’m not having as good of a hump-day as the image above would portray. My spirits are quite low today in fact. (But I won’t pretend that image isn’t cheering me up just a bit.)
The thing is I had a pretty important meeting just a few hours ago. It was a sales opportunity that could have been huge for me had I been able to close the deal. Like the kind of huge where I dreamed it might actually get Chris and I one of those real fancy apartments with two bathrooms. Maybe even dare I say… a his and hers sink? You can’t blame a girl for dreaming. I prepared for this meeting like the young professional I am by getting up extra early to shower, I typically prefer to shower at night and go to sleep with soaking wet hair just to add a little excitement to my morning regarding what kind of bed head I will wake up with. But not this time. Today I meant business. Right after I got out of the shower I looked myself in the mirror and gave a little pep talk- of course this was after I drew a USA flag and a astronaut helmet around my head in the condensation on the mirror like I always do. Just in case I’ve been right all along and my life truly is its very own Truman Show…
After my inspirational “You can do anything you set your mind to, this is your day! If Will Smith can sell whatever those weird machines were in Pursuit of Happiness then by golly you can sell this!” talk with myself, I went over my presentation, drank two cups of coffee and I was good to go. I was ready to sell a rainbow flag to the Westboro Baptist Church.
Because I am a bit OCD when it comes to punctuality, I arrived roughly fifty-five minutes early. You know what they say, if you’re not an hour early, you’re late. So I was perfectly okay with sitting in my car for a bit while I talked to the Universe about sending positive vibes my way. Just kidding I don’t do that! That’d be weird. I don’t make vision boards either…
I walked into the meeting feeling confident and in control. Sadly, so were the people I met with. I don’t want to bore you with the details of the actual meeting, but let’s just say I’ve somehow wound up in a position where I am often working with very intelligent people. Like know-how-to-create-computers intelligent. And sometimes these people ask me questions that I’m not sure how to answer. And then I just want to hide in the corner of the room and scream leave me alone! the more they continue to ask such difficult questions.
I feel like one of the most important qualities in sales (and in life in general really) is confidence. But once that confidence has been damaged, it’s pretty damn hard to recover. Potential clients can smell fear. And I was suddenly fearful.  No matter how much I yelled at myself to pull it together you idiot! I was feeling more and more like an insecure five-year-old who was sitting in a meeting she shouldn’t have been in. I went from being a confident salesman saying “you can take a good look a t-bone by sticking your head up a bulls ass, but I’d rather take the butchers word for it,” to a stuttering “you can get a good look at a butchers ass by sticking your head up a bull…wait I mean… you can eat a butcher… ahh shit….” in a matter of two minutes.
I was in this meeting for over an hour. By the end of it I was able to get ahold of myself enough to demonstrate the product knowledge I did know and was able to be completely honest about the fact they were asking questions I had never been asked before, but I would find the answers. Because that’s what you’re supposed to say, right?
Luckily the deal hasn’t been completely shot to the wind- yet. I still might have a chance of pulling it through. A very slim chance, but it’s there. I just won’t be signing a lease on a new schnazzy apartment today like I had hoped.
In the meantime, if anyone needs me I’ll just be in my craft room making a new vision board. Listening to Adele.