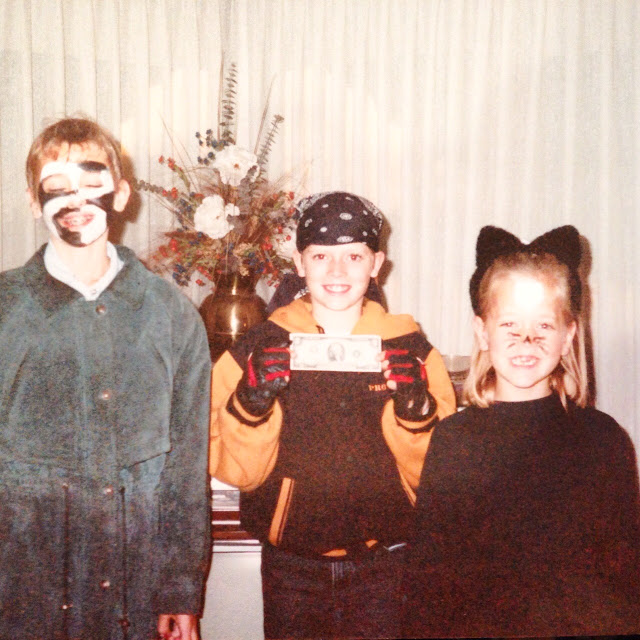 Have you seen kids’ Halloween costumes these days?

My sister sent me photos of my niece and nephew trick or treating at “trunk or treat” or “treat your trunk” I don’t know what it was, they were getting candy from the trunks of cars in a parking lot. I think. Who knows how kids trick or treat these days, it’s not like how I used to, when I was running all over town by myself at age four knocking on anyone’s door with my hand out like a little beggar.

The photos were adorable. All sorts of kids dressed as characters from Frozen. Or Ninja Turtles. And Superheros. But the thing was, I could tell what every kid was.

What happened to the fun days of costume ambiguity? When someone would open their door and you’d scream TRICK OR TREAT and they’d look at you for a second and tilt their head like, Oh I get it, someone’s parents forgot Halloween again…

Look at the photo above. What in the hell is going on there?

I’ll tell you what. A good old fashioned 90s Halloween.

What is my sister? Besides politically incorrect… I mean it would appear she’s in black face. And white face. And my brother is a …  biker? Or a pimp? I mean he’s holding a $2 bill so who knows. And I’m a cat. (Happy Cat day, by the way.) With a white diamond painted on my forehead just to make sure everyone gets a solid look at that nice Wolfe fivehead. Another Halloween where the Wolfe’s kid theme was WTF is going on here?

I don’t ever remember getting store bought costumes. If I was lucky I got the accessories (see ears.) Thus the reason I went as a cat/mouse/fox/skunk from 1993-2005. Had to put those ears to use, you know?

But I didn’t care. I thought store bought costumes were cheesy. Too commercial. Or perhaps my mom just brainwashed me enough to think that. In that case, well played, mom. Buying a new costume every year would get expensive. I did it in college and it was ridiculous.

Know what else is ridiculous? The fact that some parents don’t let their kids keep their candy.

How else are children going to learn that candy leads to cavities? It’s a tough lesson, but it’s a part of childhood.

Trick or treating also taught me the value of hard work.

Because I worked hard for my candy. Like damn hard. I would spend days mapping out my Halloween path, hitting up the biggest houses first that I knew gave away king size candy bars, then stopping by the mid size houses, and last on my list were the houses that passed out that “fun size” bullshit. It was hardly worth my time, but occasionally I humored those people just because I felt bad for them.

I worked fast and furious from 5 p.m. until 9 p.m. when I had to be back home. I literally ran ALL OVER my entire town. Halloween wasn’t a holiday for me. It was a work day.

And then I came home, dumped out my pillowcase of candy on the floor, and bathed in the riches of my hard work. School lunch for the next two weeks would consist of nothing but candy. I was the kid who would brush my teeth and then eat a piece of candy right after. It was heaven. My parents have the dentist bills to prove it.

Sadly these days I don’t even participate in trick or treating. It’s a little different in Lincoln Park than it was where I grew up. The kids here are taken around in their black Range Rovers and only want organic gluten free non GMO candy bars sans the candy purchased from the Farmers Market where 50% of profits goes back to starving children.

I bet if I sat out on my stoop with a bucket of candy the kids that would walk by would probably toss a dollar right back in it.

Another Halloween season is upon us, whatever you do, make it a good one this weekend!

Can anyone guess what I’m going as on Satuday? Clue: it’s one of my favorite pastimes… Follow on Instagram @thedailytay and you’ll find out. And you’ll also make me feel validated, so it’s a win/win!