My name is Valerie Owens and I am not a monster.

In the past few days I have been drug through the mud online and I think it’s time I give my side of things so you finally have a chance to know the real story.

I feel that I should probably start by saying that you may know me better as the “mad pooper.”

Or the Colorado Crapper. Or the Diarrhea Dasher. Sidewalk Shitter. Rancid Runner. Splatter Sprinter.  The Juicy Jogger. Fudge Fugitive. Turd Trotter. The Lincoln Log Leaker. Lead Singer of the Poo Flighters. Or Pam the Poopy Pants. (And no, my name isn’t even Pam!) It’s Valerie, as I’ve already said, Val to my close friends. 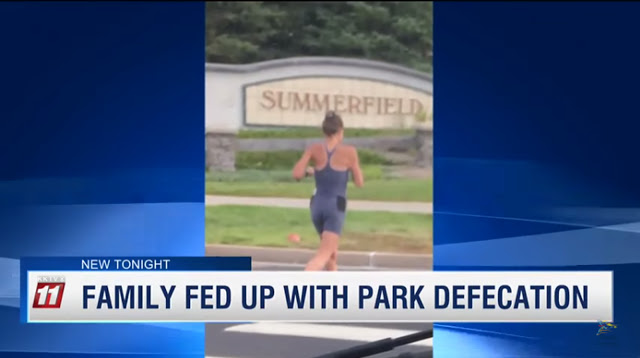 I am a wife and mother of three. I work at Jo-Ann’s fabric store off of 14th and Wayencott (not at the Rocky Mountain Chocolate Factory, as I’ve seen several of you speculate. Ha. Ha. RUDE.) In truth, I’ve probably helped you buy fleece for your tie-together Broncos themed fleece blankets. Go Broncs!

I attend the evangelical church “In His Arms and Under His Grace” every Sunday. I sing in the choir. I have held your hand during prayer. I have served your children brownies and chocolate sundaes after service.

I have a lot of hobbies. I like to cook. I like to read and write. And I love to play hide and seek with my children.

Just like you, I am a human being. And I have a story as to why I choose to defecate outside. Frequently.

Let me ask you this, do you choose your passions? Or do they choose you?

My passion is running and most recently, taking massive shits outside. Luckily for me, these two go hand in hand. I haven’t always been this way, and I’ll be the first to say I wouldn’t have chosen this for myself. But now that I’ve discovered it, it’s hard to go back.

It all began about four months ago while I was running in my neighborhood in the city where I live, beautiful Colorado Springs. About three miles into my ten mile jog my bowels started getting very angry. Was it my morning coffee? Or my morning bowl of black beans with fiber powder on top? I couldn’t be sure, and truthfully it didn’t matter as I had to go, and didn’t have many options. I’m sure this is a feeling we can all relate to, when you’re on a run and have to squeeze-cheek it four blocks home just hoping you make it in time; sweat dancing on your brow, gurgles coming from your midsection.

Well I didn’t make it home, instead I hid myself as best as I could in the suburban neighborhood I was in, and proceeded to relieve myself.

And in that moment I felt as free and wonderful as I ever had in my entire life. It was like I was being born again. I heard birds singing, waterfalls falling, hints of cinnamon and sulfur in the air. I felt… alive.

So that’s how it all began. I didn’t intend to be this way. It just kind of happened. And once you know such bliss, how do you just turn away from it? You don’t! You can’t.

And so I didn’t. But I never thought it would be so blown out of proportion quite like this. Dogs do it everyday for God’s sake and I don’t see articles or news stories being written about them. If I could teach my yellow lab, Nutters, to pick up after me on a jog I would, but sadly his hips don’t allow him to run with me anymore. (Thanks for the reminder!) Any other depressing things you’d like to bring up about my life?!

I’ve read reports that people say I am intentionally doing this out in public for people to see, which is absurd! I assure you this is not the case. If it were, there would be more than just a handful of you who have seen me do it, as I have shit all over this great city. All over it.

I don’t think there’s a backyard I have missed. I have literally hit them all, even the ones just being built out on the east side of town. If you live in the Springs, look out your window toward your yard right now, and know that’s where I have shit. Maybe more than once. Yes, this is a big city, but I am a trained marathon runner. With a little bit of discipline, it’s not that difficult.

As for the reports claiming that children have repeatedly watched me, well to that I apologize. And would like to say that I 100% did not realize they were children. I assumed they were small adults dressed in children clothing with children-like facial features. How can one ever really be certain these days? Children look so old now! Adults look so young!

I am not writing this today for attention. I’d just like my story to be known. I don’t do what I do to hurt others. I do do it simply because it brings me joy. And relief.

So next time you want to throw stones, or post another snotty flyer, please remember I’m just a woman on a jog, doing what I love.

Don’t judge me, be inspired by me.


***based on true events about a mad pooper, some names have been changed.***
**mostly made-up, though. so what I’m saying is this is satire (FAKE.)
*i don’t condone shitting in public.