“It’s all about RELATIONSHIPS.” 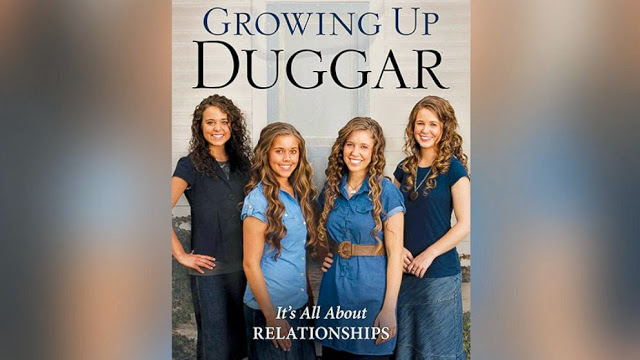 I could just stop right here and let us all stare at the cover of this book and the words on it because really that says enough. But I won’t.

In all honestly, I’ve sat on this one for a few days now trying to collect the right words for what I want to say. I still don’t think this is going to be very eloquently put and some of you might think I’m way off here. But that’s fine, I tend to get a little heated and messy when talking about child molesters.

I’ve “jokingly” been a fan of this family for awhile. I’ve wrote a few posts about them in the past… I say jokingly because I’ve never actually watched an entire episode. I’ve just seen them on various talk shows and magazine covers and they make for great material.

The patriarch of the family is named Jim Bob after all and he demands his daughters dress in ankle length skirts and none of the children are allowed to kiss before marriage.

It recently came out that the oldest son, Josh Duggar, molested at least five girls when he was 14. Four were his little sisters. And I’m going to be very surprised if it’s only five girls. There’s always more. Especially in a situation where the abuser is allowed to get away with it for so long.

Josh admitted his wrongdoings to the public- only after it was made public a few days ago I should add. He’s prayed about it, asked for forgiveness, and he regrets what he did as a teenager. And because of this, Josh has a lot of supporters still standing behind him.

I’m not one of them.

Speaking of children, let’s talk about his sisters for a second. Let’s talk about the kids who were sexually abused by someone they knew and trusted. By someone that lived in their house with them. They had to face their abuser every single day. I can’t even begin to imagine what that must have been like. But I have a feeling it’s ten times worse than the “media attack” Josh is “suffering” from right now.

Because this won’t last, the media will move on to the next thing that catches their attention any day now. But the scars left on a child from being sexually abused, I’ve heard those tend to hang around for a bit longer.

So what exactly happened I wonder? The victims finally worked up the courage to tell someone and then their older brother was just given a slap on the wrist for his year long “mistake” and was sent to help a family friend to build stuff for the summer?

Then Josh came home and everything was just back to normal? It was all swept under the rug so their TV show about good old fashioned values could start? You can’t work off the urge to molest children. It doesn’t just go away like that.

I guess I’m just wondering why a family who is aware there is abuse going on would knowingly sign a contract with a TV network to further expose their children, making a reality star out of a guy who should have been behind bars. Why Jim Bob, why?

Before all of this, I was pretty much indifferent about the Duggars. They were a joke to me more or less.

I wasn’t excited or giddy to hear this story and see them go down like this like a lot of people have been over the past few days. I was sad. Not for the Duggars “the TV show family”, but for the victims. I’m sad they have to live through this all over again right now.

Then again who are we kidding, they’ve been living through this every single day since it happened.

I’d really like to know, what are your thoughts on this?