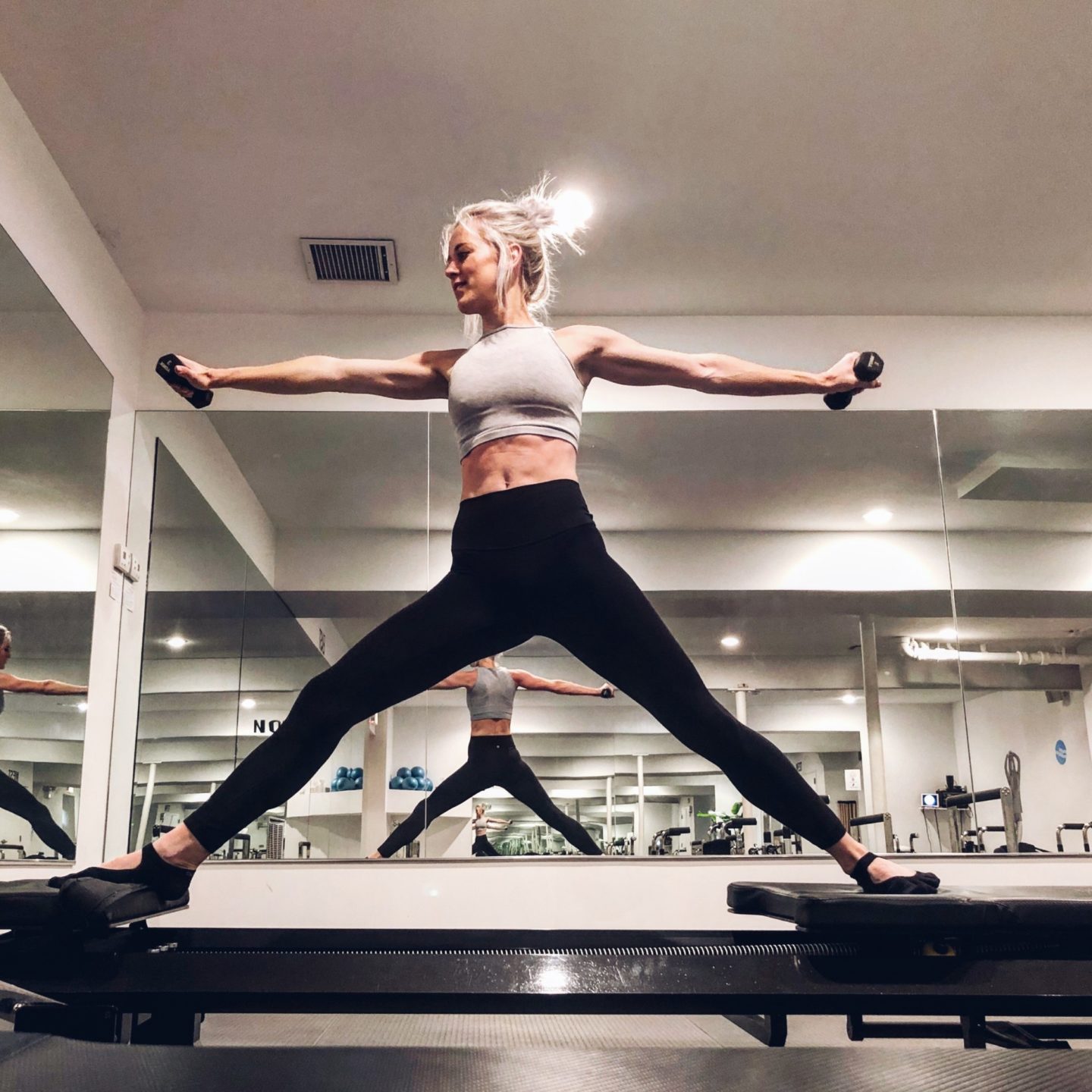 Three years ago I went to a psychic and she told me that I was going to get, “very into working out,” and I was like, no way. I had lived in Chicago for nearly five years and had never stepped foot in a gym. (Okay that’s a lie, I did try one class for free at “Flirty Girl Fitness,” but left about ten minutes in because it wasn’t for me.) I always worried I wasn’t a “flirty girl,” and sadly it was confirmed that day in the free trial class.

As I was saying. Prior to pilates, I hated and I mean HATED, to work out. (As an adult. As a kid I enjoyed “physical fitness.” More on that in a bit.)

I love being active, I just hate classes, treadmills, ellipticals, ext. However back at this time, I was about to get married, (which I may have mentioned to the psychic- go figure) and I wanted to get a little more tone.

And so I read somewhere that pilates is what most of the celebs did, (celebs with the long, lean, but very strong bodies I admired,) and so I thought I might as well give it a try. Three years later, I’m still giving it a try.

I’ve even become that “workout person” I used to side eye from my couch. I catch myself saying things like, “I have such a clearer mind when I can get an hour workout in the morning,” and, “it really is a mind, body, soul, workout!” But wait, my annoyingness doesn’t stop there- I’ve also become a grunter in class.

We were planking yesterday and I heard someone being a little obnoxious with their noises and thought to myself, get it together, and then I realized it was me! I am the grunter in class. We all know that person. And now it’s me. I breathe loud, I grunt hard, and I kind of don’t give a shit because I’m at my element for those fifty minutes.

I just said, I’m at my element for those fifty minutes.  WHO AM I?

I think if anything, that’s kid-me popping out. As I child I was really into fitness. Like to the point where it was weird. The first fan letter I wrote was to Arnold Schwarzenegger (this is 100% true.) I wrote it on my Lisa Frank stationary and asked him about his workout routine. It’s admirable, Mr. S! Do you mind sharing what you do? I complimented him on his biceps, his pecs, his tris, just normal 7 year old girl stuff!

When I was eight, I begged my dad to put me on a weight lifting regimen. I had a little notebook detailing my “reps for the day.” I was bench pressing the bar by age nine and my favorite “game” to play was “hold your legs out in front of you” on the tricep dip machine for as long possible. My best was three minutes. I know, I know, it’s not good for kids to lift weights, but it was the 90s. No one cared.

Long story short, after high school I lost my motivation to work out for about ten years. I think it was because I was so dedicated to sports for those first 18 years (even as toddler I was doing squats) that I wanted to be done with it all.

And so I lost muscle, lost endurance, blah blah blah.

I’m getting to the point in this post where my initial idea of writing about, “HOW TO GET MOTIVATION TO WORKOUT WHEN YOU’VE LOST IT,” has been forgotten and I need to get back to it or get the hell out before I waste any more of your time.

So here’s the deal, just like in those ten years of not wanting to do anything, I still get that same feeling from time to time. Yesterday was my first day back to pilates since about March 1st. So when I’m lacking motivation, this is what I do:

I commit to working out for one day. That’s it. If I say in my head, “I’m going all month,” that feels daunting and freaks me out. So I take it day by day.

After one day is down I almost always want to go back for another.

And once I sign up for day two, I kind of have to go or I’ll get charged if I don’t. I pay enough for pilates so there’s no way I’m paying extra for a late cancel. If your gym doesn’t charge you for not showing up, try charging yourself. Start a “I didn’t workout so now I have to pay,” jar. That’s probably lame, but idk, it could work.

The other thing I do is put on workout clothes right when I get up (not the comfortable loungey ones) but the tight bra tops that kinda hurt, because once I have that on I might as well put it to use.

Finally, I try to just suck it up and remind myself it’s only 50 minutes of my life. And it makes me feel good! *And I usually promise myself a treat after, like a nice coffee because I’M CRAZY LIKE THAT!

Really though, my best advice is to find a workout you enjoy. And keep trying until you do (if it’s important to you that is, and if it’s not, just walk your dog?! Do you.)

And if home workouts are your thing, my college pal turned New York fitness extraordinaire, Mary, is a part of a really cool new thing where you can access live online fitness classes from anywhere! It’s called Obe, check it out here. You get your first week free 🙂 Mary is a total badass so if she’s a part of this, I know it must be a good thing.

And now I’m going to get out of here on this, I think the moral of the story here is that if you own a fitness studio you should open a psychic room next to it and tell everyone who comes in that they’re going to get, “very into working out.”

Now here’s a pic of me about to grunt mid workout. Enjoy! 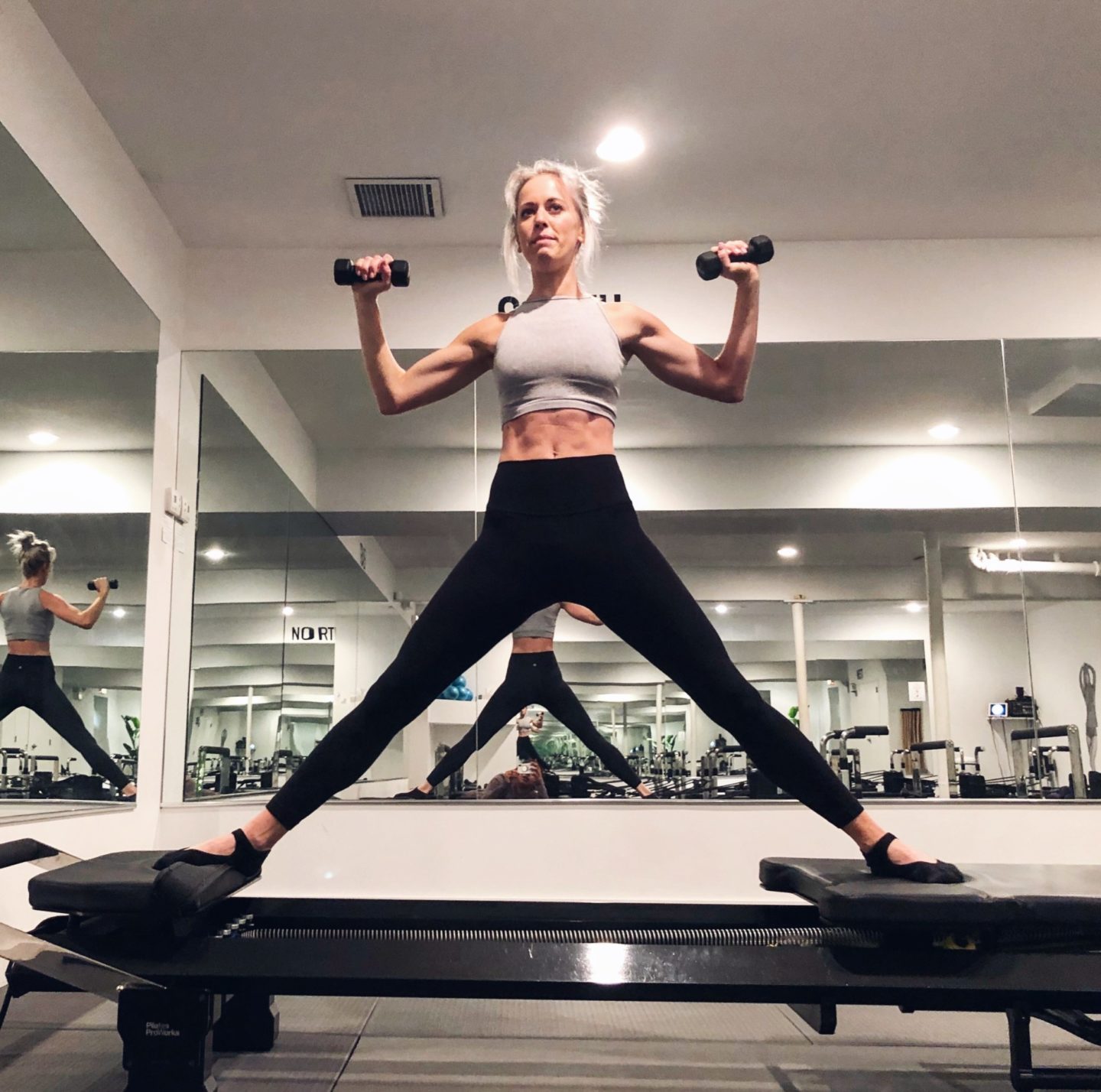