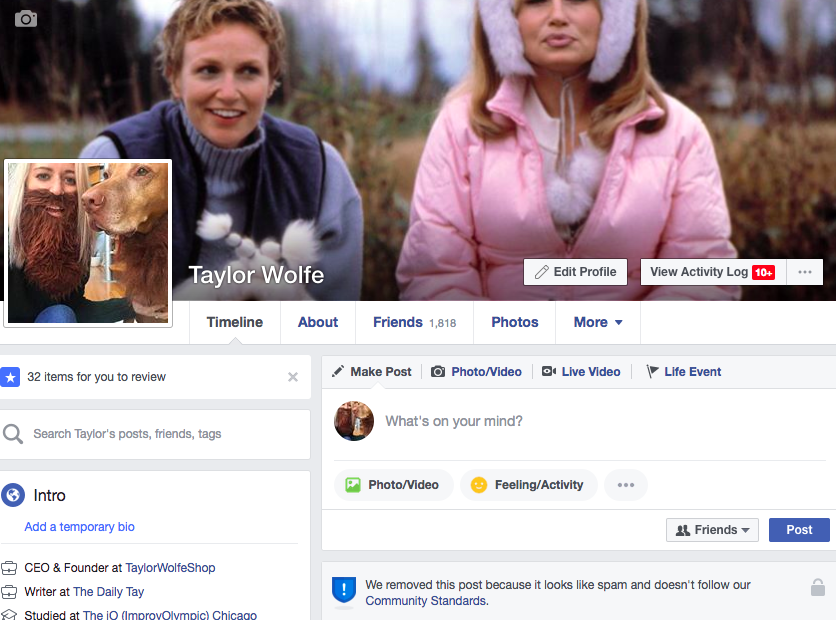 I am currently writing you this letter from the confines of Facebook jail.

Yes, you heard that correctly. As of Wednesday evening at 8:00 p.m. I have been admitted to Facebook Jail, inmate number 45998321. Sentencing: a minimum of three days. (A small possibility of getting out early for good behavior.)

It’s cold and lonely here, but I am trying to make the best of it. I have a bunkmate named, Harlow. He’s pretty cool, but he farts a lot in his sleep. The food is okay. It’s mostly just cereal and black beans. The one good thing is that there’s a lot of wine, I couldn’t survive in here without the wine.

Calm down, inmate. Someone on the outside yells when they see me getting upset again. What caused my outburst this time? Another dog pic. It’s ALWAYS a dog pic. This one was a photo of little puppies in an Easter basket and when my finger naturally went to LIKE it, the electrical Facebook fence shocked me, YOU CAN’T DO THIS, YOU ARE BANNED, it reminded me. (Thus the outburst.)

So yes, I’m allowed to see the Facebook world going on around me, I just can’t participate in it. Well played, Zuckerberg. WELL PLAYED. If they were to block me completely, then I may come to my senses and realize I don’t need this alternate world, so instead, they tease me with it. They lock me in my cell, show me a 1000 pics of puppies, and don’t allow me to LIKE a single one of them.

I’m trying to keep my spirits up, but it’s hard. With every hour that passes I’m losing a little bit of myself. Forgetting what life was like on the outside. Or on the inside? I can’t tell anymore…

I’m just counting the minutes, hoping my appeal is heard. The “complaining party” has admitted this was a mistake. NO BIG DEAL. Just an innocent 40 hour mistake. I was turned in for a post from 2+ years when I shared a door hanger I thought was cool. I do not sell said door hanger, I have never sold door hangers, no intention to sell door hangers, but the complaining party (who also does not sell door hangers) said it was copyright infringement. And it probably was (by the door-hanger-maker. Not me, the consumer.) This “incident” would be no different than if you found a photo of a product you liked, shared it on your page, and then went on your merry way.

I may still be a little frustrated by this, if you can’t tell. I’ve got too much time to dwell here in FB jail.

I find it discouraging that one person (or one large institution) can accuse you of something so totally bogus and without a second thought, (or even looking into it,) Facebook goes, yup you’re right. They’re banned. Business is CLOSEDDDDD.

So let this be a lesson, my friends, don’t put all of your eggs (or puppies) in one basket. Use several platforms, balance them out, or at the very least, don’t count on one too heavily. Because in the land of the internets, all it takes one simple swipe to have it all shut down.

And if you got to this post by Facebook today, that’s because my wonderful blog assistant is allowed to pass my notes onto the outside world… She can also smuggle me gum on the inside. But please don’t tell Mark Zuckerberg this.

I have to go now, it’s almost lunch time and I think we’re getting beans today. Pretty excited. If you see my parents, tell them hello for me. Tell them I’ll be out soon. And please for the love of God, never take for your Facebook Freedom for granted. LIKE pics of dogs as if there’s no tomorrow!