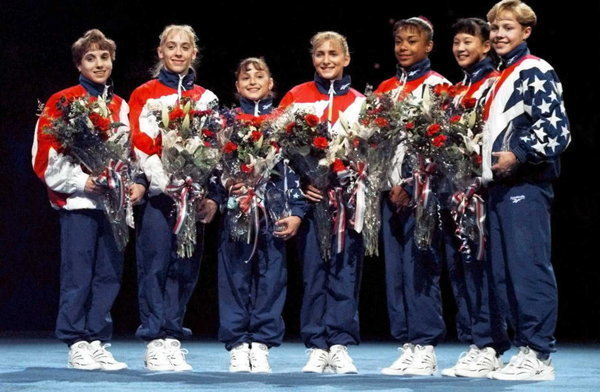 It was the summer of 1996 and I was nine years old. I was overly competitive, bursting at the seems with energy, and in LOVE with our new trampoline. I could do a front flip, back flip, ariel, swivel hips, (and would tell you I could do all of these things) and basically any other trick someone challenged me to.

But more importantly, I was in love with the 1996 Olympics Womens Gymnastics Team.

When I wasn’t practicing my routines on the trampoline, or the rings (which hung from our swing set,) or balance beam (the wood plank across the top of our swing set…) I was glued to the fat television in our living room taking in every second of the womens gymnastic team. The Magnificent Seven. Or Eight if you counted me. *I counted me.

This team was my life. When I look back on this obsession, I think it’s because these were some of the first women athletes I recall seeing celebrated on TV. I obviously know there were others before them, but as a nine year old, these were the first I’d seen. They were strong and fast AND beautiful! Everything I wanted to be.

And they wore cute sparkly outfits (another huge reason I loved them.) When I was little I remember feeling like there were only two categories for girls to fit into: tom boy or girly girl. You could not be both.

And yet I always felt like I was somewhere in the middle. I wanted to go to basketball camp and dance camp. I liked to climb trees and play Barbies. So when I saw this powerful group of women; all extremely athletic, competitive faces on, but also wearing makeup and fun leotards, I felt like I had found my people.

And so I decided I should be an Olympian. It only made sense! Most likely for gymnastics in the 2000 Olympics. That would give me four years to train which was PLENTY of time. I remember thinking I was being realistic about the fact I would be 13 in 2000, which was the perfect age for a gymnast as I noted several of them were quite young. If memory serves, Dominique Moceanu was only 14 in 1996! And everyone loves the baby of the team. I would be that baby in 2000.

And if it fell through I always had track and basketball as a backup for 2004. I had so many options!

I studied everything about that team throughout the entire Olympics. How they walked, how they ran, how they twisted in floor routines, how they flipped their wrists after landing, popped their knees, wore their hair, I had it all down pat.

And then I would practice. Practice, practice, practice. Until I’d get tired of practicing and decide it was competition time. I would summon everyone in my house to come watch me. And usually at least no one showed up. Which was fine, because I didn’t need (OR WANT) the opinions of anyone in my family as they knew nothing about the art of gymnastics.

When it was time, I’d block out the cheers of my supporters, bow my head, and take a final deep breath as the announcer introduced me.

“Ladies and gentlemen, Taylor Wolfe performing Thriller on the trampoline.” Cue the blue boombox. Which usually didn’t work, so the music was only in my head.

I flicked my wrist, started to shimmy my shoulders, and began my routine.

Front flips. Back flips. Ariels. Butt busters. Once I went through my arsenal of tricks I simply repeated them. And after I repeated them, I’d move into an improvised ribbon dance, sans the ribbon. That was the beauty of my routines- they were so original and unique and really showcased my many talents. Clap pushups? WHY NOT? The judges would love the versatility. Sit ups? For sure. A few Jazzercise steps? Always.

By the end I would have gone through a full routine of trampoline tricks, jazz squares, a little tap dancing, aerobics, some ballet, and even some light mime work. My God, I had nailed it.

I finally bowed my head, telling the world I was done. And then I breathed heavily and smiled politely, just like I’d seen my girls do after their routines as I talked to my coach. *I was my coach.*

I nodded my head happily, excited my coach had declared it was the “BEST performance ever! No one has ever done something so beautiful.”

Naturally, it came as no surprise when I was awarded the gold medal. But I dipped my head and accepted my medal with grace and humility, just as I’d seen my girls of the Magnificent 7 do. I was almost brought to tears by my own humility, to be honest.

It was thanks to that fictional gold medal and the Olympic gymnasts of 1996, that I knew I could achieve anything!

Fast forward about 20 years. Sadly, I never made the Olympics. This was mostly due to a pretty mediocre work ethic, a terrible attitude, and just an overall lack of talent. But man, I came close.

By close I mean not at all. Until.. until two days when someone who now I consider a dear friend, posted this photo on HER instagram. 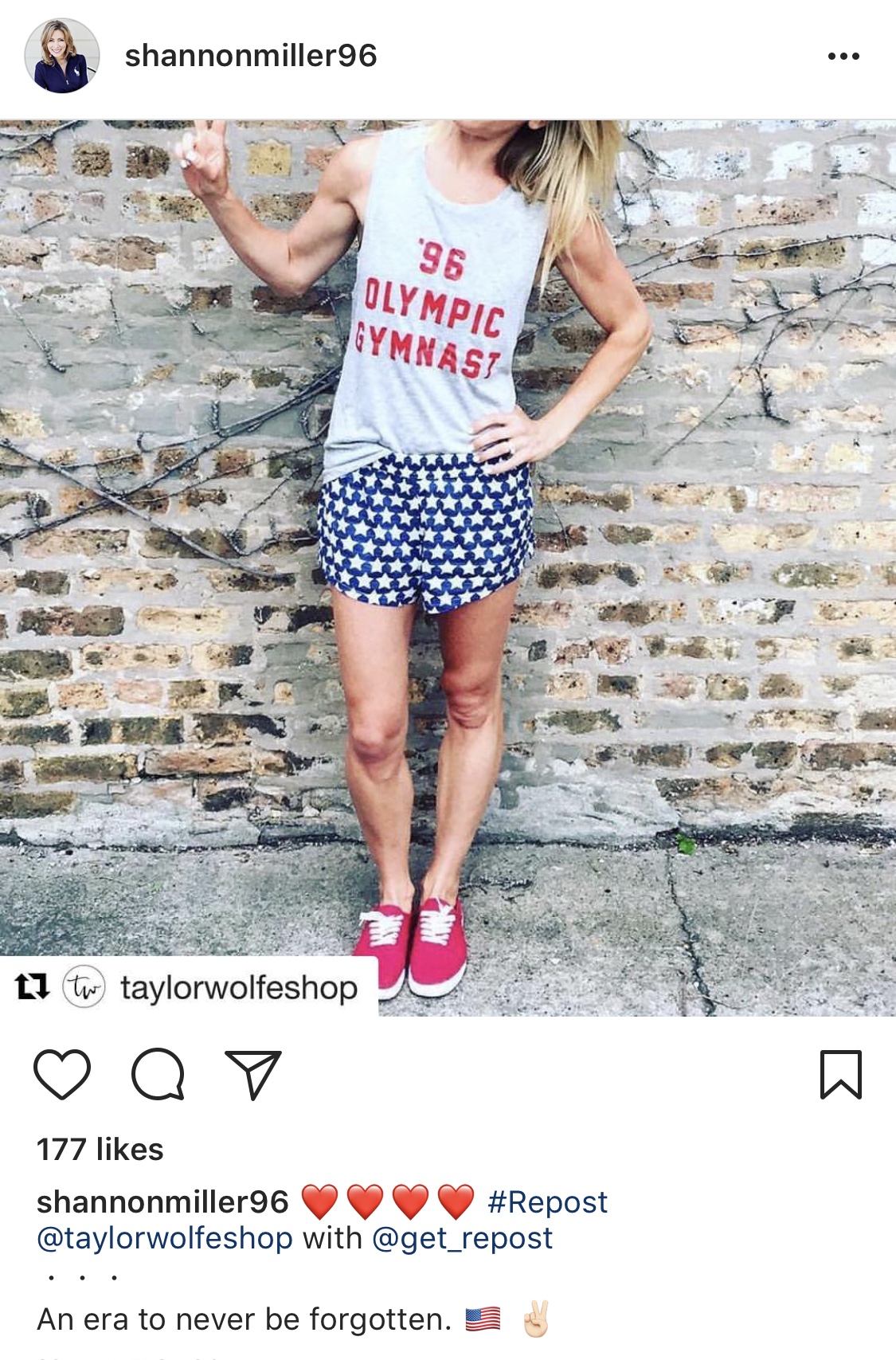 Shan reposted MY pic! Which according to what I know, means we are now best friends and I’m also an official member of the Magnificent Seven. Right? Right! We haven’t actually spoken, or messaged, but I bet it will happen soon. Because what best friend’s DON’T message, you know?

Anyway, thanks for reading today. If you have your own 1996 Gymnastics memory, tell me below please!

*Also Shannon, no need to be alarmed, I am totally joking. Unless you really want to be best friends and in that case, let’s do brunch! Wear your old leotard and I’ll wear mine!*