wound pic warning: I share a few images of my left arm and lower back with road rash at the bottom of this post, so just a heads up if that stuff makes you queasy. 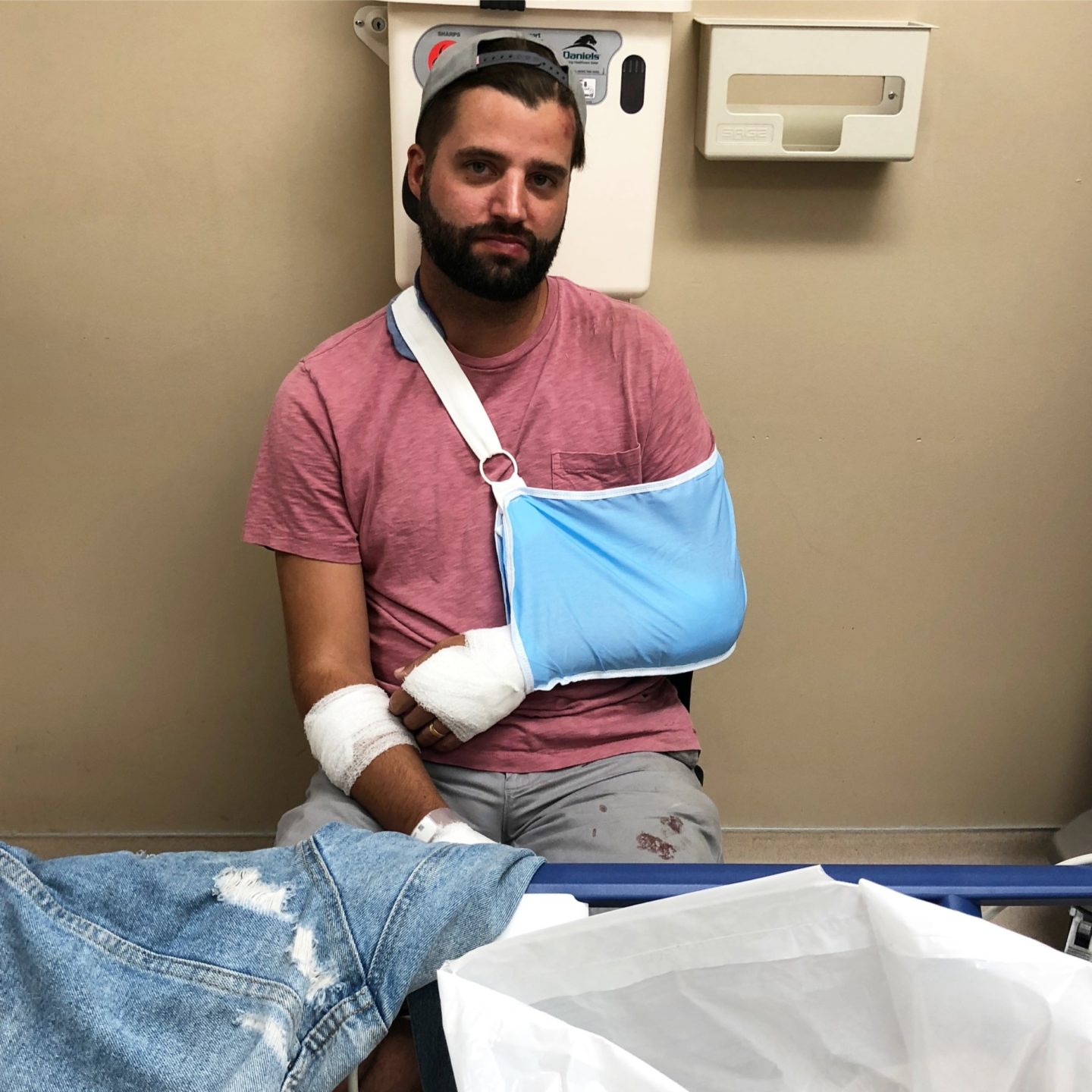 Well as it turns out, I’m not Tom Cruise (thank God.) I’m also not in the movies. So last Sunday afternoon when Chris and I were riding our moped and it hit an old tram track, trapping the wheel, causing the body of the scooter to slide out from under us, while our bodies were being thrown forward and onto the pavement, we did not bounce back up. Not even close.

Instead, we just collapsed there for awhile thinking, wait what was that?

One second Chris was commenting on the skyline, “it looks great from over here,” and I was agreeing, “Yeah! So great!” And the next, our bodies were lying in the street and our scooter was a few feet away from us, also lying in the street.

We were on a back street, so there wasn’t any traffic- blessing number one. Also, neither of us hit our heads- BIG blessing number two. However, we were really disoriented when we got up and couldn’t figure out what happened, or what to do. I immediately began picking up the contents of my purse which had been strewn all over. I remember being so happy to see that my iphone hadn’t cracked because it had flown out of its case, which is crazy because my skin was cracked but I didn’t realize that yet… But thank God for that iphone, right?!

After I picked up everything from my purse: lipstick, my wallet, my phone, random business cards, all VERY important stuff that needed to be tended to first, I must say, I realized my dress was ripped and bloody. And then I noticed I wasn’t wearing shoes. Those had also flown off. They were ripped and torn when I found them. And if you’re thinking we were going 60 mph or something crazy, we weren’t. We’re not completely sure, but based on the fact we had just turned off Clybourn street, (and it’s not easy to turn on the moped with two bodies on it) we think it was probably somewhere close to 20 or 25 mph. But as the nurse told me in the ER, even falling off a bike at a speed of 15 or 20 will cause some damage.

So there I was, all pissed off my dress was ripped and my shoes were destroyed. And then I noticed my arm was on fire.

That’s weird, I don’t recall my arm being on fire a minute ago….

I looked at it and noticed the skin was gone. It was just a mass of pink flesh with globs of greasy road engrained into it.

So then I panicked, naturally.

“Chris, I am dying. My skin is gone and I am dead. I look like an overcooked hot dog.”

Chris was still on the ground at this time. He was slow to get up since he broke his fall with his shoulder and his palms and his palms were… well, no longer there. They were just deep holes of gravel and road and blood.

In his clear state of thinking he said, “let’s get on the scooter and ride home and figure out what to do.”

“Chris, my clothes are shredded, my ass is gone (it wasn’t, just the skin) and I’m never getting on that thing again.”

So we called a Lyft.

I’ve heard ambulances cost millions of dollars and since I knew I already had to buy a new dress at this point (annoying!) I wasn’t about to waste a million dollars on an ambulance. And Chris knew a Lyft would be faster. He was right, she was there within two minutes.

“We’re not going to get blood on your car, we promise,” was the first thing we blurted before getting into her car.

Now if I’m a Lyft driver, that would be my first red flag. However, this woman took us in anyway, BLESS HER. I still plan to write a lengthy letter to Lyft praising this woman because she was a saint. And from what I recall, we really didn’t get blood in her car. We carefully used what clothing we had to keep our wounds closed off and away from her seats. This was very important to me because I respect other’s property.

“So…how’s your day going?” she asked.

I’m jk. But wouldn’t that be kinda funny? Instead she was like, “I’ll get you to a hospital fast and you two are going to be okay, I promise.”

For a second Chris and I thought about just going home. Because maybe it wasn’t that bad? I can’t explain our thought process during this time because it made literally zero sense. We went from thinking we were dying, to maybe just a nice bubble bath will help! I think this is called “being in shock?”

We decided on the ER. And this turned out to be a good decision.

We limped inside and I was immediately taken to a room while poor Chris had to wait about 25 minutes. The one benefit of having hot dog arms was that it got me a bed and an IV rather quickly.

As the nurse examined me, she inquired about the mysterious red sauce in my hair. And my chest. And arms.

It was then that I remembered I was carrying our leftovers home and from the looks of the sauce all over my body, I must have held onto that pizza until the very last second I had to let it go. So Pizza, if you’re reading this, please know that I fought for you! I truly did. I held onto you for dear life until momentum and gravity took over and ripped you from my dear  grasp. 🙁 I will carry this guilt forever.

Anyway, back to the ER nurse. She was so kind and patient with me as I nearly had a panic attack about the IV (needles ahh!) I’ve always known nurses were amazing people, but Sunday was just a reminder for me. Everyone was so comforting and didn’t judge me for trying to make hospital jokes whilst also being covered in pizza sauce and periodically dry heaving for no real reason other than panic and hysteria.

I was wheeled into x-rays, which hurt like hell having to roll onto my ouch spots, but found out nothing was broken. The diagnosis? Road rash. Lots of it.  On my arms, shoulders, near my lower back tattoo (which takes away from my LBT, so I don’t really mind) my elbows are scraped to hell, there’s a spot under my knee that is completely black from impact with the scooter and my ankles are swollen and scraped.

Upon leaving the hospital, the nurse told me that day two would be even worse. And she was right. What she didn’t mention, is that day three would be worse than two. I can’t quite explain the pain I feel when changing the bandages or taking a shower, but I’ll just say it’s intense. On day two I almost fainted because it was just too much. By day three I just gave into the pity party and cried all day long. I couldn’t sit, lay, or even go to the bathroom (because of the lower back wounds) without feeling burning pain on my skin. I also couldn’t get a shirt over my head… so I was walking around with a blanket or towel draped across my front.

I was a mess, to say the least.

But by day four I turned a corner! I bought better bandages, changed them more frequently, and finally found some comfort when trying to sleep. I sill sleep on towels (because I ooze… gross I know,) but I’ve managed to find a spot that doesn’t hurt my back or side and the swelling on my hip has gone down so I can turn just slightly.

And Harlow? Well he’s been an angel through all this. He won’t leave my side (more so than usual.) He sleeps on the bathroom rug when I shower (even at 3 a.m. because I couldn’t sleep.) And when we had dog walkers come they said he was really hesitant to get too far from our house.

He doesn’t have crazy zoomies or beg to go out, he just wants to lay near me and be with me. Because dogs are just the best. 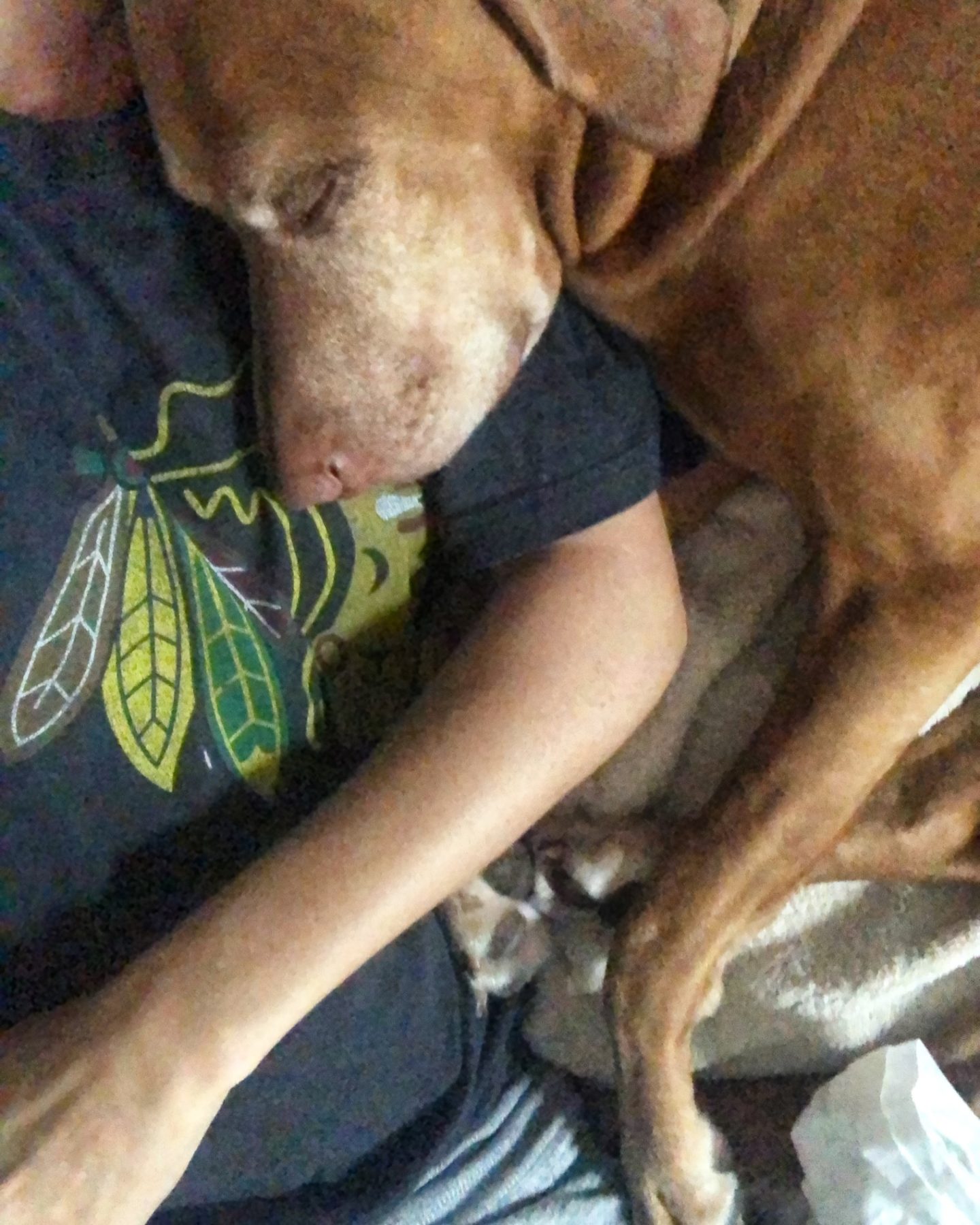 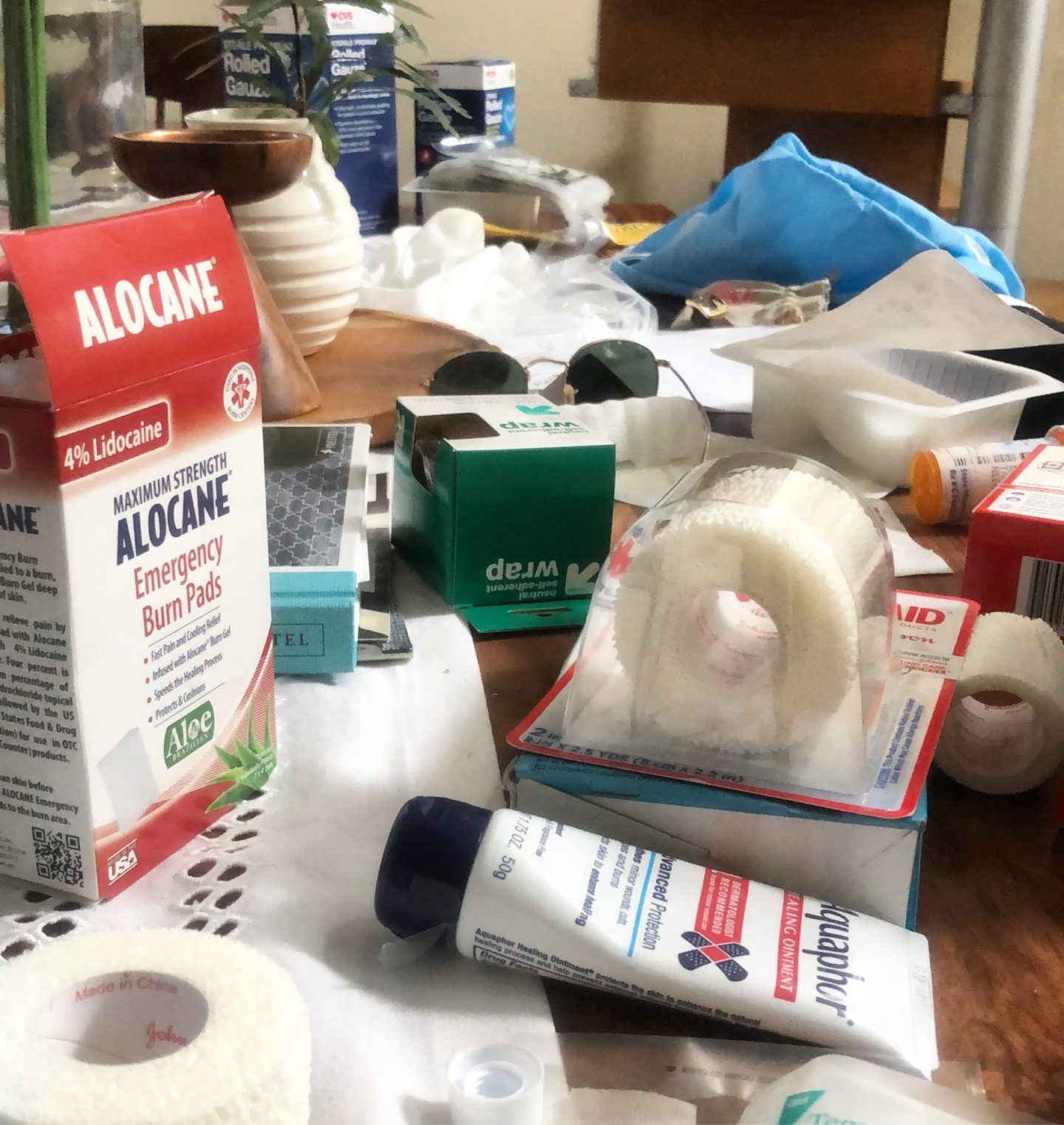 Chris is also on the up and up. His palms are healing and so is his shoulder. And I’ve learned these past few days that he’s a great nurse. He’s really really good at changing my bandages and he does it twice a day without complaining and is really patient, even as I scream in pain like I’m Steve Carrel in 40 Year Old Virgin (I like to keep my movie lines timely.)

We help each other pull shirts over our heads, get up from the couch, brush our hair, it’s the most basic things that seem to catch us, but we’re doing it and it’s getting easier each day.

We’ve also had the help of neighbors, friends, the most amazing dog walkers, and my parents help us out. We’re lucky to have had a lot of support this week.

It’s still weird to me how just that one split second knocked our world completely off balance. It could have been so much worse. It is so much worse for a lot of people. We got banged up, but it’s nothing that time and a hundred tubs of Vaseline won’t heal.

Here’s a few pics when we returned to where it all happened to check on ol Scooter. 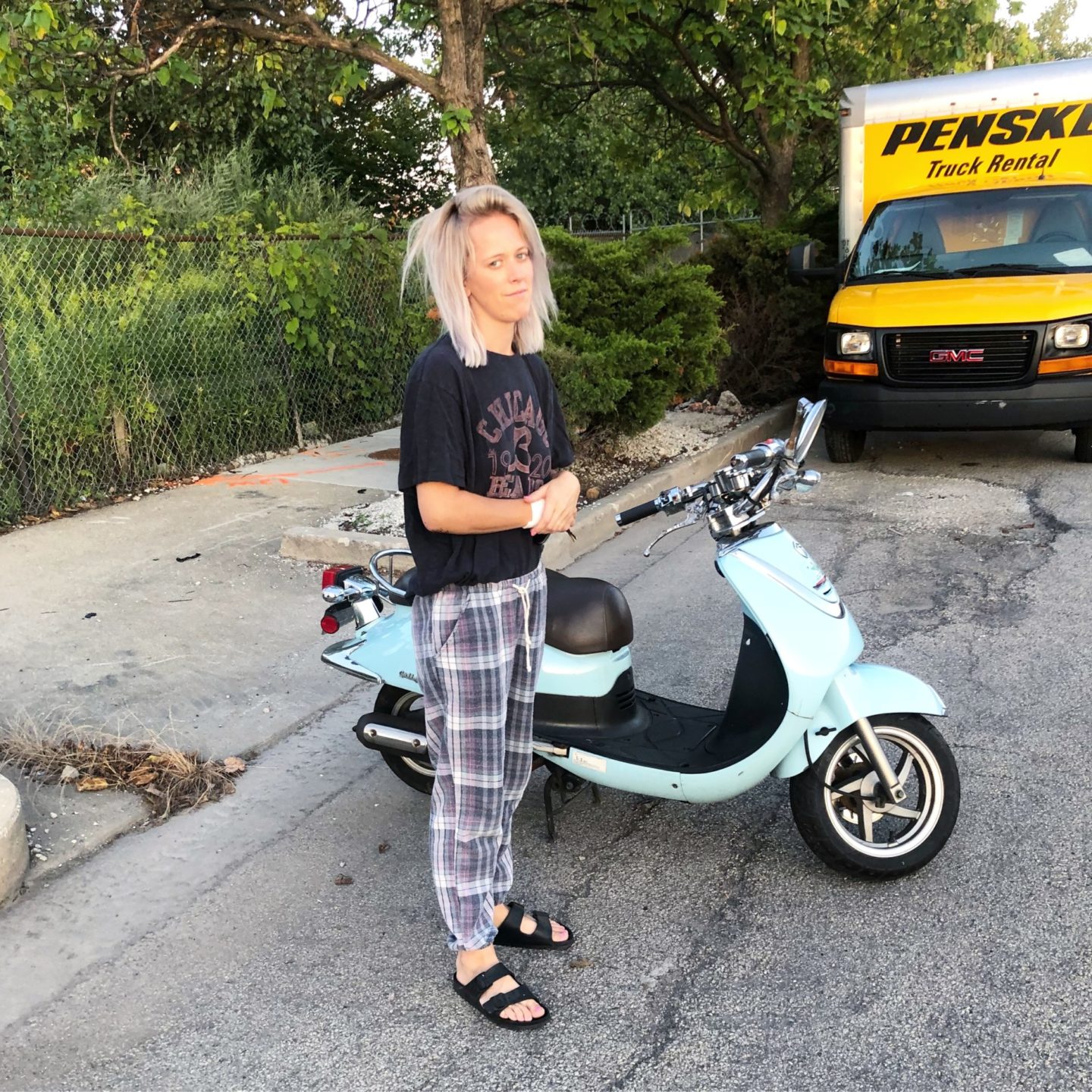 The evil tracks that caught us. 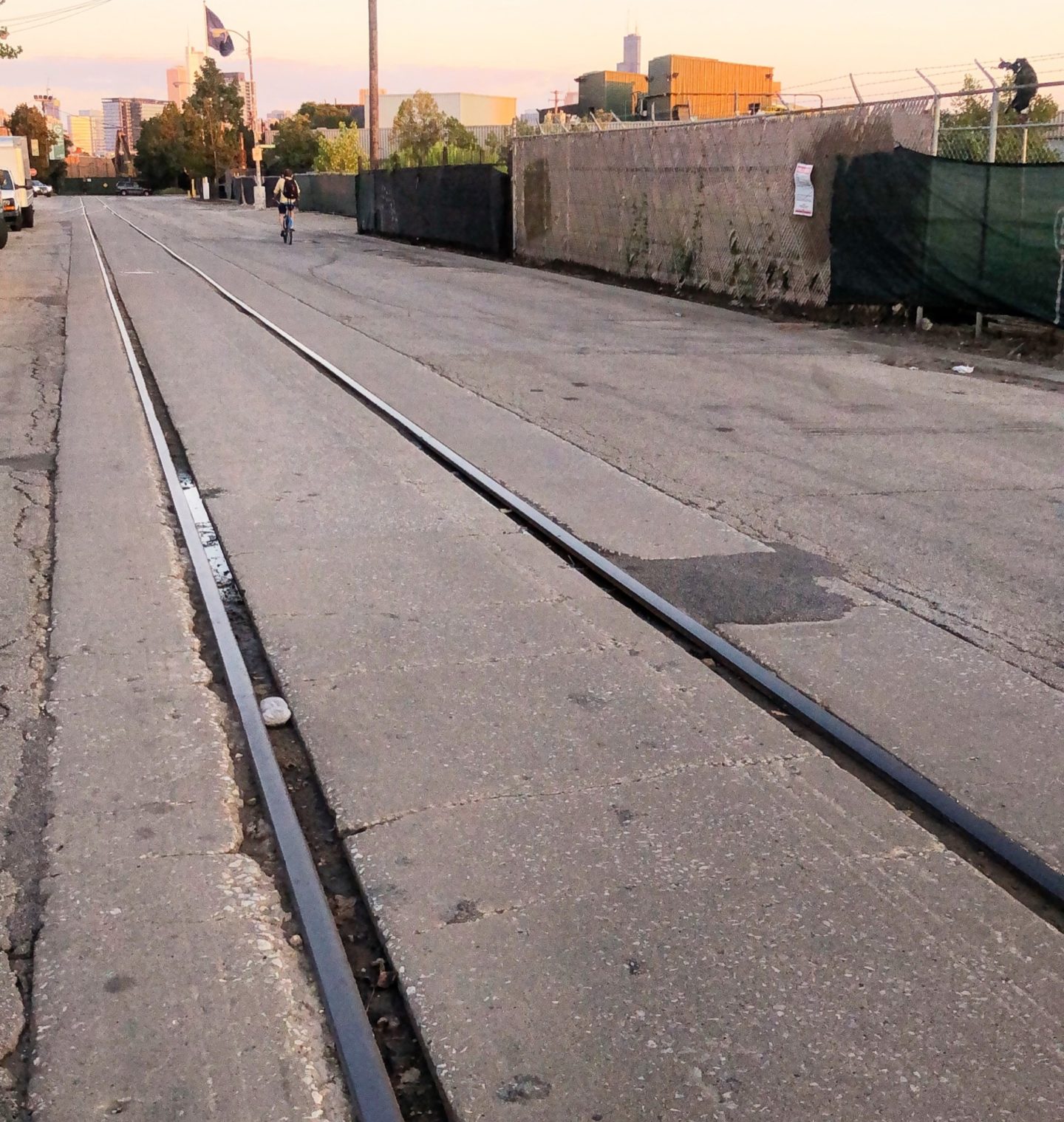 And finally, what would a post about a scooter wreck be without a few wound pics? Look away, if you don’t want to see.

I’m sure some of you will think they’re not bad at all and maybe they aren’t? I’ve definitely seen worse photos of road rash this week as I’ve been reading up about it.  All I can attest to is how they felt/still feel and it’s not very pleasant. I wouldn’t wish it on anyone. 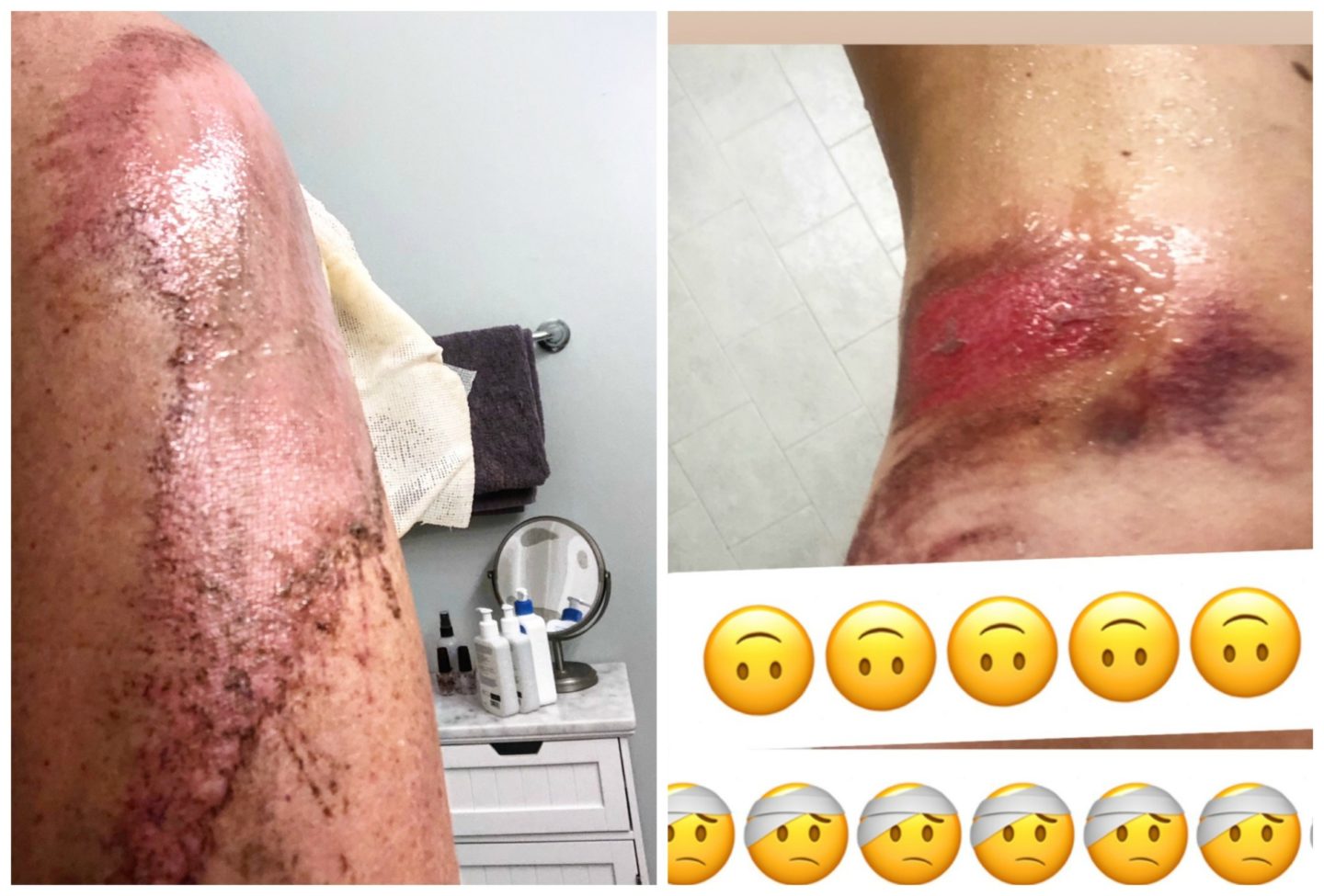 Other than that, it’s been a good week. How was yours?

PS- thank you for all of the texts, messages, and advice on dealing with skin pain. Everything I’ve purchased has come from your recs so I can’t thank you enough. And your sweet words and positive vibes really mean a lot 🙂