Eight years ago in the fall of 2010, Chris and I were living together for the very first time (AHHH sinners!) in Topeka, Kansas. 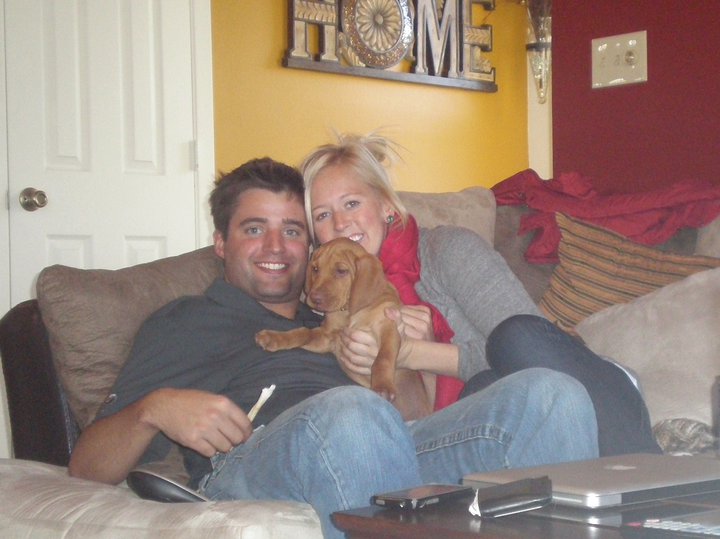 Also, we turned out okay, pre marital living together and all. 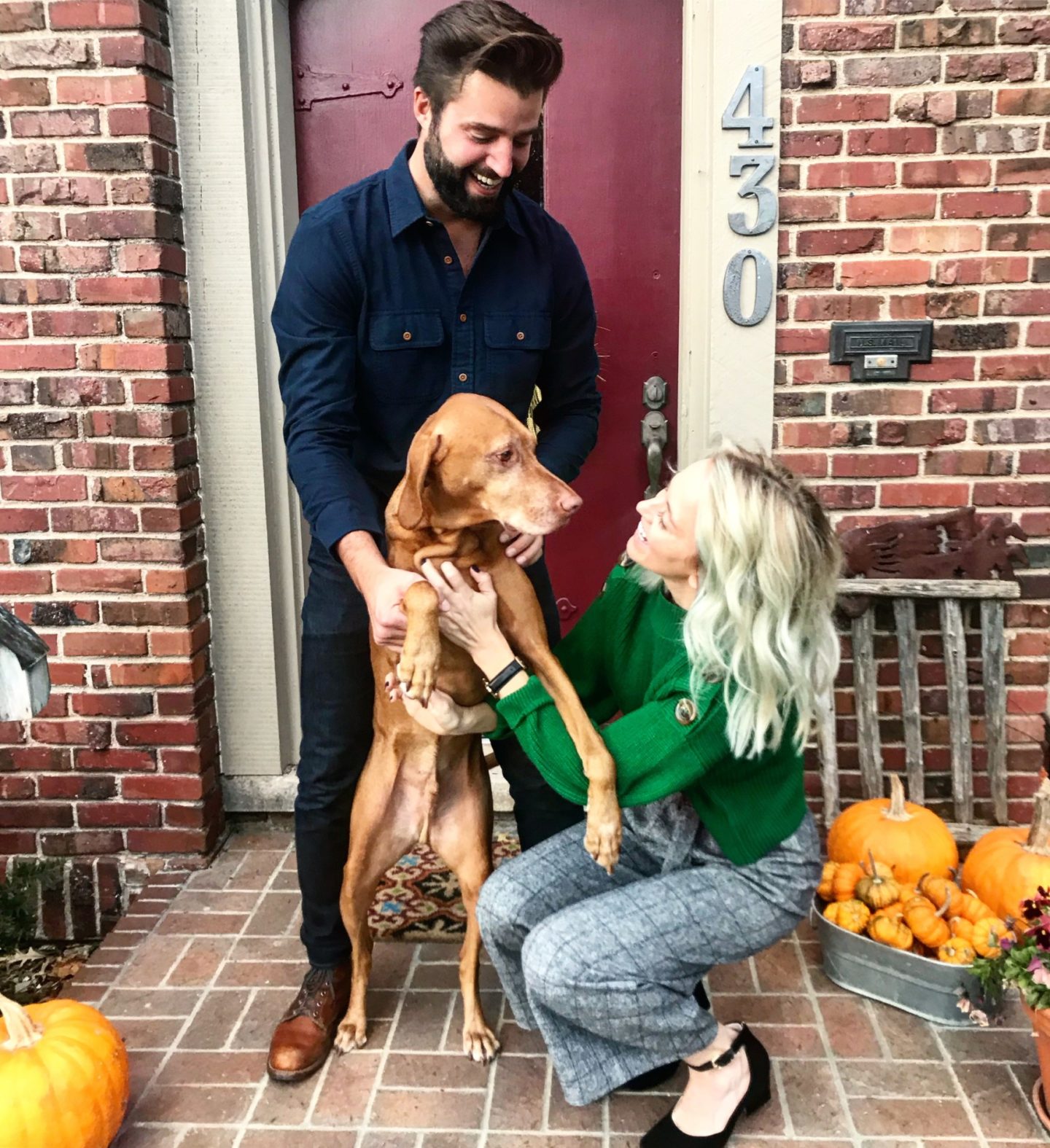 My job was in Kansas City, Chris’s previous internship was in St. Louis and when it was time for the internship to turn into a real job the company considered Topeker to be KC. (They were wrong.) But that is beside the point.

During his first month of work, Chris was working long hours. He’d be in the office by 7 a.m. and home around 7:30 p.m. My hours were a little more flexible (this was back when I dressed like the Iron Chef and wheeled my red cooler and knife kit into a new high school everyday and tried to recruit teenagers to go to culinary school.) I’d leave for work around 6 a.m., but was always home by 2 p.m.

So what does one do in Topeka, Kansas every single day when they have the afternoons off and literally no friends? Nothing. I did a lot of nothing and a lot of sulking.

Out of the blue, (probably because he felt bad for me,) Chris casually said one day, “we should get a dog.”

Know what a guy should never casually say to a lonely girl? “We should get a dog.” Because now, without a doubt, we were getting a dog.

Chris wanted to think on it and do research for hours and days and weeks. I however, knew it was happening that week. Maybe the next day even if I got off work early, which I most likely would because I needed this dog ASAP.

We’re at the point in the story where I wish I could say we went to a shelter and rescued. But if I said this, that means Harlow doesn’t come into my life. So I’m at a crossroads, because on the one hand I feel really bad we didn’t rescue, but on the other, I don’t want to feel bad about Harlow. What I’ll tell you is that eight years ago I was quite different from the person I am currently. I cared about animals, but I didn’t know what I know now. I’m not making excuses here, just being honest.

Chris simply mentioned that he thought Vizslas were “a cool breed” so a Vizsla is what I was after. I didn’t even think about going to a shelter or looking for a Vizsla rescue group. I know guys, it feels weird to say that, especially since I’m always posting about rescue animals. But like I said, young-20s-me compared to me-now are pretty different people. I promote shelters and rescues as much as I do now because I truly believe in them and also because I’m not going to let a decision I made eight years ago prevent me from advocating for pups who need it the most. Lastly, I’m not telling YOU where/how to get a dog, I’m only speaking about my own personal thoughts and beliefs here. To each their own.

Now back to Harlow.

It was around 12:30 on a Thursday afternoon and I was working at a high school in Shawnee Mission, Kansas. I was probably showing off with my knife skills, tossing a butcher knife behind my back with my eyes closed, making jicama salsa, just being the clown chef that I was back then. The bell rang and it was then that teacher decided my fate (or Harlow’s.) She called me over and said, “I forgot to tell you that the next period is cancelled, so you can leave now if you want.”

Why yes Mrs. Kollsworth, that’s exactly what I want.

There was no way in hell I was going back to Topeka to twiddle my thumbs for six hours alone. So instead, I went to get a dog.

I didn’t tell Chris. I didn’t have supplies. And the only thing I knew about Vizslas is that they were known to be an “energetic and high strung breed.” Great, me too.

I drove two hours south to a town called Gridley, Kansas. After getting lost on several country roads, (thank God I printed my MapQuest directions and found my way out) I finally pulled down a long gravel road and as I came to the end I saw what looked like a cloud of red mayhem. Or a herd of pudgy little reddish brown puppies running in circles, biting at each other’s ears, and nipping at the heels of one another.

I got out of my car and met the owner, a nice older man whom I could tell was instantly skeptical me. I would actually have to convince him to let me take a dog home that day because it was evident he cared a lot about his pups and I seemed a bit… well young, dumb and blonde. (A stereotype I hate, but is sometimes true, let’s be honest.)

He showed me the “couch room,” which was a screened in porch area with heating and air conditioning, and several large couches where all seven of the Vizslas he owned could “relax.”

“They need a couch, I’ll just say it,” the man said as he looked me up and down wondering what kind of life I could possibly give a dog.

“And you can never hit or even scold harshly, because these dogs are sensitive, you’ll break their spirit if you do.”

I’ve never forgotten that piece of advice and I’ve taken it to heart. *thus the reason Harlow runs our house… I couldn’t risk breaking his spirit.

We walked back outside and I met Harlow’s mom, Big Nosed Kate, his dad, Doc Hollywood, and his grumpy uncle, Old Mr Toot Toot. (He comes from a family of entertainers.) The dogs had free roam of the farm and I got a really good feeling from the place. When I was asked if there was a certain pup I was interested in, I looked toward the herd and couldn’t help but notice the clumsy one in the back.

He was a little slower than the rest, tripped over his feet more often than the others, and was just all around the most awkward.

It was Harlow. And I had to have him.

“How about that one?” I asked.

And then I bent down and sure enough, Har ran over and toppled on top of me, at which point I noticed he was also the only pup covered in … well dog shit. Nice, Har. Very nice. So now I was covered in dog shit. We were meant to be.

I convinced the man to let me take Harlow by promising to give him the best life ever. “This dog will be my life,” I said, not realizing how true that would actually become.

And then he was mine.

I took this photo the day I brought him home. Due to the great iphone fire of 2010, I only have about ten baby pics total of Harlow and this is one of them. It’s one I cherish. 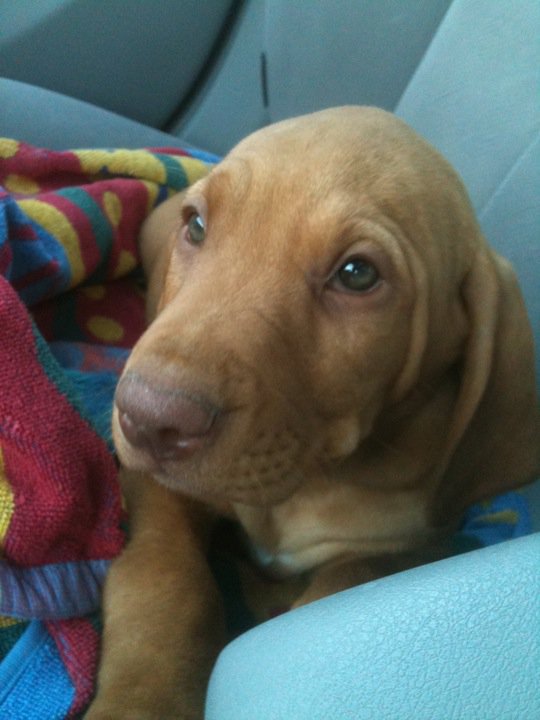 On the way back to Topeka we passed an old country road called Barlow. I thought it said Harlow and loved the name. It was fate! By the time I realized I was wrong I had already decided that seemed like a good name for new my best friend.

“Harlow, we’ll call you Harlow,” and then the sweet little guy you see above peed all over my seat. And then he threw up. And then he shat. He did all three within about two minutes and I remember thinking, what have I just gotten myself into?

At this point, please remember that Chris was just sitting in his office, doing his work like the good professional guy that he is. He had no idea what I was up to, or the new family member I was bringing into our home.

When we got back to Topeka, Harlow and I drove right to the store and picked up everything I thought he may need. Toys, food, bowls, and a crate, because I planned to crate train him at night. (Lol.)

This next part, the part when Chris comes home from work, is one of my favorite memories of all time. I can see and feel it so vividly when I think about it, it’s as if it happened yesterday rather than eight years ago.

Chris walks in, a little tired and defeated from this new job that is killing him, and I’m sitting on the couch with Harlow on my lap. But Chris can’t see him yet because Har is just a little peanut.

Chris tosses his briefcase on the table (because Topeka-Chris had a briefcase and wore a suit everyday) and then he walks around the corner and it’s then that he sees my little surprise. His eyes light up and he no longer looks like a grown man in a business suit, but suddenly Chris is a kid. He’s a little boy who sees a puppy in the room and damn it if tears don’t come to my eyes typing this because it’s a moment I could live in forever.

“Is that dog? Did you get a dog? No way! A dog? You got a dog?” Chris just keeps repeating it, not believing it’s really true.

And then he picks up baby Harlow into his arms and Har nestles under his face, making those cute little puppy moans that a puppy does, and Chris knows it’s real. We got a dog. His name is Harlow and the rest as they say, is history. 🙂

Happy birthday, sweet Har. Thanks for bringing so much joy into our lives. (And new couches, bedding, shoes, ext.)

I’ll end with the very few photos I have of Har from this time. Damn that dumb iphone… Still haunts me eight years later. 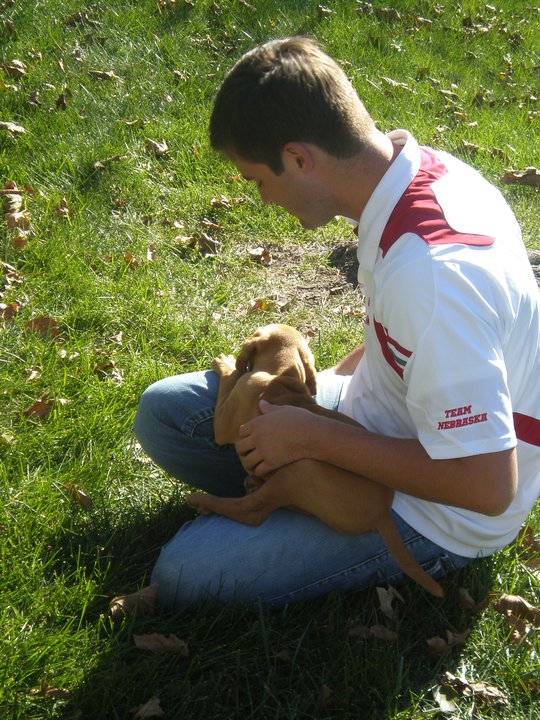 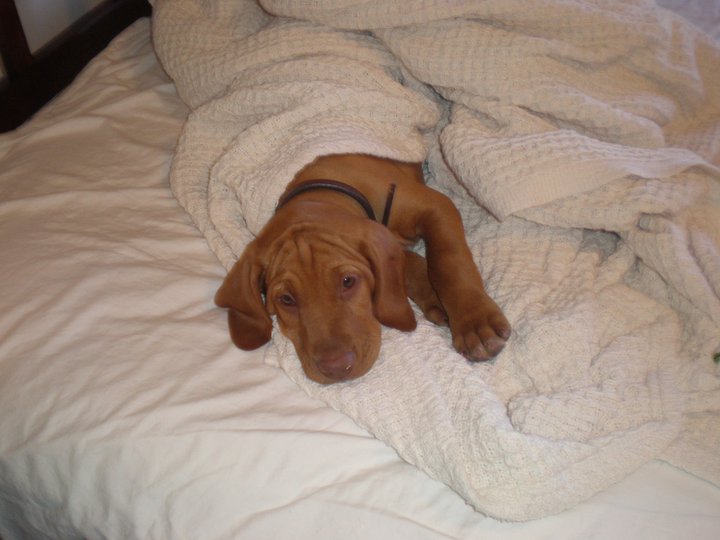 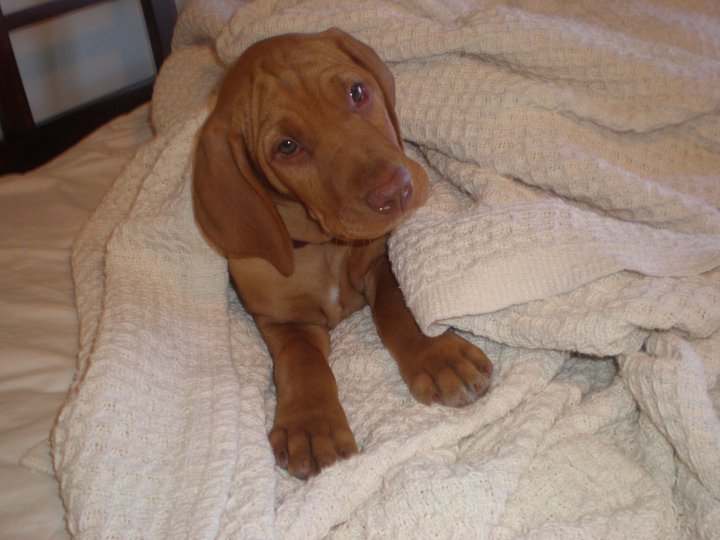 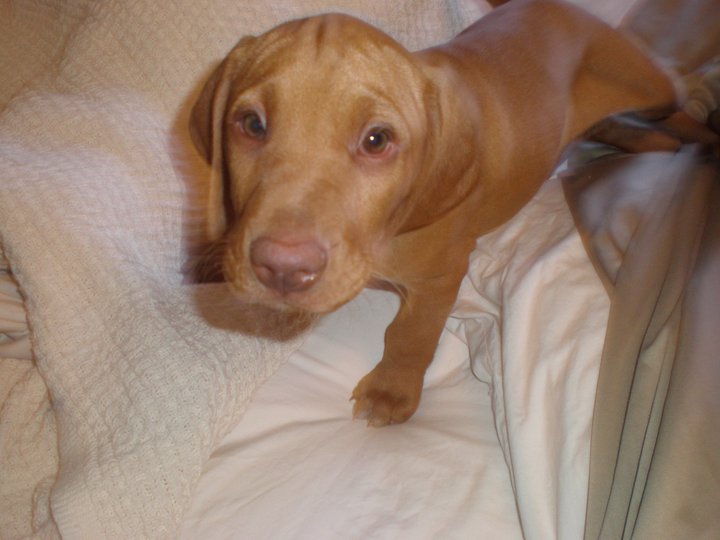 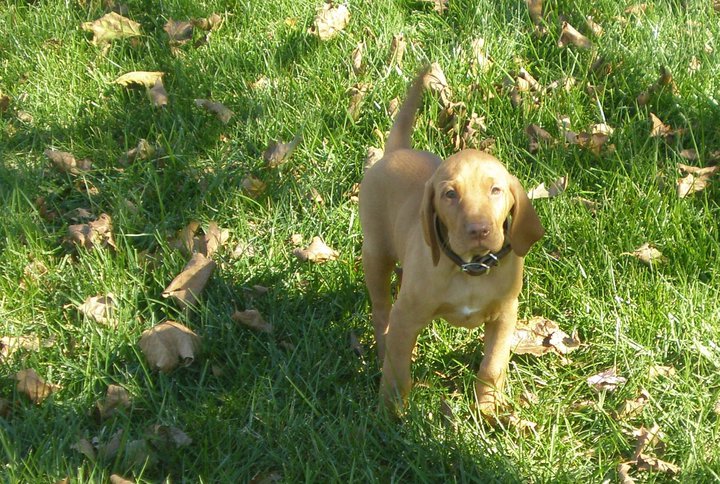