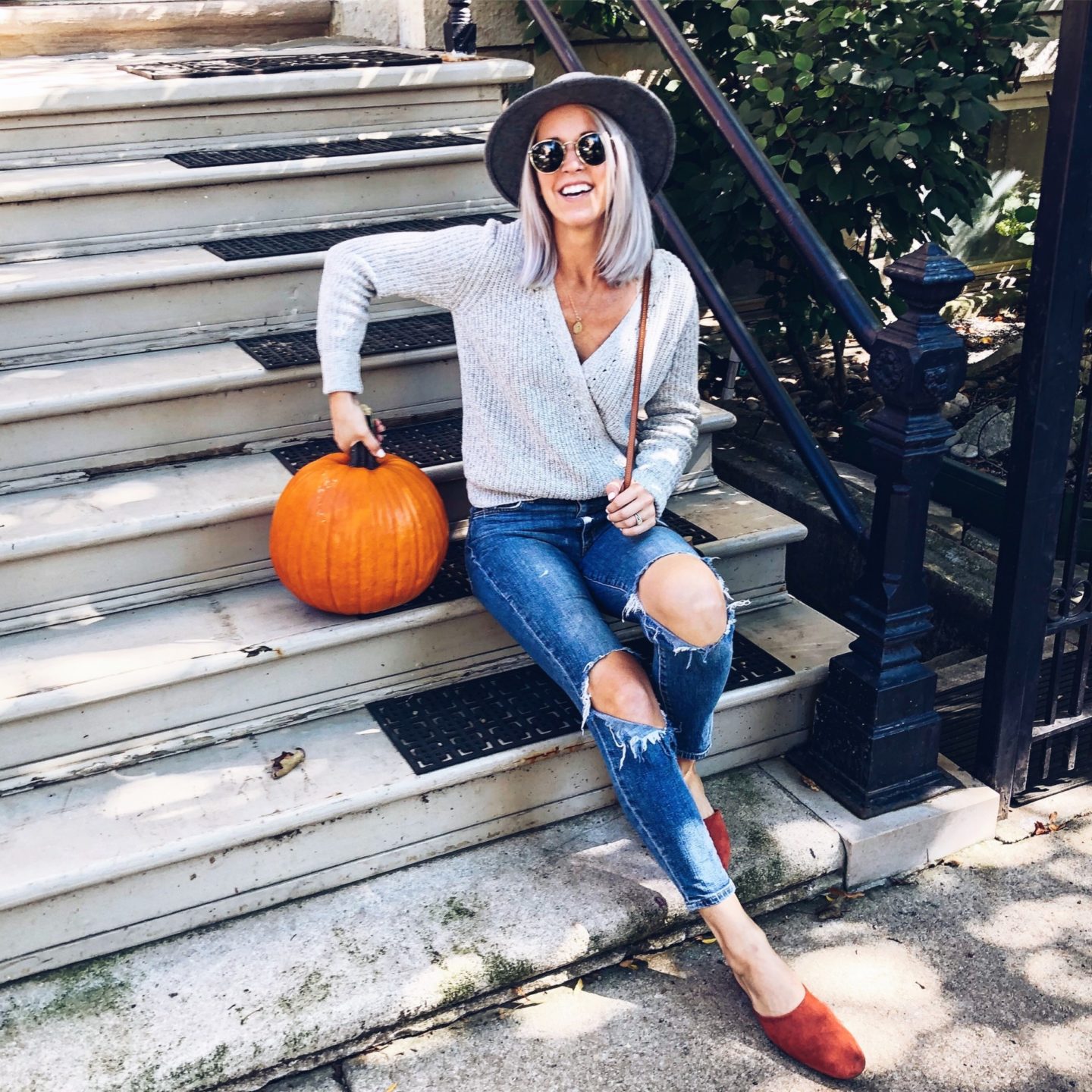 It all started last Sunday.

We were officially one full day into “fall,” and I didn’t have my pumpkin photo yet. As I scrolled Instagram and saw image after image of beautiful blanket-scarfed bloggers at pumpkin patches; sitting on pumpkins, holding pumpkins, eating pumpkins, riding pumpkins, what have you, I started to get itchy.

“I need a pic,” I said to Chris. My famous last words. And the words that probably make him itch, as well.

“Of what?” He asked, playing dumb I assume.

“A pumpkin. It’s fall and I don’t have a pic yet,” the hives on my chin were starting to spread to my neck.

“We’re one day in, you’ll be fine,” he said, knowing I wasn’t listening.

“I need to find a pumpkin.” The hives were getting to my back.

Because I knew that it actually wasn’t “fine” as Chris implied. We as bloggers have a pumpkin pic quota to make every fall and should we come up short, we turn into a pumpkin. I’m jk that would actually be awesome.

If we fall short, it’s rumored that we would lose every single follower we’ve ever acquired through a giveaway ever. Now I have no idea if this is true or not, but I’m not willing to take the risk. So now you understand the urgency.

Who sets the quota you’re wondering? The Mother of Pumpkins blogger, of course. She lives in Dallas. Very fancy. Very into pumpkins. Very into fancy pumpkins.

And before you judge MOP too harshly for setting the bar so high, she does this to challenge us! She said so herself at the Annual Blogger Pumpkin Pic Planning Meeting (or the ABPPPM) the eve before the first day of fall last weekend. I wasn’t in attendance because I wasn’t invited, but I was allowed to skype in which was very generous. Someday I’ll snag that actual invite… Last year the inventor of the PSL spoke at the event, which spoiler… was MOP!

Anyway, this year the quota is 65. From the first day of fall until Thanksgiving, I need to post 65 photos of myself holding a pumpkin, being near a pumpkin, wearing a pumpkin, whatever. The rules aren’t that strict. There just needs to be a pumpkin somewhere in the shot.

So last Sunday when I was already 24 hours behind schedule, it was only natural that I started to get nervous. Fall is a very big season for bloggers. Cardigans. Coffee. Scarves. Plaid blankets. You understand.

As dusk set in and the outdoor blogger lighting was fading, I knew I had to act fast. So I drove to Jewel, bought a pumpkin, and then insisted Chris come walk the neighborhoods with me while I found a stranger’s stoop to leisurely sit on.

If you think this sounds weird, I assure you it’s not. There’s nothing weird about a grown woman doing a pumpkin photo shoot in the middle of the afternoon on a Sunday in front of a home that is not her own simply so she can post it online in the hopes that strangers will enjoy it and hopefully even “LIKE” it.

Nothing. Weird. At. All.

And so that’s what we did. If you can’t tell from the images, it was SO MUCH FUN. Me and pumpkin were bonding and doing all sorts of silly things. 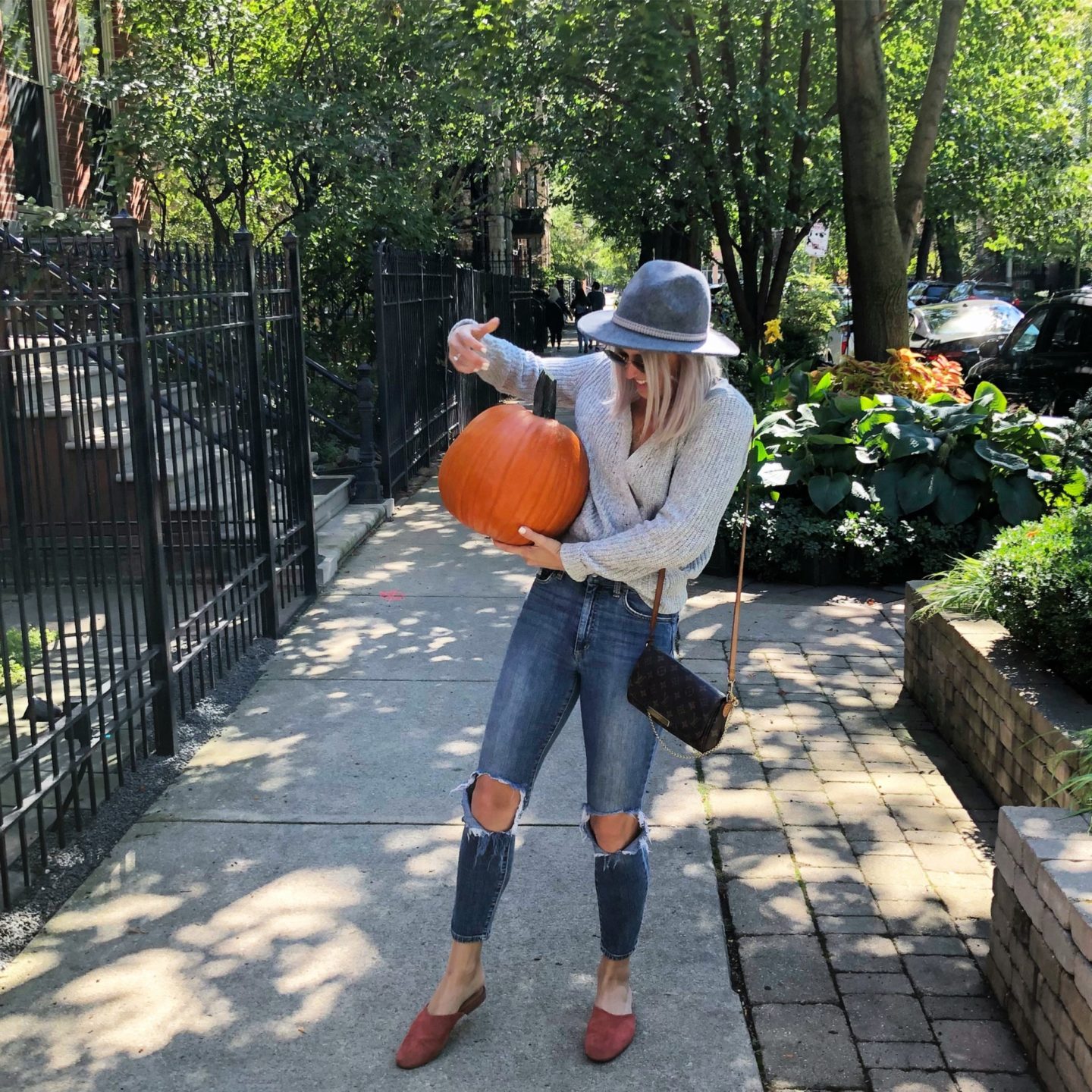 This is when lil pump tried to sock me in the stomach and I was all like, “lol that hurt, you little asshole.”

And then this is when I turned to the side and said, “get a pic of me turning to the side.” 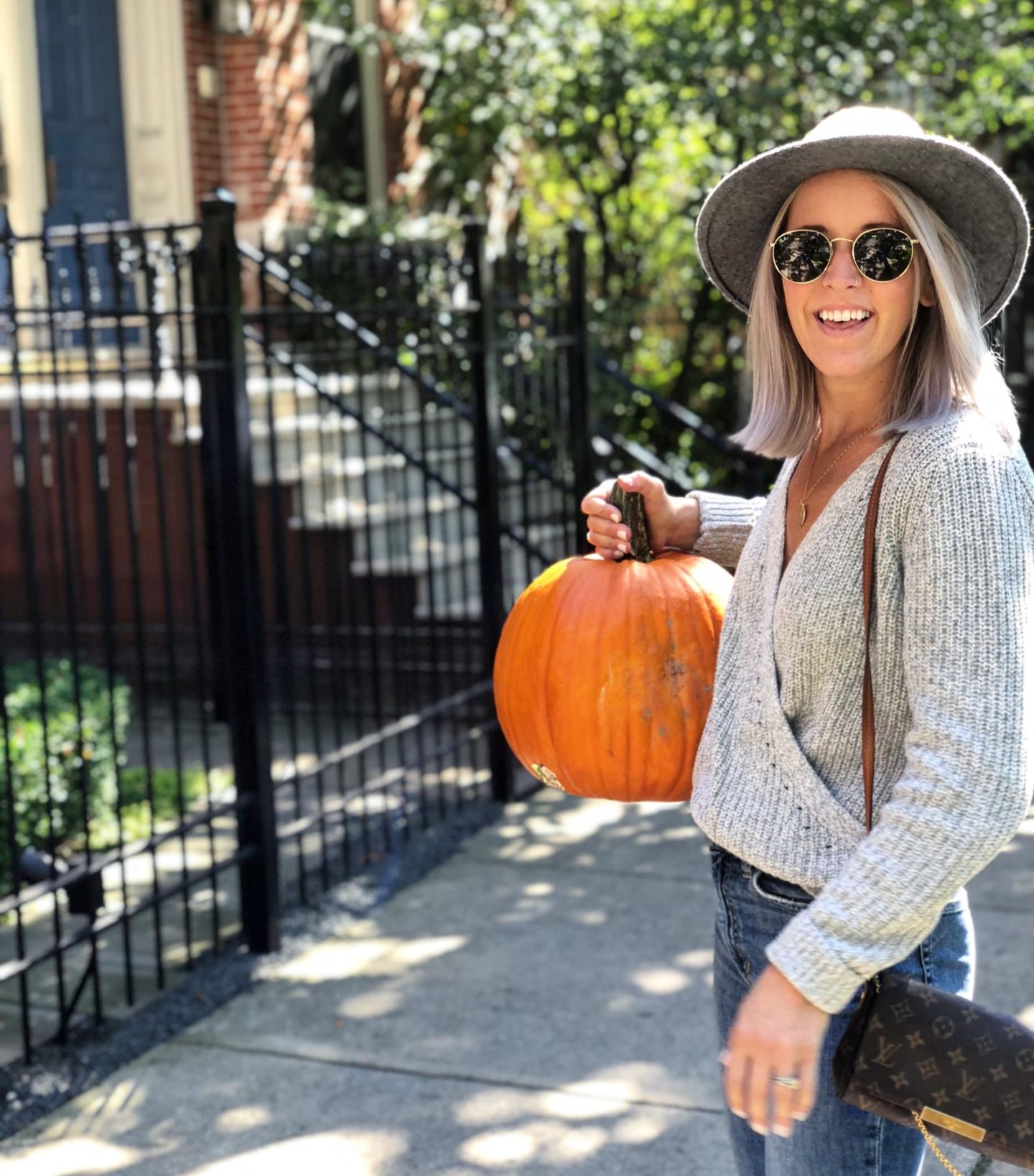 This is another portrait mode of me looking straight on. I like these photos because I think they really show my versatility as a pumpkin model. 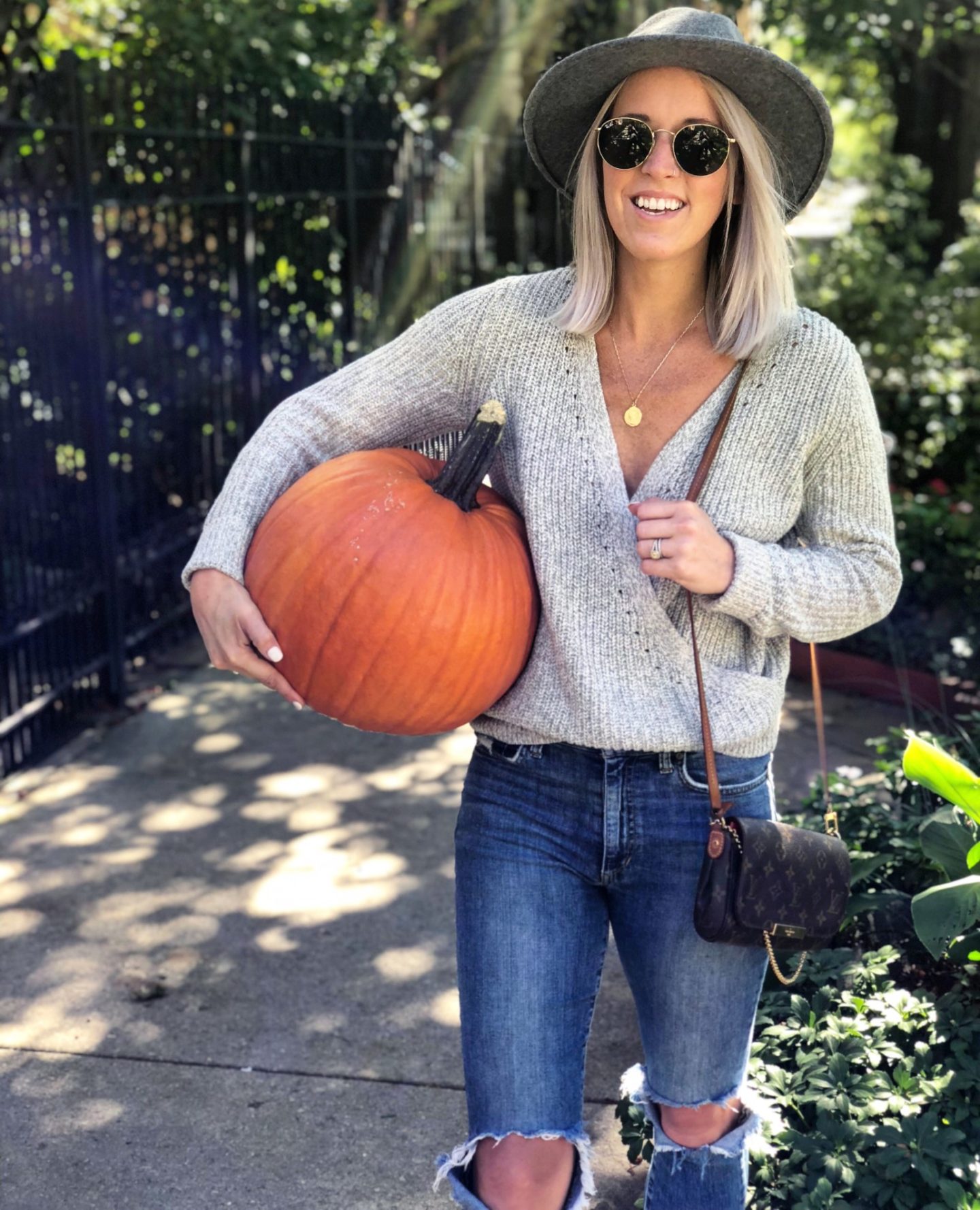 All that said, I’m excited to announce a new course I’m offering called “How To Pose With Pumpkins: 65 Do’s and Don’ts of Posing With Your Favorite Orange Fruit!”

I’ll provide such tips as: DO hold it next to you. But DON’T try to catch it in your mouth like a piece of popcorn.

More details coming soon. In the meantime, please enjoy one more photo of me looking lovingly at my lil pump pump. 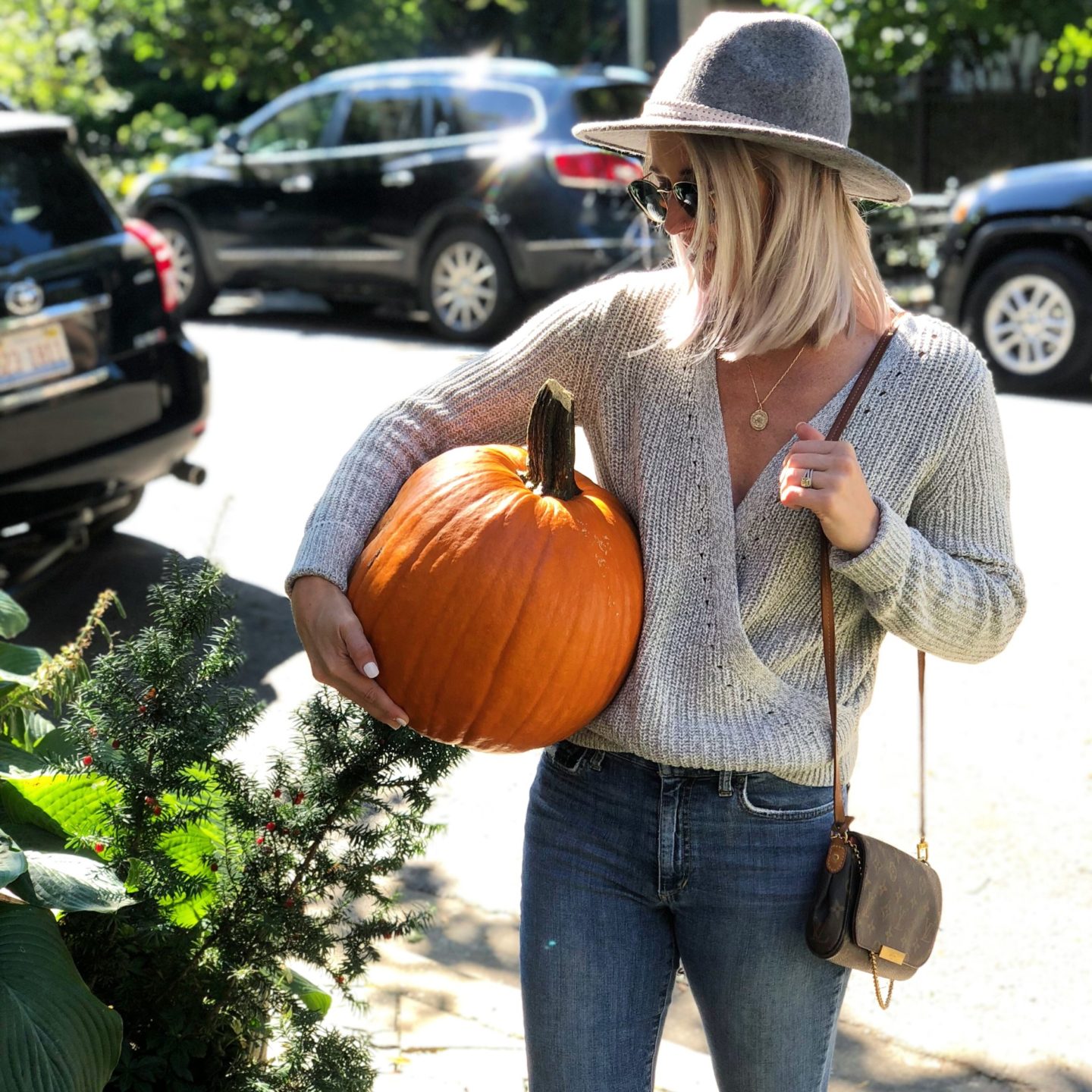 Happy fall everyone!!! Let’s have the best pumpkin season ever! And if you haven’t already, go like all of my photos on Instagram.