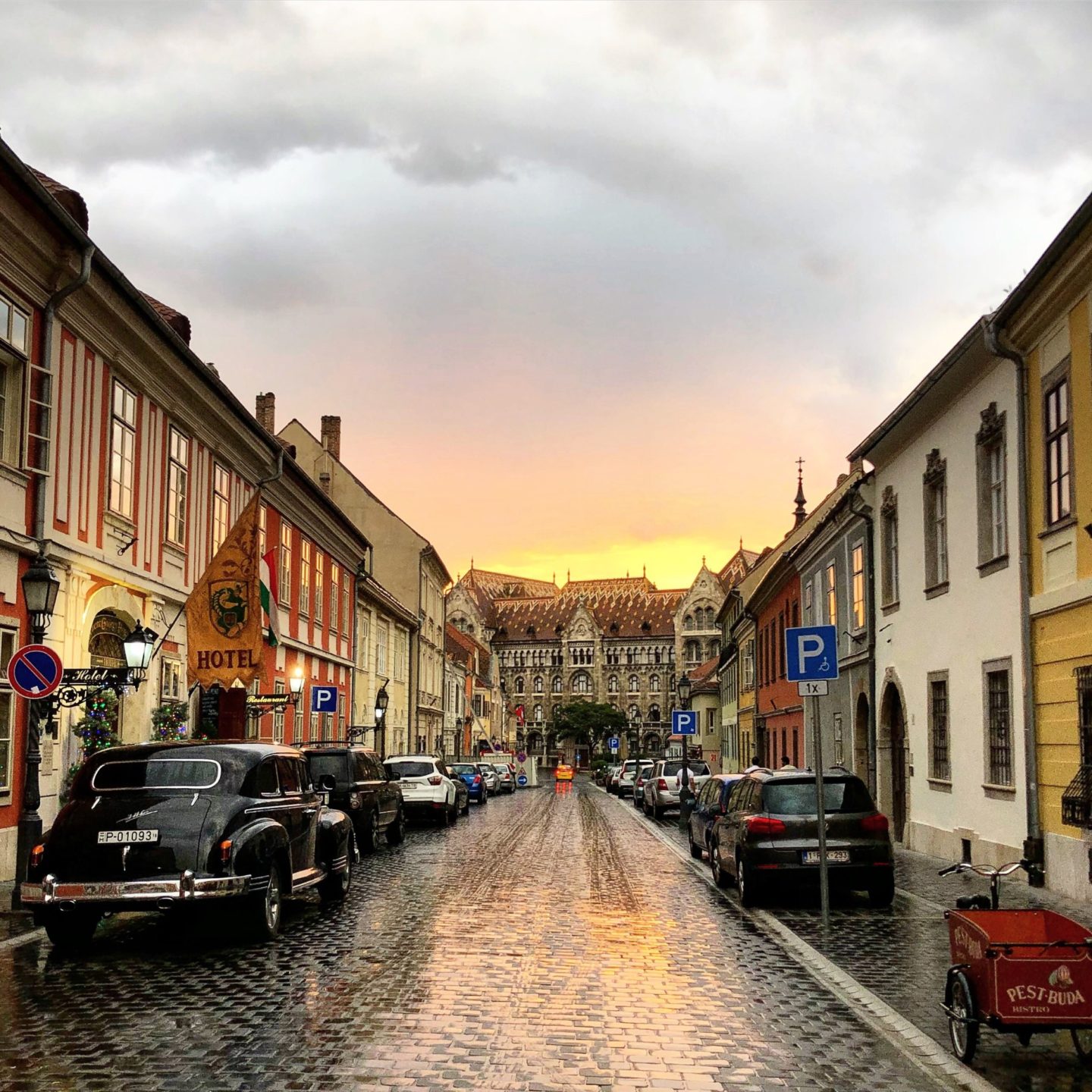 As it turns out, writing a travel recap nearly four weeks after we were at said destination is very difficult for me. But I would feel an immense amount of blogger guilt if I didn’t write a Budapest post because there are thousands of photos just sitting on my phone waiting to be shared with the world! And what am I supposed to do? Just NOT SHARE THEM? No, I wouldn’t. I couldn’t.

And also because Budapest is wonderful and I feel like more people need to know this. Or maybe this isn’t news to you? Maybe I’m just the last to find out. Before going there, the most I knew was that it’s Harlow’s homeland (he’s Hungarian) and George Ezra has a house there.

Once there, I quickly learned:

The food is amazing. Out of Vienna, Prague and Budapest, we by far loved Budapest food the most. We stayed on the Pest side and had the best lunch ever at Balthazar and one of our best dinner’s was eaten at our hotel, Pest Buda. The photo above was taken one step outside of our hotel. 🙂

The nightlife is insane. Way too insane for my old tired bones, but the kids (twenty year olds) really seemed to enjoy it. We took a night cruise on the Danube (which was actually more like a rager-club-party-cruise) and even though I was wildly uncomfortable for most of it, I could still appreciate the fun being had by others. I would suggest a night cruise down the Danube, just not the specific one we were on.

I would also suggest heading to the Ruin Pubs, which are exactly what they sound like. Pubs set in crumbling old (ruined) buildings. This post describes them better than I ever could.

Margaret Island is an absolute dream. We watched a water fountain show (cooler than it sounds, I swear. I had no idea dancing water could make me tear up… but there I was.) Then we rented bikes and rode around the beautiful island, stopped for drinks on the river, and made friends with new Vizslas. Ahhh it was so much fun! I hate to be cliche, but TAKE ME BACK. 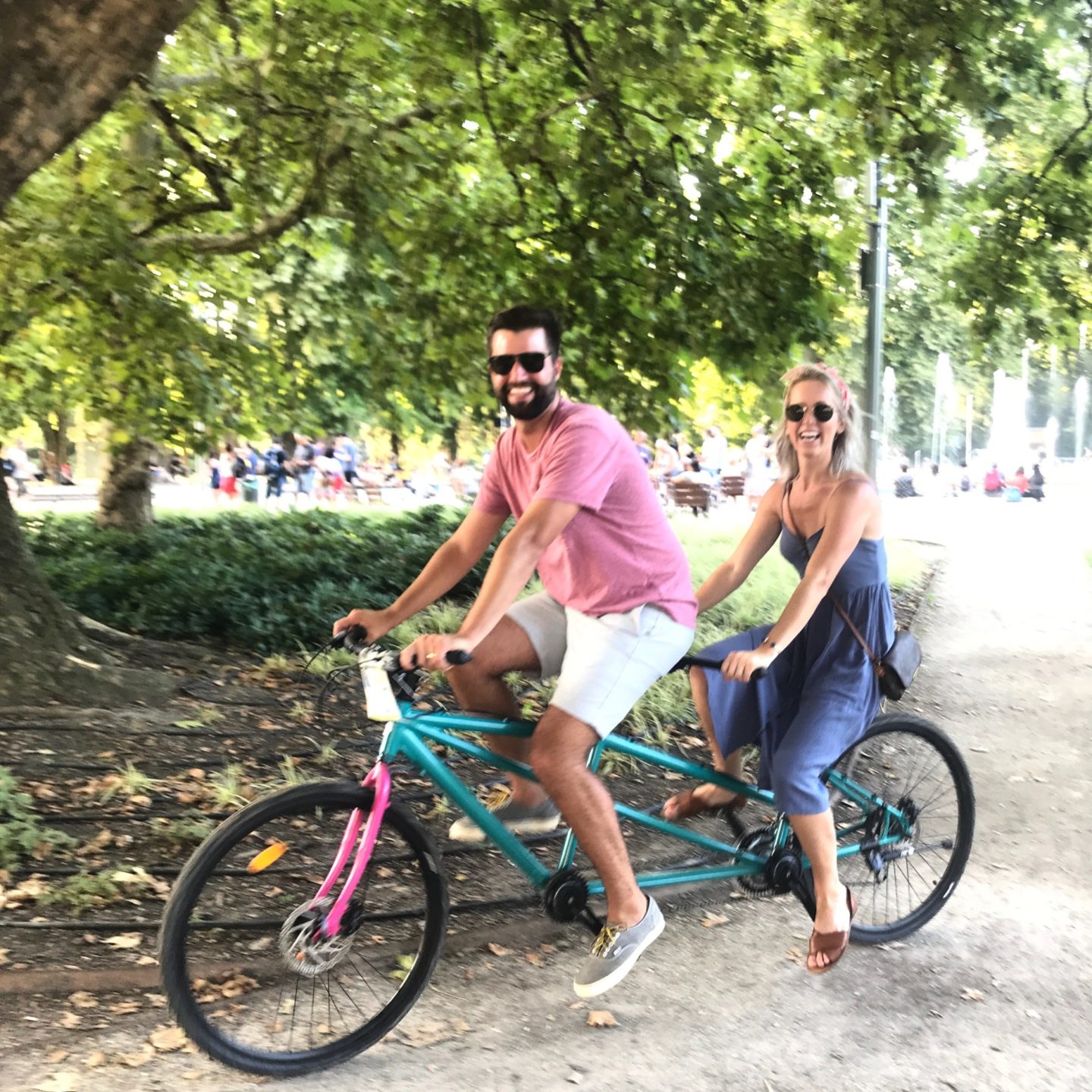 Oh yes, did I mention we met up with Helene there?! So when I say “we,” I mean Chris and I, and Helene and her husband, Michael. I was able to see the famous travel blogger do her travel blogger thing in person.  The first night at dinner, she asked what we’d like to do and see for the next few days and I was like, “totally, I have a few notes.”

My “notes,” (and I kid you not) were on my phone notepad and said,

And then Helene pulled out two pages of very detailed, very well researched, notes she and Michael had made.

But did you see my notes, Helene?

And that is why she is a professional travel blogger, my friends. 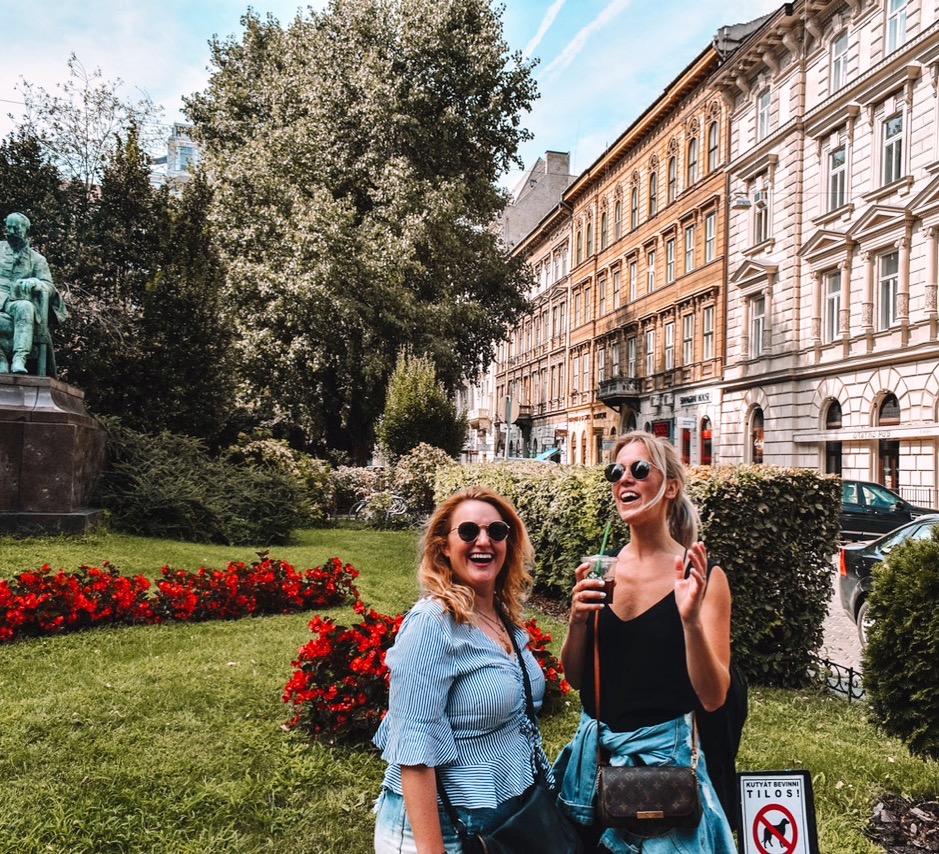 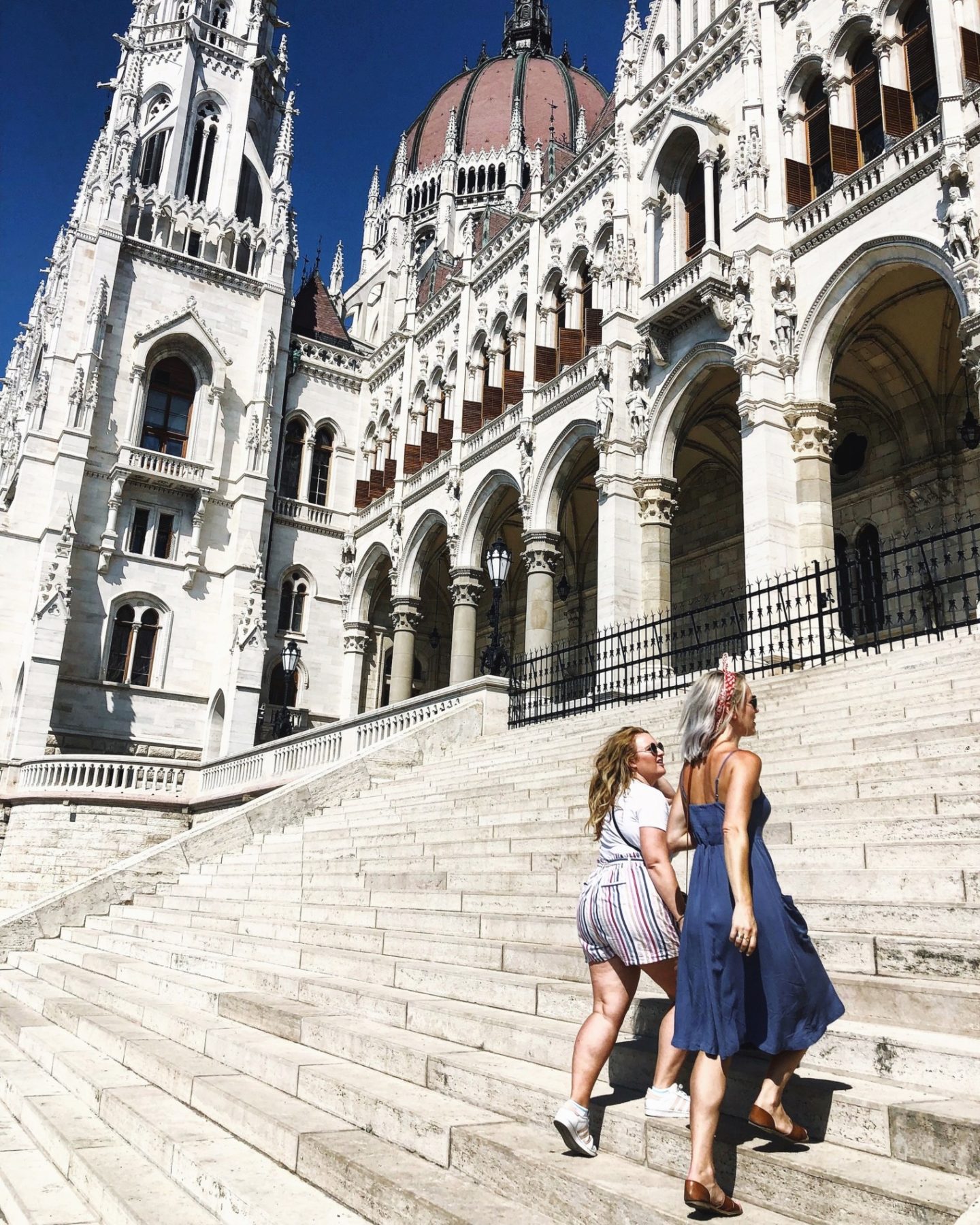 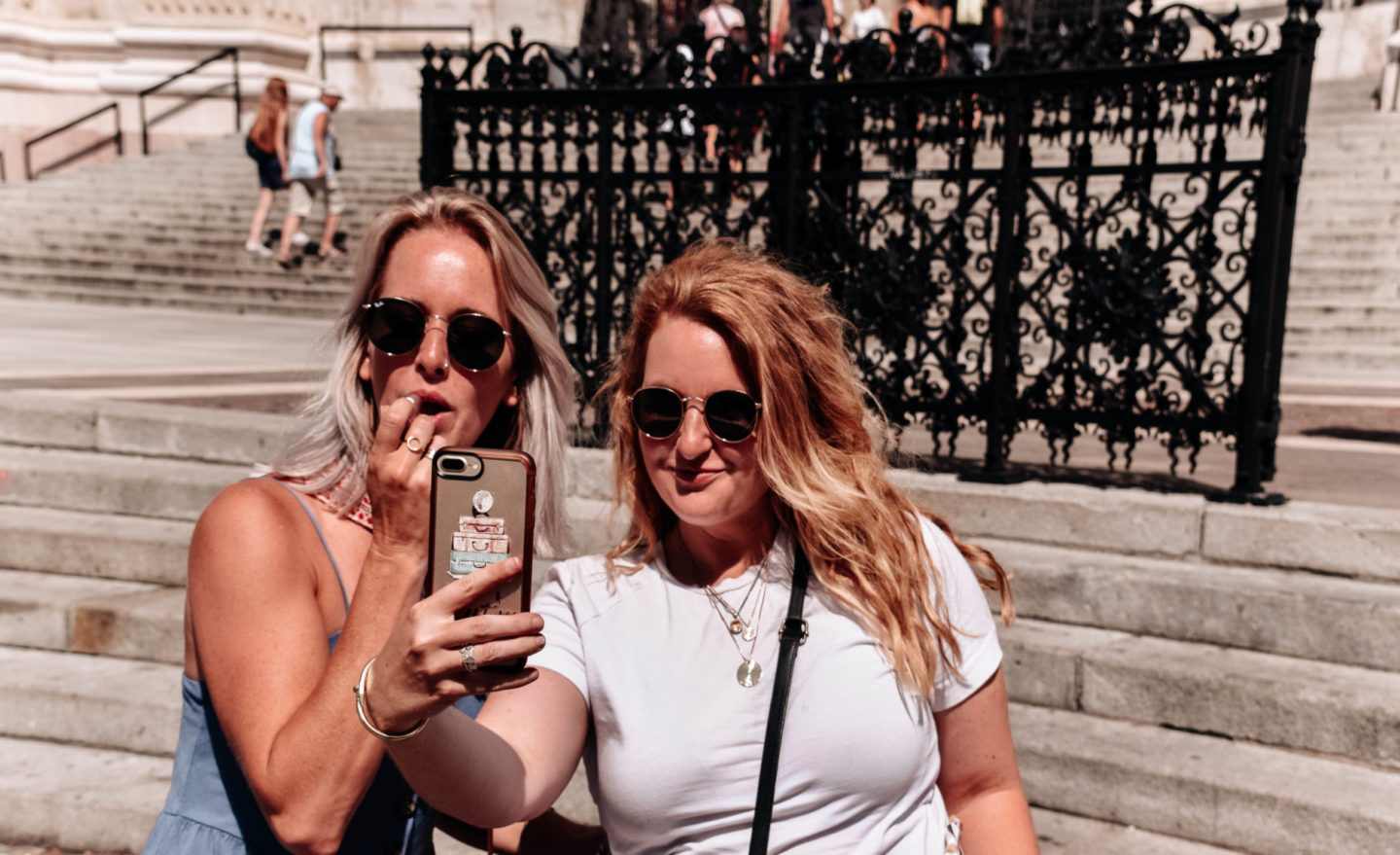 It’s fun to see a city with people who travel for a living because they’re pretty damn good at it. We saw all of the sights, ate all of the delicious food, had far too much fun at the pubs, (and took about a million annoying blog pics as shown above.)

On the first day together with our new travel partners, we ventured to the baths. And those were something else… On the outside it looks like a couple of fancy pools, but when you walk into the actual bath houses, you’ll see it’s so much more. It’s rooms and rooms of BATHS. Big baths, small baths, man baths, woman baths, sauna baths, bath baths, beer baths, the list goes on and on.

We went to the most popular bath, Széchenyi thermal bath, because we were tourists so it made the most sense.

“The Széchenyi Baths are one of the largest bathing complexes in all Europe, and the only “old” medicinal baths to be found in the Pest side of the city.” (taken from Google.) 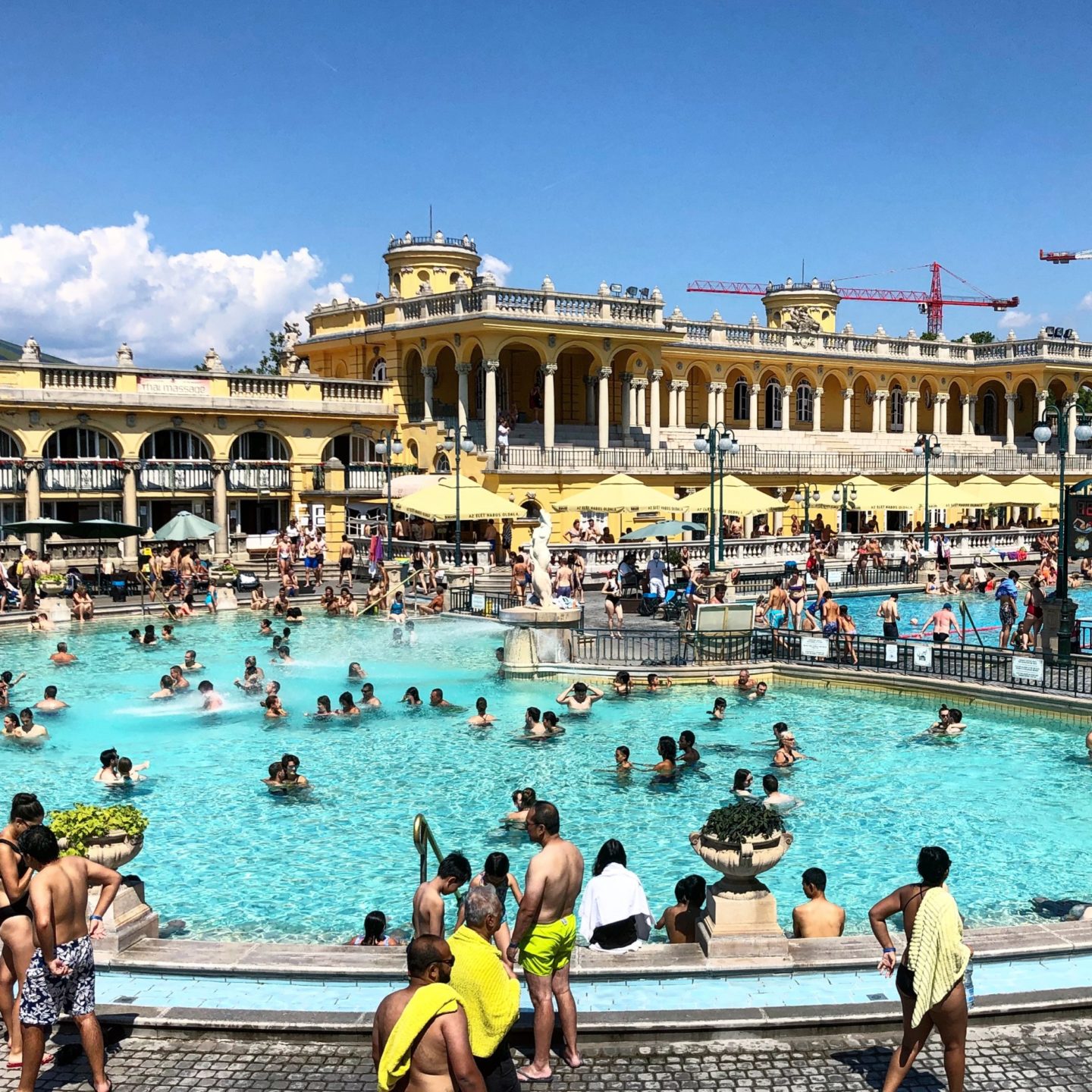 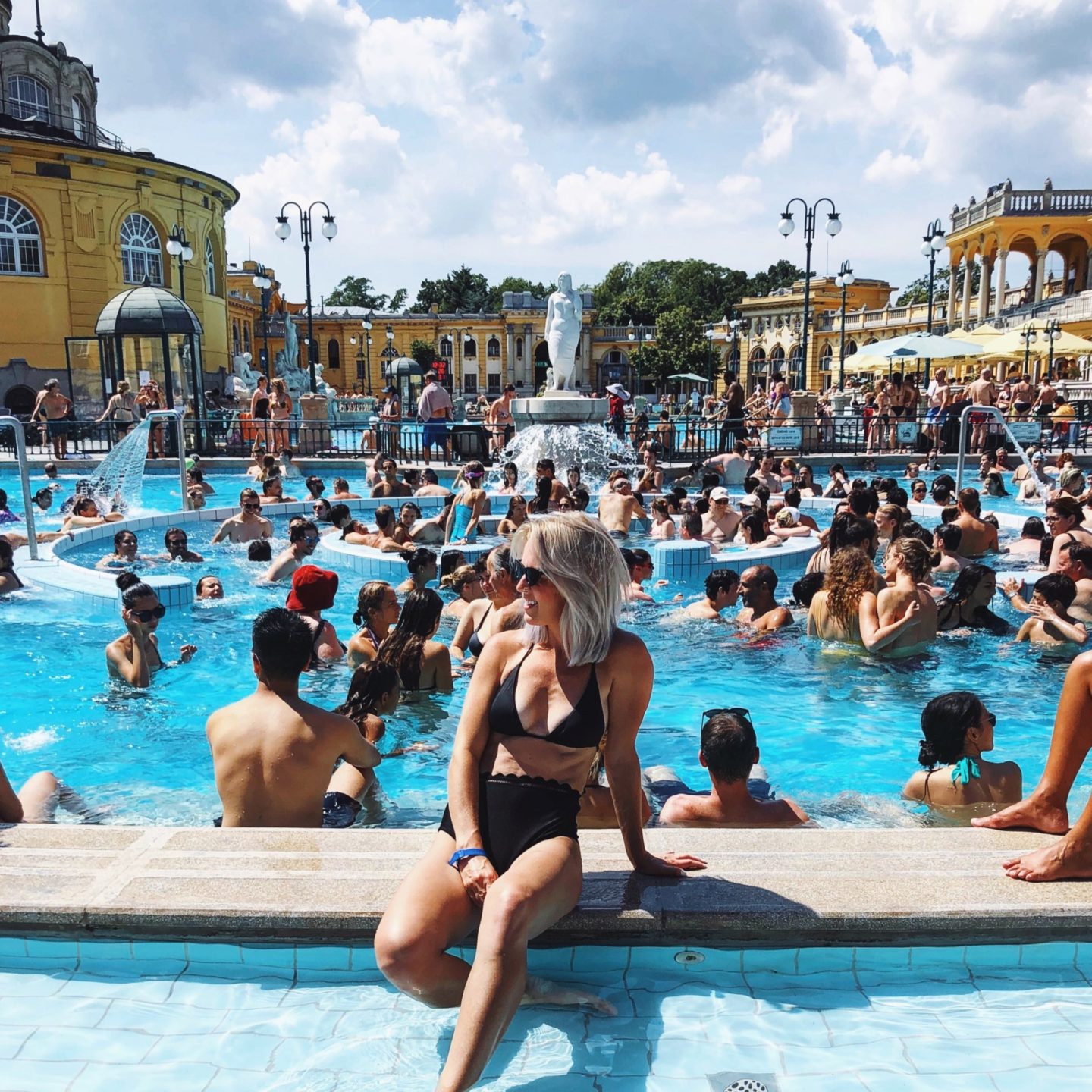 Chris reminds me of Clark Griswold here. Anyone else see it?

Have I sold you on Budapest yet? How about if I told you that it’s super affordable and even our best meal didn’t come close to what we pay in Chicago. And then there’s the whole gorgeous buildings, scenery, history, great people ext… 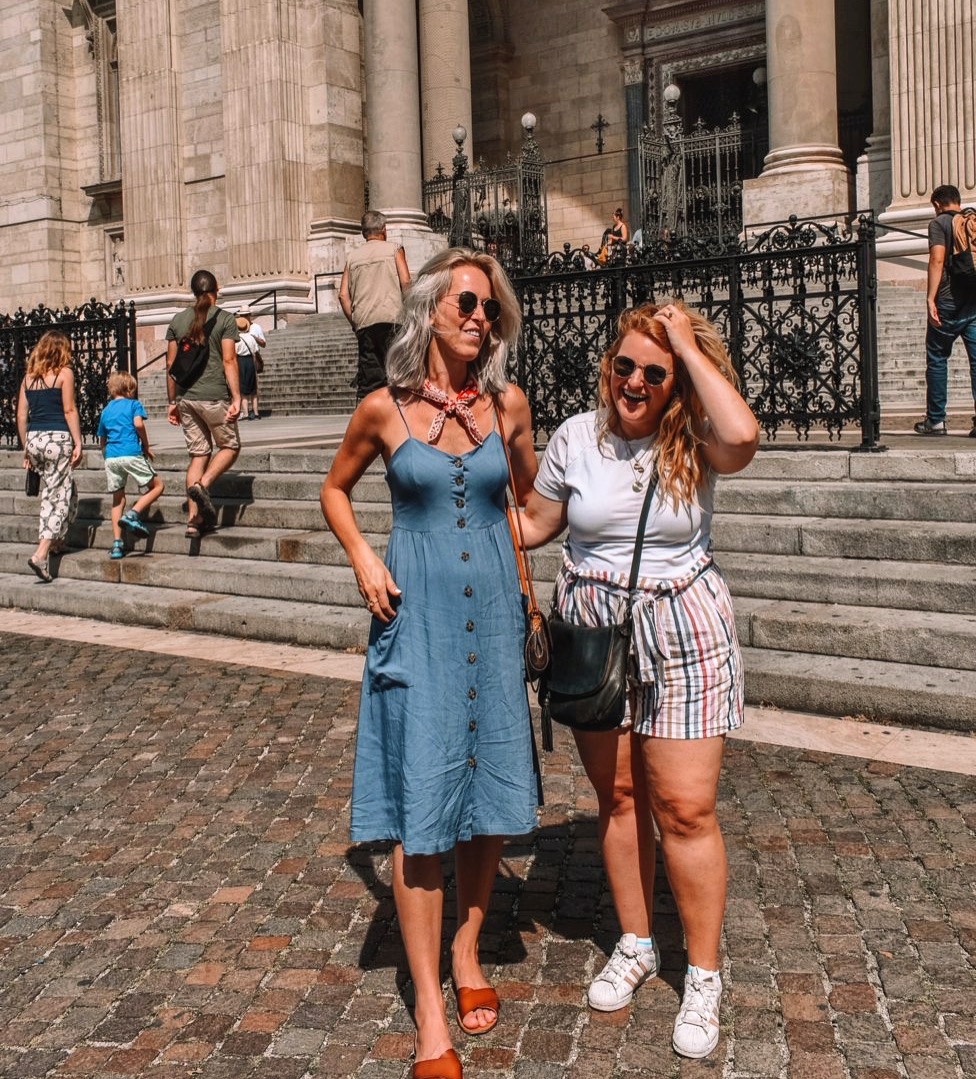 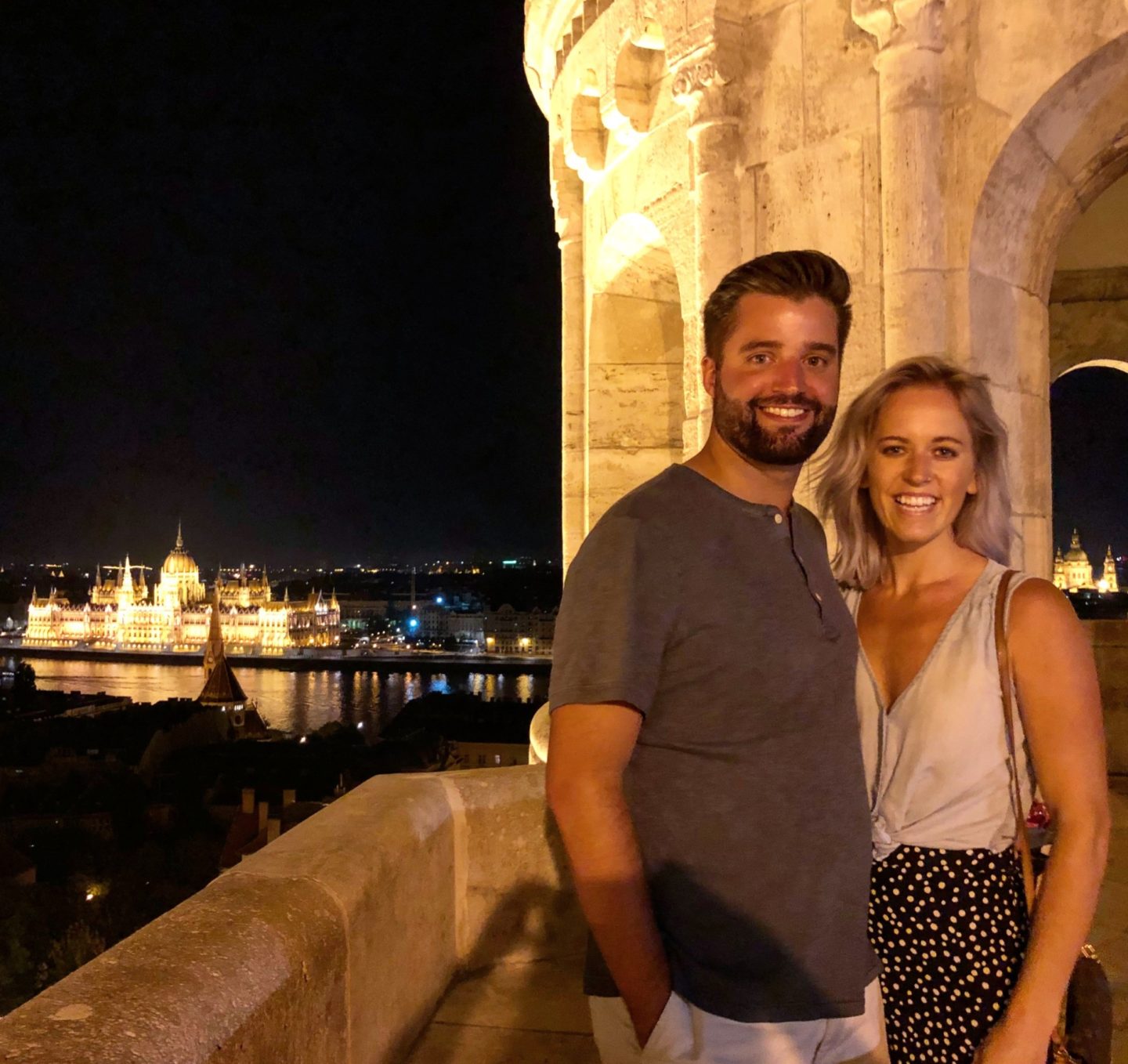 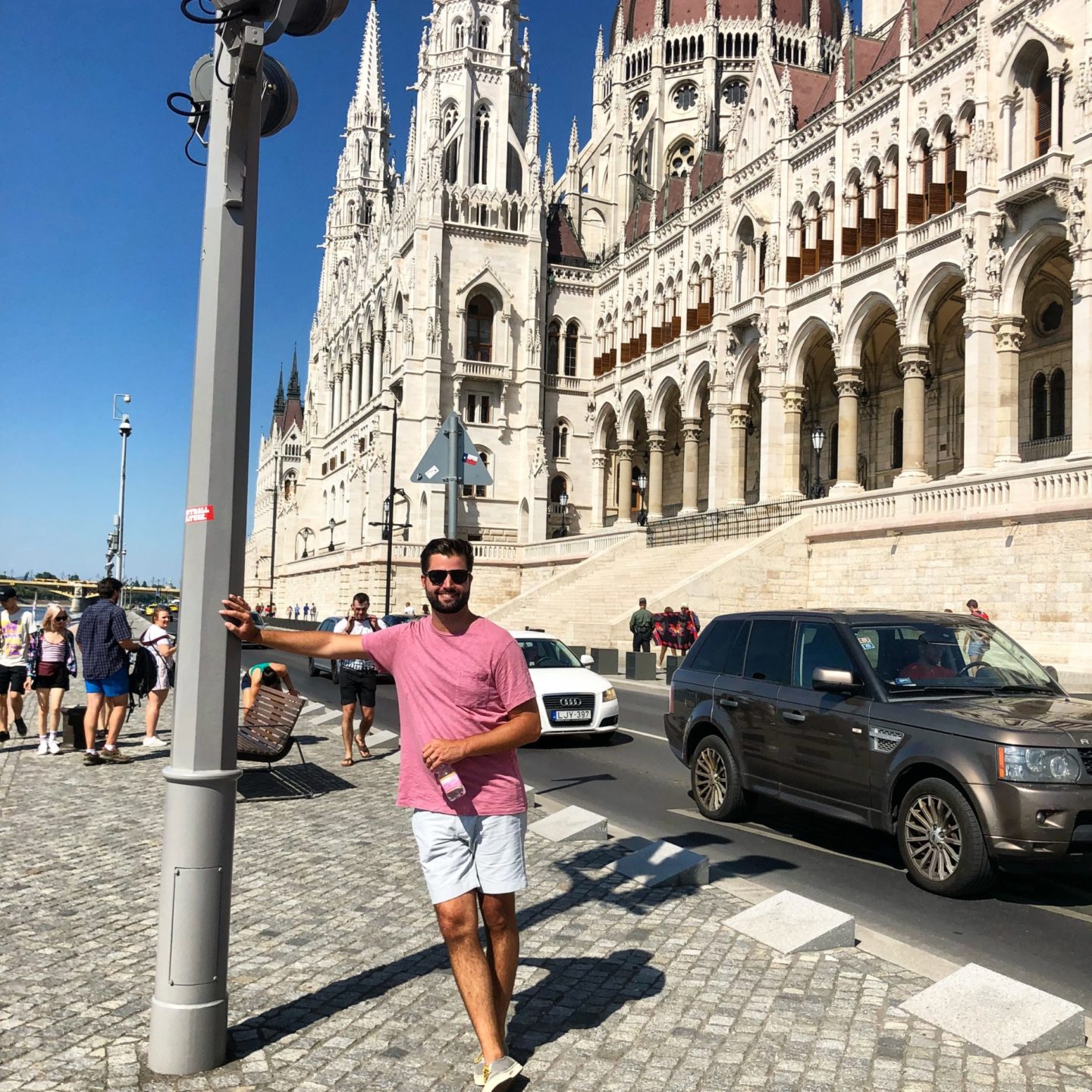 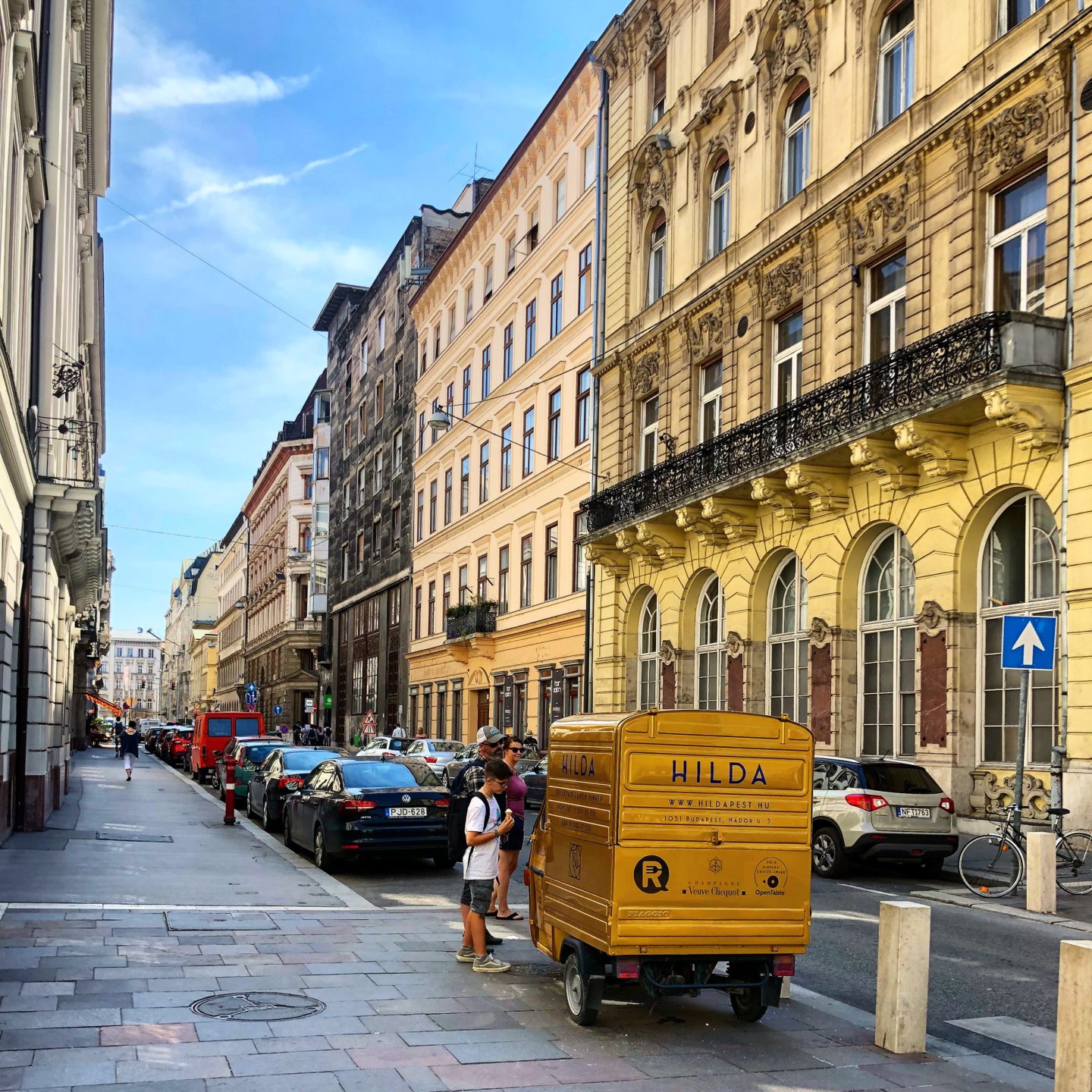 And that’s my hot take on Budapest. Have any questions? Let me know!

Next up: PRAGUE! Coming in six months. Or tomorrow? Who knows? I’m a roll now!