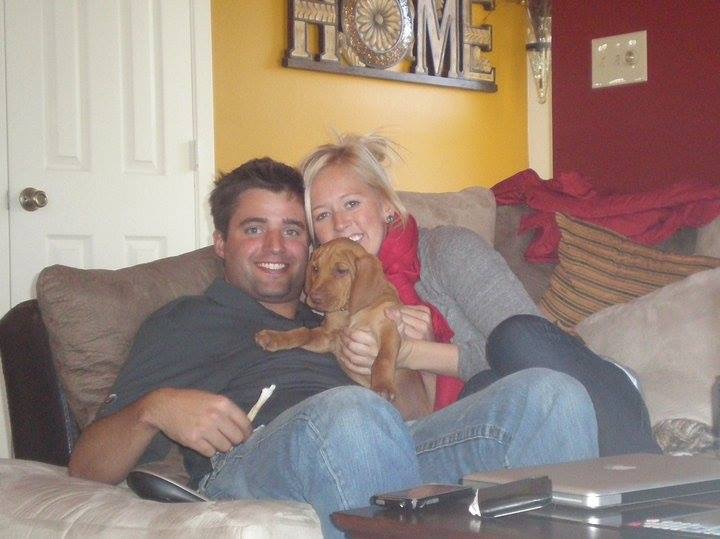 It’s a few days before Valentine’s Day, eight years ago in Topeka, Kansas.

Chris and I are sitting at Outback. It wasn’t our first dinner choice, but Red Lobster’s parking lot was already full.

“I’m excited for the blooming onion,” he says. “I’ve never had one before.”

“Me neither. Should be fun,” I respond.

And then Chris drinks his beer and I sip my wine and we both try not to think about the fact that neither of us want to be here.

“So what do you have going on tomorrow?” he asks to fill the space.

“Well I have to work early in Kansas City, will probably be home by noon, and then maybe I’ll eat blooming onion leftovers for lunch.”

At this point we’ve been living in Topeka for just about six months. Chris got a job there because of me. Well kind of. Before Peker, I lived in Kansas City and he was in St. Louis. He told the financial company that he was working for at the time that he’d like to be placed in the “Kansas City area,” because that’s where I was located.

So they placed him in Topeka. But it was a “very good opportunity” and “he’d be a fool not to accept it.”  As long as he worked hard (which he would, because he’s Chris) and remained persistent, he’d be doing “very well” in no time. So we accepted it.

Before I go any further, if you live in Topeka and are wondering what the hell is so wrong with it, let me stop you and say nothing! I am from a small town in Nebraska, so is Chris, and our families both still live in the places we grew up. So we are by no means “above” small towns.

Topeka was simply not the right place for us at the time.

We were in our young twenties, had zero friends or family around, and every time we attempted to “go out,” townies tried to start shit with Chris. If you haven’t gathered by now, Chris is basically a pacifist. He’s a very likable gent who doesn’t engage in confrontation. Most times he won’t even get mad when someone baits him into it, he’ll just politely turn around or simply walk away. Whereas I would be foaming at the mouth, breaking pool sticks over my knees, screaming ‘LET’S SEE WHAT YOU GOT’ every time this kind of crap happened because it drove me nuts.

So like I said, it wasn’t the best place for us.

The waitress walks over with a hot plate of crunchy onions, “Happy Valentines Day! A blooming onion for a blooming romance.”

Chris and I smile and say thank you. Does she say that to everyone, I wonder? Or just the couples who look miserable?

“If you order another tonight it’s half off. A Valentines Day special!” she adds with an untimely wink and sets the plate down in front of us.

I stare at the fried brown vegetable sitting in a pool of grease and remorse and its fingers are curled upward like an old witch’s hand clutching a crystal ball, but tonight the crystal ball happens to be orange mayo dipping sauce, and if I look closely enough I can see my future laid out before me.

And it’s a future where Chris and I don’t see each other a lot because he’s always working long hours. But not to worry, we’ll marry pretty quick and start popping out kids right after. I see big cars and an even bigger house. And what kind of an idiot would complain about that, right? The kind of idiot who doesn’t dream of that… Because I also see me always wondering what life would have been if we didn’t settle for the safe route. What if we had moved to a bigger city like we always talked about? What if we walked away from that “great opportunity” because even though we knew it was great for some, that didn’t mean it was great for us. What if it’s 2019 and we’re sitting at Outback for Valentines Day barely speaking because we don’t even know each other anymore and because we’re both dreaming about being somewhere else… WHAT IF.

“We gotta leave,” I suddenly blurt.

“But we just got the blooming onion.”

“I don’t mean this restaurant, I mean this place. We need to move, this isn’t the life for us, I can feel it.”

And I know what’s coming next.

“Let’s just stick it out a little longer, I’ve been given a really good opportunity here,” Chris says, just like I knew he would.

Where I tend to fly by the seat of my pants and let my emotions make decisions, Chris is more logical and likes to see things through. Even though he’s also miserable and working much longer days than me, he knows he has to at least give it a shot.

“We need to give it more time.”

“We both know this isn’t where we want to live forever. This was never in the cards. And the more time you spend building your business, the less likely we’ll be to leave.”

Every bone in my body is telling me things won’t pan out well for us if we stay. But what if Chris is thinking the opposite?

The waitress returns, “Want to take me up on that half off offer? They’re going fast! Most popular appetizer we got.”

Chris thinks for a second.

“I actually think we’re going to try something different now,” he says. “But it was a good starter, I can see why it’s recommended.”

Or maybe he didn’t say that exactly, but for the sake of this post let’s pretend he did.

We left behind a house, a yard, a garage and stability. Chris left that great opportunity (and would continue to get slack about it for years to come from friends and family who thought he was crazy for doing so…) But I think deep down he knew it was never going to be our ‘one great opportunity.’ Being able to afford a big fancy house is cool and all, but if you’re not happy living in that fancy house, what’s it matter?

We sold the car we’d just bought six months previous and we moved into the basement of an old building. We took pay cuts and public commutes. We started back from scratch. It was hard and annoying and nothing about transitioning to city life came easy. But it was so so worth it.

I’m not sure what we’re doing for Valentine’s Day tomorrow, it probably won’t involve a blooming onion, but if it does I wouldn’t hate it. 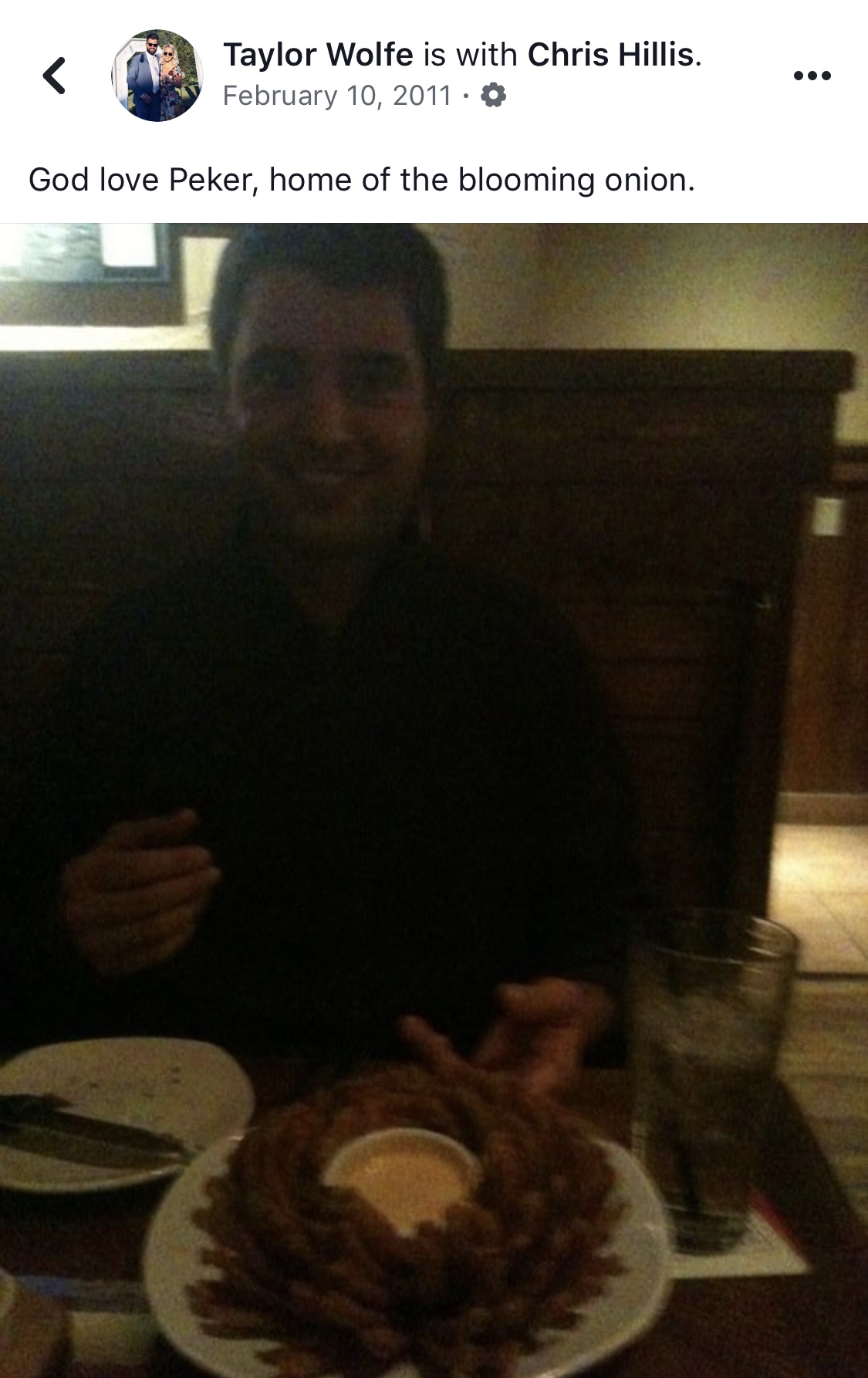 I guess if there’s anything I learned from all of this it’s that you should listen to your gut, or your internal compass. It usually tends to lead you exactly where you’re supposed to be.