What you’re about to read is a tale of one of the best Chicago Christmas weekend’s ever. EVER! So if you like Christmas and you like Chicago, (I don’t mean to sound brazen, but…) you honestly might want to take some notes. 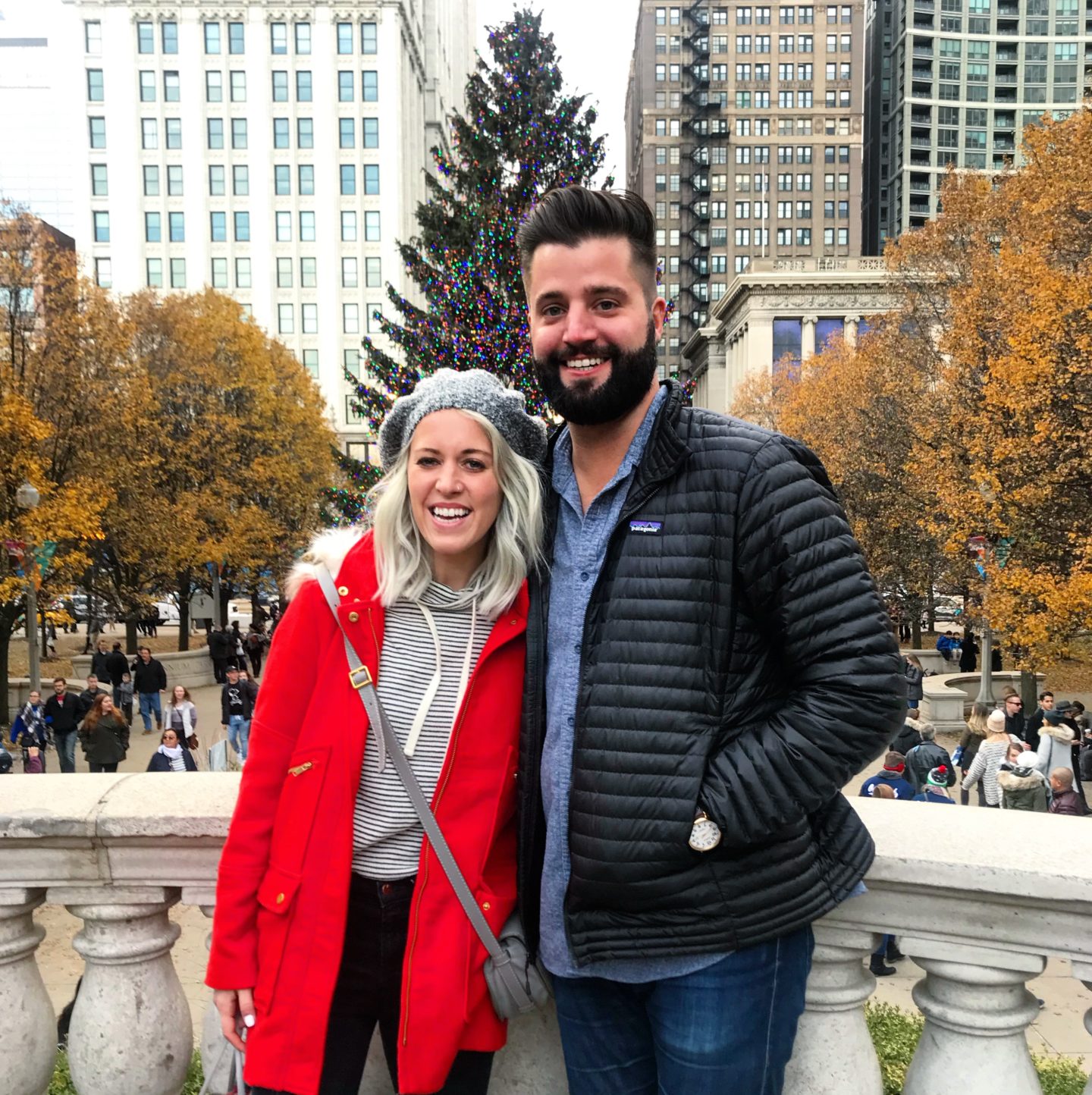 It all began on Friday night at a little “pop-up bar” called, “Frosty’s.” Well it actually began about two hours before that at Summer House, one of my favorite over-priced restaurants/bars in Lincoln Park, but let’s focus on the more festive parts of the evening.

Frosty’s was three floors (or maybe even four) of Christmas joy/Christmas club. In truth, it bordered on being just a little too clubby for me. But then again I could be at a library and if I heard someone playing their headphones too loud I would mutter, “geez, are we at a club or what???” My grandma ears just don’t love loud music. I never have. 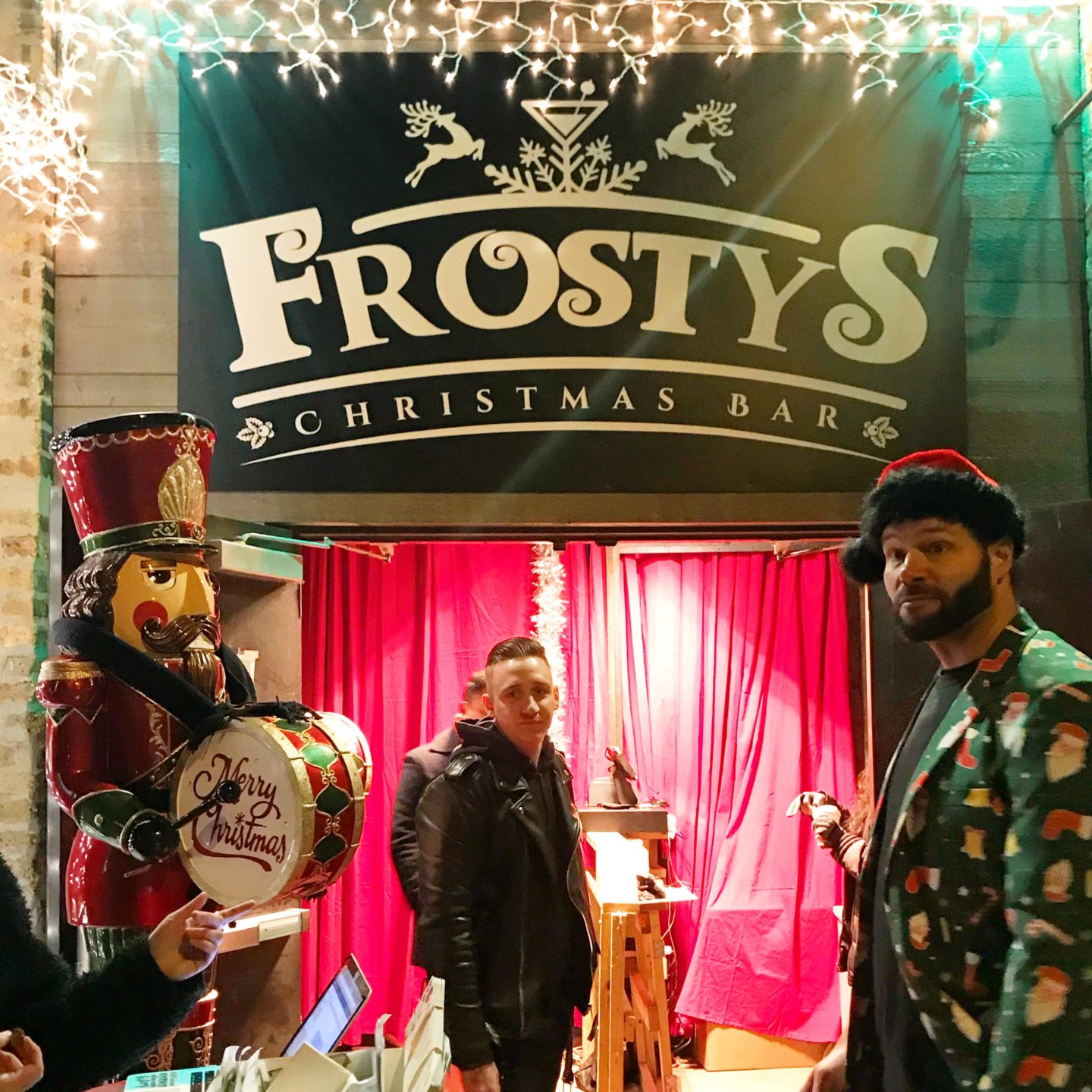 After Frosty’s got so packed that one could no longer move and I was starting to get glares for hogging the “sleigh ride” too long, we decided it was time to go to dinner. 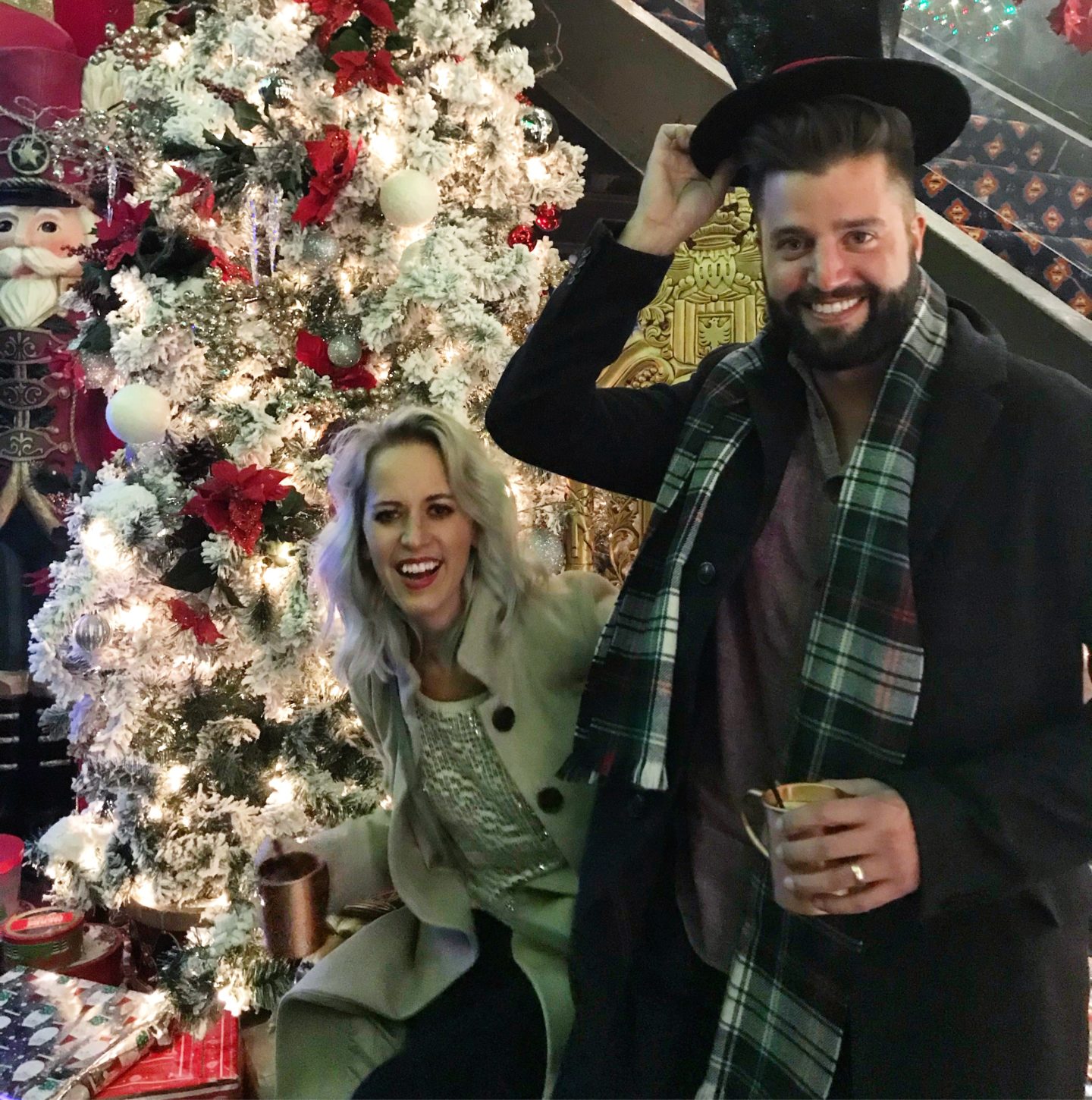 Dinner for the night was an intimate Italian restaurant called La Scarola. We must have burst through the front doors full of holiday spirit because for some reason the second we walked inside the owner (a man pretty well known in the Chicago area) decided he liked us and immediately began buying us drinks and even sat down sat with us for dinner.

We ate amazing pasta and drank wonderful red wine, while a wise old man told us stories of dining with Frank Sinatra and Dean Martin. It was all a bit surreal.

I woke up the next day thinking, was last night even real? And then my headache immediately jumped in and said, yes, yes it was.

But wait, you guys. There’s MORE!

Next stop was Macy’s to have lunch in the Walnut Room overlooking the large tree. But naturally that didn’t happen because the wait to do so was until at least January. Maybe next year! 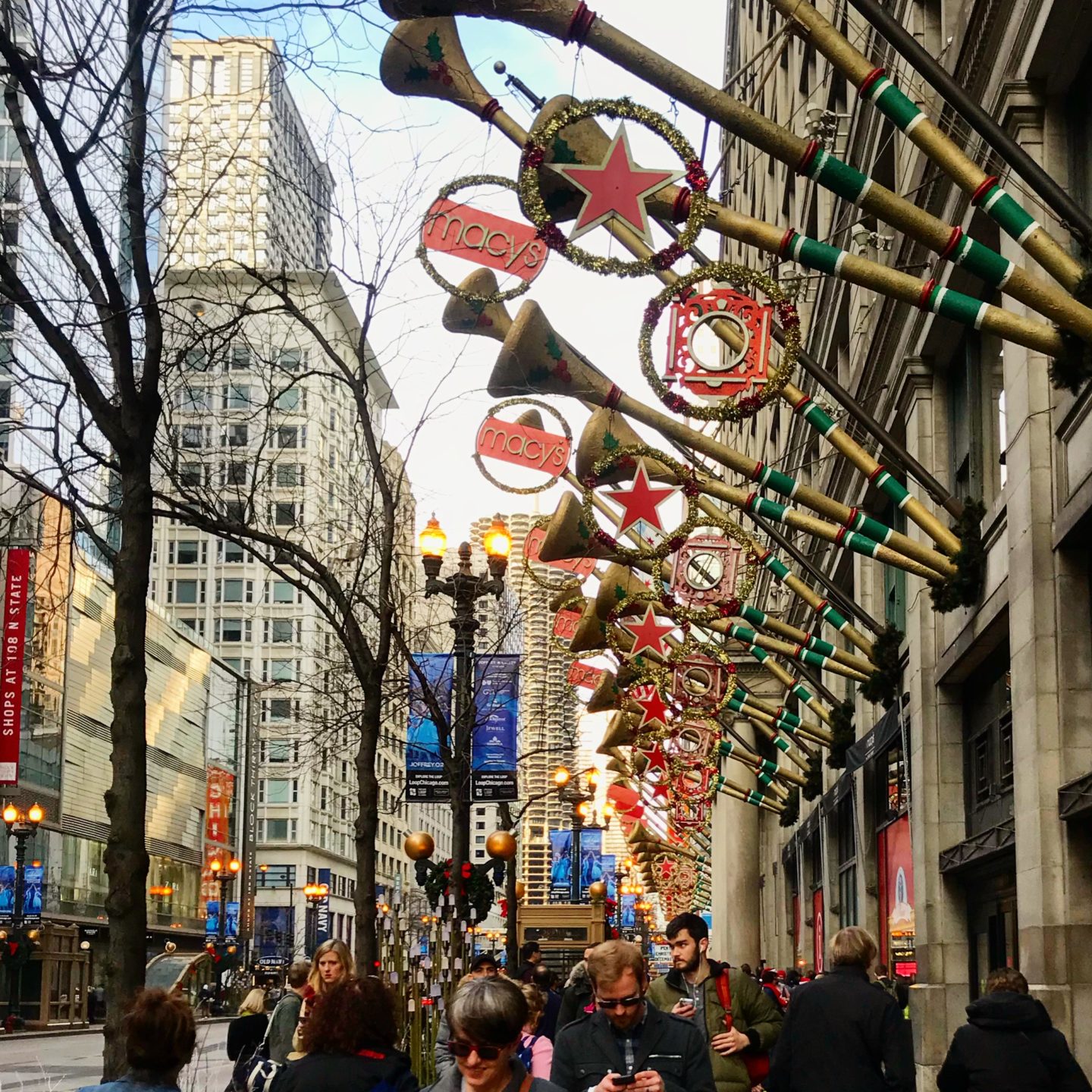 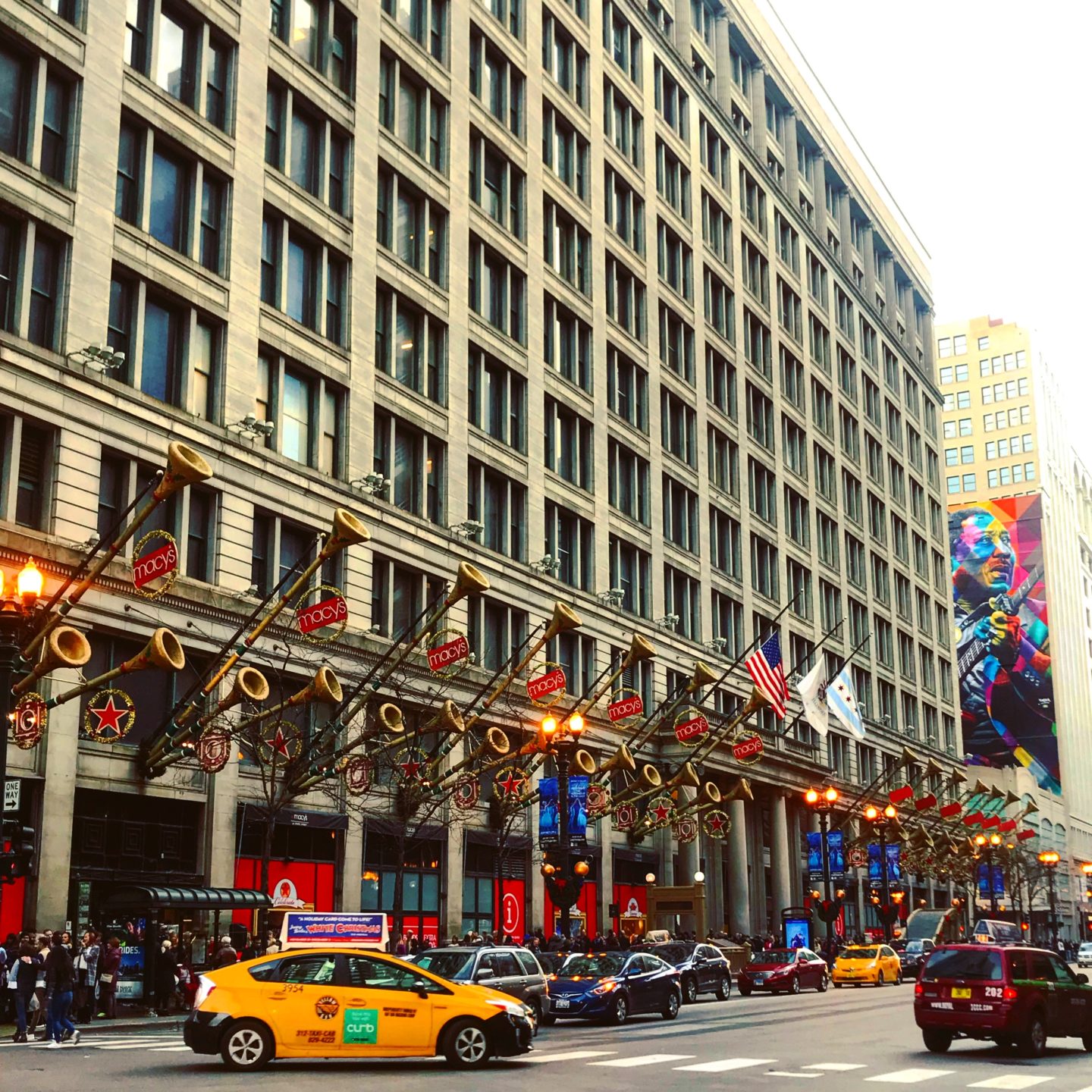 Instead, we opted for lunch at The Dearborn.

Whenever people visiting Chicago ask me where to eat downtown I’m always lost because 1. we rarely venture the two miles downtown. and 2. I don’t love most of the restaurants located “downtown.” Until now! The Dearborn, and its Bloody Mary and truffle fries, did not disappoint. 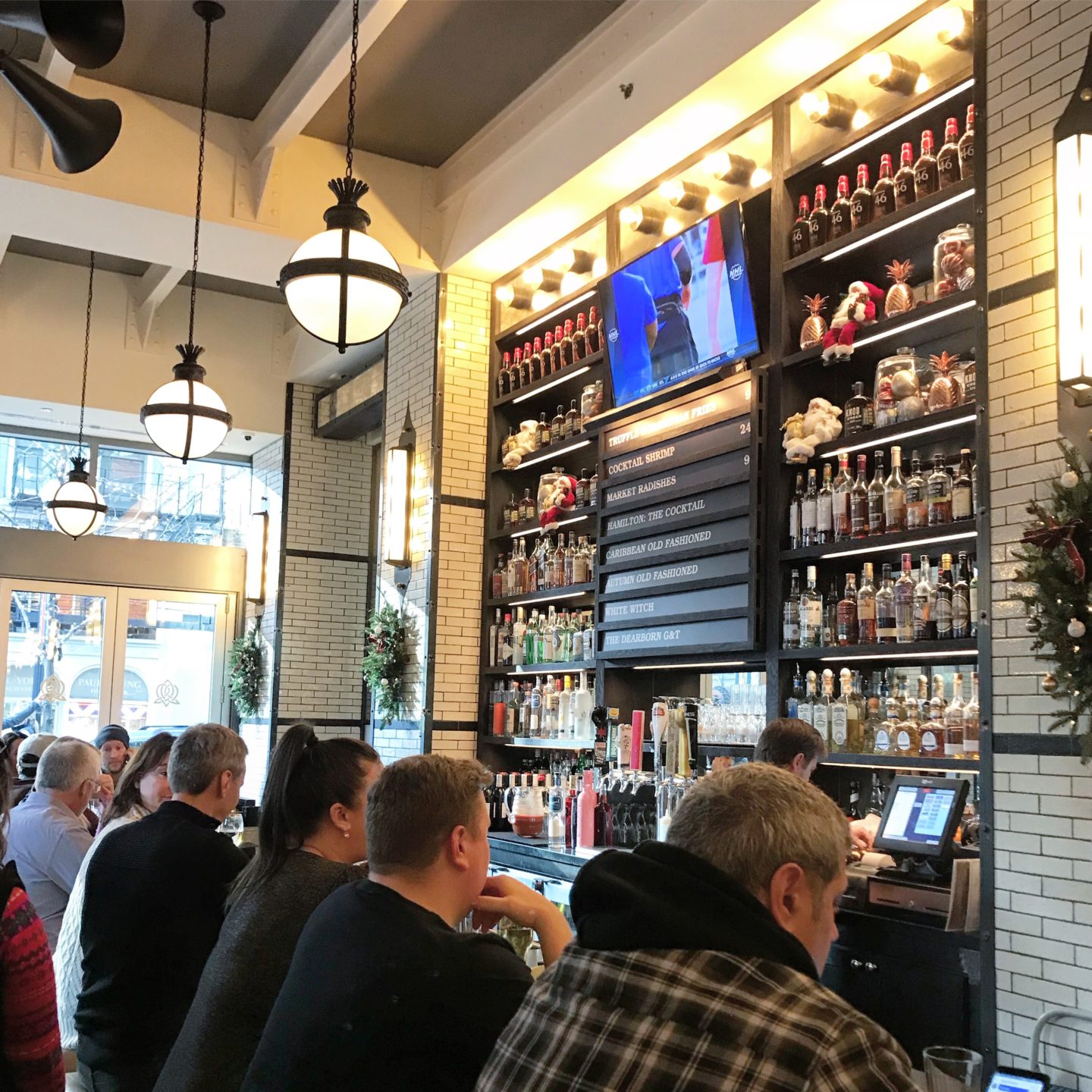 And after lunch we did something I’ve been waiting to do since we moved to Chicago more than six years ago. We rode the magical Christmas train. As it rolled into the Clark/Lake stop, Santa and his band seated on a festive (and also dangerous looking) roof-less train car, my heart almost flew out of my chest. It was real! The magical Christmas train really did exist! 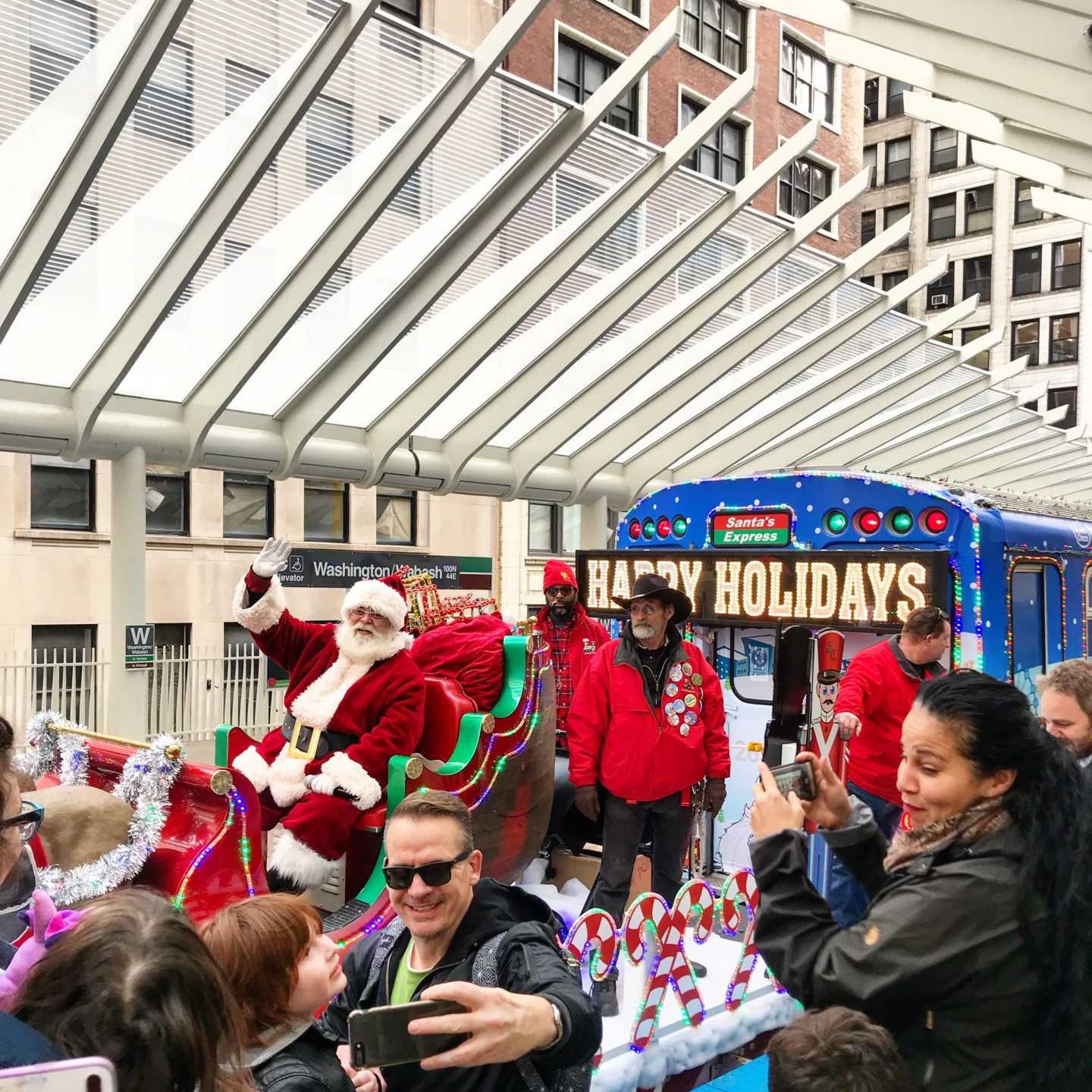 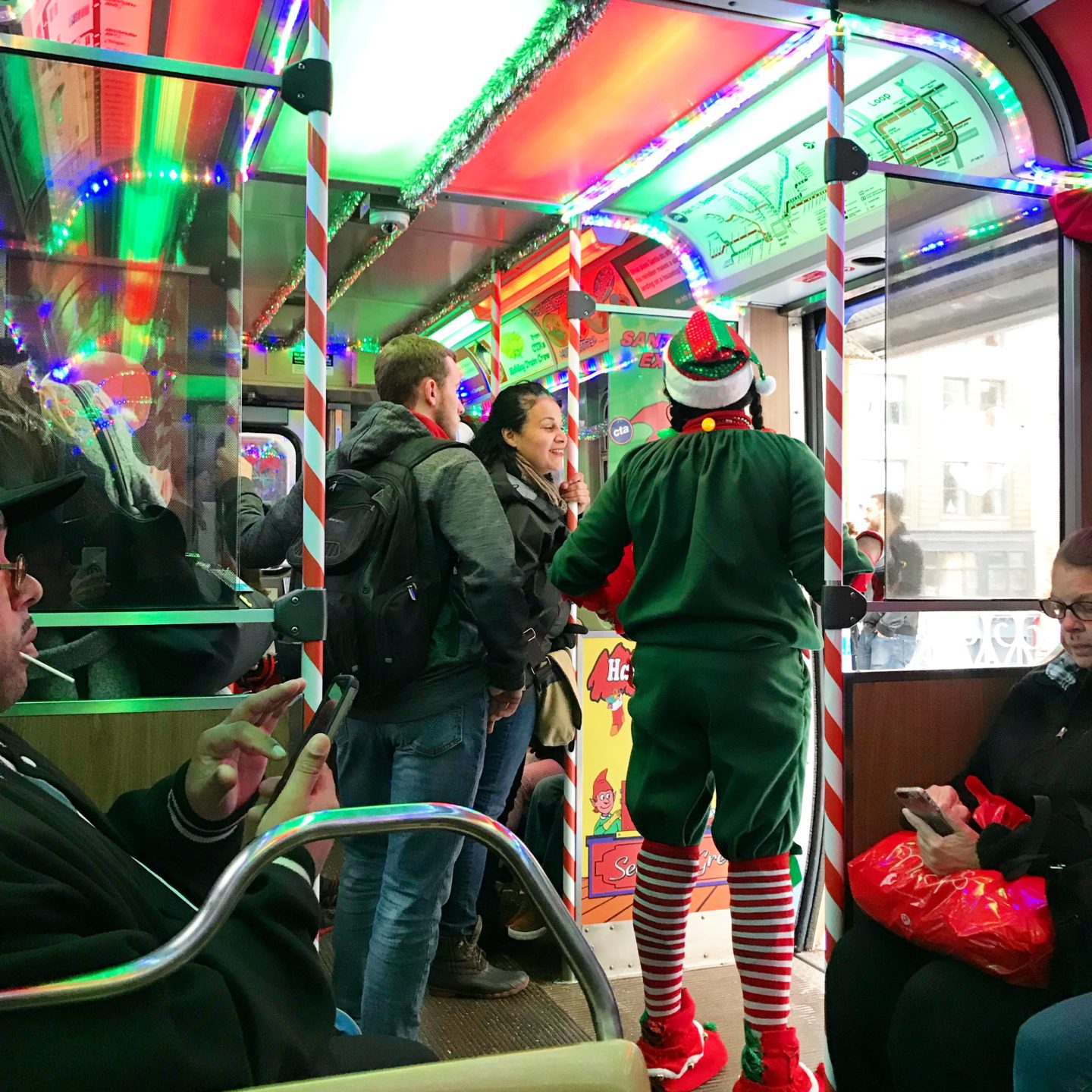 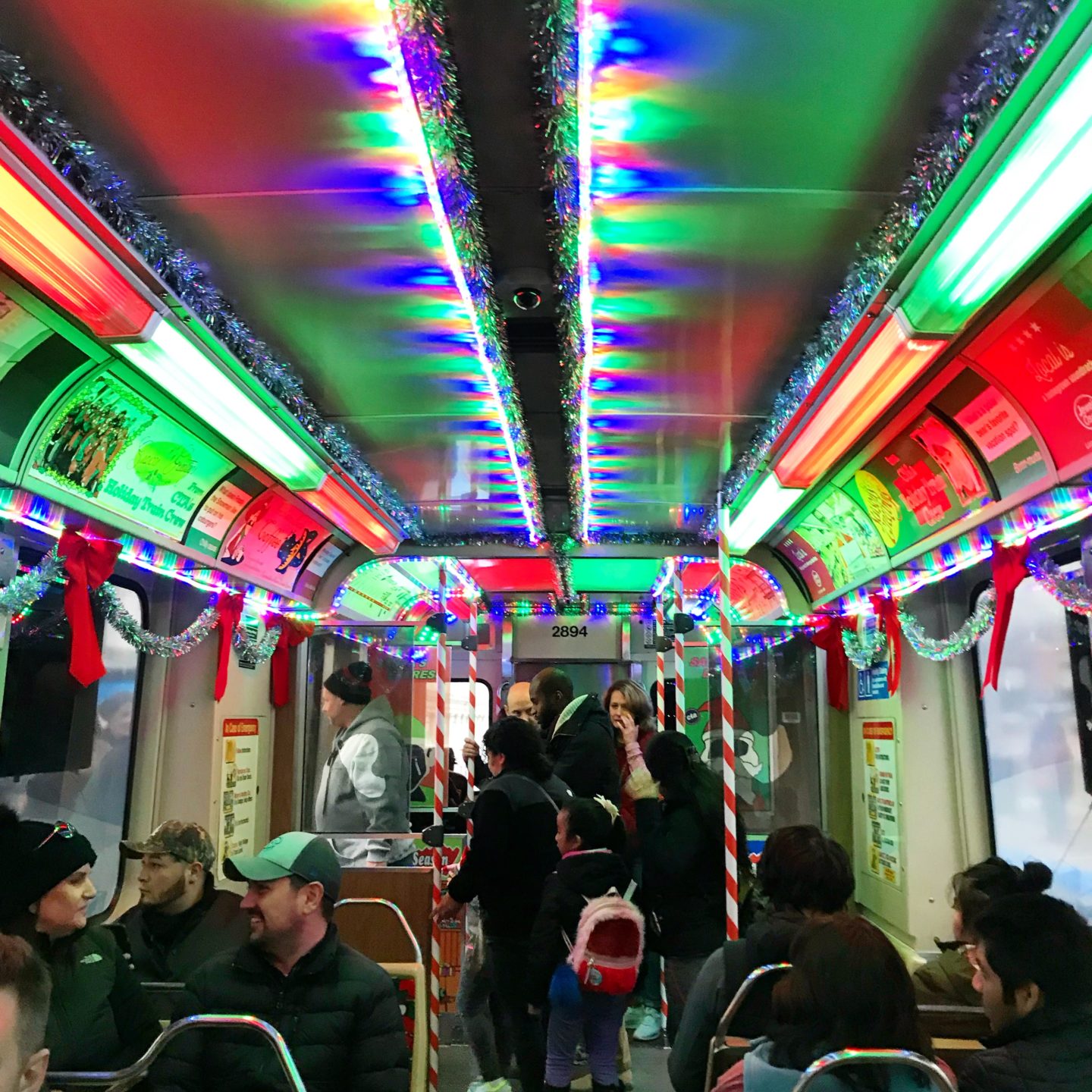 For those of you wondering, “Santa’s Express,” is just a regular CTA train, but it’s DECORATED! And it has elves and Santa, so it’s not really that regular at all- except there are people on it just trying to ride their normal route who were most likely very annoyed by people like me. 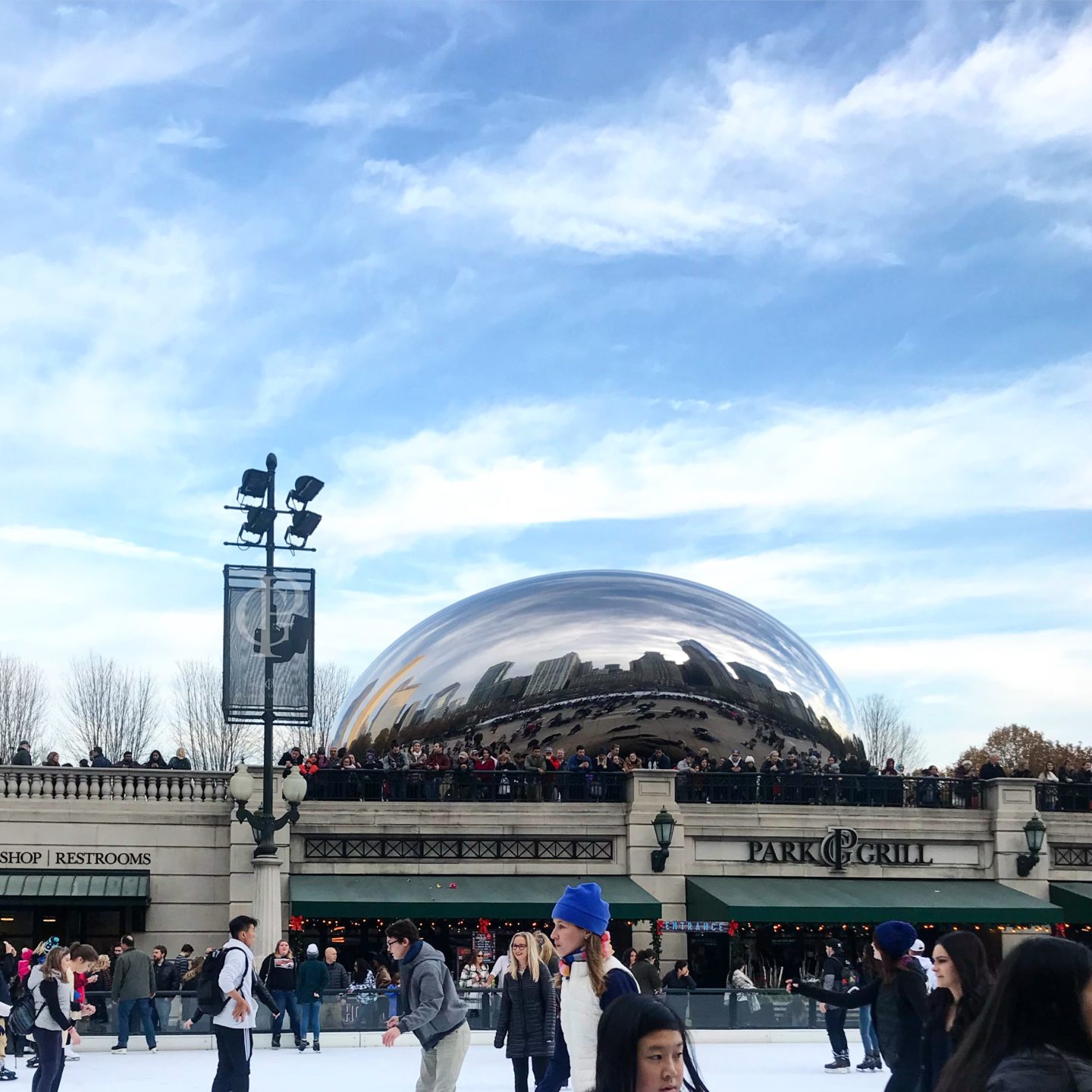 After the magical train we went ice-skating and saw the tree at Millenium Park. And by “ice-skating” I mean we waited in line to get skates for about twenty minutes and then decided we should go get beers at Butch McGuire’s, instead. Arguably one of the Christmas bars in the city. (Not a pop-up like Frosty’s.)

And so we walked down the busy streets of downtown toward the bars on Division, on a Saturday night in December when it was nearly fifty degrees, and enjoyed every second of it. 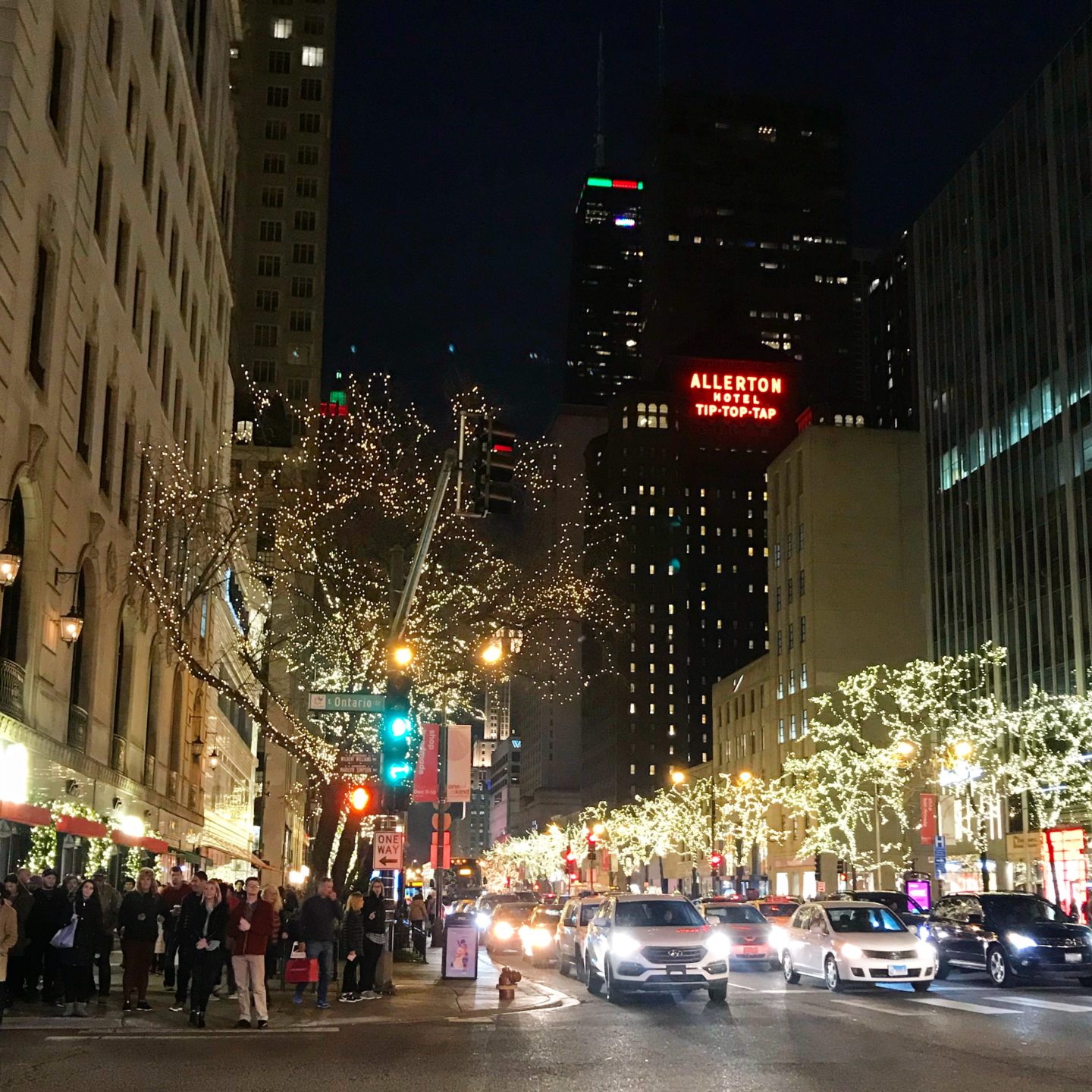 Man, I love this city. *Not because of the biker vs tourist fight, that was just a fun anecdote I added from the night.

Our Best Christmas Weekend Ever ended on the street that would shoot us straight us right back to Wicker Park. The Lodge and Butch McGuires welcomed us with open (and sweaty) arms as Christmas tunes blasted and small toy trains tooted their way around above our heads. 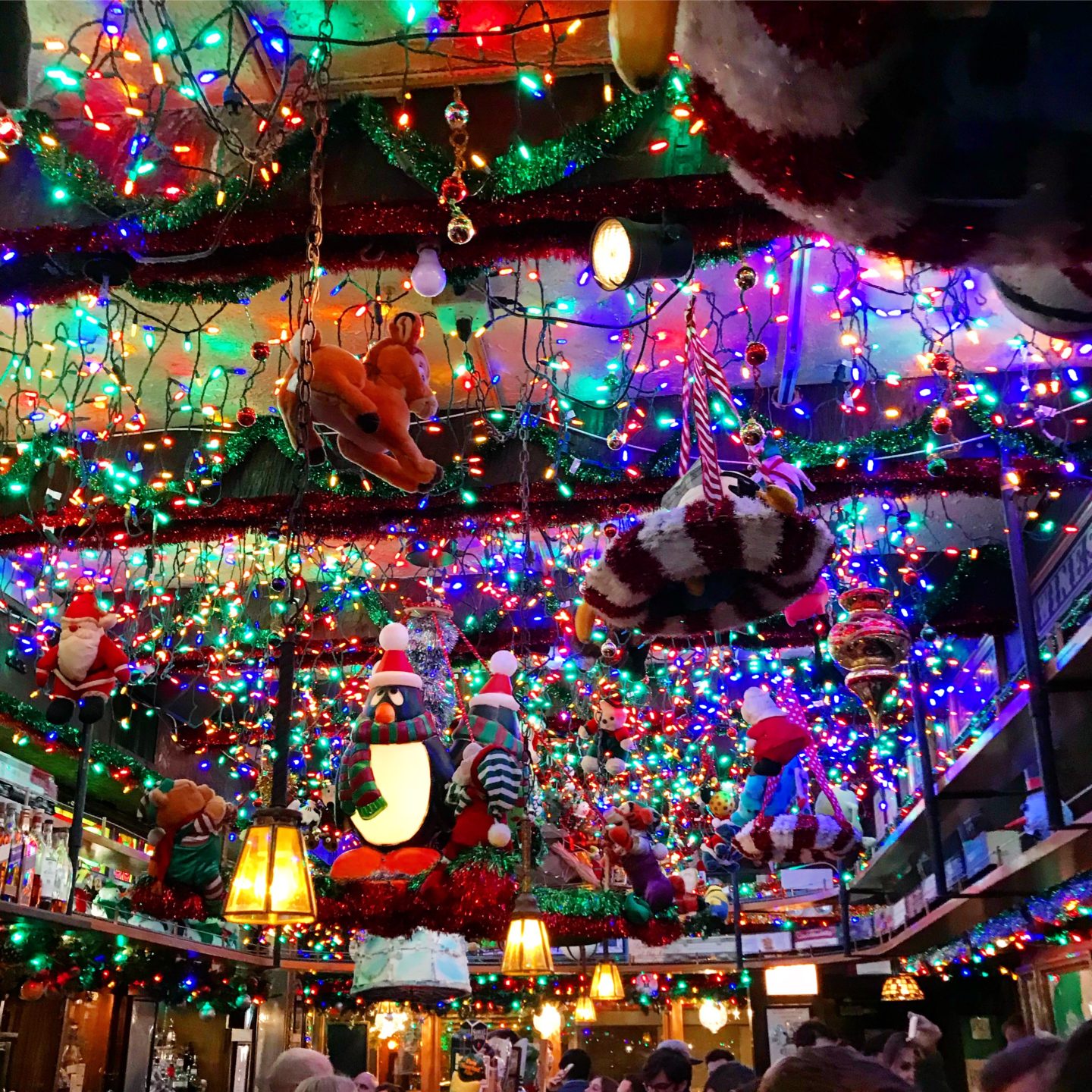 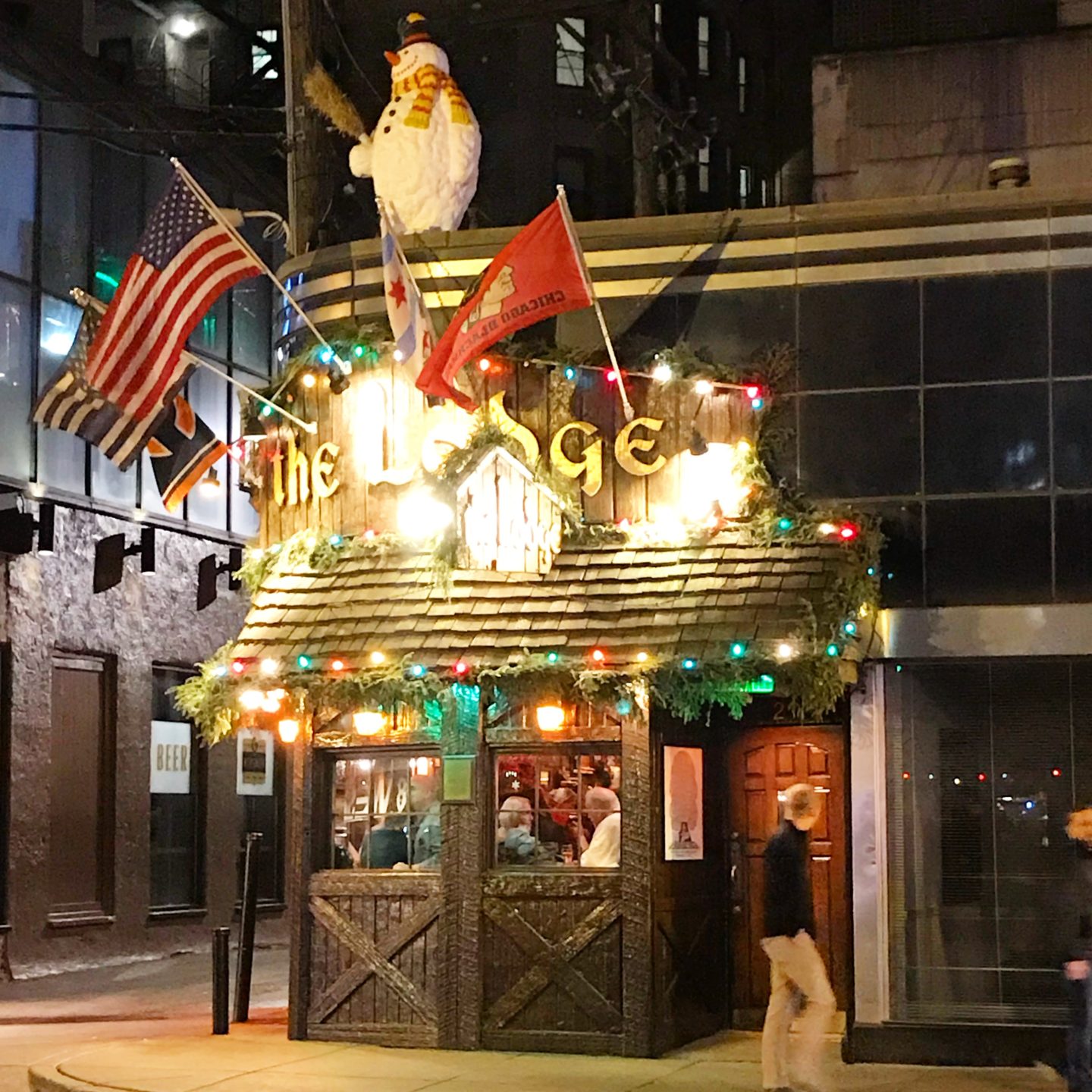 It was a perfect weekend. If you’re in Chicago, or visit Chicago in December, do everything mentioned above and I promise you’ll have a good time. *except perhaps Frosty’s, that got weird.

Now if you’ll excuse me Harlow is slapping my face, which is his subtle way of telling me it’s time for a walk.