(Because our anniversary is Monday and I look for ANY excuse to talk about our wedding.)

Allow me to set the scene.

It’s 6:30 a.m. on July 23rd in Steamboat, Colorado. My alarm is going off and I am painfully tired. The kind of tired that hurts deep in your eyes and feels heavy in your limbs.

In my state of exhaustion and grogginess, I have no idea why my alarm is beeping so early. I need at least four more hours of sleep to feel like a human. Maybe forty.

And then I remember.  I’m getting married today.

With that, the exhaustion hits me even harder. A surge of regret runs through me and I think to myself, damnit Taylor you did exactly what you said you wouldn’t do.

In my defense, everyone did. (In our suite.) The only problem with having the party room, is having the party room. I recall going to bed around 1:30 a.m. (so just five hours previous) and thinking to myself, you may regret this in the morning… But the Michelle Tanner devil on my other shoulder whispered, nah girl you good! It’s called photoshop!

This was taken at 1:36 a.m. I’m already wearing my Married AF shirt because the self promotion runs strong- even on my wedding day. 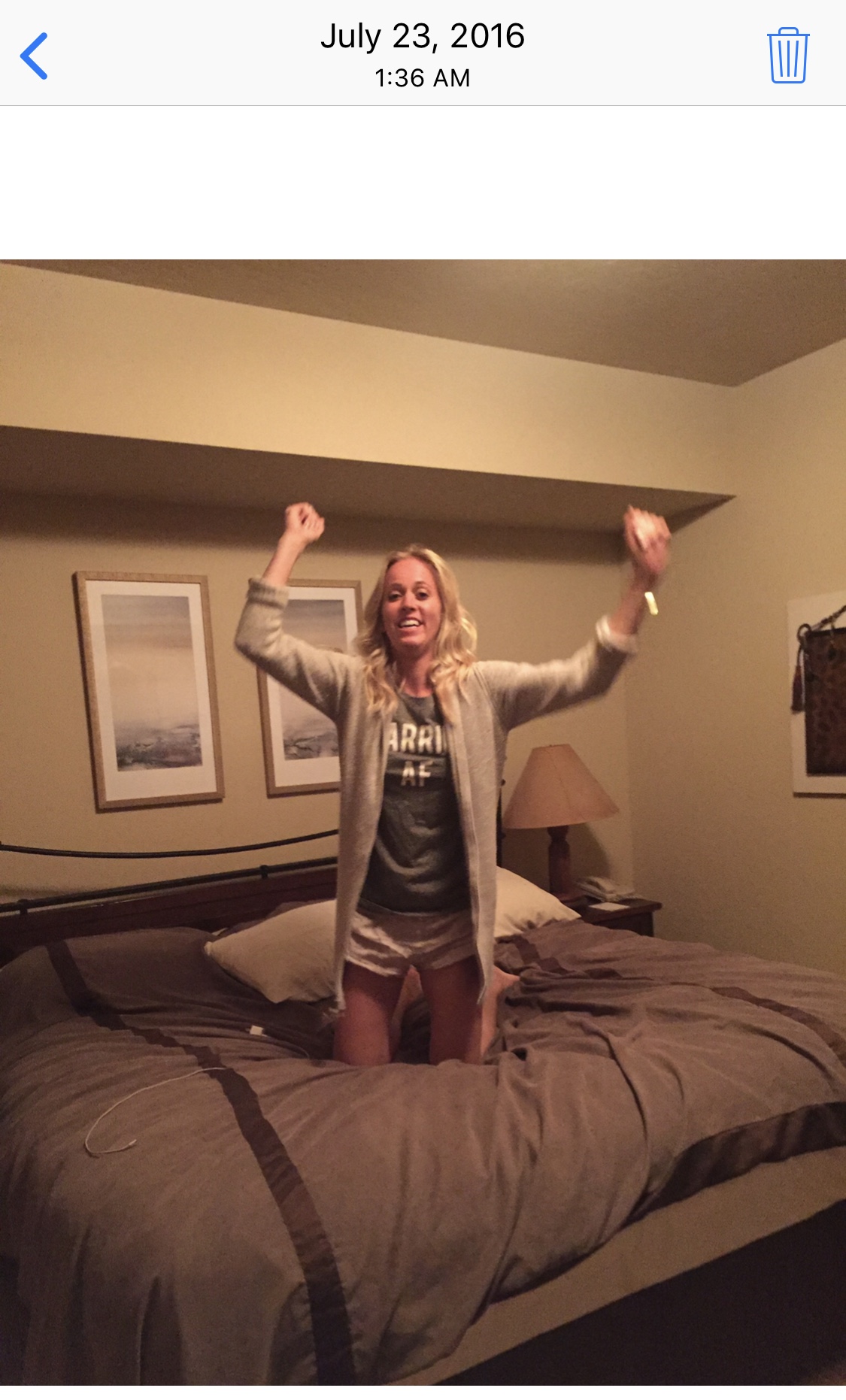 As I lie in bed on the morning of our wedding I truly thought about texting our hair and makeup team and asking, could we push this back until noon rather than 9:00? Forget my bridesmaids’ hair, I’m the only one that matters. (I can be very selfish when I’m tired.)

But then I came to my senses when Kate, the bridesmaid I forced to sleep with me, turned over and shouted, “you’re getting married today!”

“I’ve never been this tired in my life,” I whispered in a raspy morning voice. “How did I let this happen?”

But even as I write this, I know there’s a bit of bullshit there. While I pretended to be surprised at my own exhaustion on that morning, I knew.

I knew it would happen.

Because here’s the thing, I knew there would never be another time in my life when literally all of our friends and family were gathered together in one amazing little mountain town so I said screw it, I’m making the most of it. And to me that meant bar parties on the Yampa river every night followed by after hours in our suites at the resort.

Starting on Wednesday when our friends began to arrive in Colorado (God bless them) Chris and I broke all of the rules a bride and groom should follow and drank too much, ate too much, and had the best week of our lives in the process. If you’re a bride-to-be, or even just a person who doesn’t believe in excess, you’re probably gasping at this. And that’s okay, I don’t expect everyone to understand the decision we made.

But once again, I had no one to blame but myself for being in the situation that I was.

And so with a heavy sigh and one deep breath, I pulled myself out of bed and did what any good bride would do- I walked to the kitchen and made myself a Bloody Mary and said, let’s do this. And suddenly I wasn’t tired anymore. It was like some weird bride voo doo magic took over and I was amped. (I think it’s called adrenaline.)

Slowly but surely, everyone started to wake up and the morning came alive. Mimosas were poured, stories of the night before were told, and the buzz of a wedding day began to fill the suite. We booked the biggest room the resort had to offer so I could force all of my friends to be around me 24/7 and it was the best decision I ever made. 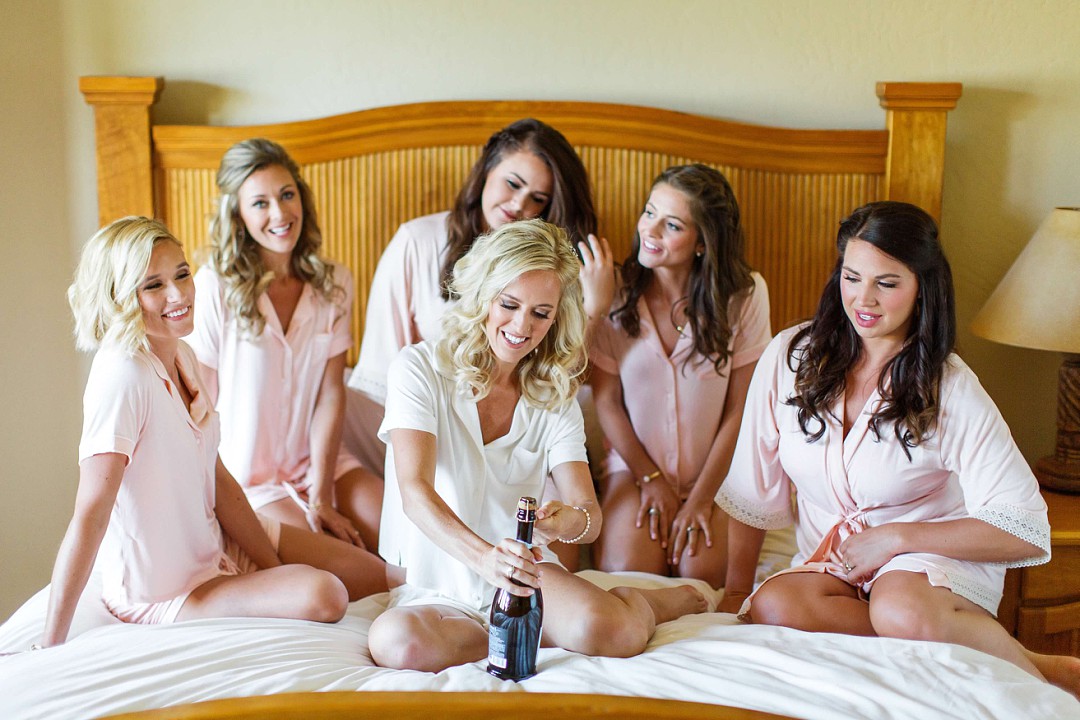 All day long it was a flutter of people coming in and out of the room to say hello and wish congrats. My parent’s friends, Chris’s friends, relatives from all over the country; there was just so much good energy around us that I can practically feel it as I type this now, even two years later. 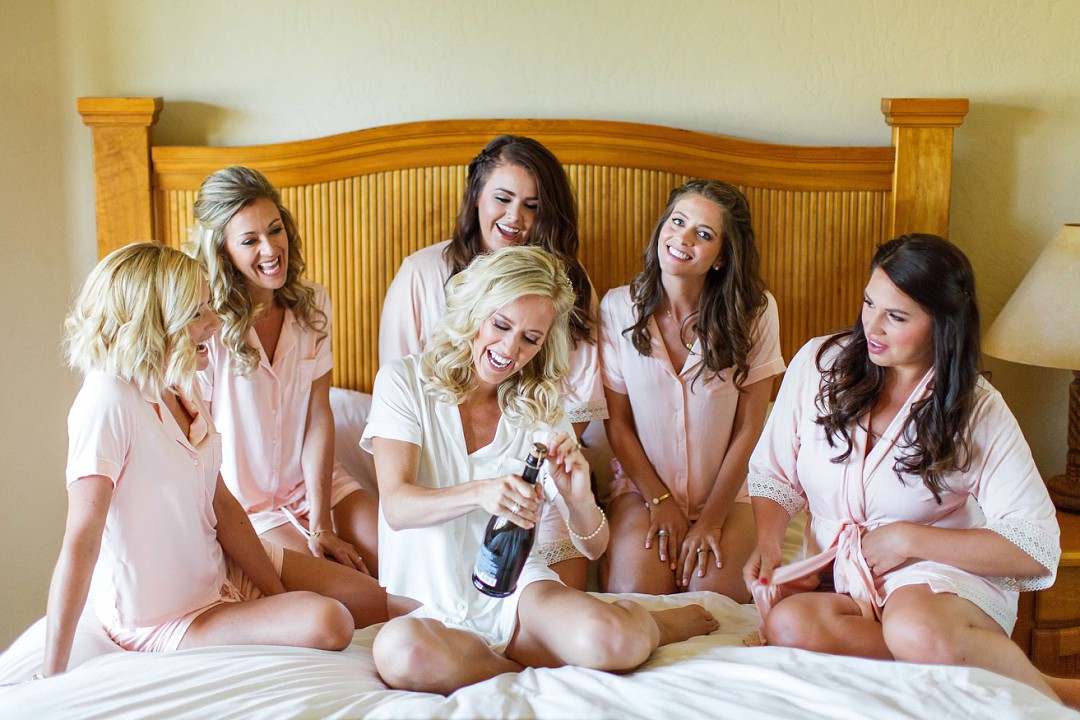 The day felt chill and relaxed and everything seemed to be completely on schedule until suddenly we turned a sharp corner and the urgency began to set in.

It’s what time? Oh no?! I have to get going. Where did the morning go?

It was as if we went from having ample amount of time to oh shit we gotta get going asap!

You know those gorgeous Pinterest photos that show a bride putting on her dress while her bridesmaids look on with happy tears in their eyes? Yeah, that didn’t happen for me. I actually had to shout, “hey will someone zip this for me?” because no one was around. They were either all getting ready, or mixing more drinks. I’ll never know.

Once my dress was on, our photographer staged a few “look at me putting my dress on” photos since my asshole friends were all too busy to actually do the real thing. JK 😉 (None of them read this so it’s fine.) 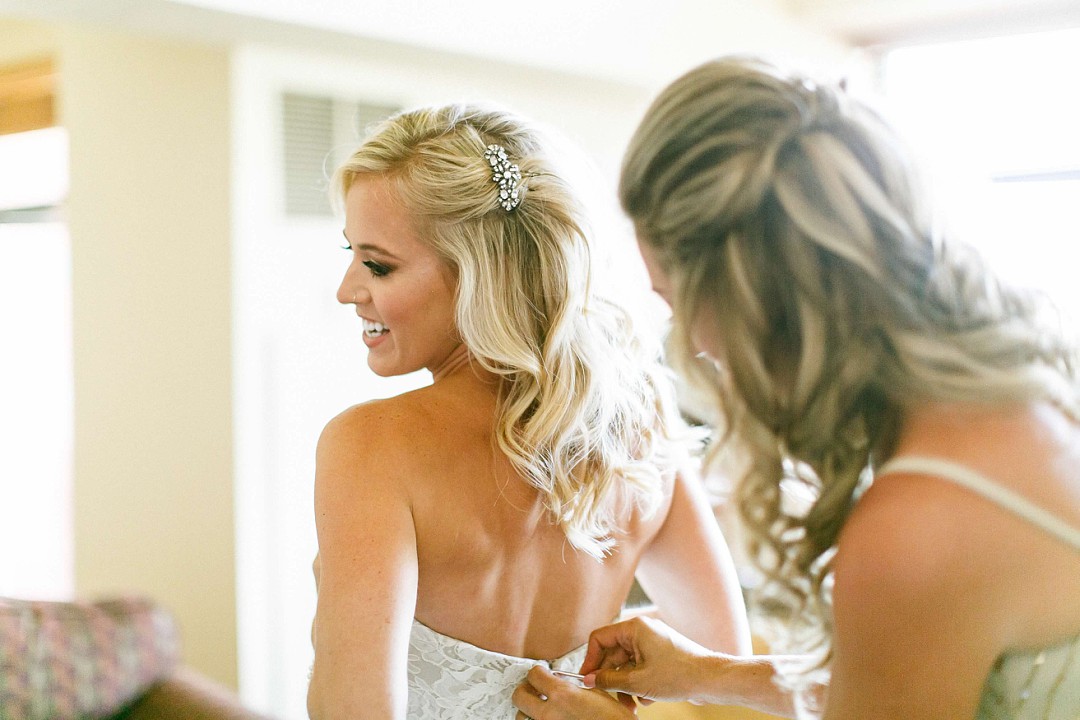 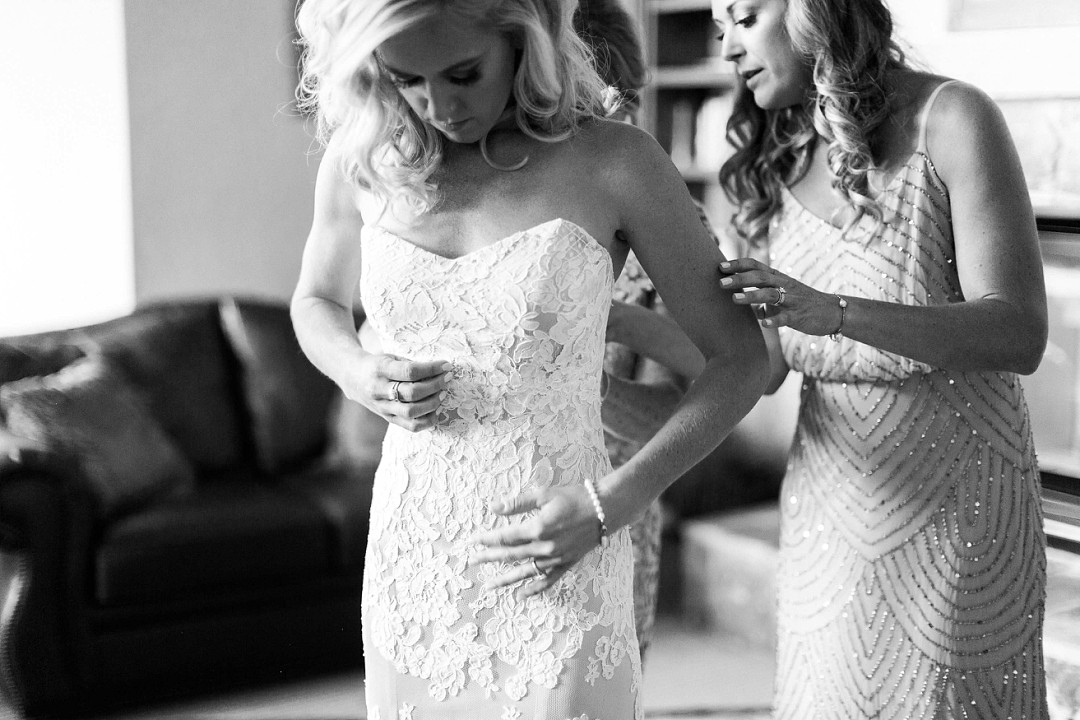 (Not bad for fake pics, right?)

And after all of the chaos of getting ready was finished, it was time for the FIRST LOOK.

This was the first time I got nervous for the day, because this was the first time real emotions were involved. Here’s the thing about me, I HATE showing emotion in public (unless it’s animal related.) I will cry uncontrollably at home during a sad movie, but in public? Nope. Must pretend to be a statue. I don’t know why I’m this way, there’s probably some deep rooted issues I should look into, but now’s not the time. I’ll figure it out in my forties.

I grabbed two bridesmaids I knew would keep me together and made a dash for “the spot” where Chris and I were set to meet before anyone got too emotional on me (like my mom or sister.)

Once in the lobby, other hotel guests gave me those weird smiles one tends to give a bride when they’re spotted in the wild. I heard the, “look, there’s the bride” whispers and that’s when it started to hit me, “whoa, I’m a bride and today is my wedding day.” Nothing gets by me, huh?

And now we’re at the part when I’m standing with Tyeler and Kate outside of the balcony doors where I’m supposed to walk out and see Chris for the first time (AS A GROOM) and my face starts to get really hot and I begin to choke back tears.

“What’s wrong with me? It’s just Chris! Why am I so nervous? I hate this!” I start to whimper. I hate feeling out of control of my feelings and that’s what was happening.

“It’s okay! This is normal, this part is weird,” they both convinced me, having been through this before.

I could see the photographer through the doors and he was motioning for me come in, so I knew I had to go. And so with my shoulders slumped and my nerves on full blast, I walked up to Chris like a little kid going to kindergarten for the first time.

I think I said his name before I tapped his shoulder; (wanting this to be over as soon as possible.) I remember that he turned around and in his Harlow voice (which is his sweet voice) he said, “ohhhhhh” and then he held out his arms and I collapsed into him. 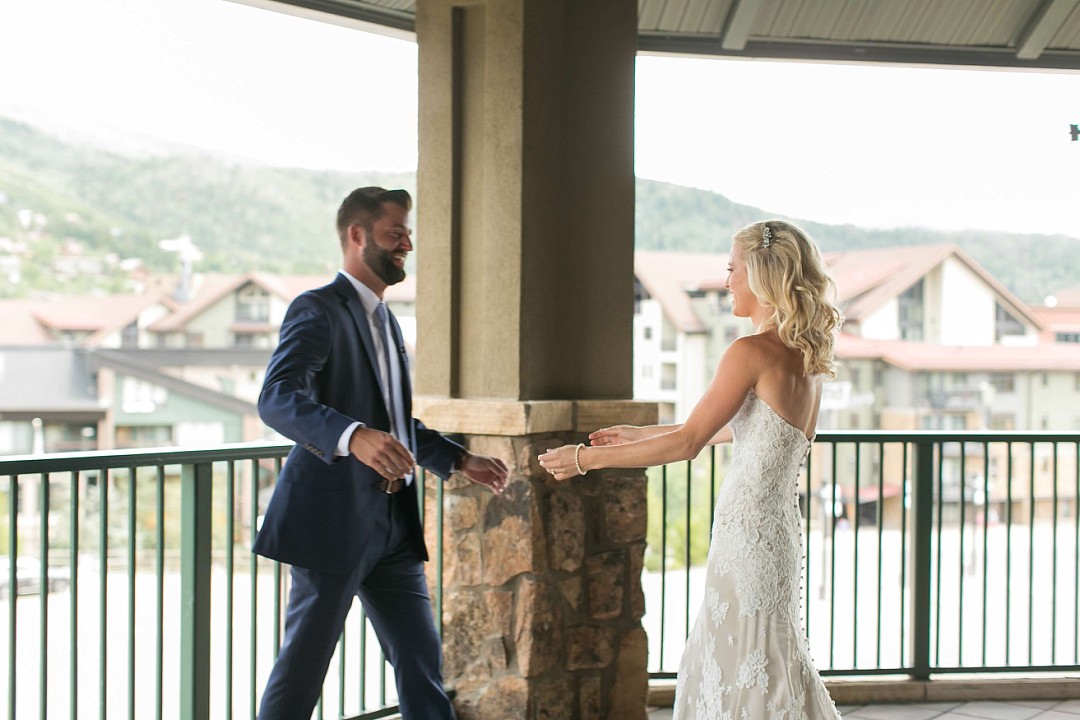 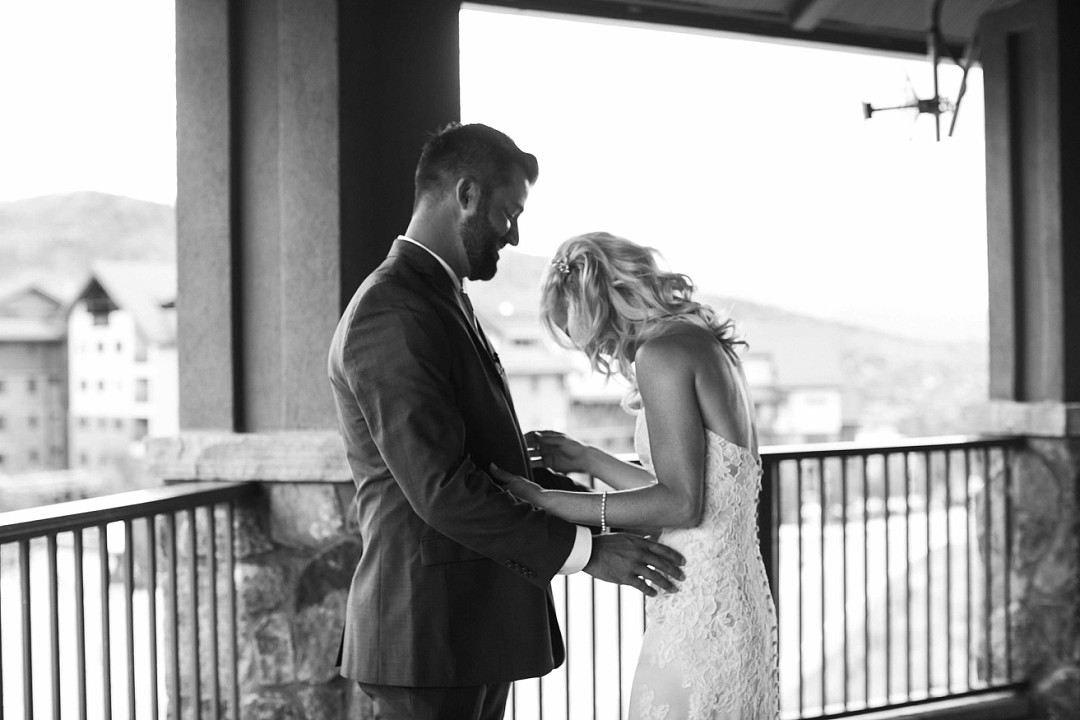 The only thing I could muster was, “I’m uncomfortable.” And truer words have never been spoken. Then I gave him two swift pats on the back like a coach, or an uncle you see twice a year.

It was at this point that I saw he was mic’d (and I also saw a crew of videographers surrounding us) and I just said, “oh shit.” I’d told Ross (our awesome videographer, seriously brides- book him!) Anyway, I had mentioned to Ross that I was a little uncomfortable with the first look being recorded and he didn’t pressure me at all, but told me that it was something I may regret not having on film, and so the day before I gave him the green light.

And he was right, even though I still cringe-watch this moment, it makes me lol because my awkwardness is just so apparent and on full display that I can’t help but feel as if it’s one of my better comedy highlights. 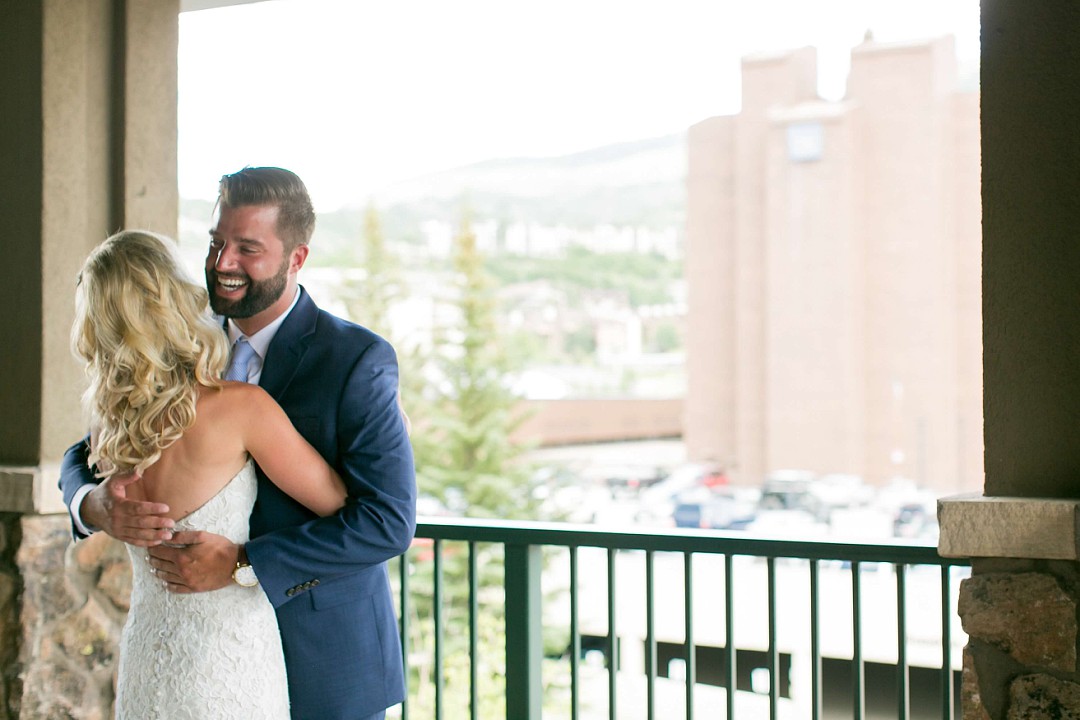 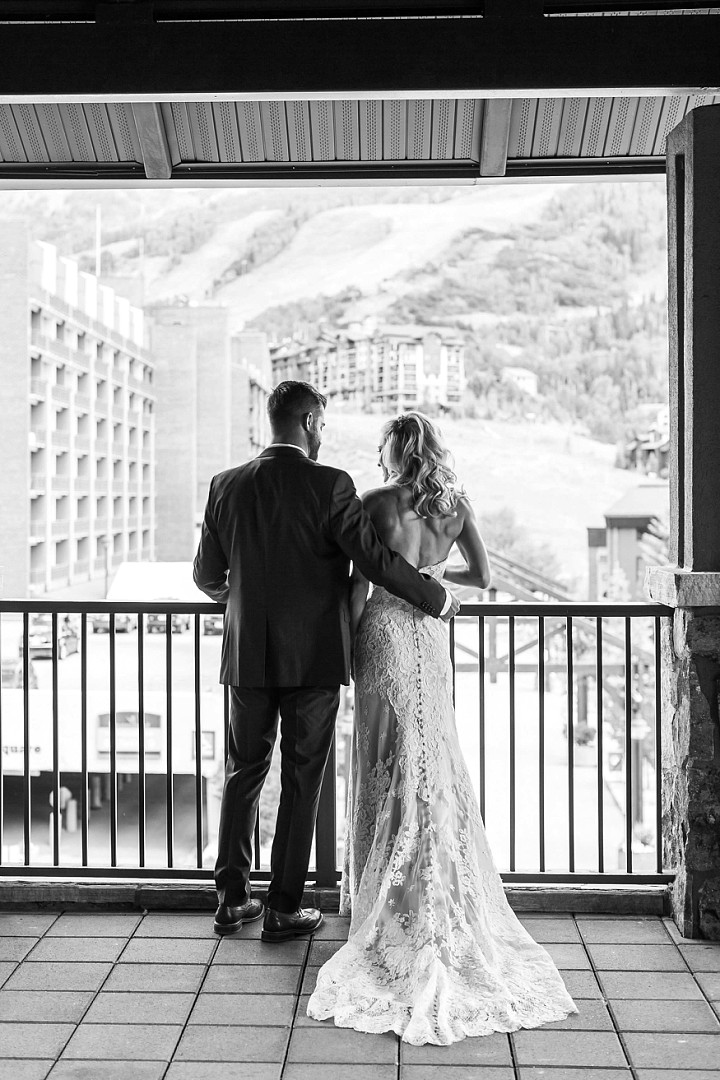 After that moment, it was as if a ton of bricks had been lifted off of me and I felt light again. I felt like myself.

“Let’s go to the reception now!” I whispered to Chris as we walked out together, ready to find everyone else to get on the shuttle.

“K… but you know we still have to get married first,” he said.

Classic Chris, always the logical one.

And this is where things get interesting… when the little oops and ut-ohs start to fill in because people feel rushed and things get forgotten. Like the flowers, for example. Every single bouquet (mine included) were left at the resort as we made our way to Lake Catamount (about a twenty minute trip) for photos and for the ceremony.

And then when we got to the ceremony, the person we hired to decorate had just gotten started… She was still hanging flowers on our arch as guests were taking their seats. In short, if you ever get married in Steamboat- send me a message and I’ll tell you exactly who NOT to hire to do your florals. (The forgetting of the flowers at the resort was 100% us, but the being late to set up? That was her.) I’m definitely still not bitter, can you tell?

I have to break this up into two posts, as I do. And I know I usually always forget to write the second half of a post, but I promise that won’t happen this time because it’s wedding related and I love nothing more than talking about our wedding because I’m a crazed maniac who can’t get over it!!

Part two: The Ceremony and the Reception!

spoiler: the flowers made it! 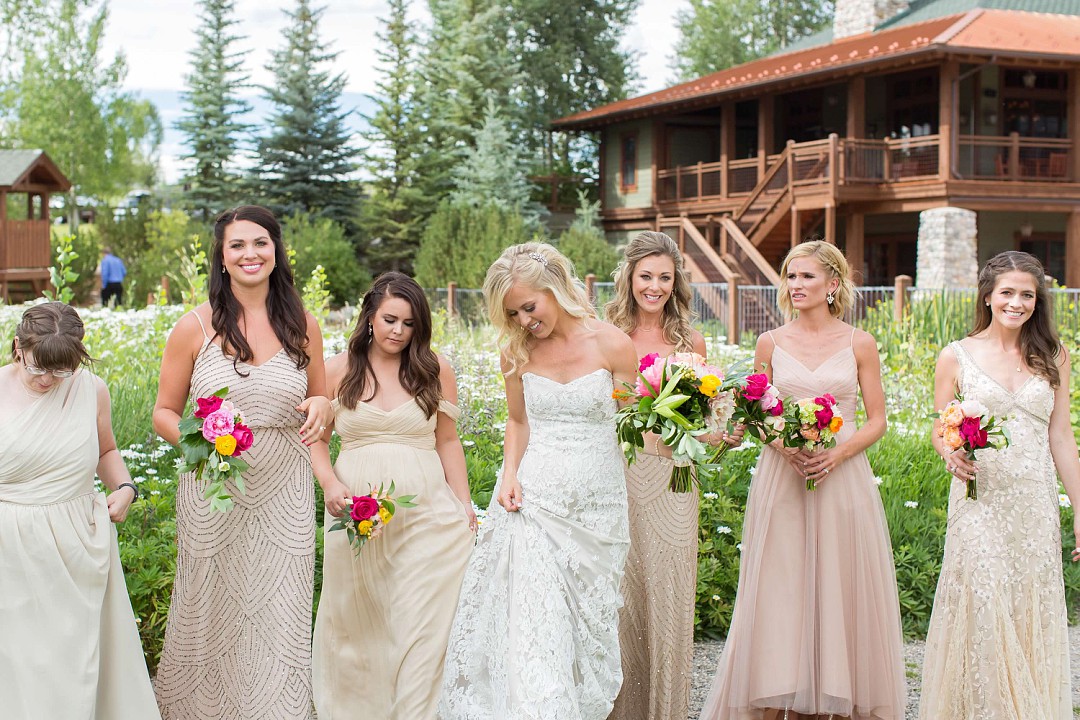 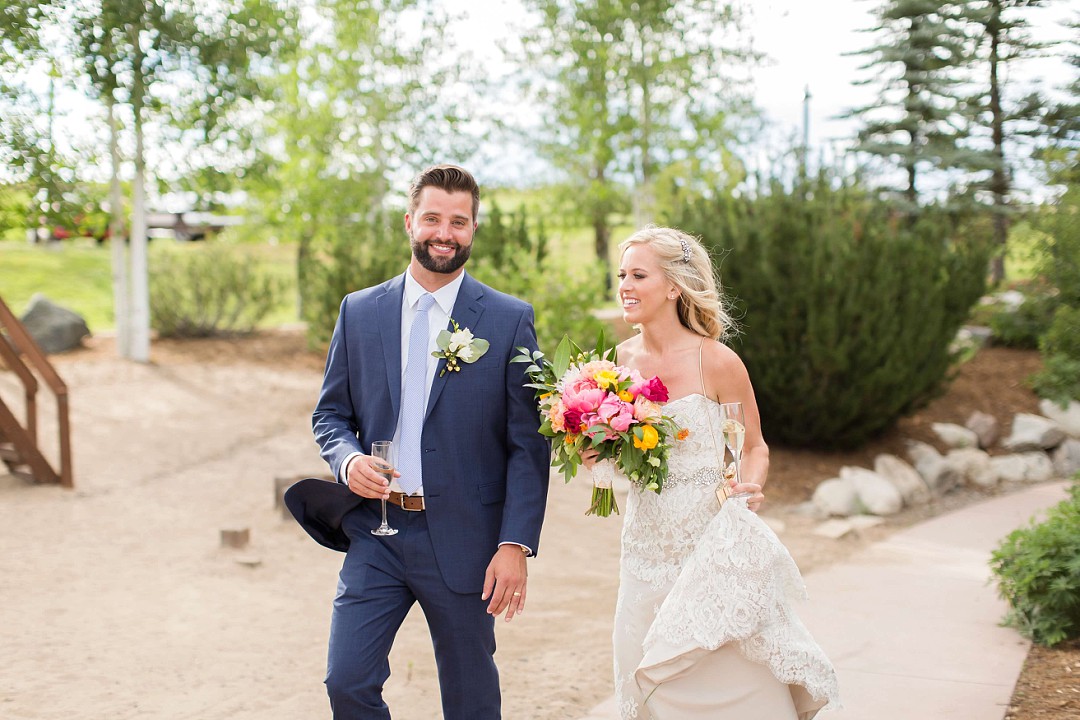 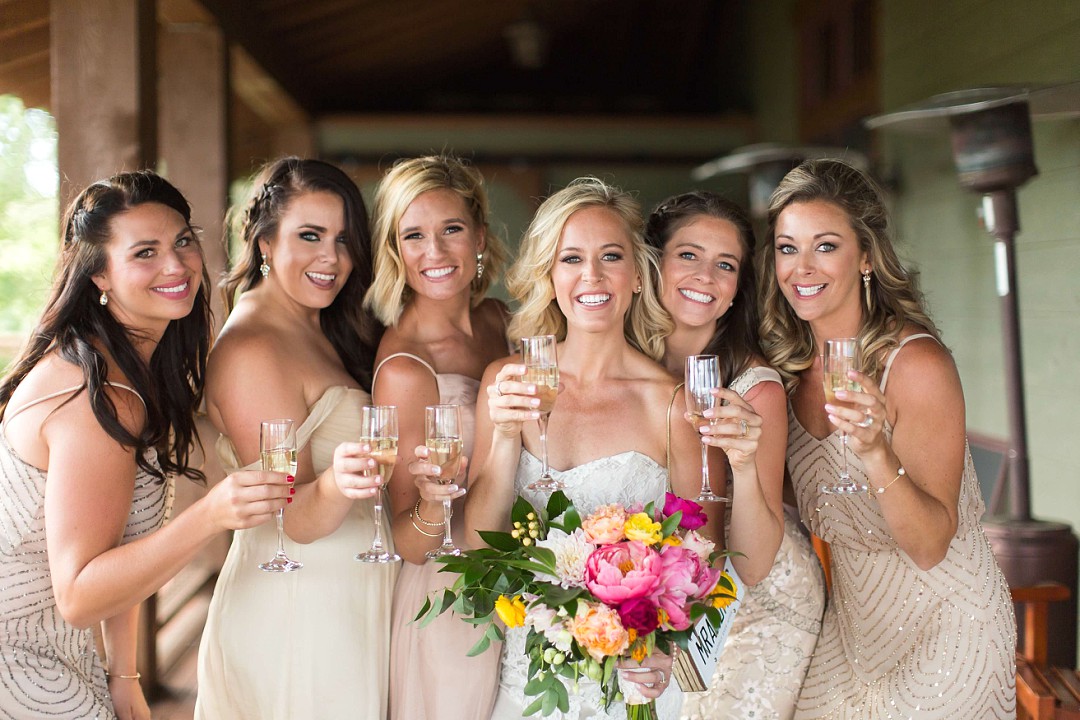 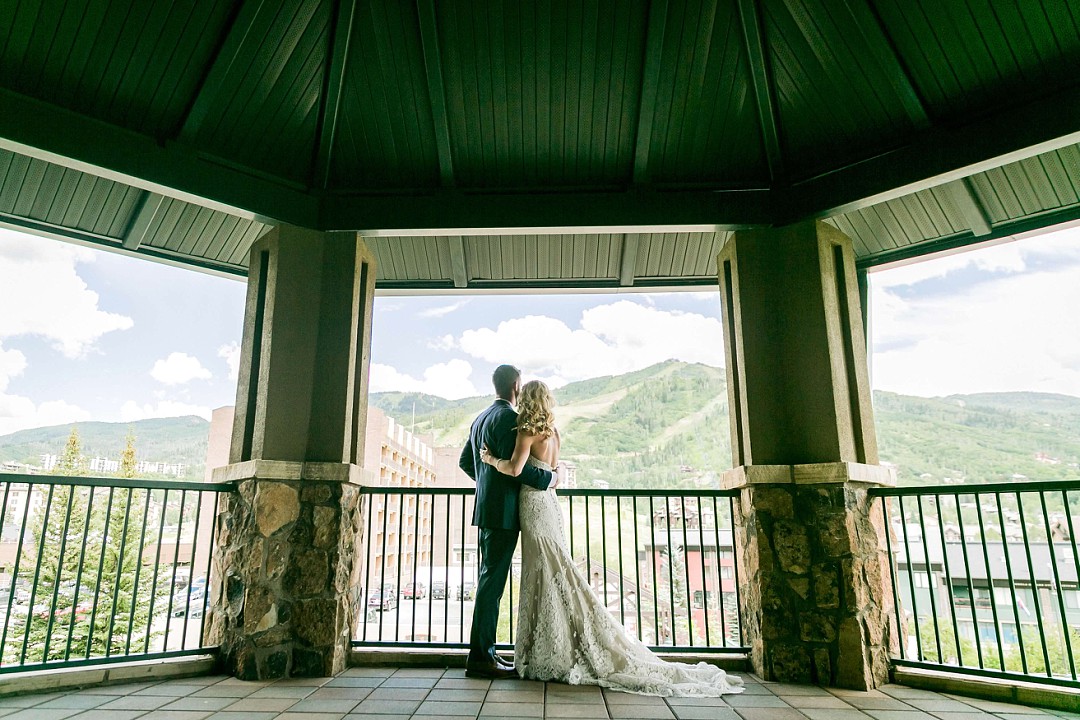