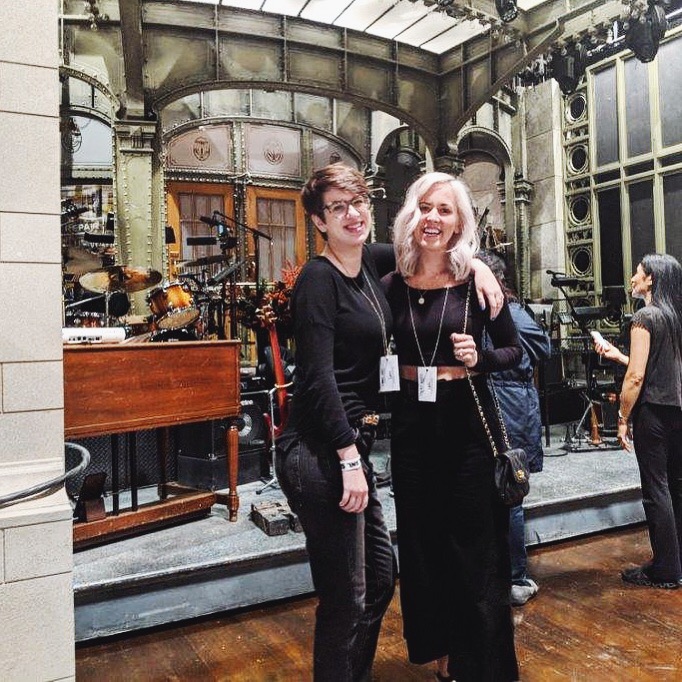 It’s 11:25 p.m. last Saturday night and my friend Claire and I are scurrying to the writers room at Saturday Night Live to make sure we catch the cold open. We’re walking down the thin studio halls that are adorned will photos of every single celebrity ever. The hallway has an old musty smell to it, like a basement of an office supply store or something. We pass a dressing room that says Lorne Michaels and I try not to gasp. A second later Colin Jost pops out of another room and nearly runs into Claire and I. He smiles and gives us a quick, “hey,” and then disappears.

“Oh my God that was…” I whisper and Claire gives me a knowing smile.

We make it to the writers room just as Kate McKinnon makes her appearance on screen, “shhh,” someone says, “it’s on.”

And then people sit around the large table that fills the room, or on the small couches that are jammed against the wall, some stand in the back.

I’m watching one of my all time favorite TV shows with the very people who wrote it. I try not to be overcome by it, but I am.

“The stage is right out there,” Claire points to the large window that’s covered with a curtain. It reminds me of being in a conference room at a hotel and outside of that covered window is the indoor pool. But instead it’s the iconic stage that has held every comedian I’ve ever looked up to, ever.

Before I go any further, I feel like I need to say that I’ve debated how to write this post for several days now. On the one hand, if you’ve never watched this show you’ll think I’m a huge loser for making such a big deal out of this.

On the other, if you’re a comedian or writer or whatever, you will also probably still think I’m a huge loser for making such a big deal out of this. So either way, I’m going to look like a loser here.  Why not just go for it then, right? What the hell. It’s not often we get a peek behind the curtain of a career we’ve always dreamt about.

And so last Saturday I went all in. I took in every sight, smell, sound, taste (there were free Starbursts on the table) possible. I let my mind go nuts with the dramatics and made a huge ass deal out of everything. But only internally of course, on the outside I sat on the couch and tried not to make a peep. 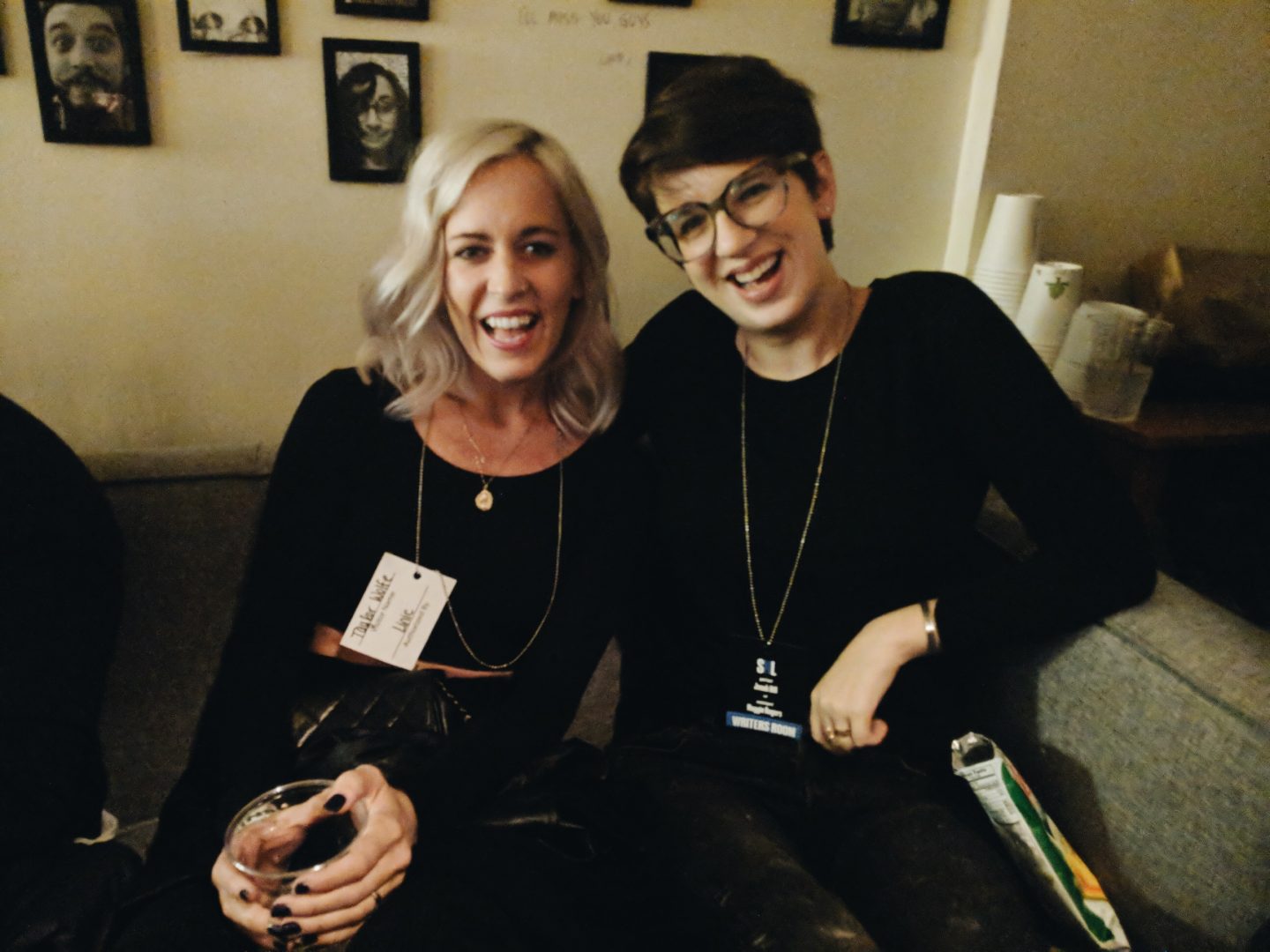 I keep repeating this to myself as more people fill the room. Some I recognize from other TV shows, some I know from seeing their standup or reading stuff they’ve written.

During a commercial break, I let my eyes wander and I notice that the writers room has small photos covering the wall behind the couch where we’re sitting. I see people who I know now from movies and think to myself, I had no idea they started here…

In the midst of my fan-girling and excitement, there’s a quick nudge of sadness that bumps into me for a second. I’m not surprised by it because I’d been politely asking it to give me space all evening. But it caught me when I let my guard down (probably when I was going for another Starburst.)

It caught me just long enough to sock me in the stomach and taunt, “you didn’t make it here…. but look at everyone else who did! Ha ha.”

I don’t say this in a boo-who kinda way, or as an attempt to be self deprecating; but in a way where I’m admitting it made me a little sad to get up close and personal with such a lofty dream of mine, and watch it being played out by people who are not… well, me.

They are people who are more talented, who are funnier, have worked harder, and quite simply deserve to be where they are.

WOE IS ME, amiright?!

NO! Not at all. Because I can’t even begin to explain how inspired and motivated I also was by the creative people I was surrounded by for those brief hours last Saturday night.

They made me want to be better. To not settle.

They reminded me to stop wasting so much time on things I don’t care about, to stop climbing my way to a place I don’t really want to be. I want to surround myself with people who are creating cool shit and doing what they love.

When the show starts to end I get the feeling like the sun is setting on Christmas day.

“It’s already over?!” I’m desperate to stretch this night just a little longer. I’m not ready to leave.

“It goes so fast when you watch it here, huh?” Claire responds.

The people around us have already gotten up; already on to the after-party, or perhaps just home. I seem to be the only person looking around this writers room as if it’s the gates to Disney World.

On our way out I try to keep my focus straight ahead, but it’s hard because to my left is Jonah Hill and to my right is Candice Bergen. If Colin Jost pops out again I may faint. (I can tell you from my two second hallway encounter with him that he is very cute and has a very warm smile. I feel like we’re best friends now.)

Before leaving, I manage to get a quick pic on stage. I try my best to be nonchalant and chill. I feel like I nailed it… what do you think? 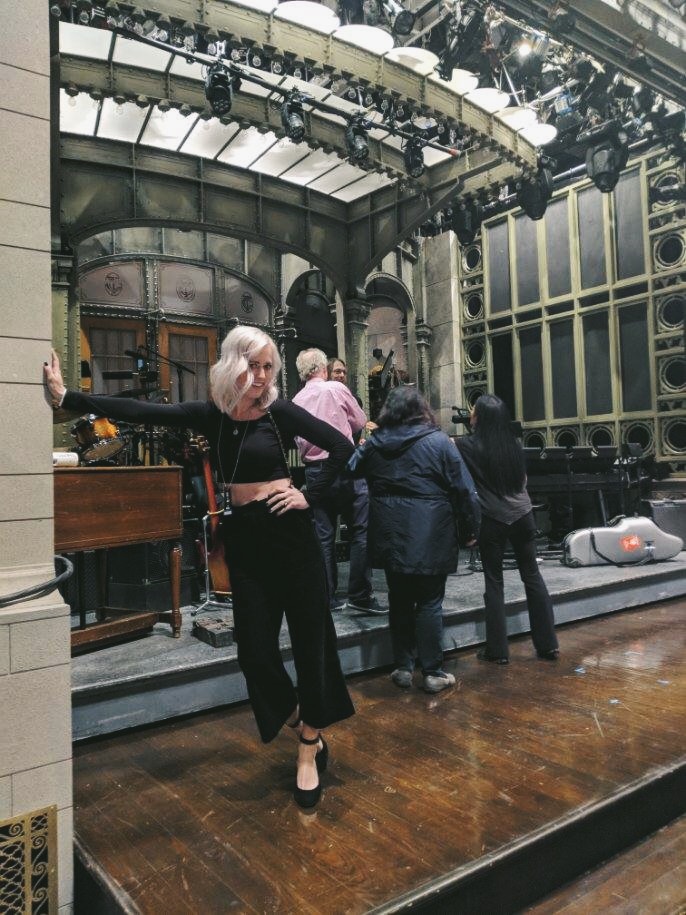 But if I could… I would tell you that I talked to literally no one, ate a full basket of chips, and watched celebs mingle from afar. Best party ever? Yes. Pretty much.

*Claire is originally from Nebraska, but she and I didn’t meet until Chicago, when we both ended up in the same improv class at iO. She has published several books, is currently working on another, her dog’s name is Oboe, and her husband writes for SNL.

**she asked me include this last part. JK!